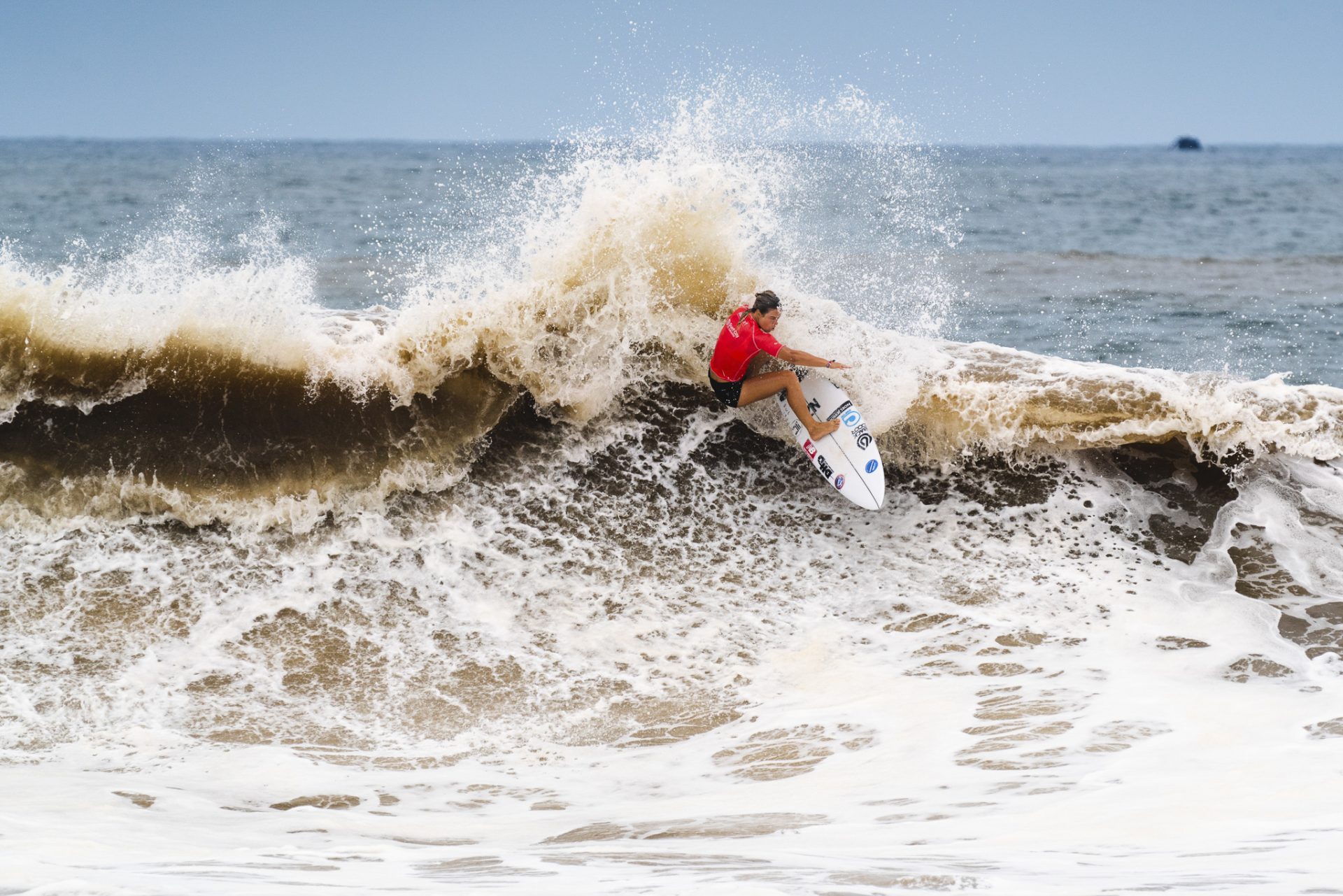 A huge turn that saw Paige Hareb free fall out of the lip on a huge left at La Bocana, El Salvador, was enough to catapult her into the Final 8 in the main group at the ISA World Surfing Games. She is now just one heat shy of Olympic qualification.

The entire Kiwi team at the ISA World Surfing Games consists of just Saffi Vette, of Gisborne, and Paige Hareb, of Taranaki, who have been fighting all this week to claim a spot in the Tokyo Olympics. Unfortunately for Saffi, her campaign came to an end this morning after she fell in her Repechage 5 round.

Paige’s campaign has been superb as she eyes off an Olympic spot for New Zealand. She won her opening three rounds comfortably – drawing on her experience surfing her favourite local break: Rockies in Taranaki.

In Round 4 Paige finished second to Portugal’s Yolanda Sequeira. In that heat Paige set up and committed to a giant turn that saw her pounce off the bottom and into the lip on a solid set wave. She free fell out of the lip and landed the turn before being swallowed up by the end section. Her turn was scored a 4.93 – the second highest wave of the heat, but possibly underscored for the level of commitment and critical elements of it. Regardless, it was enough to put Paige into second and send her through to the Round of 8.

“That heat felt good,” Paige said afterward. “I still felt a bit nervous at the end. I’m happy to finally get two waves in the first half of the heat. There’s so much water moving out there so it’s super tricky and forever changing.”

Paige will next meet an in-form Lucia Indurain, of Argentina, and Daniella Rosas, of Peru, in her Round 5 match up.

“I’m so happy to be down to the last eight in the main group, but I definitely want to keep going all the way,” she smiles. “I have to get through one more heat to qualify.”

To clarify the process from here, Paige needs to make one more heat to qualify for the Tokyo Olympics, which is scheduled to begin in two months time.

If she does that she will join Whangamata surfer Ella Williams and Raglan’s Billy Stairmand as three representatives from New Zealand who have qualified for Tokyo. They will each then need to be nominated by Surfing New Zealand – put forward as our best athletes for the Olympic Games. The New Zealand Olympic Committee will then need to select one, two or all three of them for inclusion at Tokyo’s Olympic Games.

“It’s not a given, but indications are that if Paige qualifies then we might send all three,” Surfing New Zealand’s Ben Kennings explains.

If both Ella and Paige get the nod that will give New Zealand two of the 20 women’s spots on offer at the 2020 Olympic Games.