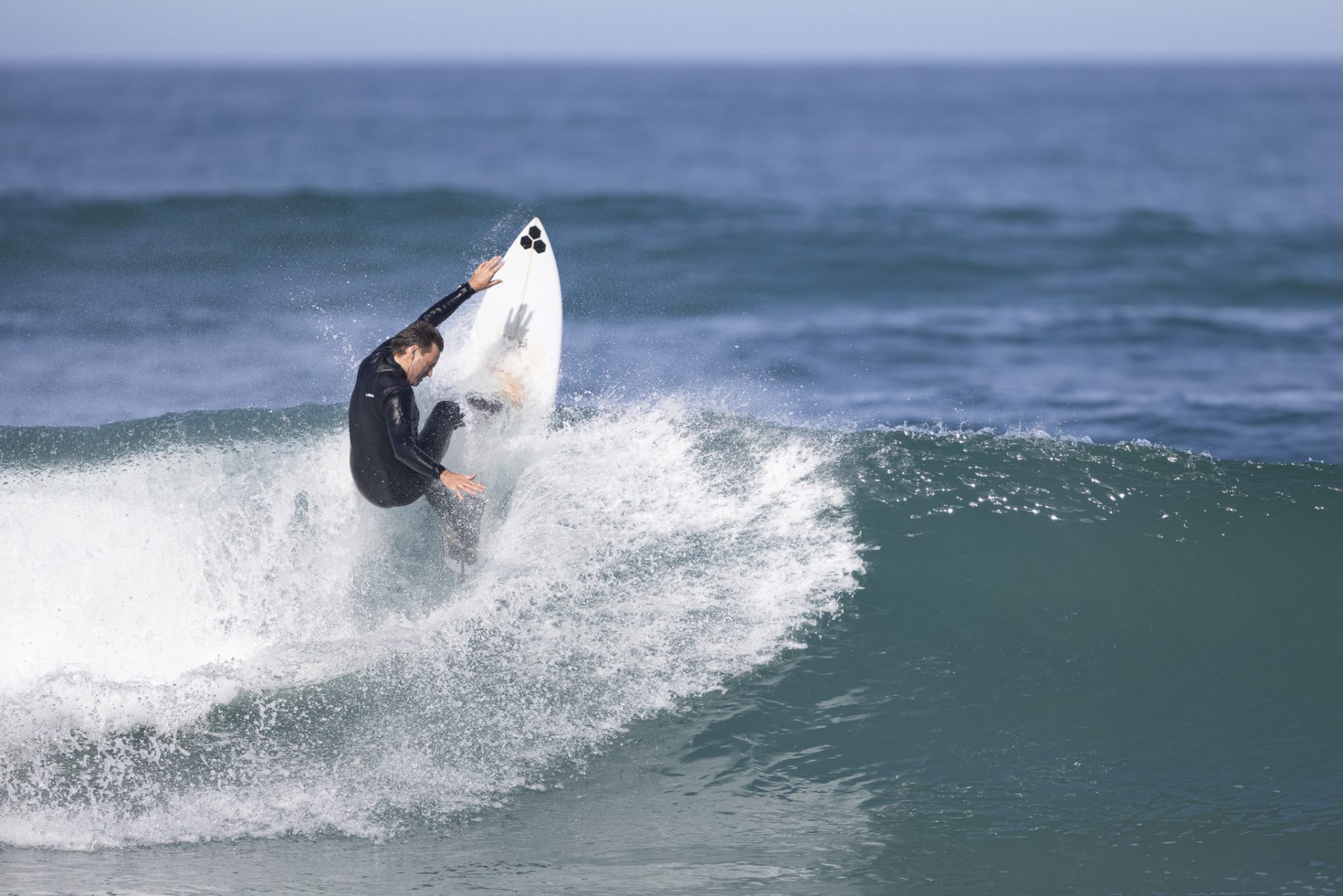 C-Skins is relatively new in the New Zealand market, but if the brand’s ReWired 3:2 chest zip steamer is anything to go by then we expect its going to play a bigger role in years to come. We put the new steamer to the test from February right into the end of April in the chilly waters of Dunedin. Here’s what New Zealand Surf Journal reviewer Lyndon Fairbairn discovered …

Straight off the bat the ReWired is something to get excited about. Designed and developed in the northern hemisphere, it features C-Skins’ proprietary Halo X neoprene, which it claims is the future of performance neoprene. It uses a face fabric that allows maximum stretch and a class-leading elastic rebound rate. The internal lining is a silk-like material championed for its comfort, stretch and warmth. Sandwiched in between, C-Skins use the limestone foam of the highest grade to ensure the suit is lightweight and flexible.

The thermal lining (red fluff) is designed to generate heat to extend your surf session in cold water, while the fully taped seams are placed to minimise paddle-stress areas. The stress points on the seams all feature additional strength areas using Xtend Fusion tape.

Entry is via an Iris II closure, using an Enigma 3 chest zip with a single cinch cord and a Super Seal Glideskin collar. The fitment is optimised through body mapping to design the seams away from high-stress areas during intense paddling. 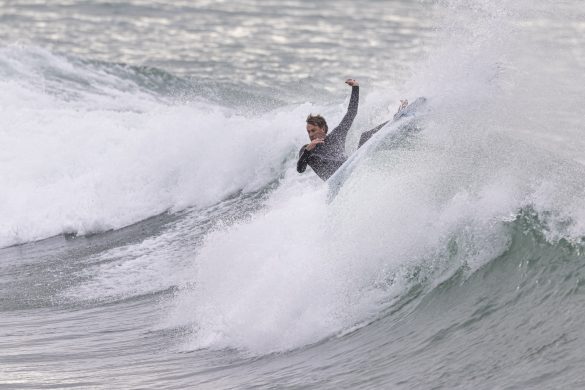 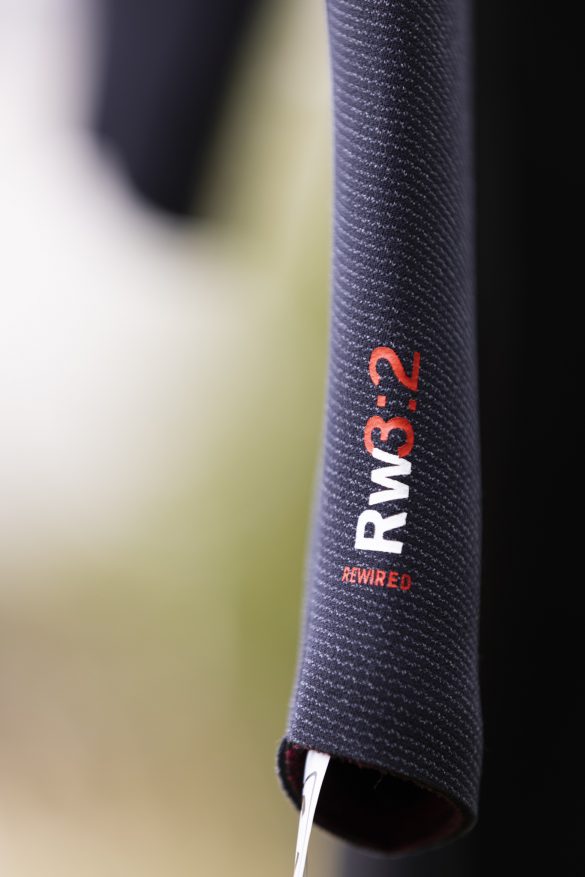 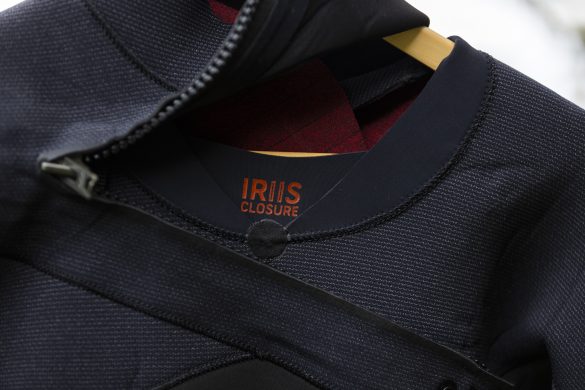 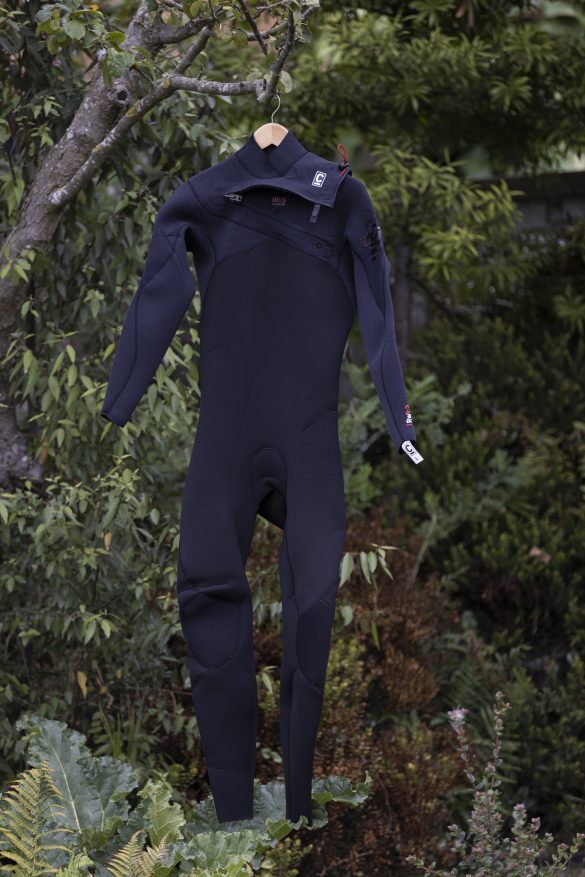 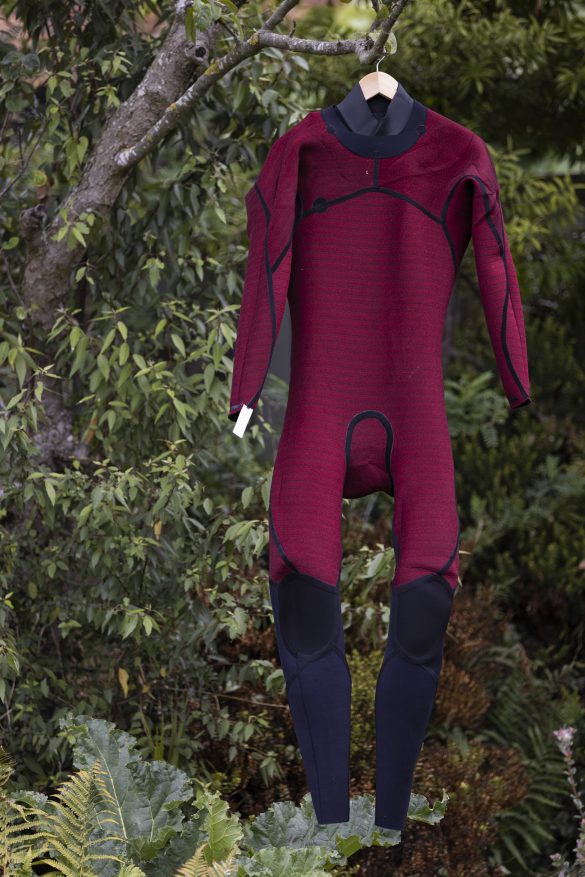 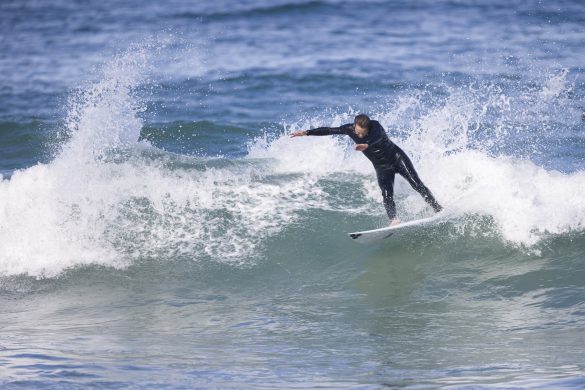 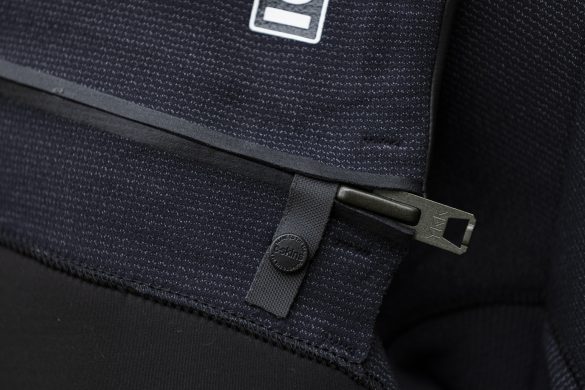 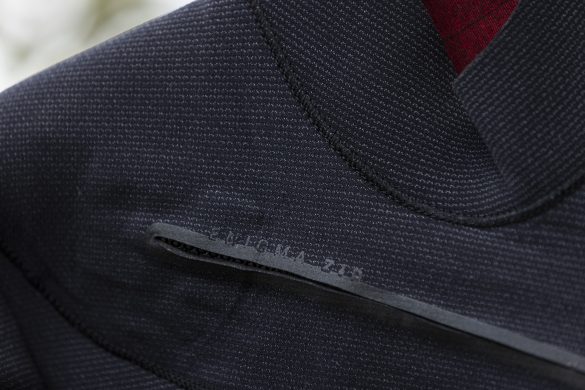 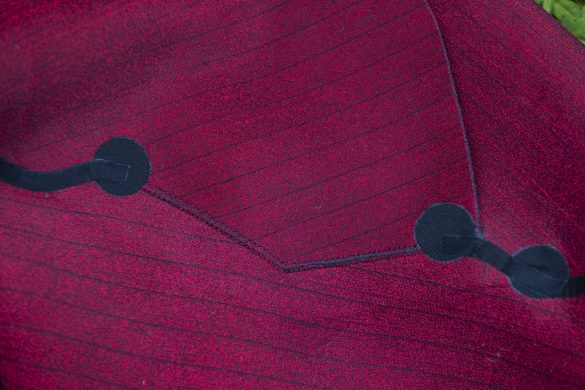 Sound like a lot of marketing palaver? That’s what we thought. But that changed on our first inspection of this wetsuit. It is clear the build quality of this suit is something special.

How would it cope in the merciless southern environment of Dunedin? At a time when water temperatures are plummeting from 16°C to 12°C? We were determined to find out.

Our C-Skins ReWired 3:2 is a size large and that fitted me really well – I would normally wear a Rip Curl in a size large, so the sizing is on par. If anything it was slightly baggy around my slightly skinny arms and shoulders. As far as build quality goes, it has all the ingredients and stood up to everything I threw at it. It has the nice red fluff inside, taped seams, and cuff seals on the wrists and ankles. The front chest zip is simple and secure. It slips on easily and everything fits smoothly. It feels snug around the neck line and really comfy.

From a value perspective it’s a definite 10 – it outperforms a suit that costs almost twice as much.

The red lining material on the inside looks similar to linings I’ve had in other wetsuits, but that is where similarities end. The C-Skins thermal lining actually feels like it gives you heat back. You’re out in the water and you’re paddling and you can feel this heat coming back at you off your back and your upper body. I haven’t felt that before with other fluffy linings. It’s a really warm wetty. That’s why I’m wearing it still now, in April, when everyone else is in 4:3s. As soon as you get going and warming up, it just feels like there is this heat being generated. That red lining goes right down to your knees, so when you’re working out paddling hard it feels like it’s really retaining your energy and giving it back to you.

Despite a little extra rubber under my arms and shoulders, I’ve never had a rash from this suit. It really has been a dream wetsuit and hasn’t once flushed on me. The zip system works really well and hasn’t been breached by water coming through the little gap that you get when you’ve got a chest zip suit. Possibly the design of the Iris II closure eliminates this. I have a Rip Curl zipperless and you can get the odd flushing in there, but I haven’t really been flushed with this one.

The Iris II neck system also makes it really easy to get in and out of. Compared to a zipperless where you can’t pull them out far enough, this is really straightforward to get into. It just slips straight on – no awkwardness at all. Getting a zipperless suit off when you’re tired and cold after a surf is quite awkward, but that’s not the case here.

I would estimate I have had more than 20 surf in it so far and I have competed in it as well. On the flexibility side of things this wetsuit is equal and comparable to that of the top shelf zipperless in a Rip Curl. That’s an $800 wetsuit and this C-Skins comes in just on half the price. The zipperless does have slightly more flexibility at the top because you don’t have a zip, but from there down everything’s parallel and warmthwise I’d say C-Skins is a bit warmer.

I’ve been wearing Rip Curl and Xcel suits for years and I haven’t really ventured past there, but this C-Skins suit has really opened my eyes. I always thought if you bought something cheaper, then you’re not getting the same flexibility – something has to be compromised, but that’s not the case with the ReWired 3:2. It’s premium-level construction at a cheaper price.

Drying wise I haven’t noticed a heap of difference, it’s as fast as my other suits, but admittedly I buy two or three wetsuits a year – as soon as they get a leak in a seam then that’s enough for me.

C-Skins is also in line with other European manufacturers and slightly ahead of the curve when it comes to building suits more sustainably. The ReWired uses recycled car tyres in the fill content of its limestone neoprene, along with dope dyeing the face fabrics to reduce energy and water consumption during manufacturing.

From a durability perspective I haven’t experienced any tape de-laminations – it still feels like I’m putting on a brand new wetsuit. I’m happy when I put the C-Skins on and I’ve been choosing it over my Rip Curl as my go-to suit for surfing – that’s saying something about what I think about it. And it’s the end of April – I wouldn’t wear my 3:2 Rip Curl now – that’s been put away in the garage and that’s the top of the line Rip Curl zipperless E6/E7 – the latest model, but not the limited-edition model in that range.

As far as warmth goes it’s seriously a solid 10 for a 3:2. I’m quite analytical with wetsuits – I’m a wetsuit snob and I always buy top of the line. This is the first time I’ve gone for something that I didn’t think was top of the line because of its price point, but it’s right up there. I’m a convert.

I really didn’t expect to be wearing a 3:2 at this time of year – I’ve just started wearing booties again as well – I actually bought C-Skins booties – I’m a convert. They felt really good, too.

Compared with the very best chest zip wetsuits on the market, the C-Skins ReWired 3:2 is right up there – it’s top of the line and it’s one of the most flexible.

Can it be improved? There’s only one small request we could make to improve this suit. From the knees down the ReWired has normal black neoprene. It’d be great if they actually had that red fluff continue all the way down. Particularly as that’s the first part where you start feeling the cold. You want your ankles warm when you’re surfing. That’s the only improvement we could suggest for this suit.

From a value perspective it’s a definite 10 – it outperforms a suit that costs almost twice as much. As far as warmth goes it’s seriously a solid 10 for a 3:2. I’m quite analytical with wetsuits – I’m a wetsuit snob and I always buy top of the line. This is the first time I’ve gone for something that I didn’t think was top of the line because of its price point, but it’s right up there. I’m a convert. 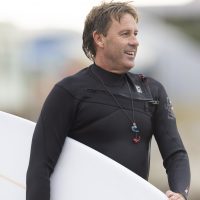 Our C-Skins ReWired 3:2 blew us away. We didn't expect such a high-level wetsuit from a brand that is so new to the New Zealand market. But when you consider C-Skins emerged to serve surfers in the Northern European waves, then it starts to make sense – our climates are not too dissimilar. The ReWired 3:2 fuses comfort with one of the most flexible chest zip suits on the market. Then it adds in a thermal lining that is some kind of magic. The lining actually reflects heat back at you. Unlike other linings it doesn't hold water, which often creates a soggy, weighted feeling in the water. Instead the ReWired 3:2 remains flexi and retains its performance from one surf to the next. We surfed this suit deep into a Dunedin autumn in water temperatures ranging from 16°C to 12°C and it out performed some of the best and most expensive suits on the market. At $429.99 this suit earns a 10 for value. Outstanding.

How To: Dial In Your Pre-Surf Stretch With Dr Oliver Farley