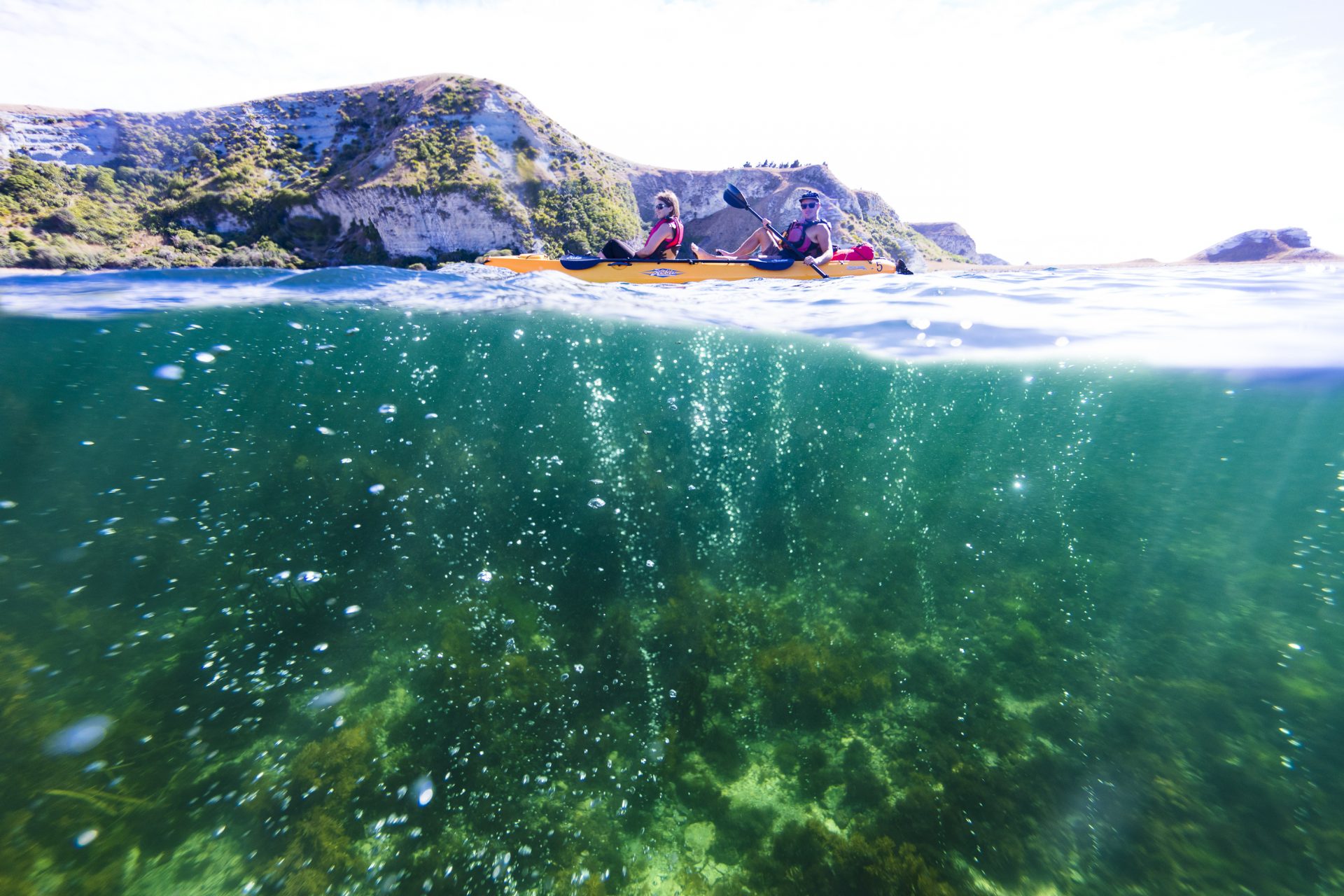 In a sheltered bay off the end of the Kaikoura Peninsula columns of bubbles spill out of the sea floor like shimmering mercury and make their way to the surface. It’s a dazzling display, like a scene that belongs in Wonderland. This is Hope Springs, aptly named, and just one of the many silver linings to Kaikoura’s 7.8 magnitude November 2016 earthquake.

“We’re originally from the deep south – right at the bottom at Colac Bay. From our house you could see Stewart Island,” he laughs.

“The Po family taught me how to surf down there,” he adds. “I started at five on a kneeboard and just got hooked from there. Colac Bay is awesome and then you have Mitchell’s – a long righthander in Riverton that is a little kid’s dream.”

Levi’s parents have always been in the jewellery industry – carving designs out of paua shell. They saw the tourism industry was a lot bigger up in Kaikoura so moved up.

“We lived in the factory shop for four years,” he recalls. “They chipped away at it and now it’s really successful. They’ve done well. Plus, it’s warmer up here and we still have lots of waves – Dad loves his surfing as well – he loves the fast righthander that is Kahutara. It’s his favourite wave in the world. Porridge was his favourite down there so he’s gone from a big left to a fast right.”

“We didn’t know what to expect – I didn’t do a tour with tourists for a month and a half,” he explains. “We just took locals out to check out the new coastline – parts of the Kaikoura Peninsula lifted up to 2m. It is pretty extreme. On the low tide there are so many rocks that we have never seen before.”

Those early explorations soon stumbled across the bubbling soda water of Hope Springs.

“One of the kayak crew discovered it and his daughter is named Hope. They’re not sure what the gas is – it’s not flammable and it’s not warm – they’re not entirely sure. It’s been going for three months now.”

Still a subject of debate, Levi reckons the lifted coastline has changed the surfbreaks for the better.
“Everywhere has risen, so all the waves are a bit shallower now. On the higher tide you can still surf Meatworks – that used to really affect it. Even when it is small the mid-tide is really fun – like it used to be at dead low. So, we can get more hours out there during the day, which has to be a good thing. Mangamaunu doesn’t seem to be so fat anymore – on those south swells it used to be a real paddle mission, but now it’s breaking out further it’s not so sweepy. It’s a lot more manageable on those south swells now.”

Possibly as iconic as Hope Springs is the emergence of a new wave at Gooch’s Beach – that is literally right in the middle of town.

“The new wave is such a blessing here in Kaikoura,” offers Levi. “We’ve had no future surfers coming through and now with that beach rising right in town we have a perfect learning wave. Any north swell and it breaks about knee high in waist deep water. The kids are frothing on it. We were down there last Sunday and there were about 50 kids in the water with all these beginner boards. That’s such a good thing for Kaikoura. We’ll have a whole new generation of surfers coming through. We used to surf it when we were younger, but then it just stopped working. This new wave is way better than it had ever been.”

Further exploration was still required, admitted Levi, particularly along the coastline to the north on a decent swell.

“I’ve seen a few nooks and crannies down south – a few interesting slabs with rocks lifting up, which looks very promising. We haven’t been able to explore right up north much just yet with the road being shut off and access discouraged with the helicopters working dumping water on the slips to try to bring them down. I’m sure that day for a good explore will come soon – I’m looking forward to it – you just never know what we might find.”

When he’s not chasing waves Levi is immersed in his business and fleet of Hobie kayaks, that are unique in that they have pedals to propel the kayak through the water. This leaves your hands free.

“It’s cool to have the Hobie kayaks – something different that no one else has in New Zealand,” he shares. “They’re so easy to pedal and we have this amazing coastline, seals and wildlife. You never know what you’re going to see out there – we have penguins, dolphins, whales – Kaikoura is amazing really.”

“The month after the earthquake was really surreal – it was so quiet,” he admits. “But the government helped out with its earthquake package and that made a big difference. With the south road being opened again we are starting to see travellers return, the locals are starting to get the smiles back on their faces and back into the groove of things again. We’re a bit worried about the winter, but we just have to take it as it comes and try to make the most of it.”

It seems making the most of each day is probably Levi’s strength.