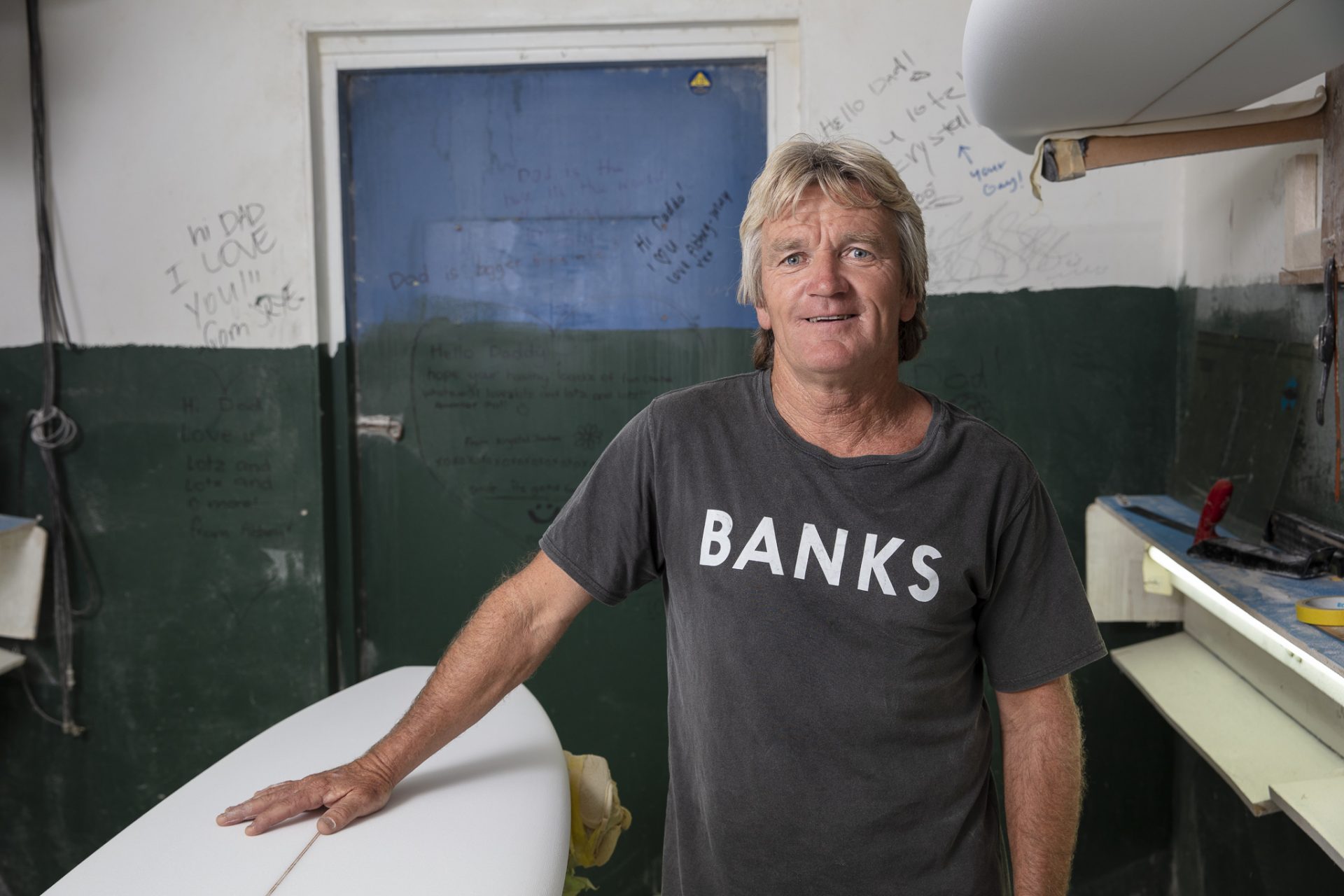 Renowned Mount Maunganui-based shaper Andy Jordan will soon bow to a strong call from the Land of the Rising Sun and move to a “forgotten” Japanese island to live.

The veteran shaper has crafted an extraordinary 7330-plus “AJ” boards – short, long, twin fins and all the rest, over about 20 years from a modest factory in a back street of the Mount industrial area.

But the long-time Mountie reflects that he remains keen to get in the water every day and he still has some “surfing and travelling” to do.

Japan’s allure has been pulling Andy across the Pacific for some years.

He first visited the nation of many islands in 1990 with a New Zealand surfing team, but in recent times, with his Japanese partner, Keiko, who surfs, he’s been going back annually.

“I’ve been over the last five years alone to the same spot.”

“Before that I went about four times as well to the main island to visit her folks and go travelling. She is from Shonan, just south-east of Tokyo, quite a famous surf spot, but pretty average waves and very, very crowded.”

The pair are preparing to head next May to an island chain north of Okinawa.

“It is a little bit of a forgotten island – not many people go there,” he adds, of the island that is only about 100km long with a population of only 50,000.

Andy and Keiko found their island, not from Google Earth or a map, but rather one of Keiko’s old surfing magazines with an enticing pull-out poster of an idyllic surf break.

“I was just ‘wow, where’s that?’” recalls Andy. At the time the pair were travelling the main island and surfing “and I said ‘let’s go there.’”

The mountainous island can get good surf in both the typhoon and winter seasons and Andy has worked hard to hunt out the best breaks, and pay his respects to the locals who surf them.

“You have to spend quite a bit of time there before you work out where to find the best surf at the right times,” he notes.

“Most of the Japanese surfers that go down there on holiday usually stay at places where they’ve got surf guides that take them surfing. You can miss out on a lot of surf if you don’t know where to go.”

Aside from the island’s obvious pull, Andy Jordan points to some “push” reasons for leaving the Mount.

He cites Mount Maunganui’s crowded surf and traffic congestion and family circumstances – four daughters who have their lives “sorted” – as he puts it – and don’t need their father around so much anymore.

Andy reflects that all his favourite surf spots, where they scored “amazing waves” – from The Island, Whakatane Heads, the Motu Rivermouth, other East Cape breaks – now all get crowded.

“No one used to really surf them much,” he explains. “Places like The Island were where you used to go to get away from people. It is now more crowded than The Mount.”

He loved surfing Indicators at Raglan, but that’s crowded now, too.

“Places like The Island were where you used to go to get away from people. It is now more crowded than The Mount.”

“I’m not happy because of all that,” he says, indicating a combination of factors that includes rising business rents.

“And then every time I went back to the Japanese island then returned to the Mount, all I could think about was going back there,” he laughs. “It’s real ‘country’ over there …”

It is 90 percent bush and really mountainous, beautiful countryside, and “the water’s warm all year round,” another strong point in favour of the island life, he offers.

“I thought I’ve ten more good years of shortboard riding left and I don’t want to waste it here at The Mount. I still want to challenge myself and, with Keiko, we can.”

The pair will build a simple house on the island.

“I’m going to build a house four metres by eleven metres with a deck around it. Just a square box. It will have a sloping roof with a three metre deck around it – open living inside, pretty simple.”

Andy plans to build the shaping bay on the side of the house after making a few boards taken over from the Mount for people on the island. He plans to work with a Japanese friend, a local born and bred who owns a surf shop on the island.

“I thought I’ve ten more good years of shortboard riding left and I don’t want to waste it here at The Mount. I still want to challenge myself.”

But he’s not chasing the sort of big money that Hawaiian shapers have traditionally commanded on visits to Japan.

“I’m going there to not work so much,” says Andy, explaining that he hopes to work only a couple of days a week. The cost of living is pretty cheap, their property will be freehold and they’ll be receiving an income from renting their Mount Maunganui home.

In addition, the locals are not particularly wealthy, so if Andy can do one shaping job a week he will be “stoked”. There is also a “bit of an opening” in providing a fast ding repair service.

“I still want to chase the waves,” he insists. “When the typhoon’s on you’ve got to do a little bit of driving.”

“One day if that’s the island,” he says gesturing at an imaginary map, “you’d be up here, the next two days you could be down here about an hour away surfing this left. All of a sudden over here … depends on what’s happening because you surf everywhere.”

The waves can be of excellent quality ranging from just one beachbreak to a rivermouth and “the rest of it is either coral or volcanic rock. You can get grated on them …”

The main beach has a reef and that gets crowded – but not in Kiwi terms – “with 15 to 20 guys on it and they’re all locals and so you’re always at the back of the line.”

But a hundred metres further along is another spot where the crowds are mellower.

The legendarily polite Japanese can be “quite fierce” out in the lineup, says Andy.

“It’s their spot – they’ve got bosses, you know? You need to show respect and you do get told off if you’re out of line. I’m a Westerner so back of the line.”

“It’s their spot – they’ve got bosses, you know? You need to show respect and you do get told off if you’re out of line. I’m a Westerner so back of the line.”

But when the surf jumps in size it can become a lot less crowded. Andy has also observed that a lot of Japanese also seem to head for the spots that are easy to access.

Andy is well aware of Japanese cultural traditions and shows the locals lots of respect.

“They’ve got to know me and my age helps too – I’m older than all of them except one or two.”

“I have doors opened to me a lot because of my age,” smiles the 56-year-old. “When they find out, they are way more friendly and respectful, which has been quite a godsend really.”

Mount Maunganui’s loss of one of its best respected shapers and surfers, will be Japan’s gain.

Andy is typically modest about the hole he will leave on the local surfboard-making scene but “if you want a Jordan board you’ve still got a few months to order one,” he says with a smile.

Dividing his time between Papamoa and the Coromandel, Grant is a veteran freelance journo, writer and editor with an outdoor focus – surfing, cycling and snow skiing in roughly that order. He co-authored New Zealand Surfers with Luke Williamson and has been “endlessly” planning more books on surfing ever since. His writing credits include the Bay of Plenty’s first guide book, The Best of Tauranga. Grant’s background includes hunting surf on islands off Hong Kong and claims his mates in the Hong Kong Surf Club (it was a thing!) named a break after him. As part of an “endangered sub-group,” Grant still rides a custom kneeboard when the surf is hollow enough.