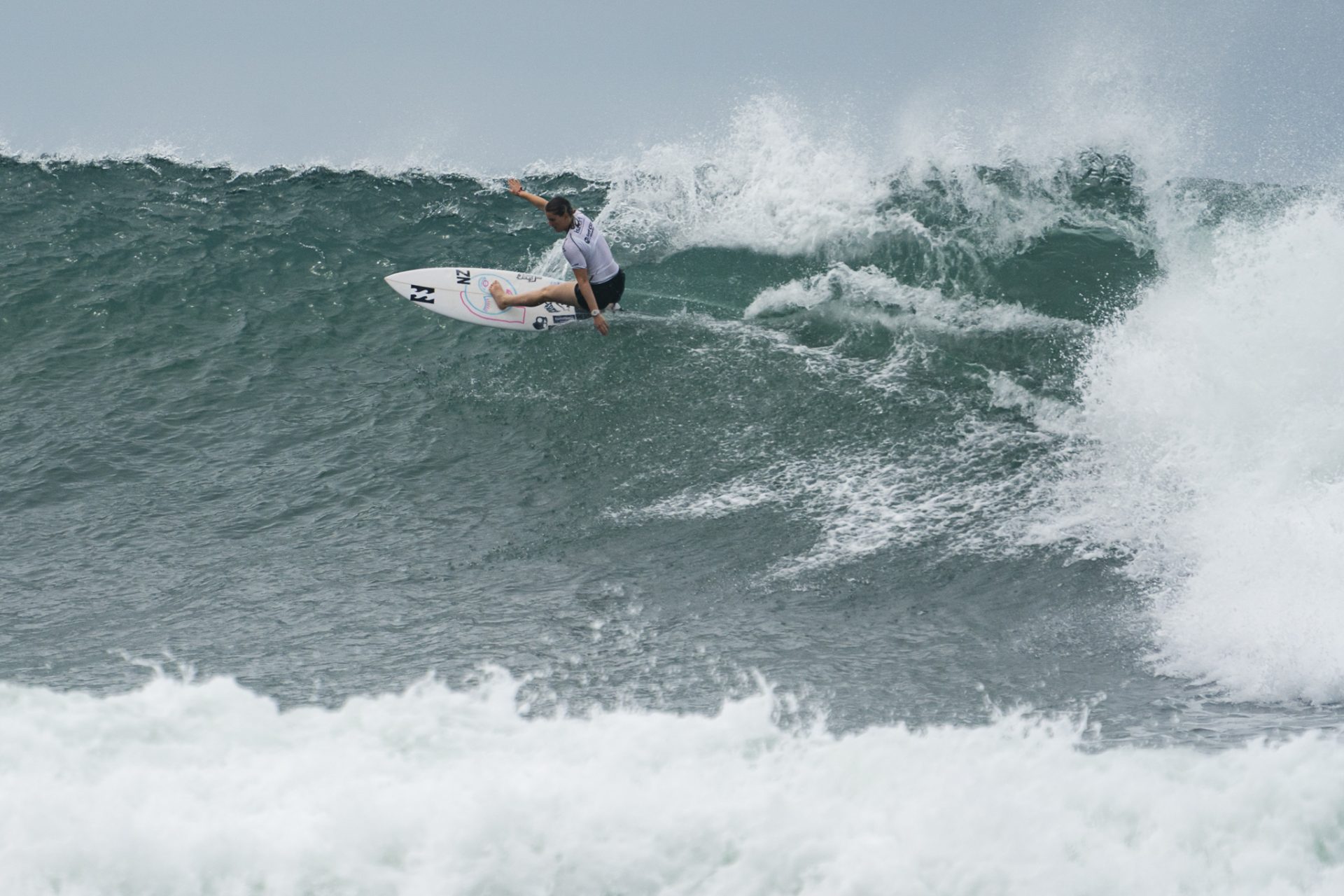 Surfing in the 4th heat of Repechage 5, Saffi and fellow WQS campaigner Ellie Turner, from Great Britain, were bettered by Carolina Mendes, of Portugal, and Delfina Morosini, of Uruguay. That ends Saffi’s ISA World Surfing Games, but there are a lot of positives to draw from her journey in 2021.

Saffi opened her account with a second in her first encounter, bettered only by Chile’s Lorena Fica. She then went into Round 2 up against her teammate Paige Hareb.

Paige took early control of their Round 2 heat and Saffi struggled to find a backup wave and sat 1 point adrift of second. Fans back home in New Zealand watched with their heart in their mouths as they ate breakfast and tried to wrestle with Saffi’s situation. With 24 seconds to go Saffi paddled for a final wave that gave her a canvas to extract a 3.83 – enough to be the second-best wave of the heat and enough to take her through to the next round.

“Let’s hope for no more heart attacks,” she laughed afterward. “I’m pretty calm and collected in those situations, but I intend to avoid them at all costs.”

The swell has been building all week and each day the line up has been getting more and more challenging to read.

In her Round 3 heat Saffi just didn’t look to be herself and fell to the in-form Argentinian, Lucia Indurain.

Saffi only managed to find one wave in the heat.

“I didn’t give myself any opportunity so I didn’t get any scores, which resulted in a loss. Lots of learning, which is epic, but hopefully I can pull off some Repechage heats now.”

A simple strategy was what Saffi hoped to employ for the remainder of the contest.

“I’ll just try to keep busy and stay on my feet,” she said. “Keeping busy puts scores on the board so as long as I do that and not put any added pressure on myself I’ll be okay. I know I surf just as good as anyone I just need to find the right waves.”

Saffi went on to finish second in her Repechage 4 round.

“That’s a good feeling, but I knew I could perform better, so round 3 I was pretty gutted,” she admitted. “I’m hoping to really open up in my next heat and show I can actually puts some scores on the board.”

But Repechage 5 would be her last outing and the end of her campaign. To put this contest into context you have to consider the plight of some of the WSL stars: Tatiana Weston-Webb, Brisa Hennessy, Caroline Marks and Carissa Moore all dropped out of their Repechage 2 heats. Defending World Champion Sofia Mulanovich also exited early in her Repechage 3 heat.

“Yeah, I’m gutted – I just didn’t get the waves I wanted,” Saffi concedes. “I didn’t start great at all, which I like to do – usually just to get the ball rolling!”

“I’m feeling super proud of myself,” she adds. “I came here to compete and I had a chance at the Olympics.

“It was an opportunity, I took it and ran,” Saffi smiles. “I gave it heaps and at the end of the day I didn’t lose, I gained more experience.”

From here she’ll extract the learnings from this pressure-cooker style of event.

“The event has been fun,” she smiles. “Super different, but the set up is amazing and I’m very stoked to be here at this historical event.”

Traveling with Paige has also been a highlight for the young surfer.

“It’s been super fun with Paige,” Saffi explains. “She’s a teenager at heart! She’s still young, but she’s 11 years older, so honestly she just feels like a big sister. She’s super determined, but bubbly and fun in our downtime. We both respect that we need quiet time sometimes so we work pretty well as a team.”

Paige Hareb now heads into the Round of 8 tomorrow morning.

“I am Paige’s number one supporter and hoping she can go all the way,” Saffi said.

Derek MorrisonJune 11, 2021
June 11, 2021
The World Surf League announces the updated calendar for the remainder of the...