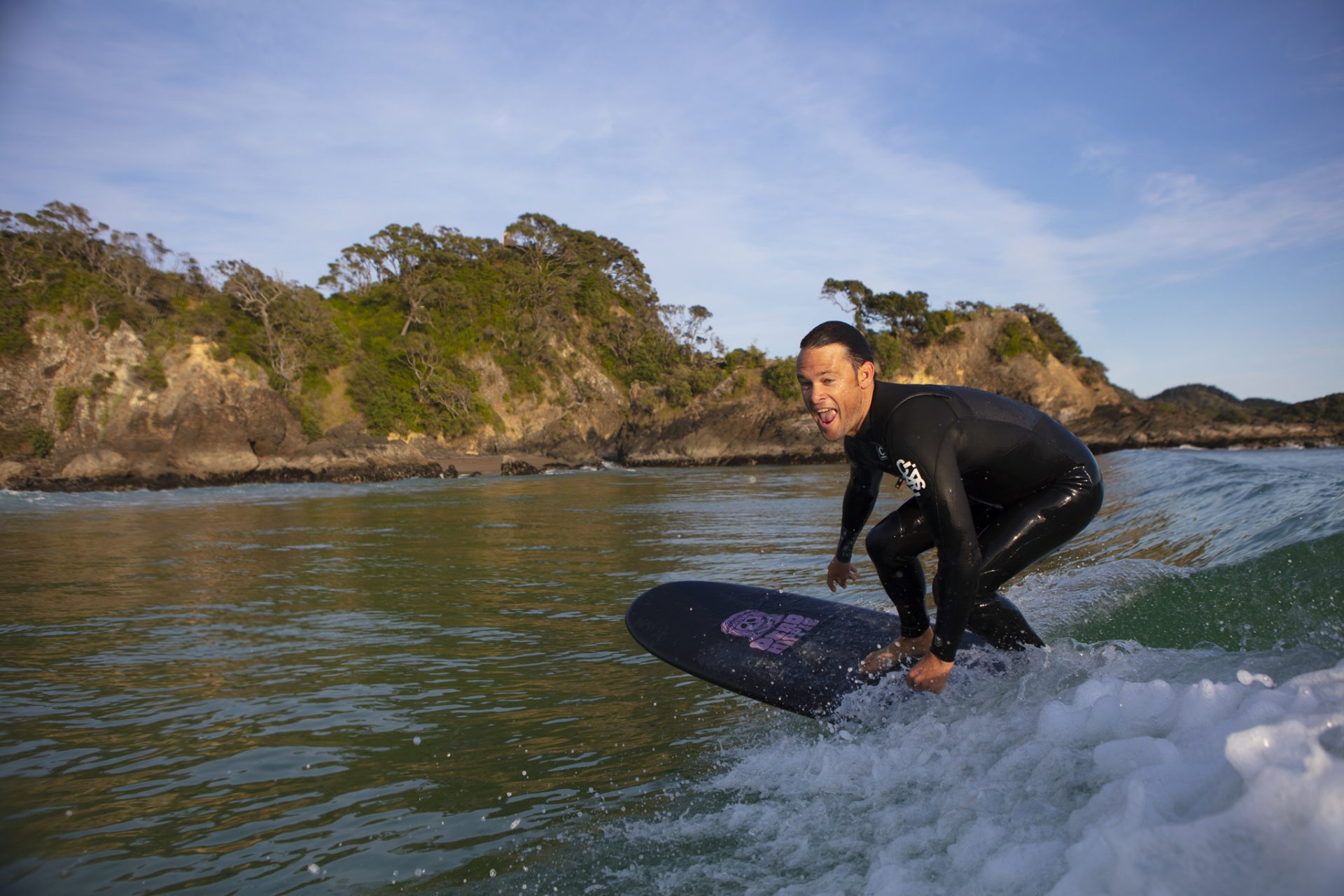 From Waste Plastic To Surfboards: Three Kiwis Lead The Way

Momentum for the environment may be building painstakingly slowly within the surf industry, but not for the three New Zealanders driving Spooked Kooks recycled surfboards out of Bondi.

It was during a morning session at Sandy Bay, that I had my first encounter with a Dead Hippy. It was under the feet of Simon Egginton, of Tutukaka Surf. He’d take off on this black top foamy, extend and compress up to full speed before burying the rail on the Dead Hippy in a full roundhouse cutback right in front of me. Wait, what? Yep, surfed on rail … on a foamy.

“They’re a completely different concept,” he tells me with a big grin after I accosted him about the board. “They’re the only softboards that are made from waste plastic. They’ve just recently been stamped with approval from Sustainable Surf.”

“They’re a little bit more refined – not as chunky and fat as other types of learner softboards,” Simon adds. “So as you saw you can still do a turn on them and you can do a cutback on them – it’s probably as close as you’ll get to a fibreglass board.”

“They’re a completely different concept. They’re the only softboards that are made from waste plastic. They’ve just recently been stamped with approval from Sustainable Surf.”

He tells me the feeling of catching waves completely guilt free is what resonated with him when he first discovered the brand and the concept on social media a few years back.

“I love the little saying: ‘no hard feelings’ – it’s their catchphrase,” he laughs before paddling into another wave.

“Tom and I met at Piha when we were about 7,” shares Rupert. “His parents moved around a fair bit when he was young, but kept their place out there. My mum lives on Marine Parade North.”

They quickly realised that for their concept to have a chance to thrive they needed to relocate to Australia. They chose Bondi in Sydney, which Rupert described as “ground zero for foamies”.

They initially set out to simply make a product out of waste. The foamy trend was just great timing. But it has been spurred on by beaches around the urban centres of Australia’s East Coast restricting areas to just softboards. Bondi is one of them.

“Last year in October I was surfing at Snapper and there was a dude on a foamy with no fins,” recalls Simon. “People are starting to choose them as opposed to when I first started coaching, it was more of a thing that you just taught on.”

Simon, who also runs Tutukaka Surf School, which has been in operation for 11 years, admitted they had snapped a few foamies in that time.

“It’s always kind of a waste isn’t it? I mean, once you finish with them there’s not really much you can do with them. I really like the idea that they’re doing something like this.”

The boards owe part of their performance advantage to the design, which features two bamboo stringers running side-by-side from nose-to-tail.

“That makes them super rigid,” offers Simon. “They don’t have any flex in them, which is a good thing. They’re a little bit weighty, but I actually think the weight sort of helps them get down the waves and into the pocket.”

Simon explained that the Spooked Kooks boards used a normal surfboard blank, which was then cut for the stringers.

“The plastic is collected from the Philippines – collected from coastal communities and then taken and made into molds,” Simon continues. “So the communities get money for collecting the plastics, but the places where they source the plastic can be changed. It could be Indonesia, or another place, but at the moment the Philippines has a major plastic problem. I don’t think there will ever be any shortage of it – not in my lifetime anyway.”

Simon, who is the distributor for Smoothstar in New Zealand, liked the concept so much he has become the agent for them in New Zealand.

“A friend of mine was doing it in Portugal and I found out through him that there was no one here doing them,” explains Simon. “It’s my first summer doing it, so hopefully it goes well. I think it has got a really good selling point and I think more products, not just surfboards, should be made from waste plastic. There’s too much of it.”

“So it’s got a good price point and you’re buying something that makes a difference,” smiles Simon.

He said some of the early feedback he’d had with Spooked Kooks was that they were similar to other brands of softboards that were already on the market.

Rupert said they had given a couple of boards to Mischa Davis last year.

“She’s been riding them for like a year or more,” shares Simon. “She’s living up in Whananaki and riding the Dead Hippy and a few other boards.”

The ethos from the Spooked Kooks team is that this is only the beginning when it comes to turning trash to treasure.

“We’re really keen to keep experimenting with ways we can make the boards more sustainable and ways we can improve the manufacturing and supply process to minimise impacts,” offers Rupert.

“We’ve just been endorsed by Sustainable Surf Org and have partnered with SeaTrees – we plant a mangrove tree through SeaTrees for every board we make to mitigate the environmental impacts of manufacturing and shipping the boards. We’re keen to continue in this direction.”

“We plant a mangrove tree through SeaTrees for every board we make to mitigate the environmental impacts of manufacturing and shipping the boards.”

Thinking about end of life, we ask Rupert if the boards themselves could be returned.

“We did offer this as a service in our pop-up store in Bondi and we tried to incentivise people to return their expired boards by offering a 10 percent discount on their next board purchase,” he explains.

“So far, we have not received one single expired board to be recycled, up-cycled or repurposed etc,” he shares. “What this demonstrates to us is that we can’t place the burden on the customer or end-user to return products to be recycled at the end of their life (as the reality is that this doesn’t happen). Instead we should focus on making a product that is as sustainable as possible to begin with and as durable and fit for purpose as possible.”

He said a lot of products were advertised as being “recyclable”, as opposed to being made using recycled materials.

“The reality is that only a fraction of what is created gets recycled,” Rupert reveals. “Sadly, most of our waste ends up in landfill or is off-shored.”

With brands like New Zealand’s own Organic Dynamic and Barron Surfboards and international leaders like Firewire and Jon Pyzel casting their attention to sustainable materials and sustainable surfboard production, we may just see the tipping point. Possibly even an end to the global surfing industry’s dire environmental impact. Let’s hope so. But, that will come down to you.