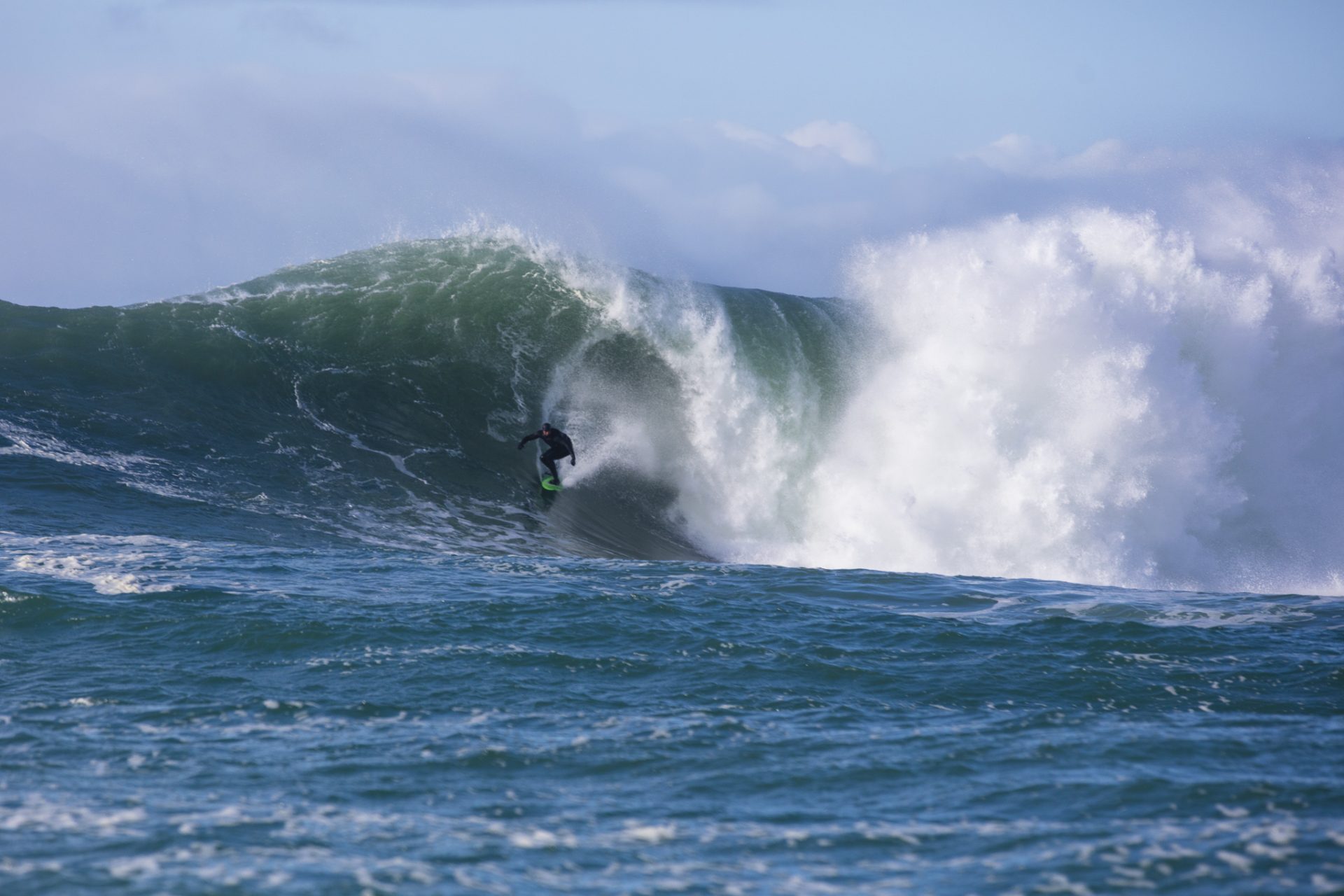 Doug Young, Dan Smith and Dave Lyons target an unruly wave on the edge of a reef during the last storm of the season.

The ingredients were this: two 180-degree south swells, both 4m at 14 seconds, a west southwest wind that may drop to 20 knots, if we’re lucky, and a crew of five bouncing between fear and excitement at what may turn up the next morning.

Four days earlier I had called Dave Wild, who I team up with to shoot big-wave adventures with. He answered the phone and immediately knew what the call was about. “I’ve seen it, the ski is ready,” he confirms.

And with that simple conversation the cogs swing into motion. A few days later Doug Young calls me and we start to pinpoint our target waves. Doug’s got so much experience to draw from – he has chased some of the world’s ugliest and most amazing waves throughout his career. He calls the spot – the conditions may be perfect for it.

“It’s going to be so on,” he tells me his voice filled with an infectious energy.

We have checked this wave many times, but have never seen it working properly. I have seen it from land on days when nobody would want to go out there. But I’ve seen enough to be curious about it.

For Doug the swell is timed perfectly within his teacher holiday period. But for all of us we know it may be one of the few and probably the last big swell of the season.

The night before we watch the swell jump from 2-foot to 8-foot at St Clair. Snowfall a day earlier was the first signal, but it wasn’t until the waves started breaking clear over White Island the evening before that I knew we were in for something special.

In the early morning light we meet at our launch point. The sun is up, the day feels good apart from the roar of the ocean and sets breaking way out into the ocean. My wife had seen the swell from our home and was nervous. That made me nervous, too. Dave seemed to be equally concerned, but also sharpened for the challenge that lay ahead.

Doug just wanted to get out there. Dan Smith and Dave Lyons – both very experienced big-wave surfers, seemed cautious. There is an element of fear that sometimes gets suffocated by the excitement on surf trips like this. Not this time. The fear was at the surface. I didn’t even know if we’d get out. Dave wasn’t sure either. But then we’ve all built up, one way or another, to a point that we can handle what lays ahead.

Those layers of experience – especially for Doug – and the systems in place, they make a difference. If it all goes wrong we’ll be drifted out to sea while it is in a state that can’t be accessed by any boat or helicopter. We’d be on our own. We have a plan for that.

We gingerly make our way out of a bay that fills and exhales with each set like the lungs of this coastline. Our path is blocked by a looming set. It gives us a shoulder and we exploit it. We’re out the back feeling successful, but the next set seems bigger and we just get over it.

The two swells, the 180-degree angle and the strong southwester give the waves these big broad tessellated shapes. Like small hills rolling beneath us as broad and lively as they are tall. The trek to our destination is with the wind and surprisingly mellow. Then we reach the reef and the water movement around it is a jumble of cross-hatching – we’re pushed way outside our comfort zone. It seems like an eternity until we reach the lee side and a wedge of wind shadow that offers slightly more promise. The hills are covered in snow, we’re frozen and we’re floating in a rugby field-sized arena hoping the wind will abate.

Across the reef roll some seriously menacing waves. They’re strewn with aeration from the draw of the reef and explode with a boom as they hit the second corner. A three footer casually blocks the escape route on one that would have otherwise been makeable. Very few are.

Then a bigger set hits and offers a wall. The five of us hoot and stare into something we cannot gauge the size of. The wind keeps cranking through. In my mind I think the mission has failed. We watch for 30 minutes. In a gust of wind the tide shifts, or we convince ourselves the wave is surfable. It’s starting to take shape. I have seen it before. A wave going from hideously unrideable to almost perfect with a .5m of tide change, a drop in wind, some positive energy from the assembled gallery.

Dan decides to go first. Doug lines him up on a cautious approach that we’re all grateful for. He drops in and fades back into the wave just enough to learn the lie of the reef. The eruption behind him less of a concern than the water draining back toward him off the shelf.

He pulls off and Doug swings in for a pickup, but misses him. The next set looms and Dan is sucked back in toward the impact zone. He scrambles over a wall that has a face of at least 20 feet, he narrowly avoids getting sucked over the falls. Doug doesn’t miss on his next attempt.

They take a breather, regroup and make another run as a bigger set looms. Dan lets loose the rope and rides into half a dozen waves in the range from terrifying to frightening. This is the edge. None of the waves are simple. It’s raw and brutal. Air temps around 5°C and water temps around 9°C. The ocean state is somewhere between a 6 and a 7 on the Beaufort scale. If it wasn’t for the team around him, I’d be worried for Dan’s life. We all are.

Dan pulls deep into one of the better looking waves, drives down the face and disappears behind the shoulder for a few seconds. He pops out and realises his inside fin has been ripped out – the fin plug wrenched from the board. We’re still not sure when it happened. Maybe he scuffed the reef? Hit a bump at speed? Maybe it happened during a pickup? We’ll never know.

It cuts short a session that was filled with equal parts promise and dread. There’s frustration on one hand, relief on the other. But none of us are looking forward to the trip back to the launch area – directly into the wind and swell.

We pick a path through the maze, slamming and bashing the skis into the oncoming chop and swell. The short distance takes three times as long as usual and we nearly get blown off several times. Eventually the launch bay comes into view. Doug, Dan and Dave slip in ahead of a looming set. It catches Dave and I out and we do our best not to get caught inside. We power over a feathering wall 100s of metres out. Dave swings and guides us between one all the way in through the tiny keyhole that our bay now appears to be.

Landing the ski is the greatest feeling ever. Two feet on terrafirma and all the crew in good health, bonded again by an adventure that none of us will ever forget in an ocean that allowed us, against the odds to sneak in and take a look at the waves at the edge … and to sneak back again. 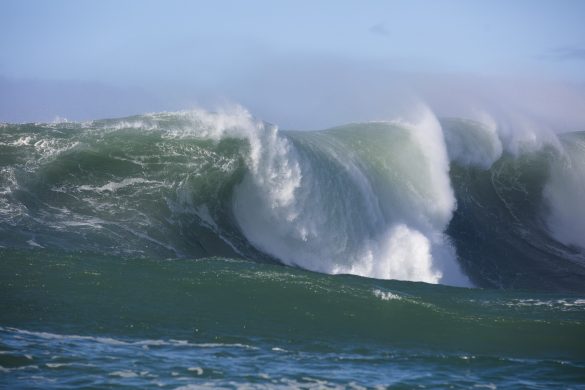 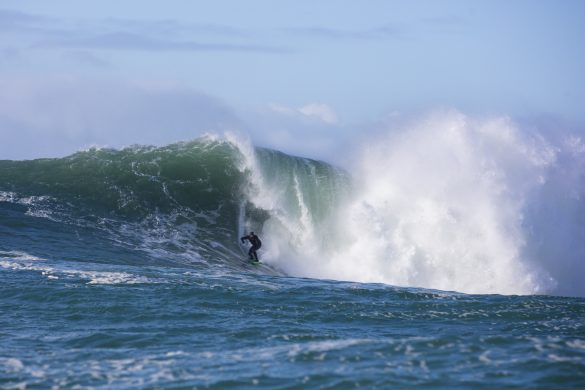 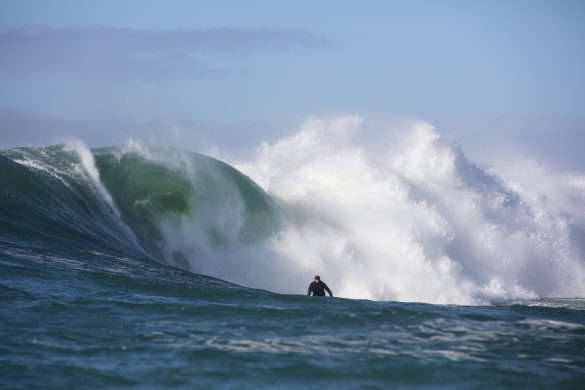 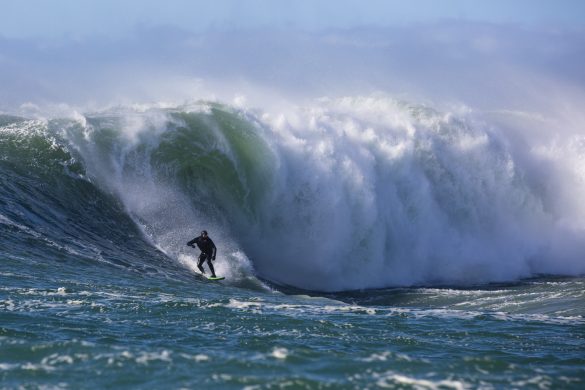 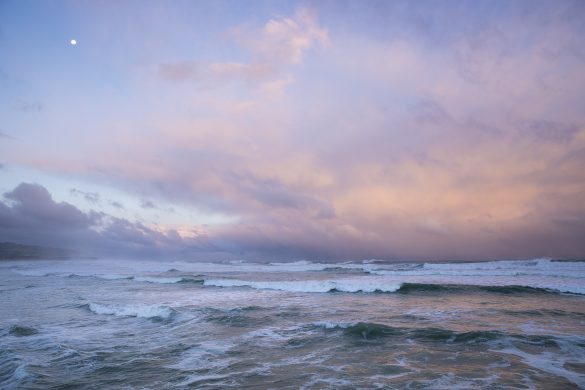 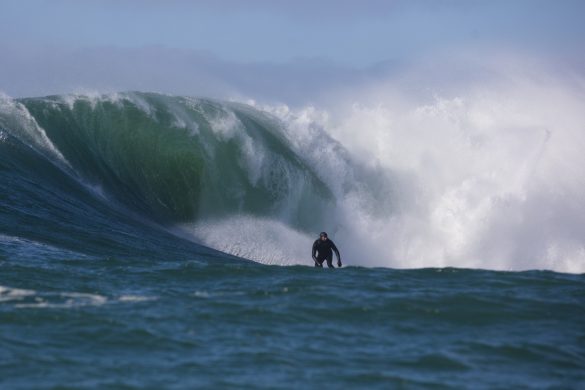 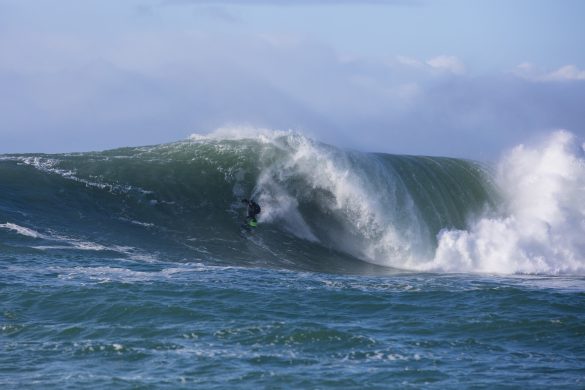 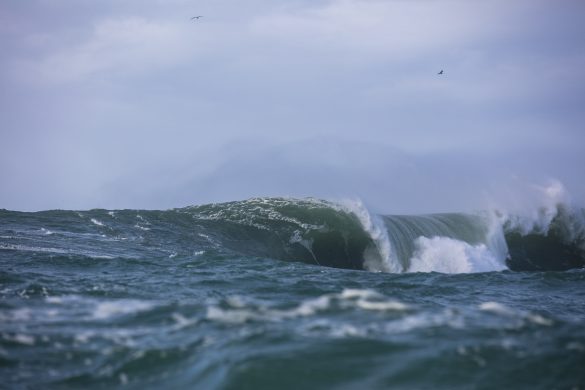 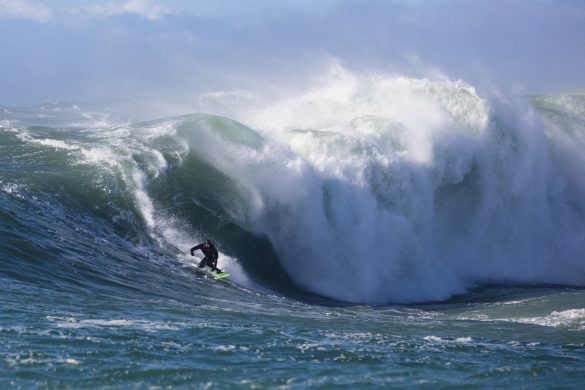