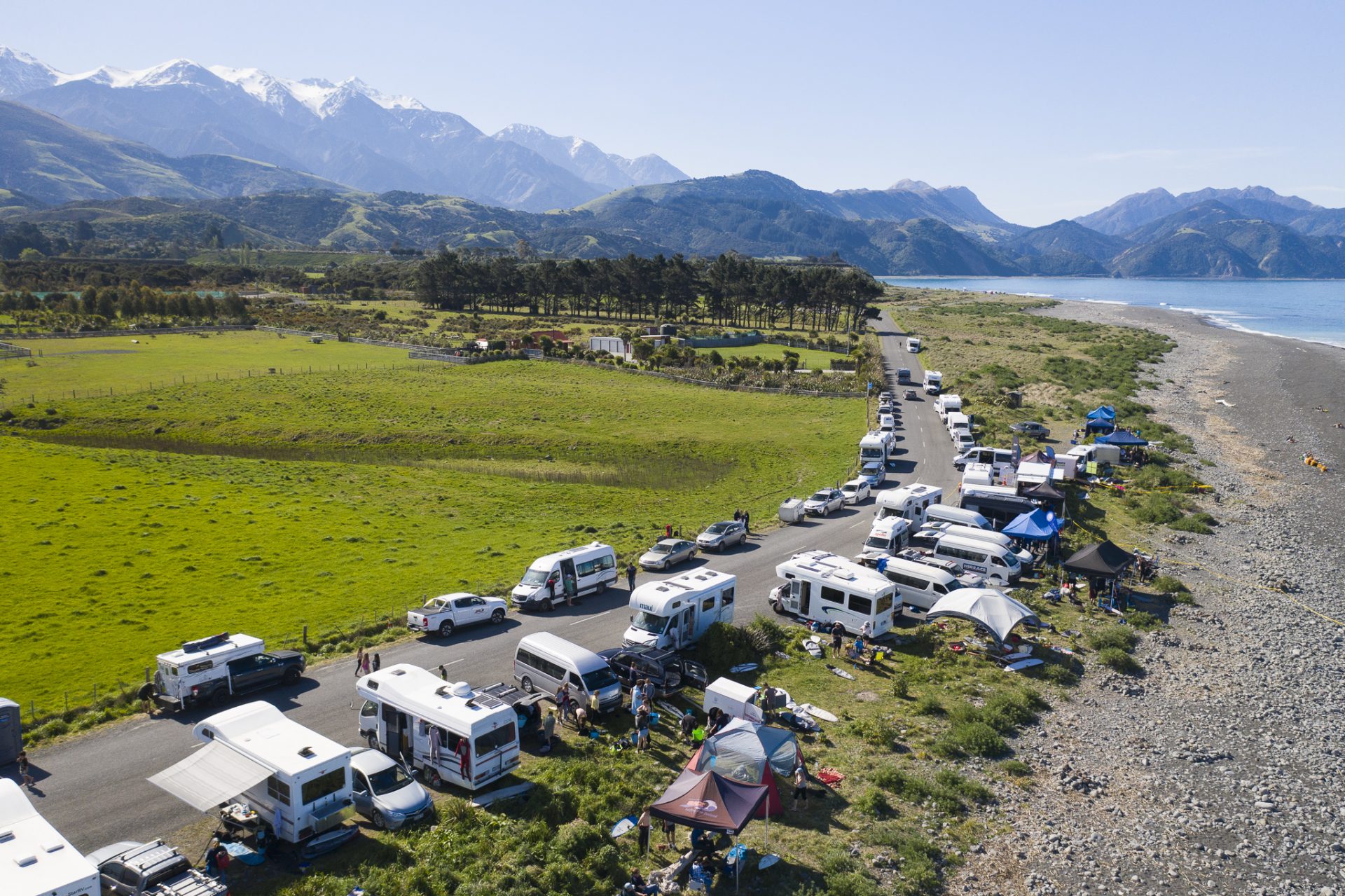 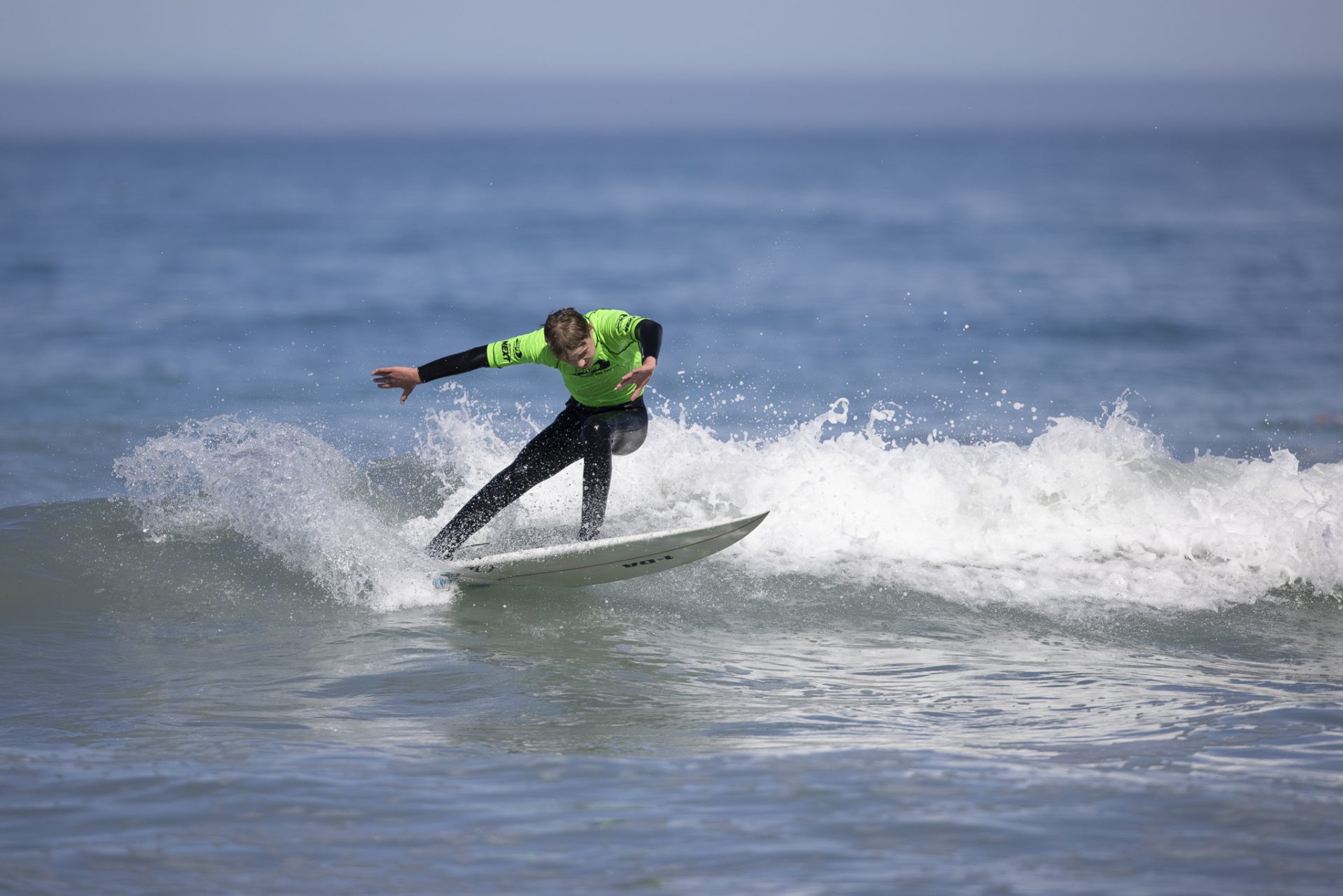 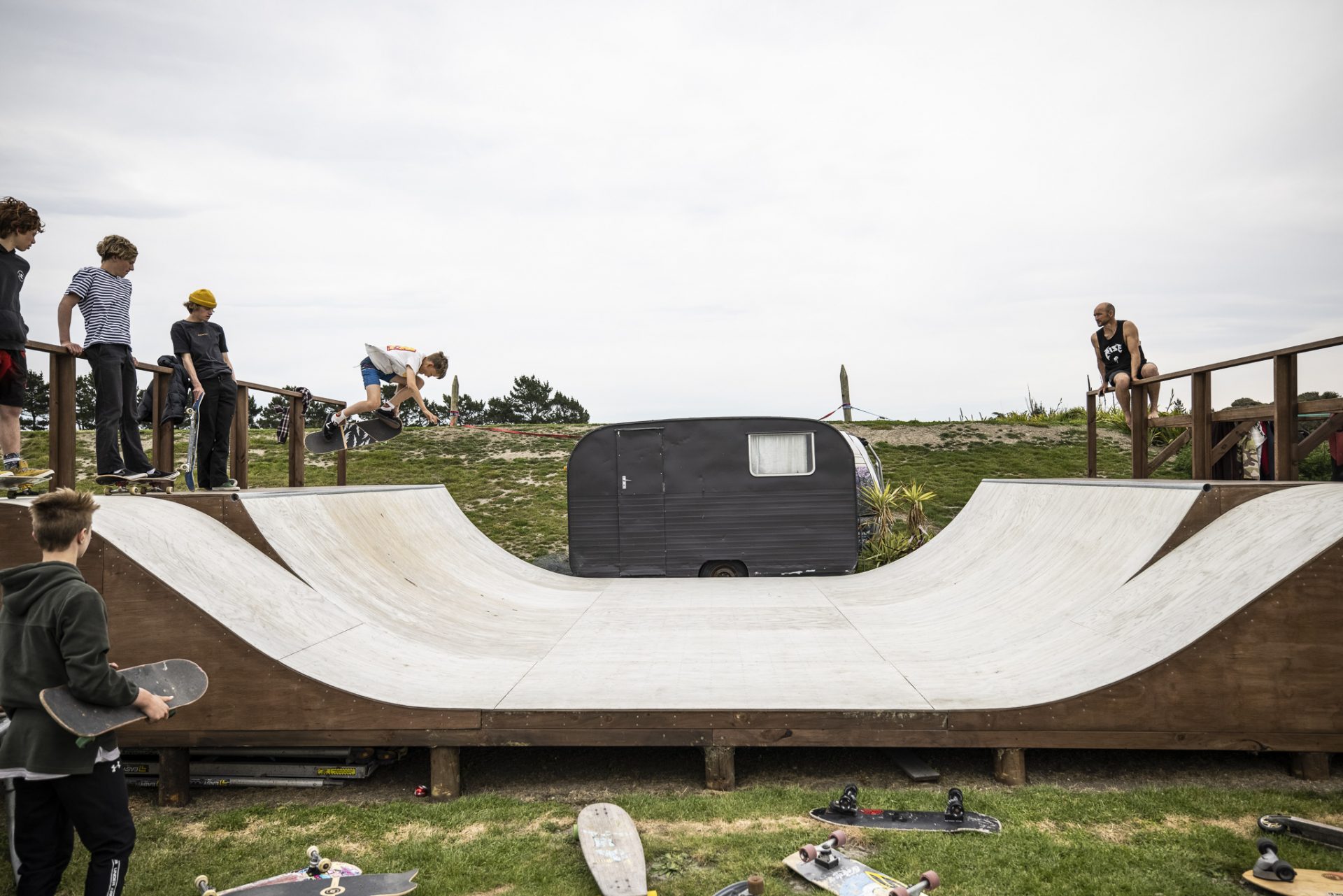 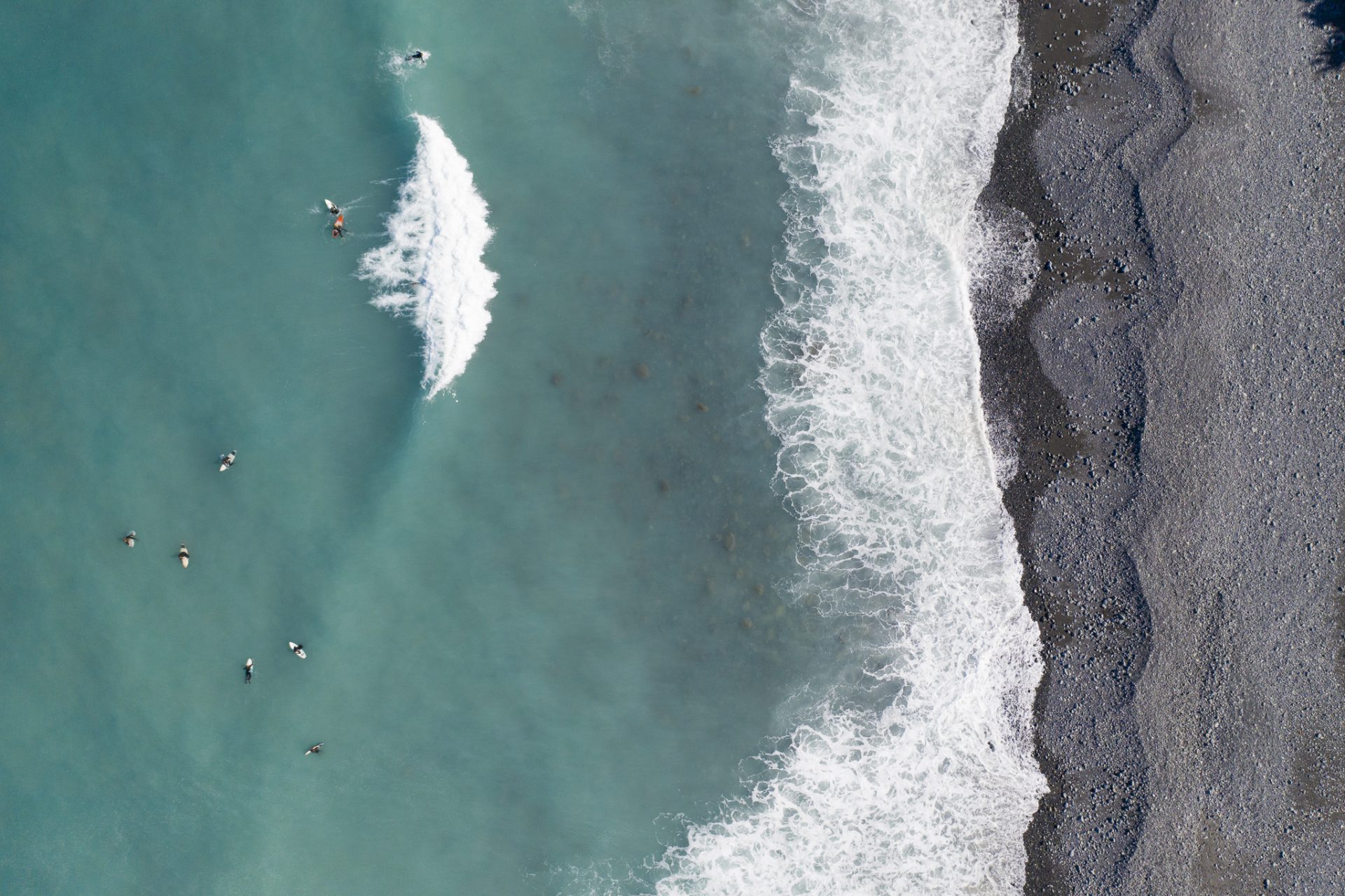 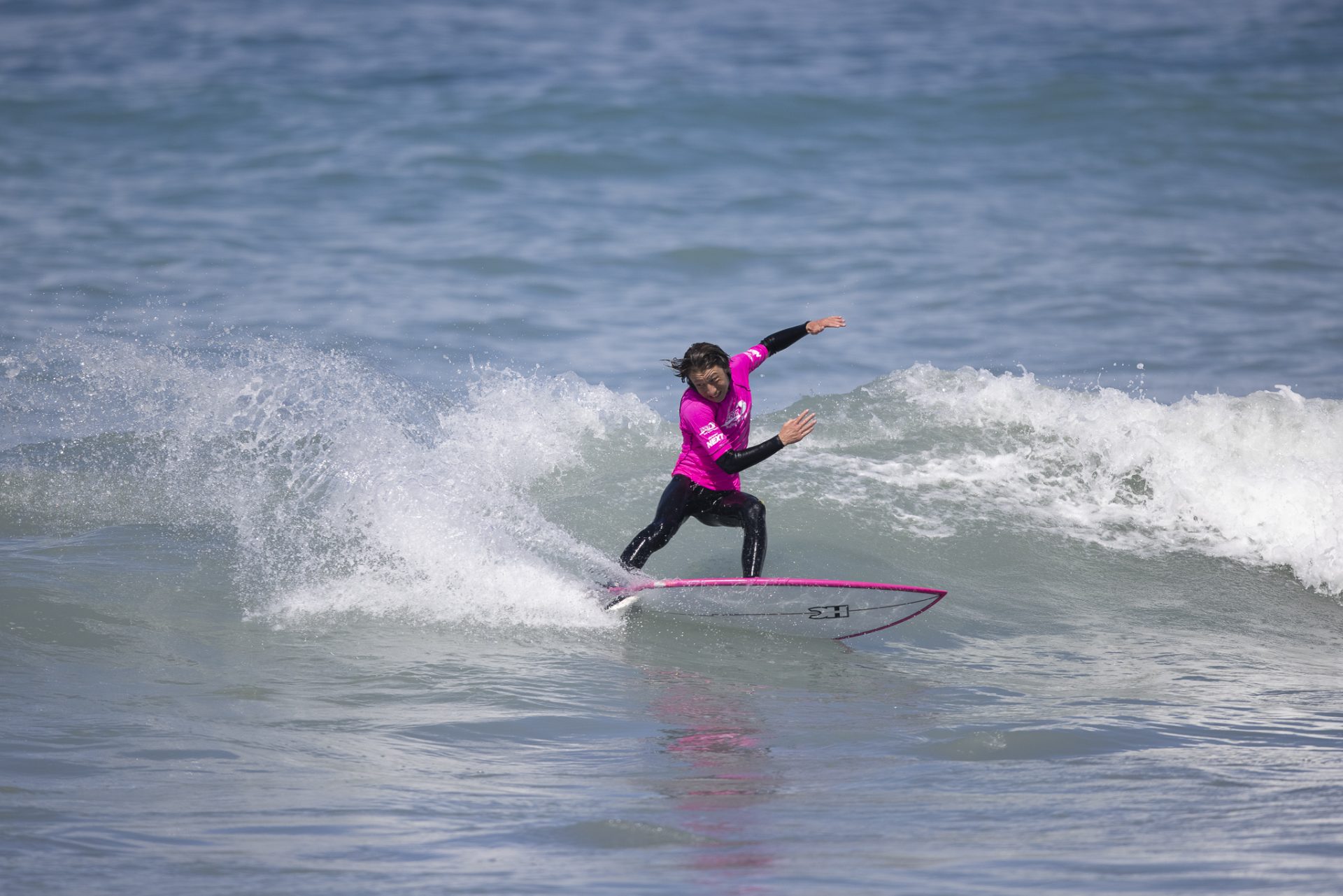 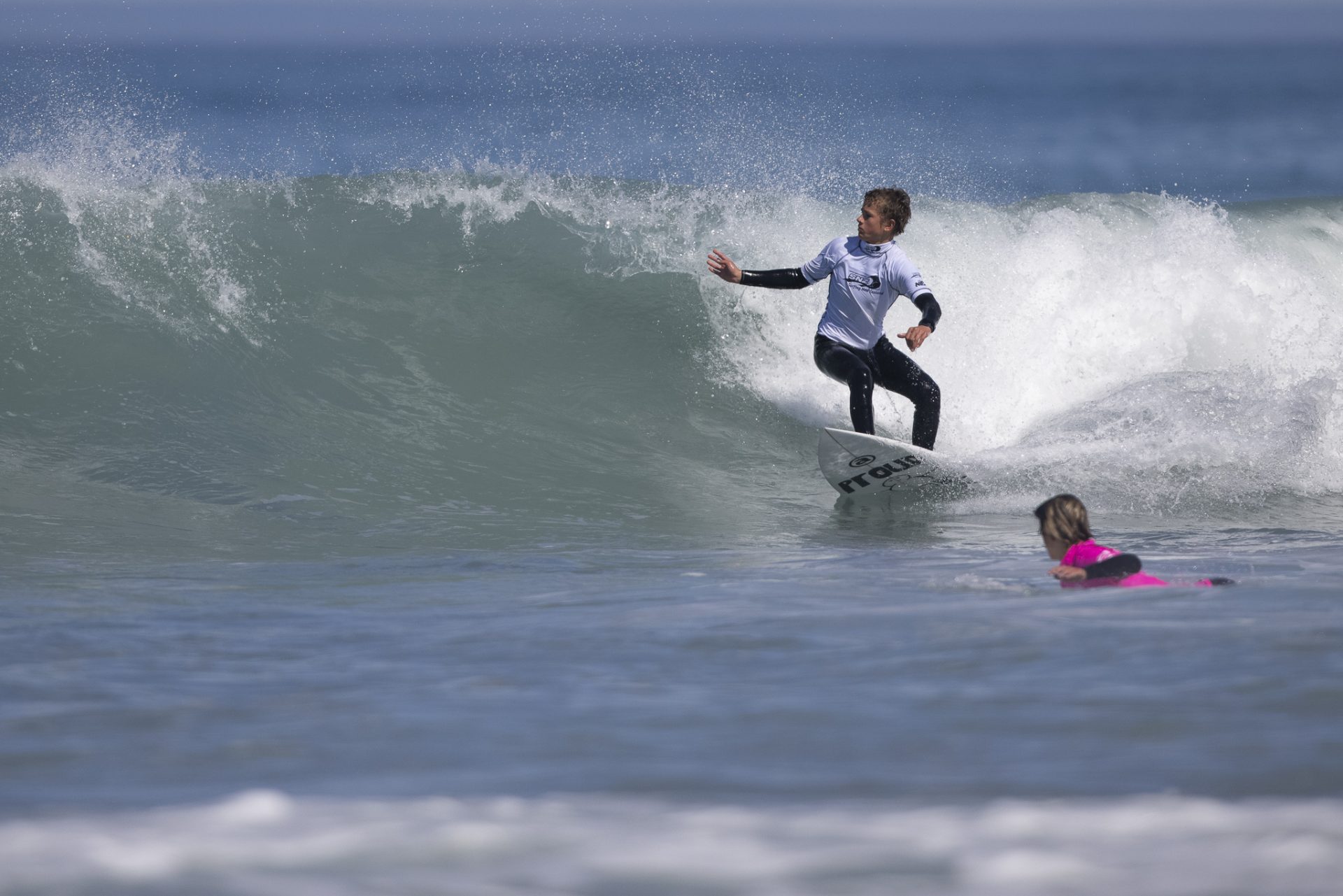 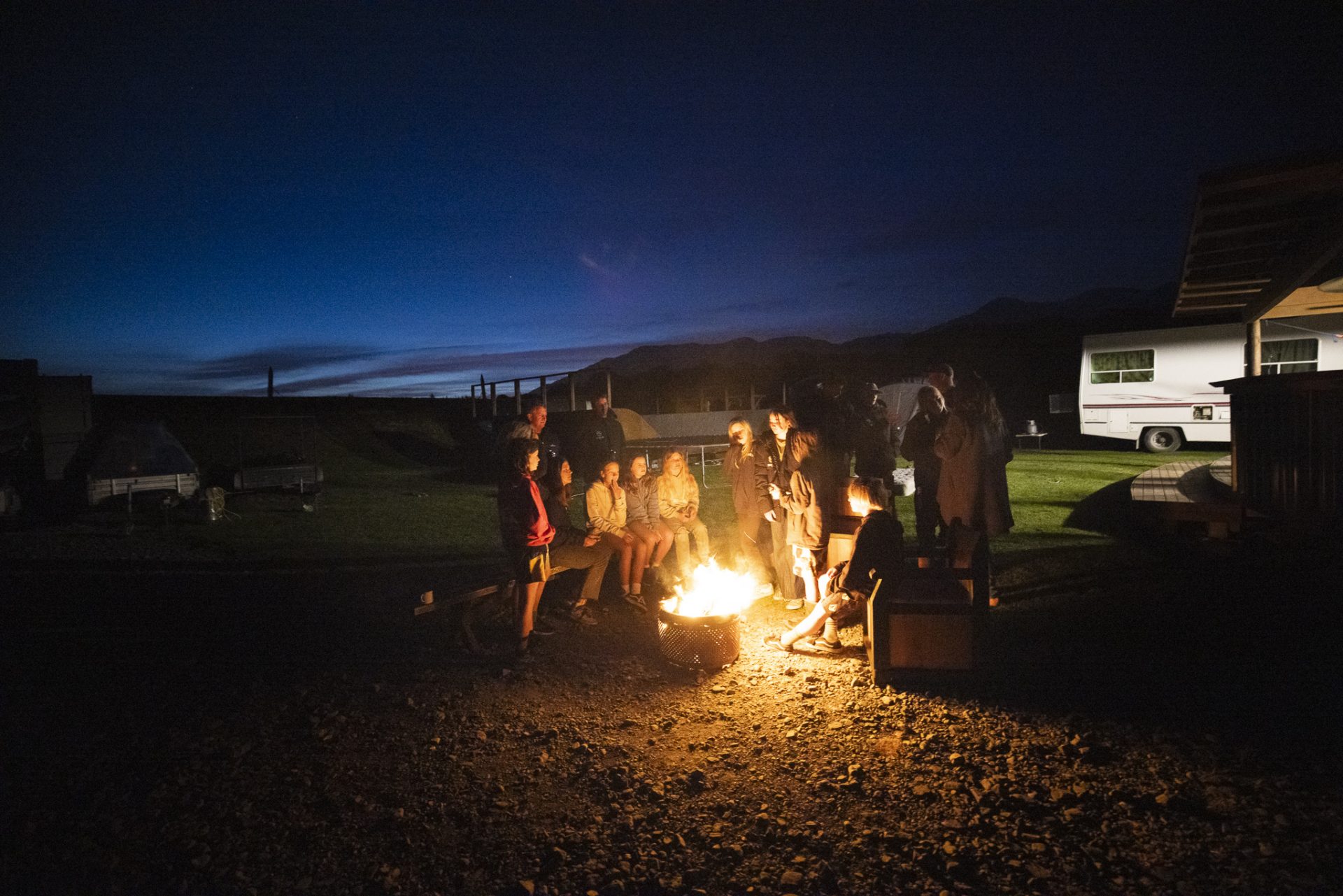 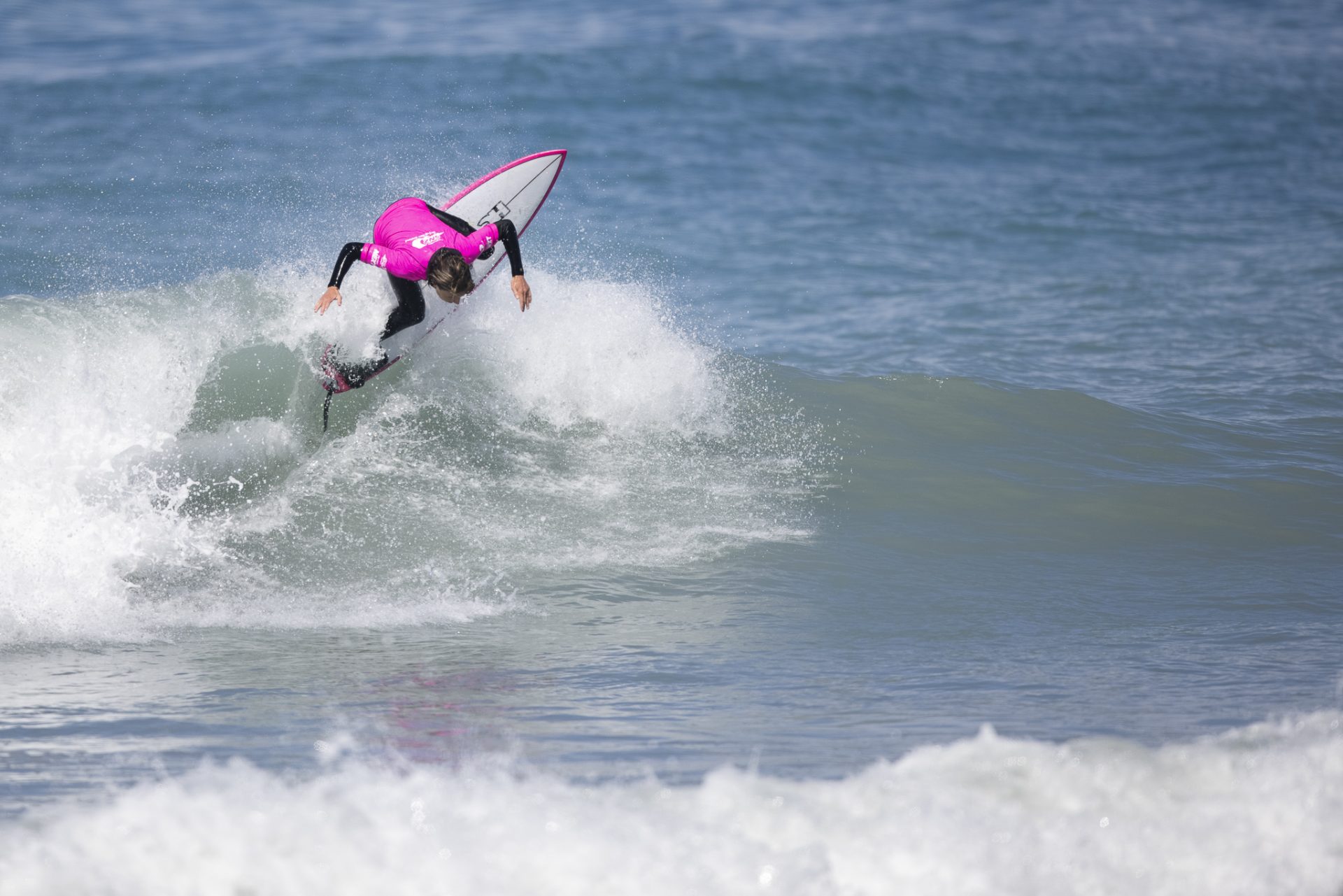 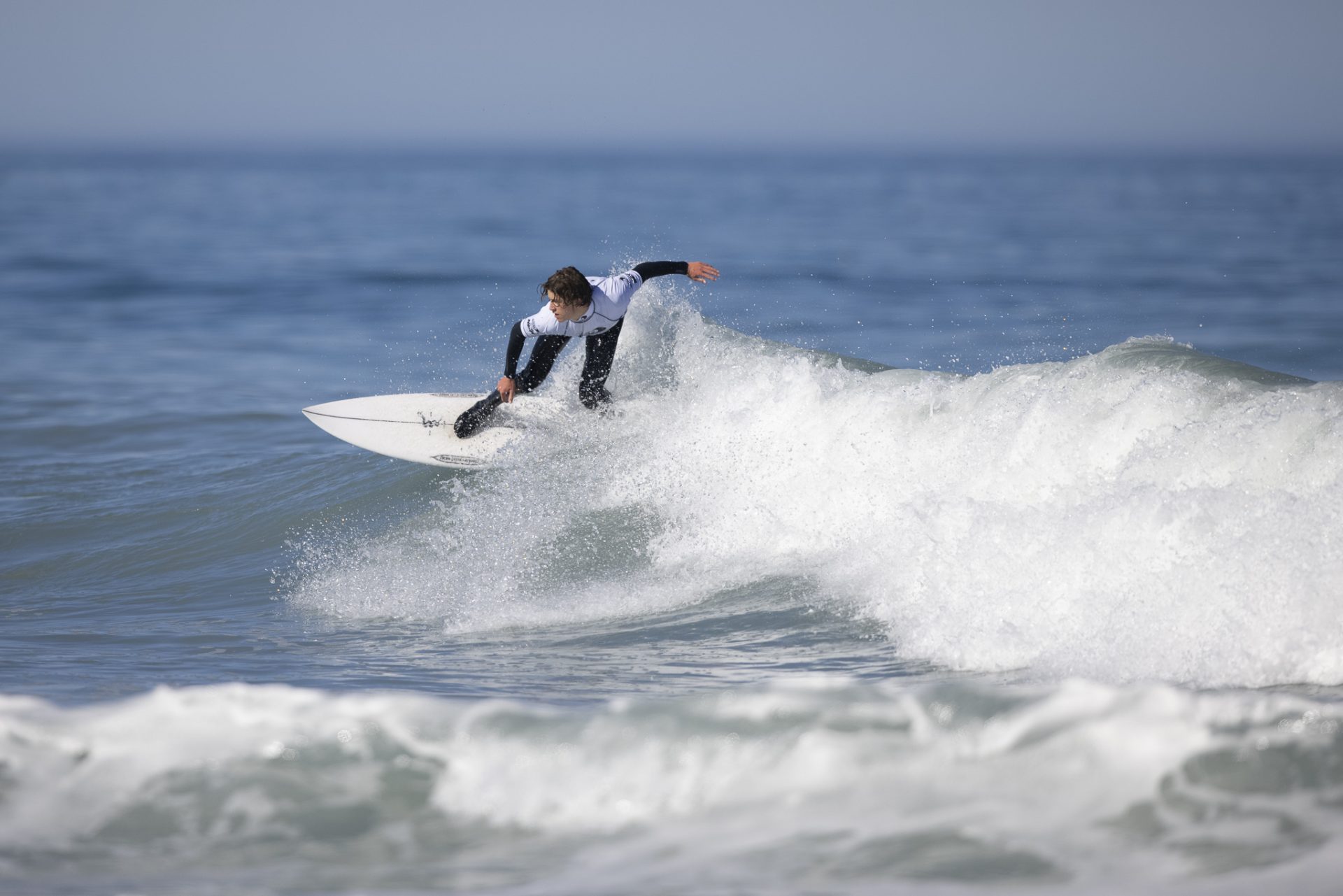 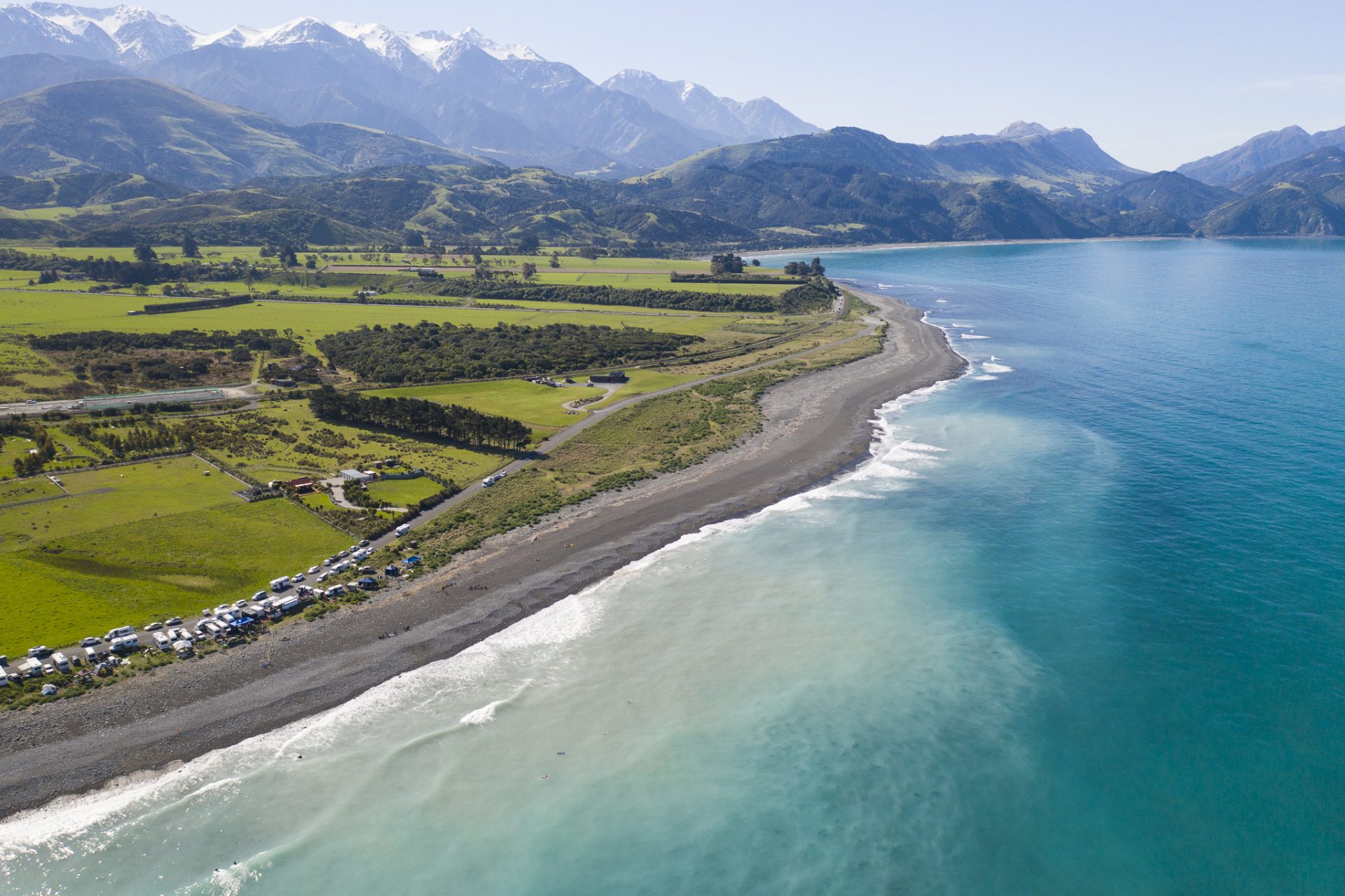 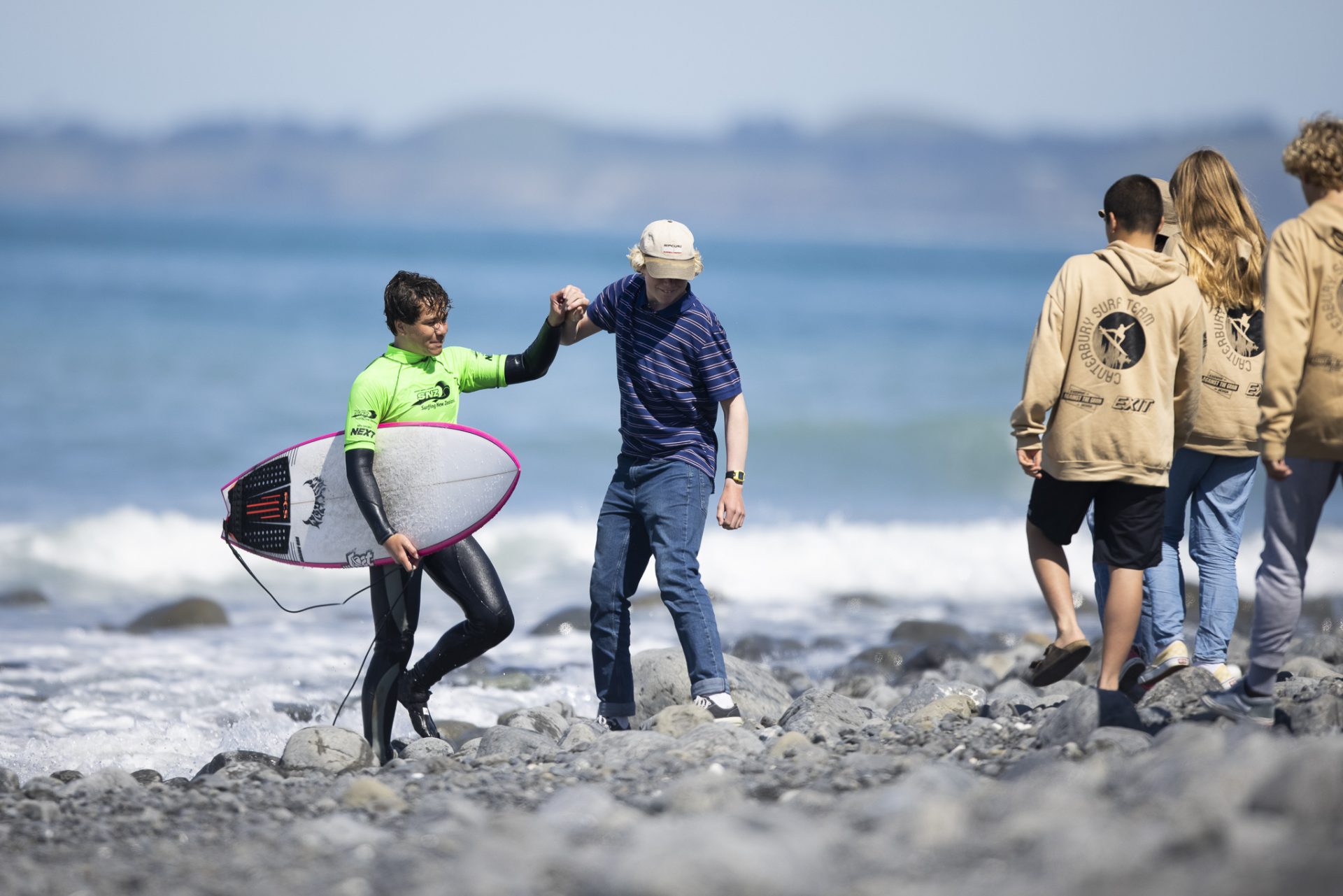 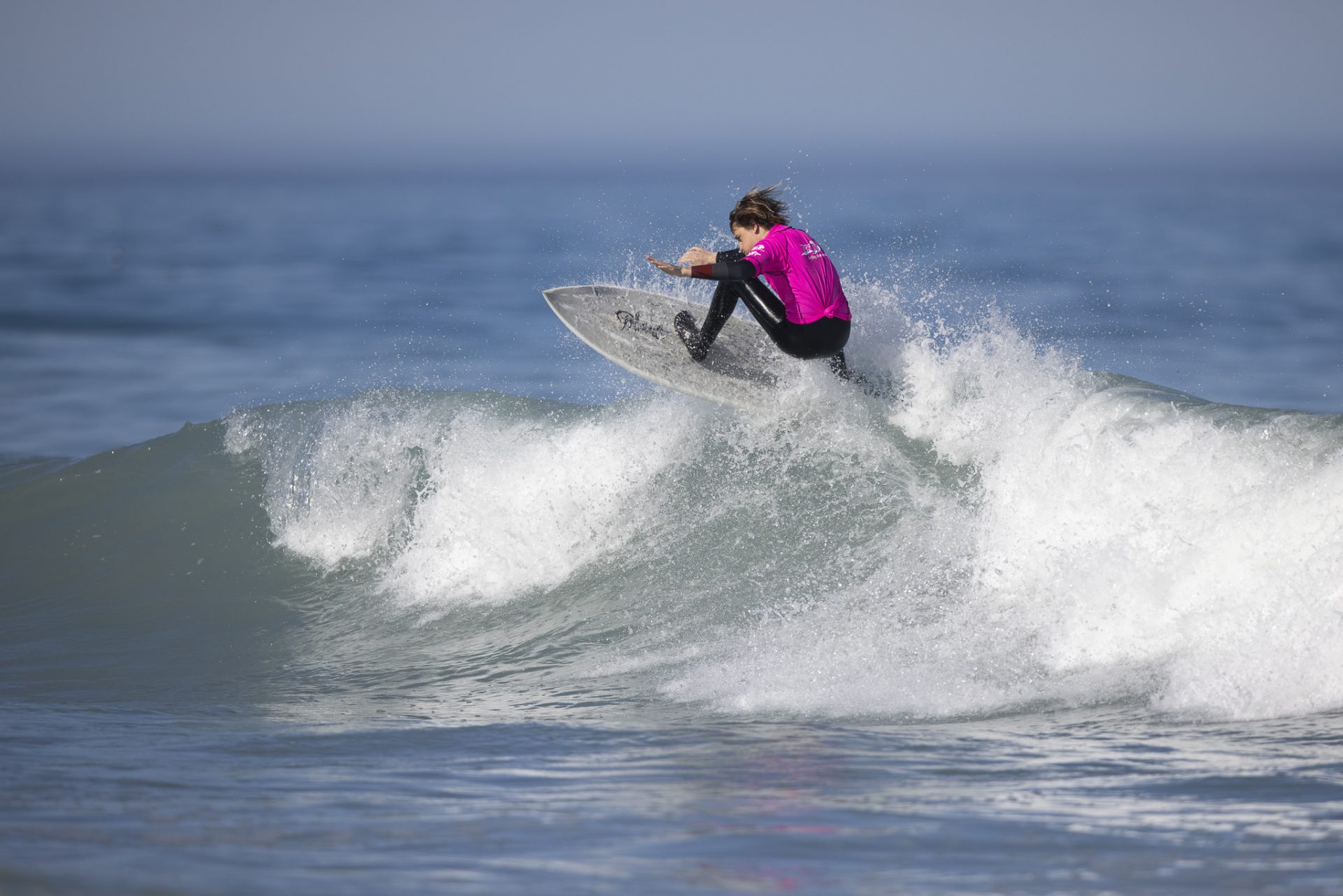 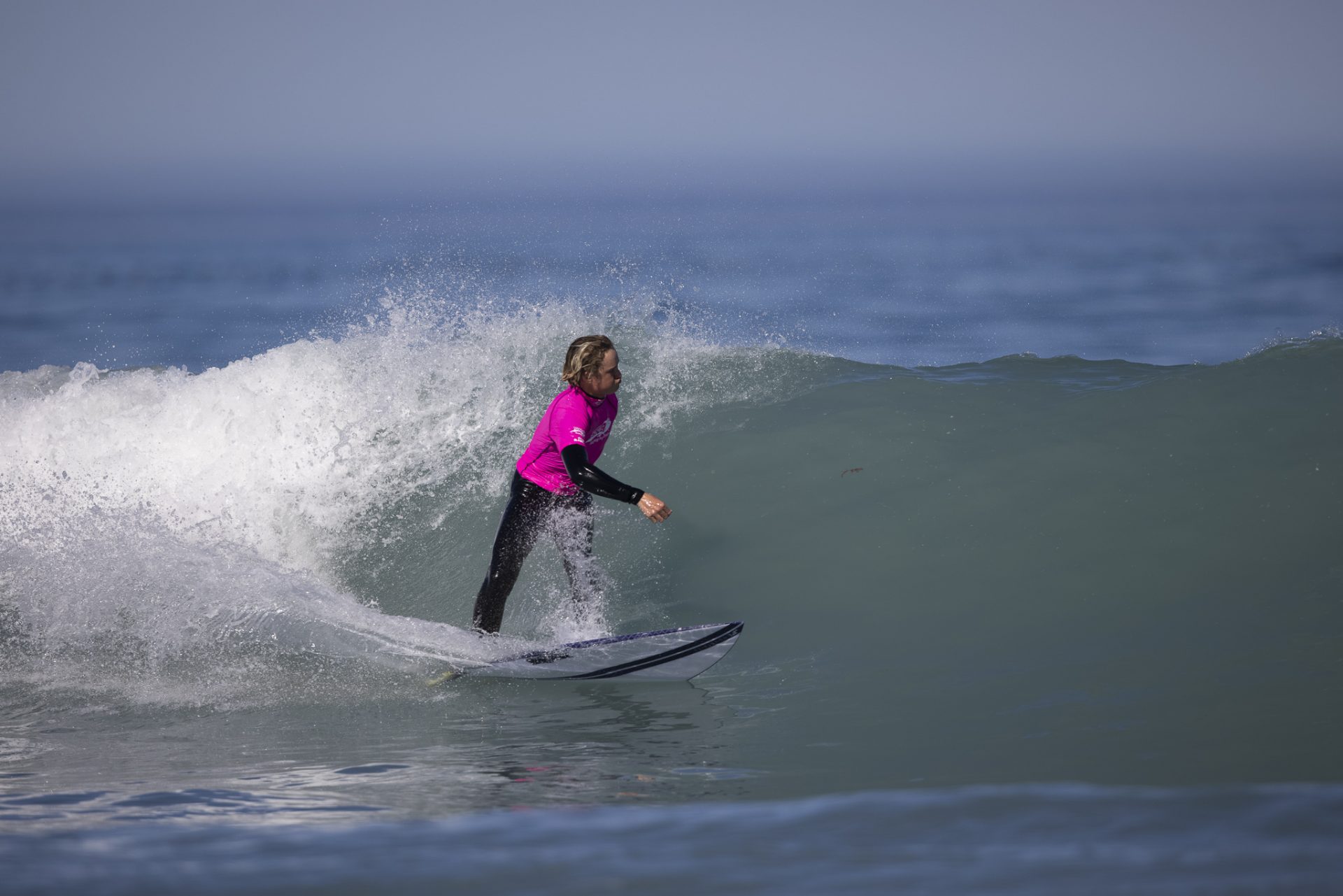 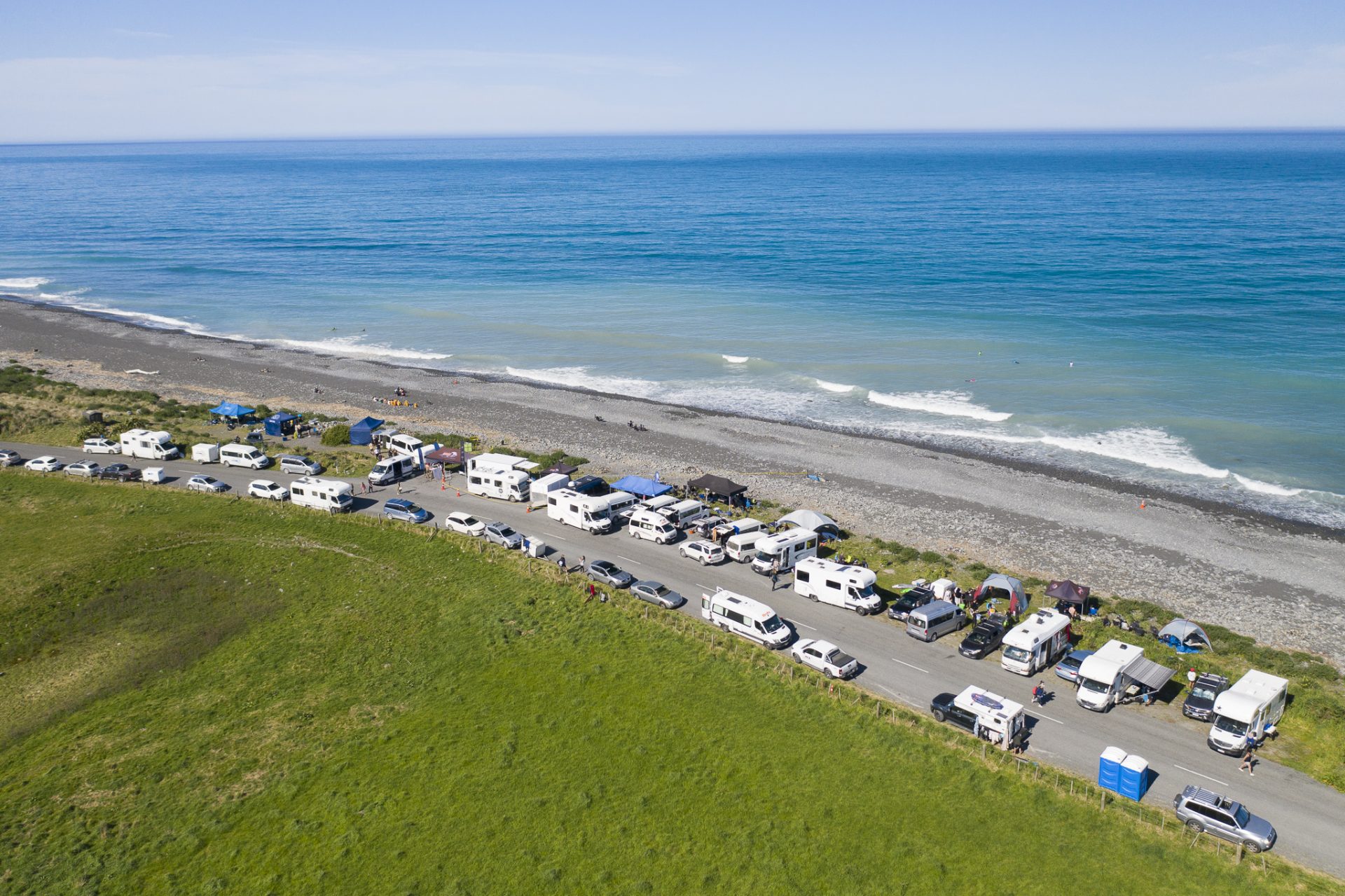 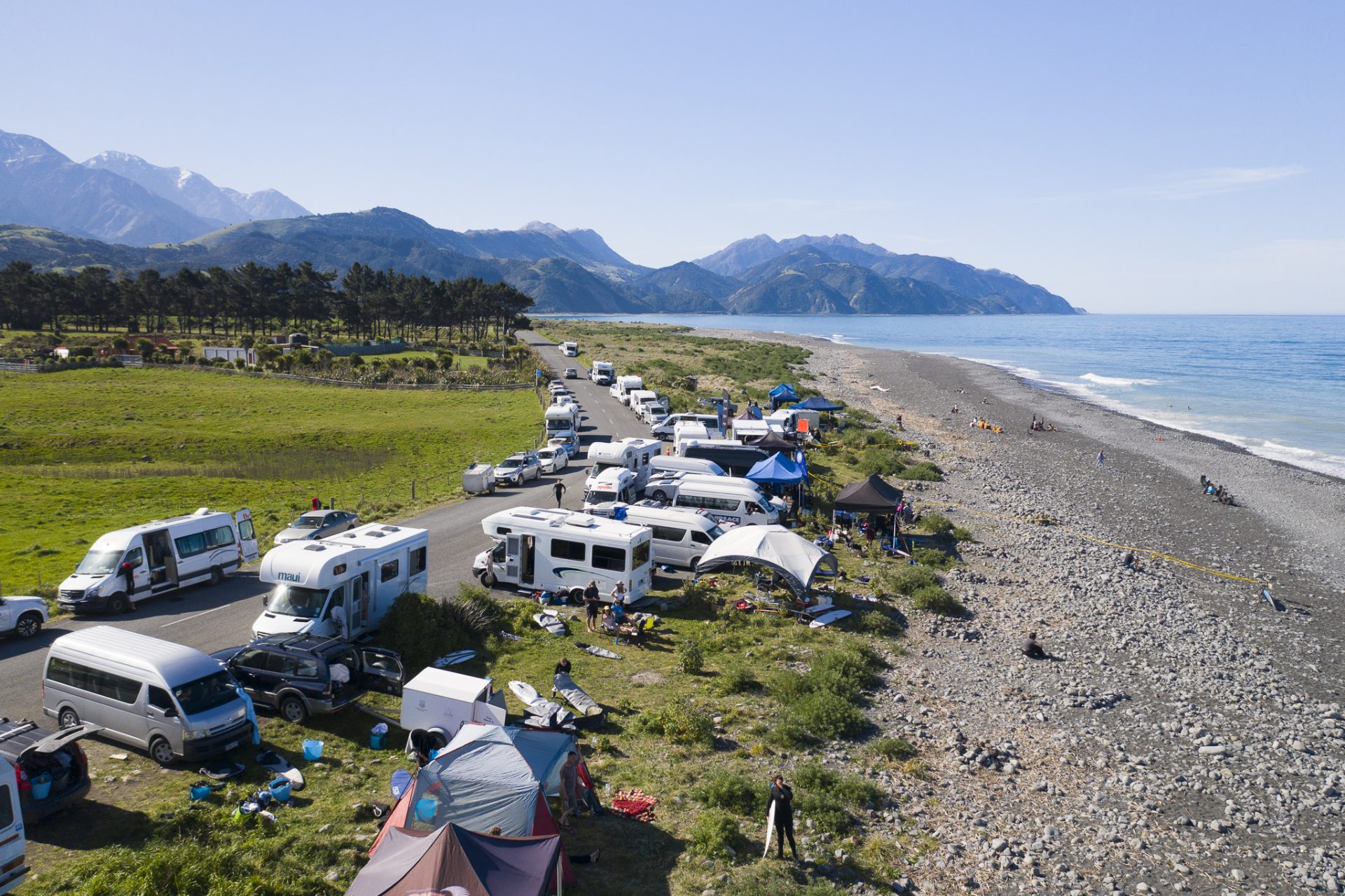 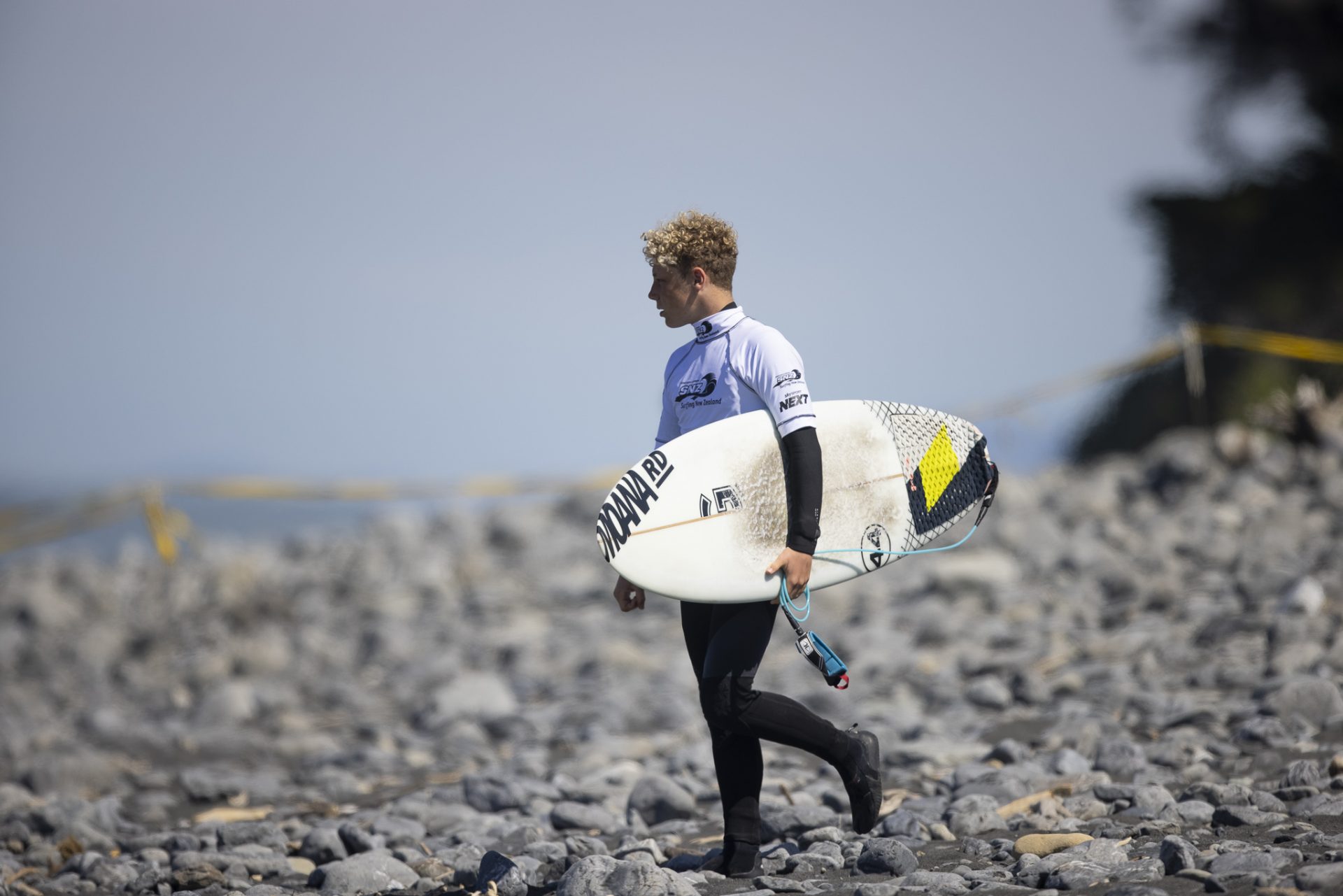 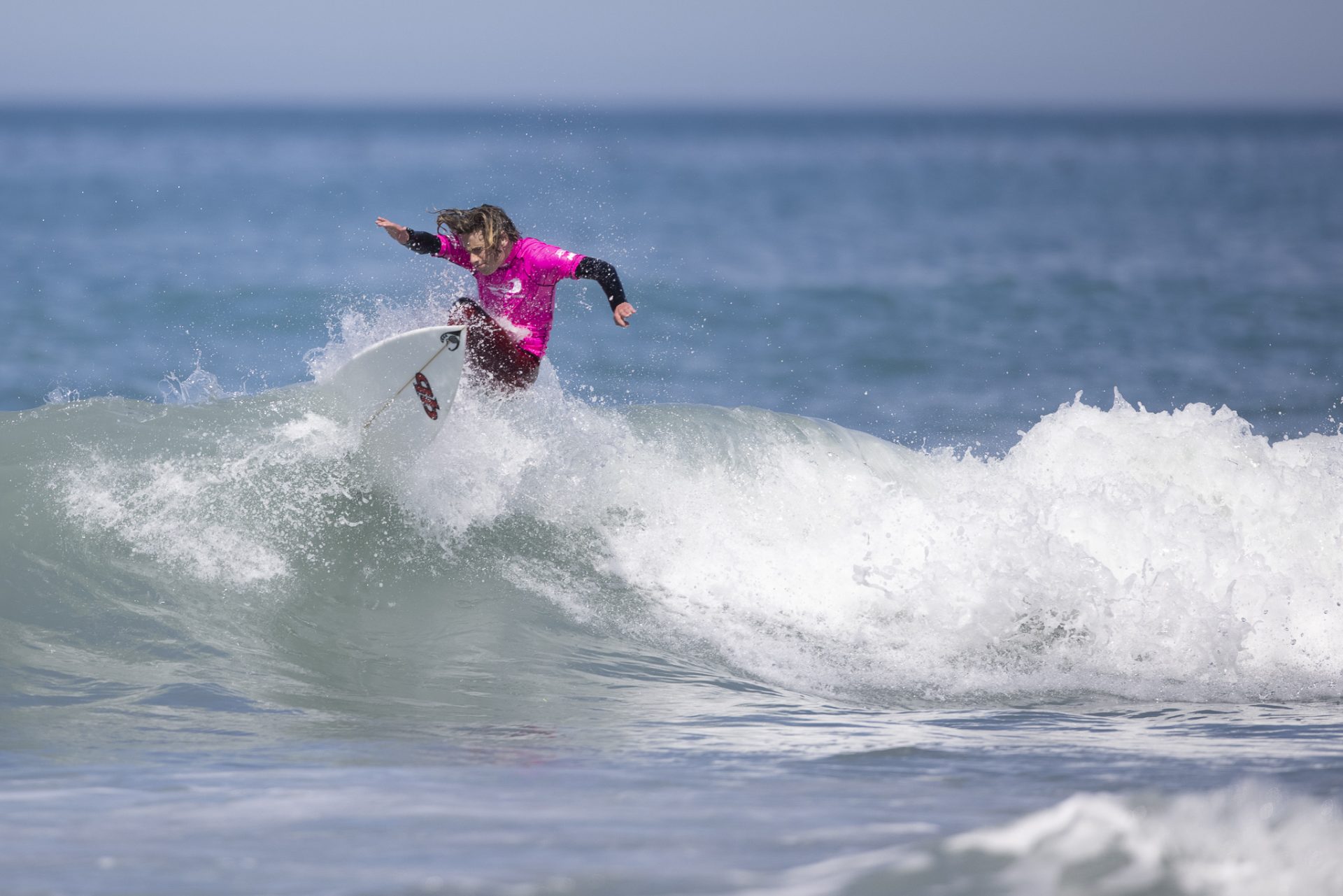 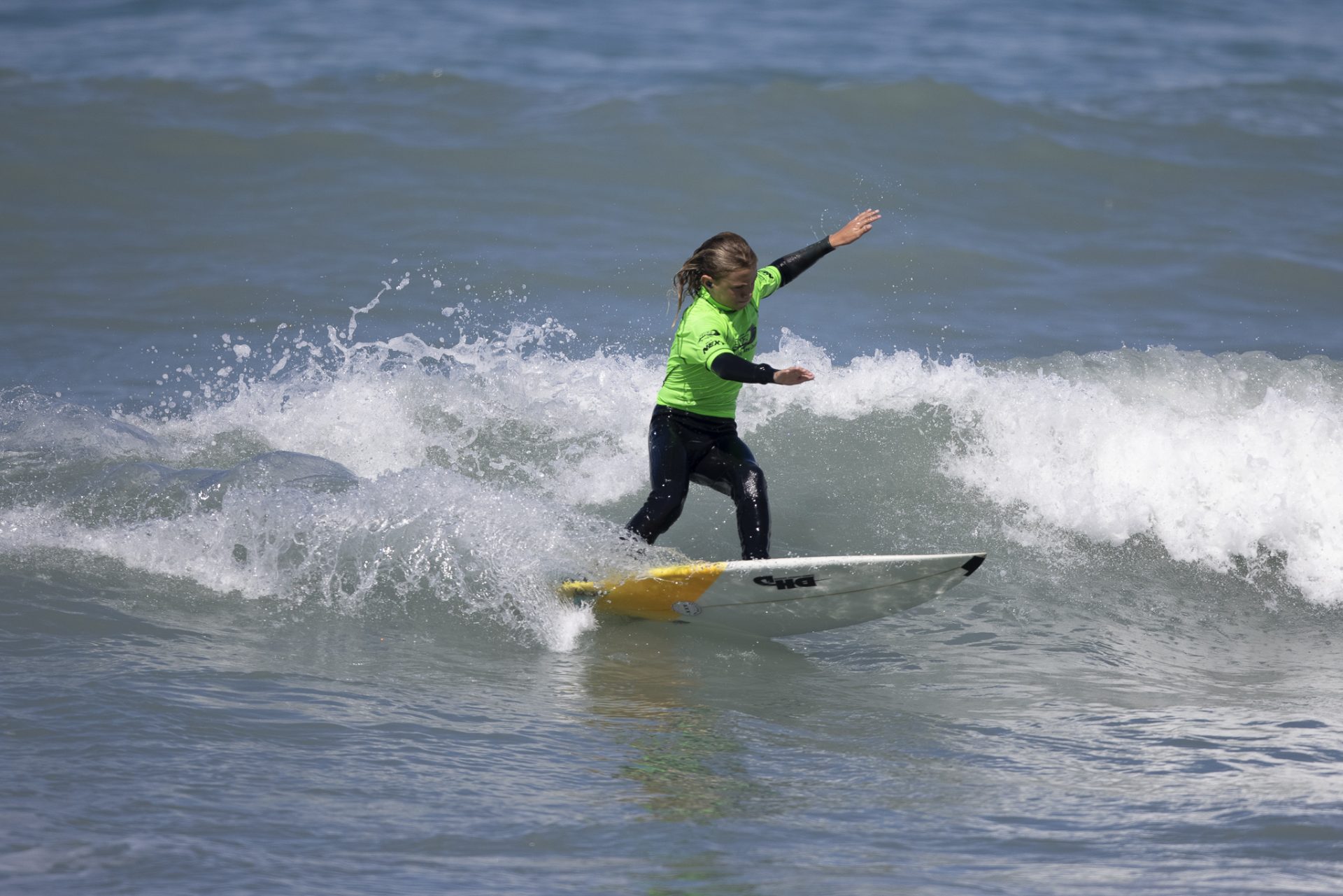 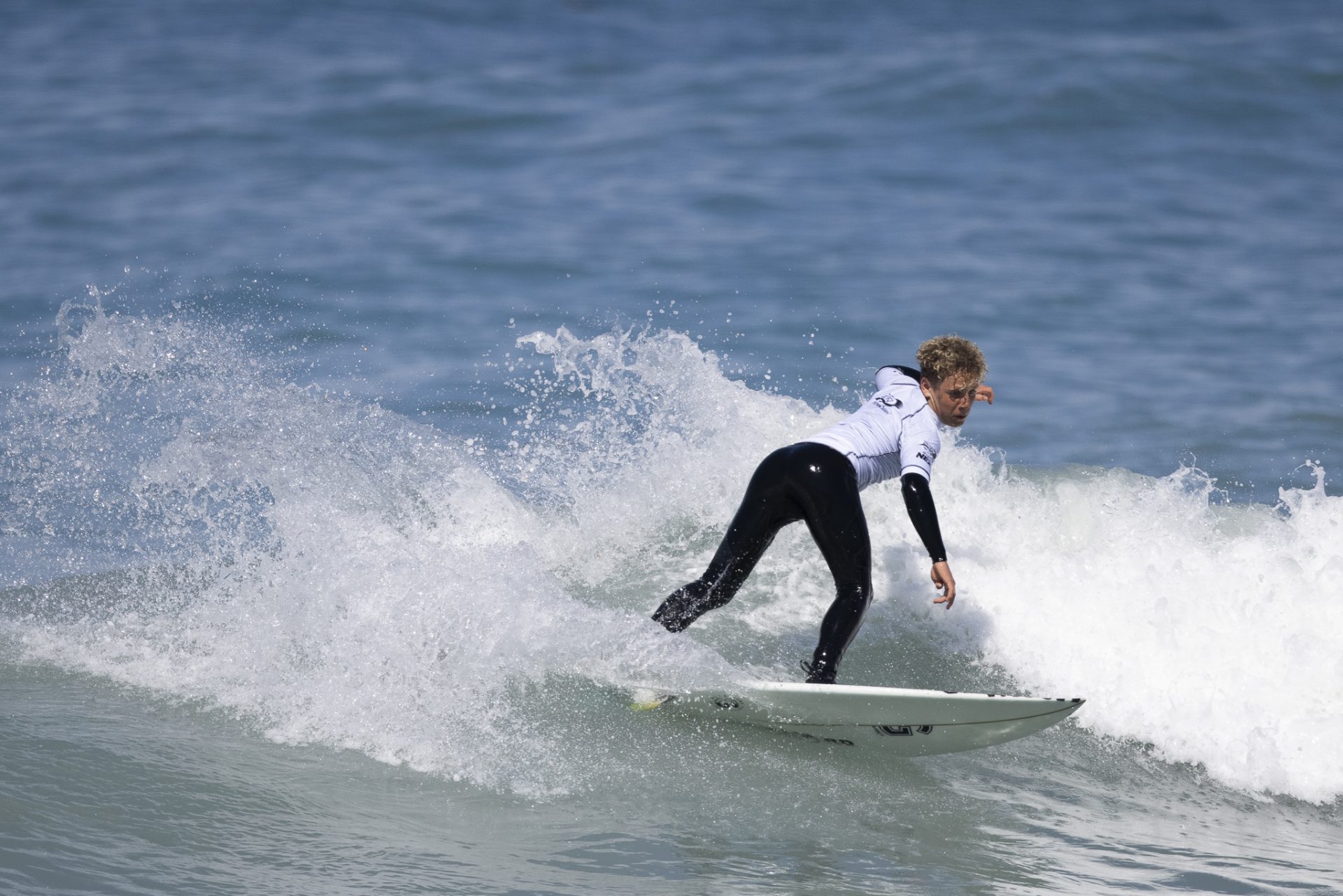 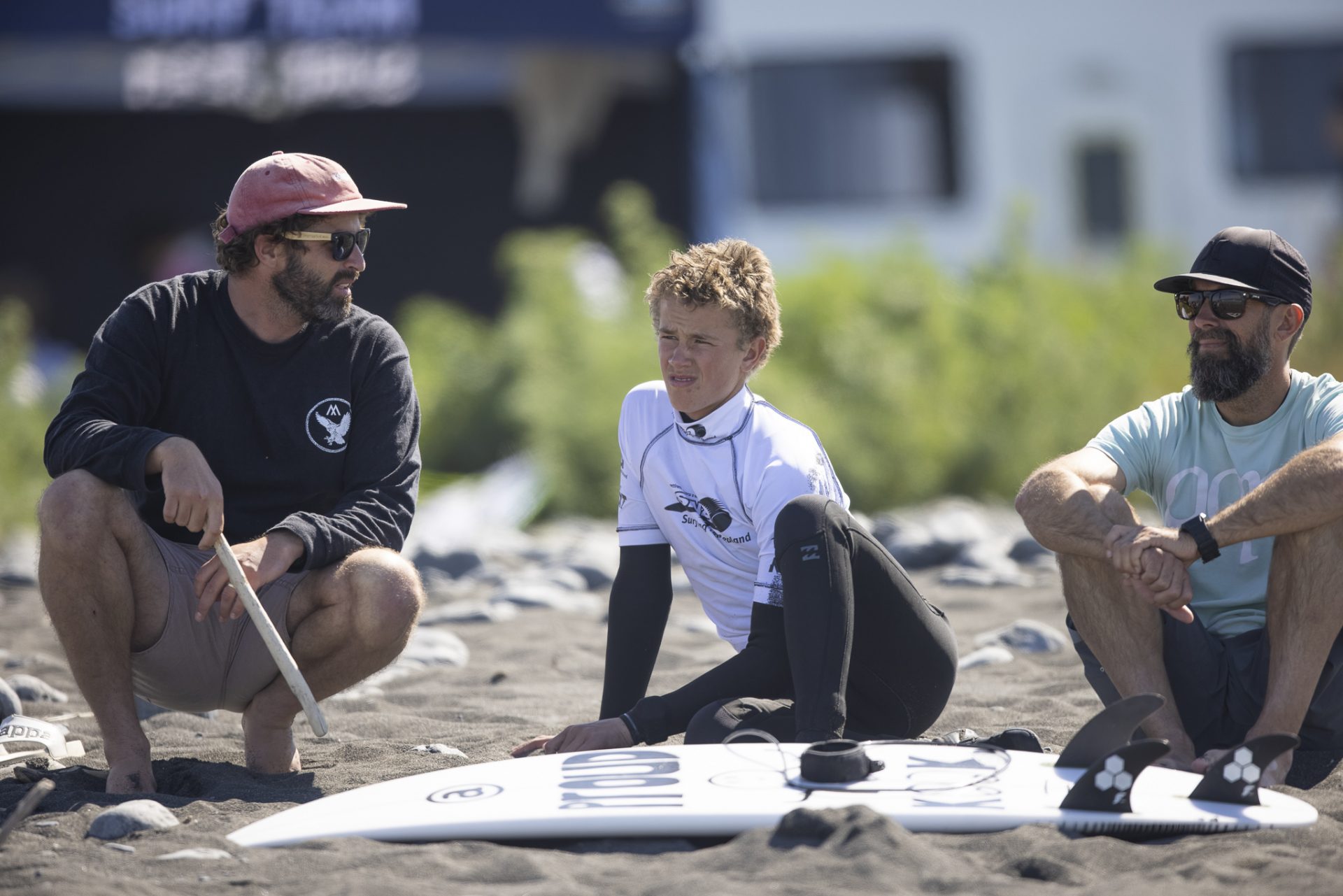 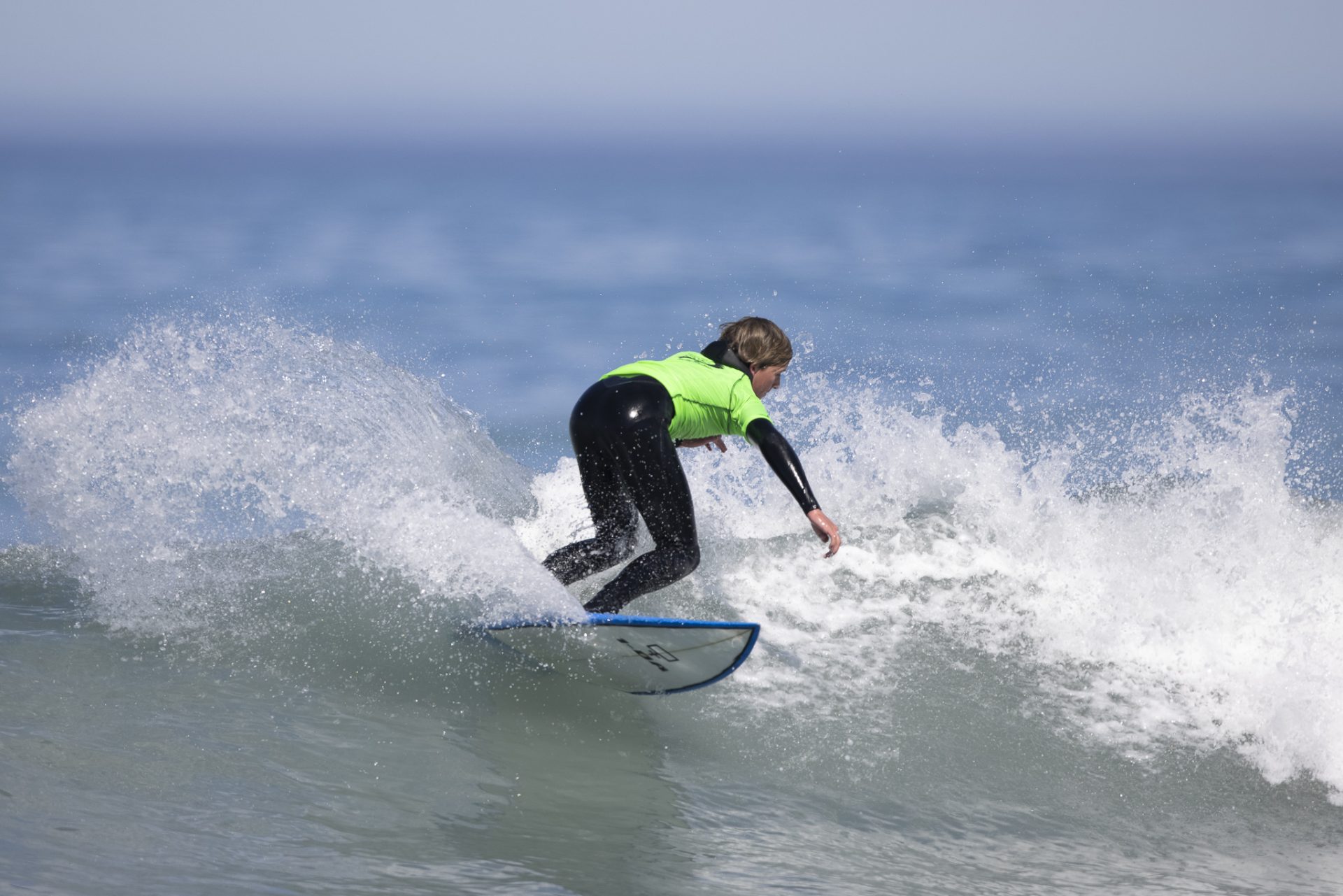 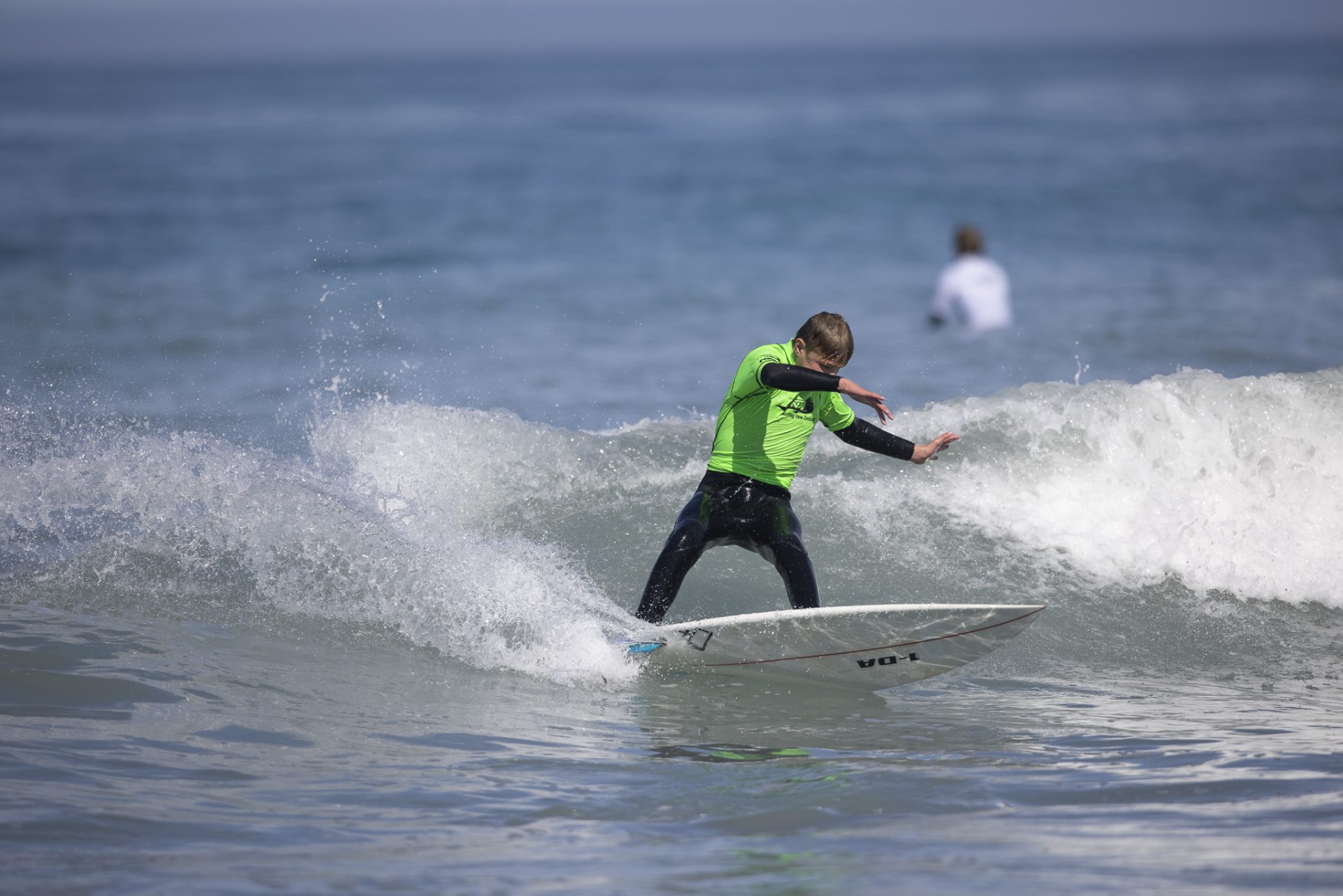 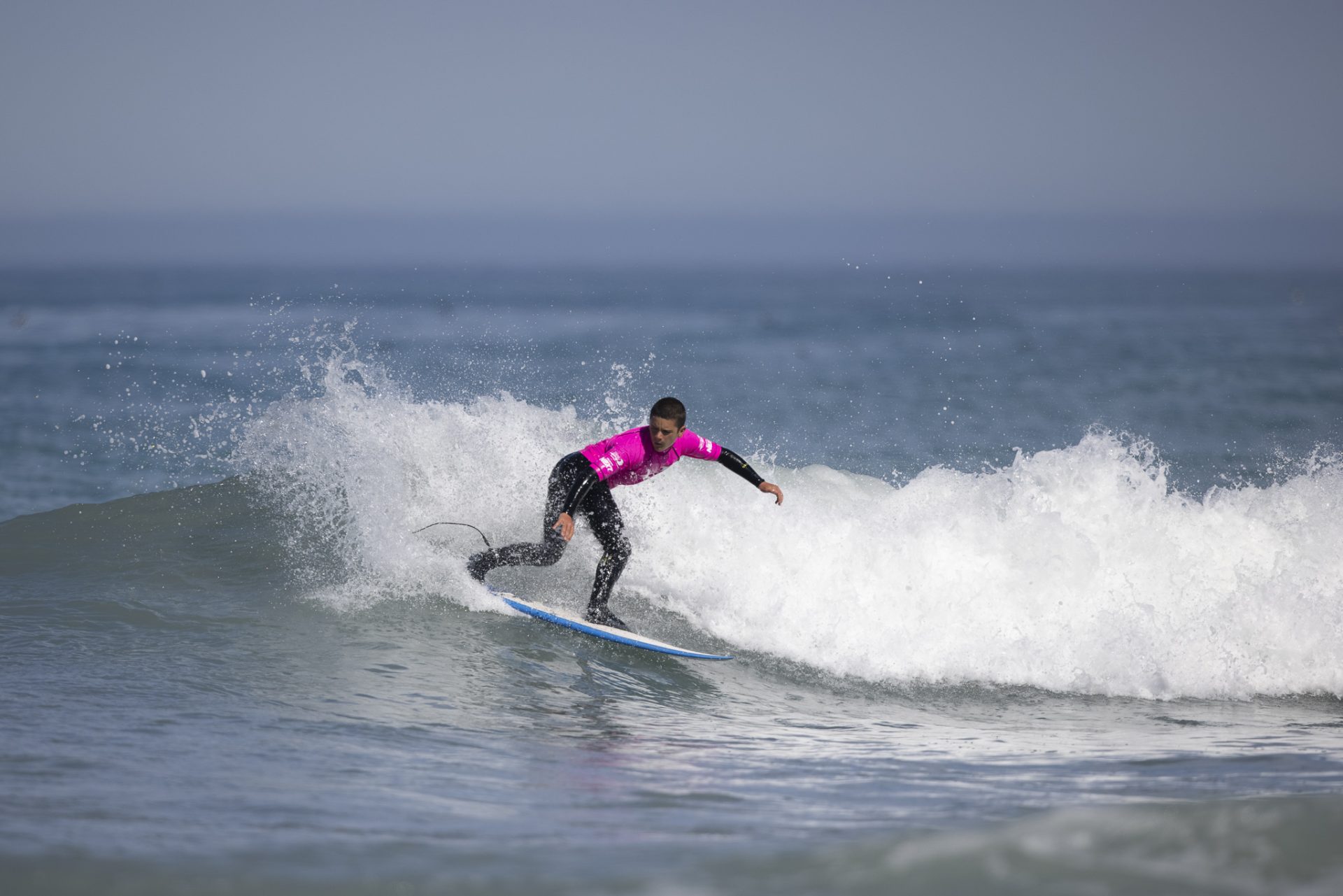 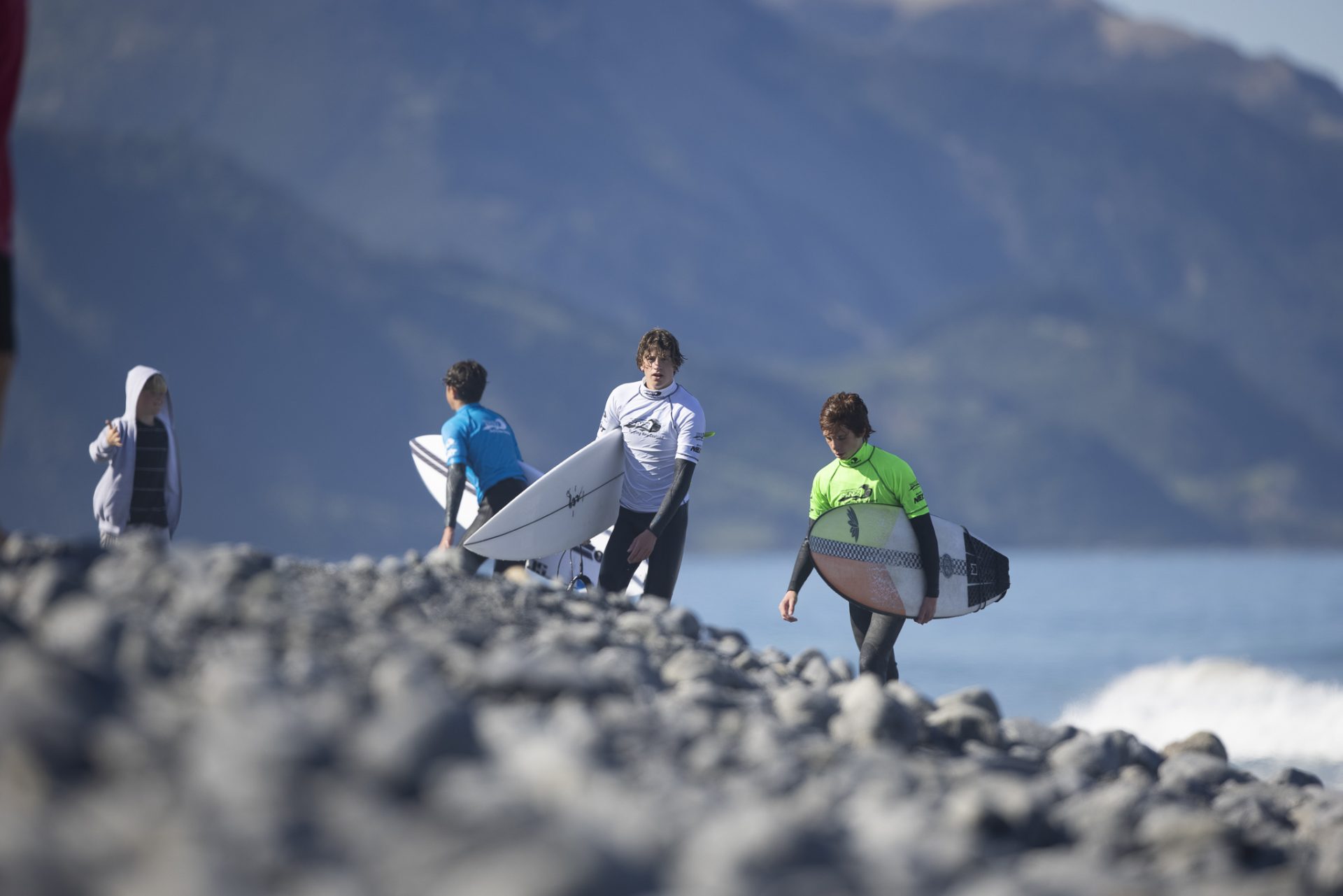 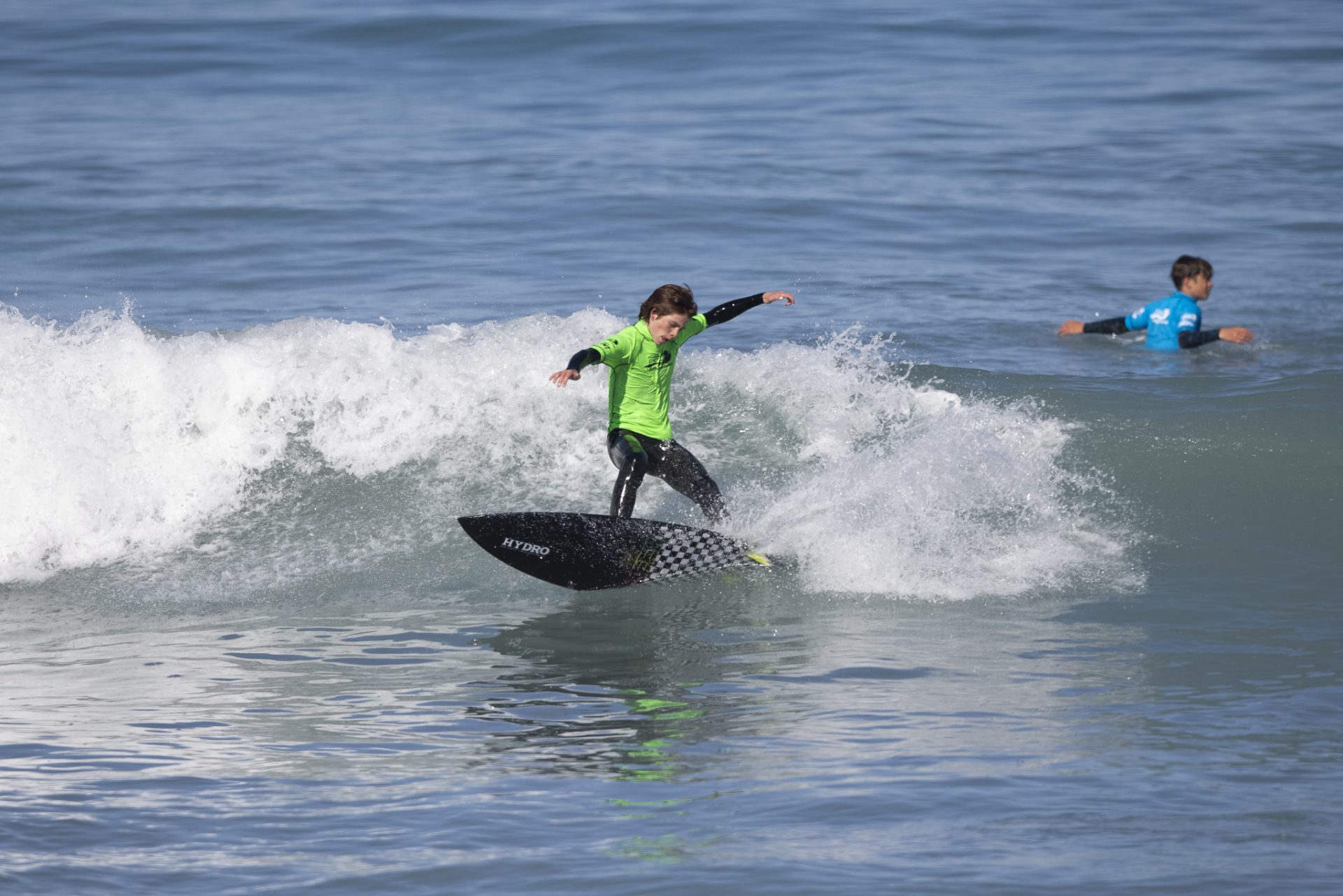 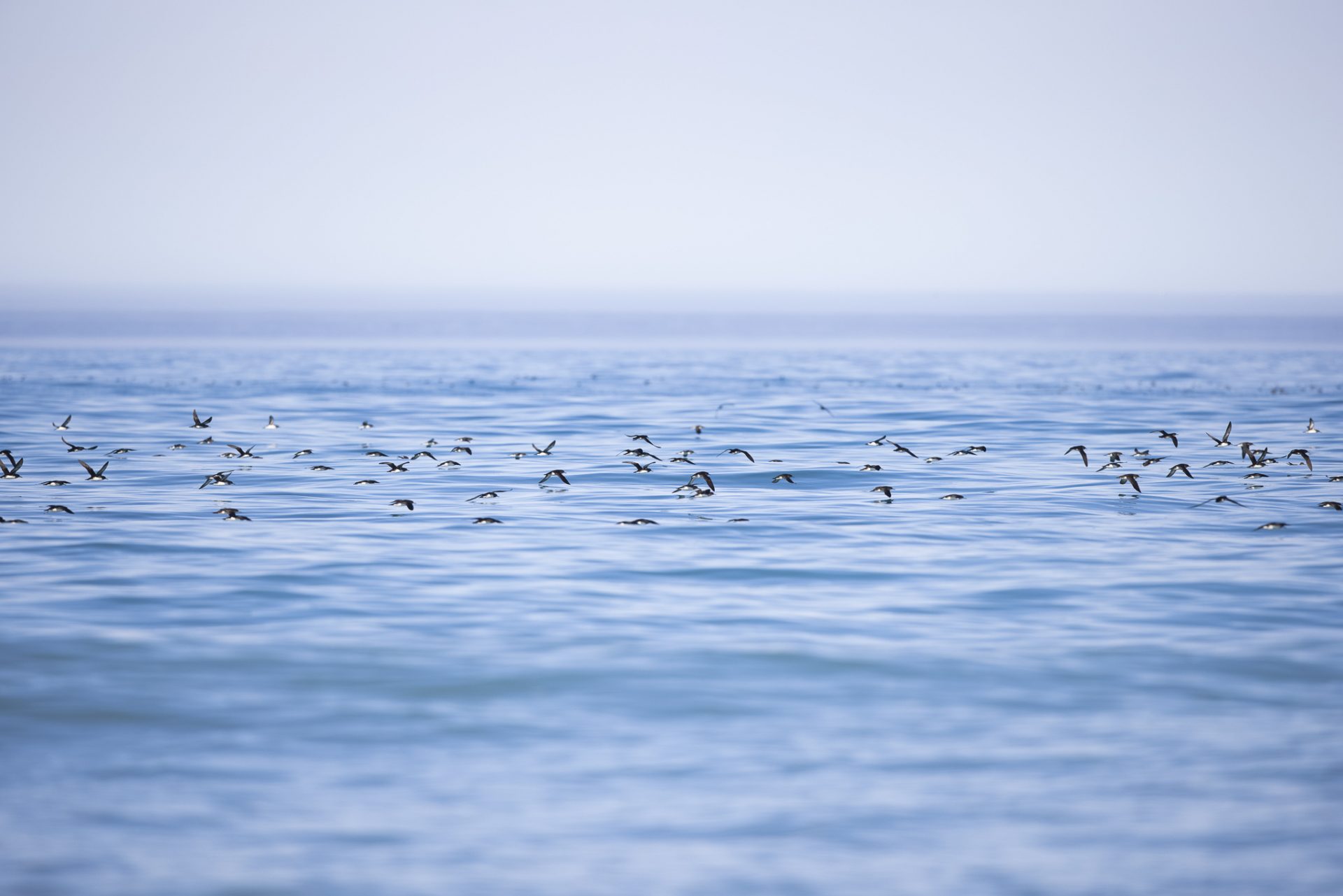 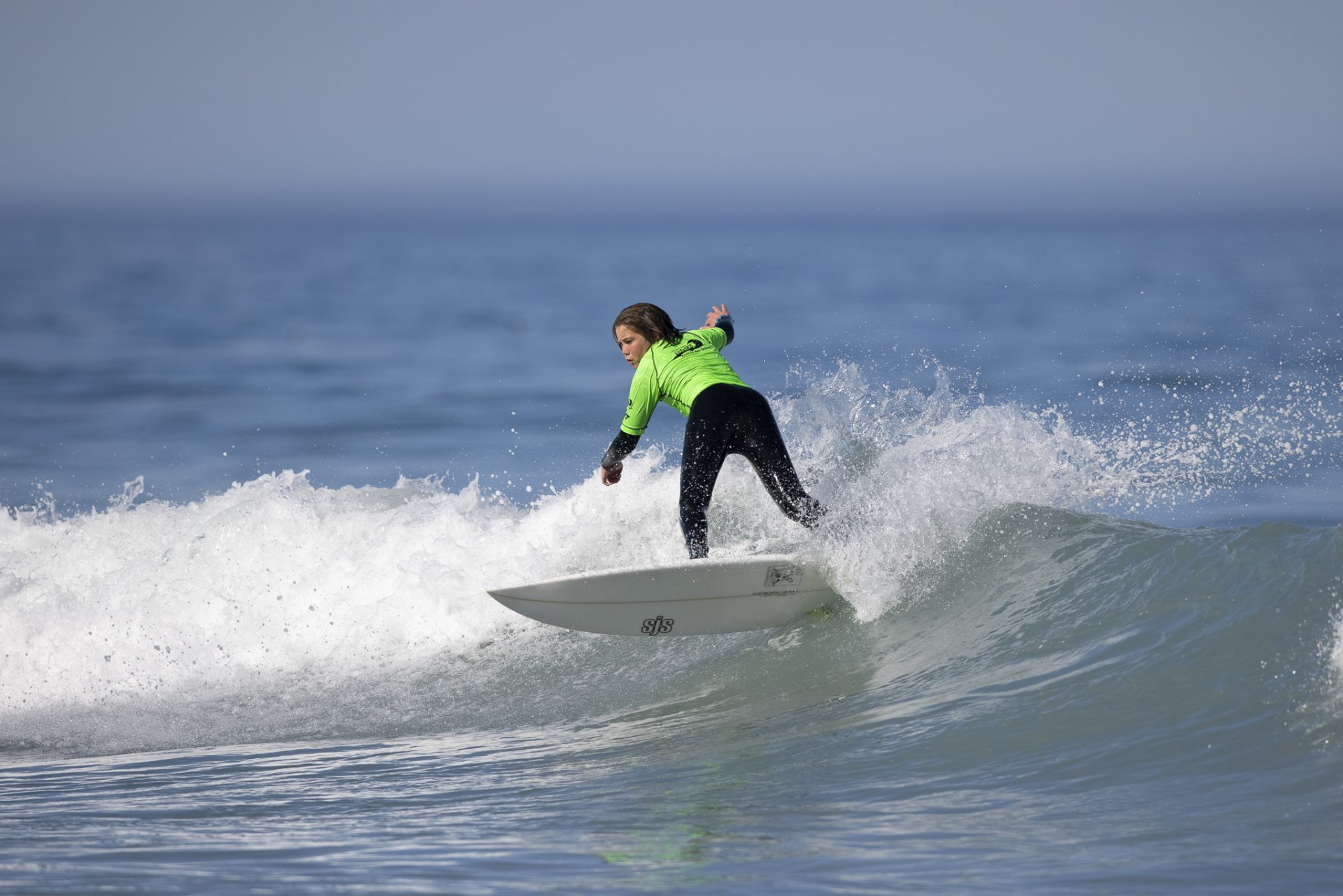 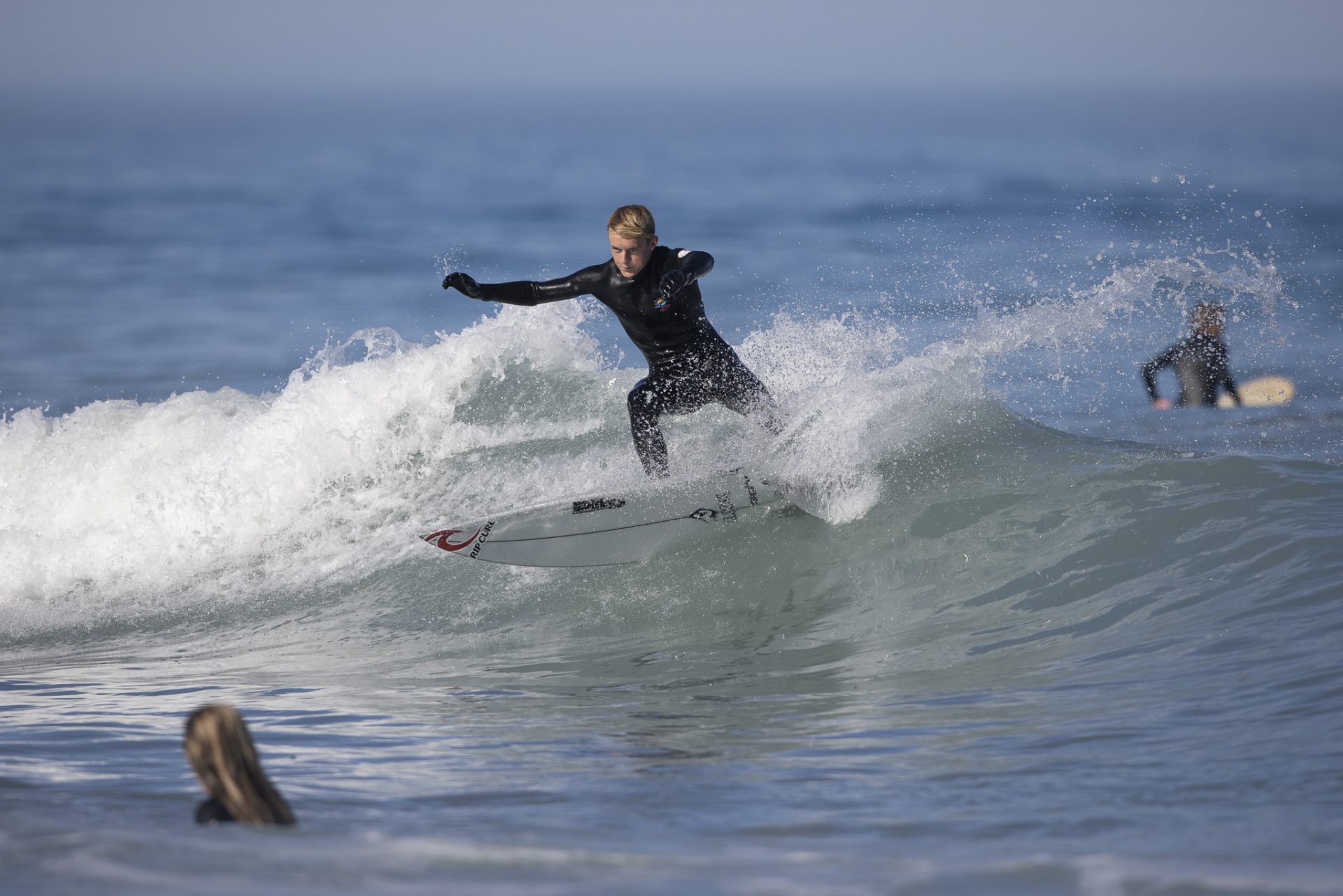 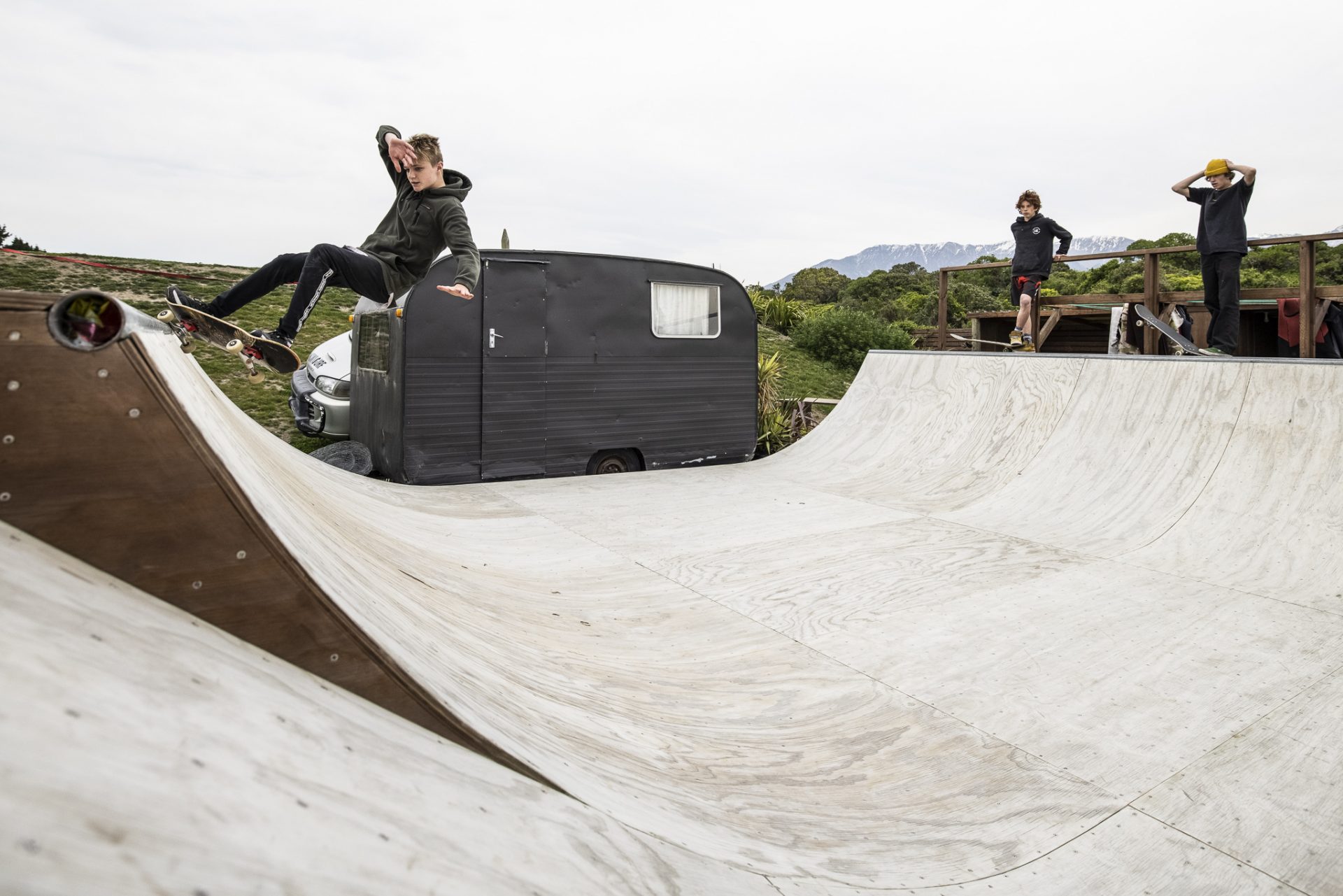 Kaikoura turns it on for Day 1 of the National Scholastic Surfing Championships. The 110 competitors were greeted by a small wind swell which was complemented by warm temperatures and light winds.

Regional teams from the length of the country posted up on the rocks at Meatworks, Kaikoura. With morning high tides delaying a start to proceedings, the boys in the Under 14 and 16 Divisions got underway early in the afternoon.

The 0.5m waves were just enough for participants to put their mark on the event. One surfer that did just that was Taranaki’s Kalani Louis who posted the day’s high score of 14.0 points out of a possible 20.

The solid goofy footer looked energetic in the small waves to advance to the second round where, no doubt, he will be hoping to capitalise on the new swell filling in on Wednesday where he will face off against team mate Izaak Hayes and an inform Dunedin surfer Jake Owen.

Louis was joined by Northland team members Tai Erceg-Gray and Ari D’Anvers along with Jai Oakley (Chch) as impressive surfers in the early rounds of the Under 16 Boys Division.

Early in the day the Under 14 Boys Division kicked off the day. South Island’s top grom Jack Tyro (Chch) lived up to expectations making easy work of his first heat. Piha’s Will Hardie (Piha) followed suit in the following heat at his first Scholastic Championships with an 11.4 point heat total for the win.

The Scholastic Championships has a re-qualifying round so that all surfers get at least two heats at the event. Participants attempt to avoid the re-qualifying rounds where possible and there were a number of surfers in the regions that did just that.

Hawke’s Bay enjoyed success through the Gregory brothers Kobey and Braydon as well as Luca Rendle. Mali Millen (Tai) advanced for the Coromandel Team and Otago had success through several surfers including Luke Rogers, Nixon Reardon and Karne Gabbott.

Day 2 of the event was called as a layday after waiting for wave conditions to improve on the lower tide. A southerly squall ripped through the contest arena damaging the Northland team’s tent in the process and sending boards flying. The organisers made the difficult call to postpone to Wednesday. Further round one heats will be contested from Wednesday when the swell is expected to increase significantly. Dual arenas may need to be used to get through the 96 heats of the event.

The National Scholastic Surfing Championships are scheduled to run from Monday to Friday (October 5-9) with the finals being streamed live on Sky Sport Next on the final day.

The National Scholastic Championships comprises seven age group divisions for males and females across both shortboard and longboard disciplines.

110 surfers are participating in the event after having qualified to represent their twelve-person teams via a series of regional events held over winter.

The 2020 National Scholastic Surfing Championships is sanctioned by Surfing New Zealand, the Secondary School Sport NZ and supported by the New Zealand Sports Collective, Sky Sport Next and Pub Charity.

Results from Day 1 of the 2020 National Scholastic Surfing Championships

Born in the Waikato, Derek has worked as a photographer since 1994. During that time he has surfed and photographed extensively throughout New Zealand the Pacific, South Africa and Australia. Derek founded New Zealand Surf Journal in 2018 to "raise the tide for all boats" by shining a light on the New Zealand surf industry. He lives in Dunedin with his wife, Rachael and three children, Taya, Rewa and Keo. Derek was recently named New Zealand Geographic Photographer of the Year for 2018.