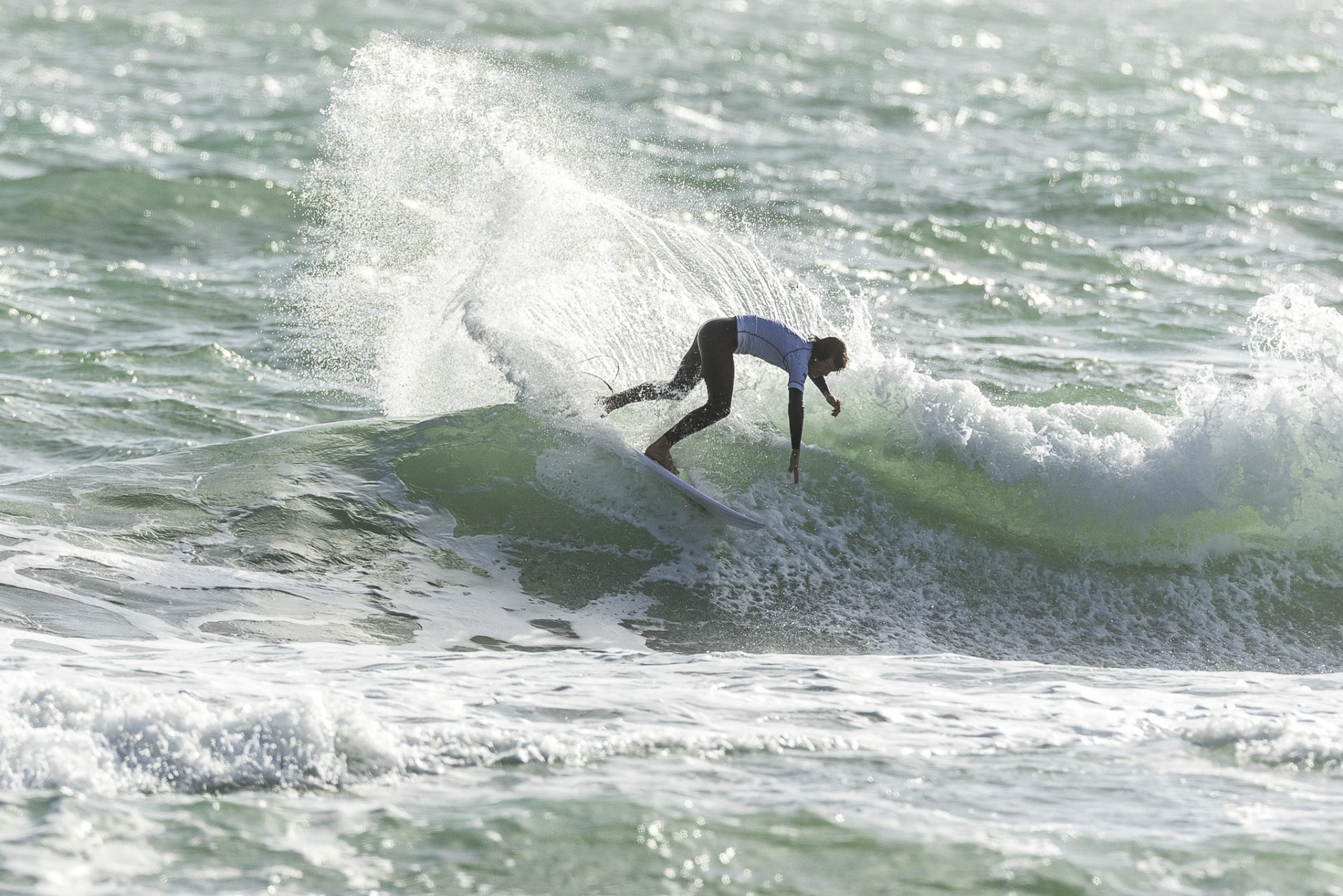 It took eleven events to separate the top junior surfers in New Zealand with the final New Zealand Super 16, presented by Skinnies and Volkswagen, determining the overall winners of the NZ Grom Series held at Piha over the weekend.

Gisborne’s Finn Vette was locked in a season-long battle with Mount Maunganui’s Jack Hinton. Vette finally got the nod winning a high-scoring Under 18 Boys Division final after Hinton exited the event in the semifinals.

Vette joined Christchurch surfer Ava Henderson who won the NZ Super 16 event as well as the Under 18 Girls Division of the NZ Grom Series for 2021.

Vette and Henderson were joined by Mount Maunganui surfers Tao Mouldey and Anna Brock who won the Under 16 Divisions today. Mouldey had already clinched the overall series prior to the final event while Brock shortened an unassailable lead held by Ava Henderson in the Under 16s.

While the Under 14 Divisions were not contested at the final event of the season, Tao Mouldey and Maya Mateja reigned supreme over summer, Mouldey winning the six events he contested and Mateja winning four of the five events she contested.

The day started out with strong westerlies, which never subsided as forecast leaving a messy 1.0m wind swell to challenge the skills of New Zealand’s top young surfers.

In the final of the Under 18 Boys Division, Finn Vette surfed to an impressive 14.67 point heat total. He had a slow start before back-to-back good waves that pushed him out into the lead, his last netting him a 7.67 point ride.

“It was pretty fun but the waves were difficult all day,” commented Vette. “We managed to get a couple in the final for some good scores, the Rags boys were ripping and so was Ari, but yeah, all round it was a good day for me.”

Vette, who had not given the rankings implications much thought prior to the event, was wanting to go into the day with no expectations and to simply try and enjoy himself.

It was Josef Jungwirth (Rag) that finished runner-up securing second in a tight battle over Ari D’Anvers (Whngarei) in third and Kora Cooper (Rag) in fourth, the three surfers separated by less than 0.60 points.

In the Under 18 Girls Division, Ava Henderson (Chch) stormed to yet another win for the season posting a 13.8 point heat total with her usual mix of flare and power in the tough conditions. Similar to the Under 18 Boys Division, less than one point separated second from fourth with Natasha Gouldsbury (Tara) finishing runner-up, local Piha surfer Liv Haysom finishing third and Ariana Shewry (Tara) finishing in fourth.

Tao Mouldey continued his stellar run of form in the Under 16 Boys Division with his seventh win of the season in the division. A 15.5 point heat total this time around separated him from his opponents with Dunedin’s Jake Owen finishing in second place ahead of Kalani Louis (Tara) in third and Beau Woods (Mnt) in fourth.

Anna Brock (Mnt) claimed the Under 16 Girls Division with a challenging final that saw the lead change several times before the Mount Maunganui surfer clinched the win with a 5.73 point ride for an 11.3 point heat total. Asia Braithwaite (Gis) held the early lead in the final after opening up with a 5.0 point ride, but was pushed back to third at the hands of Brock and local surfer Leia Millar who scored a 4.33 point ride on her last wave to finish second overall. The youngest of the Brock sisters, Sophia finished the final in fourth overall.

The Volkswagen x Skinnies Wave of the Day went to Tao Mouldey (Mnt) in the final of the Under 16 Boys Division with the 14-year-old smashing a big opening turn linking the wave through to the inside with a spicy finish that even he felt worthy of a claim, the wave coming in at 9.0 points, the highest single wave score of the day.

Final results from the NZ Super 16 presented by Skinnies and Volkswagen
Piha Beach, Auckland
Saturday May 15