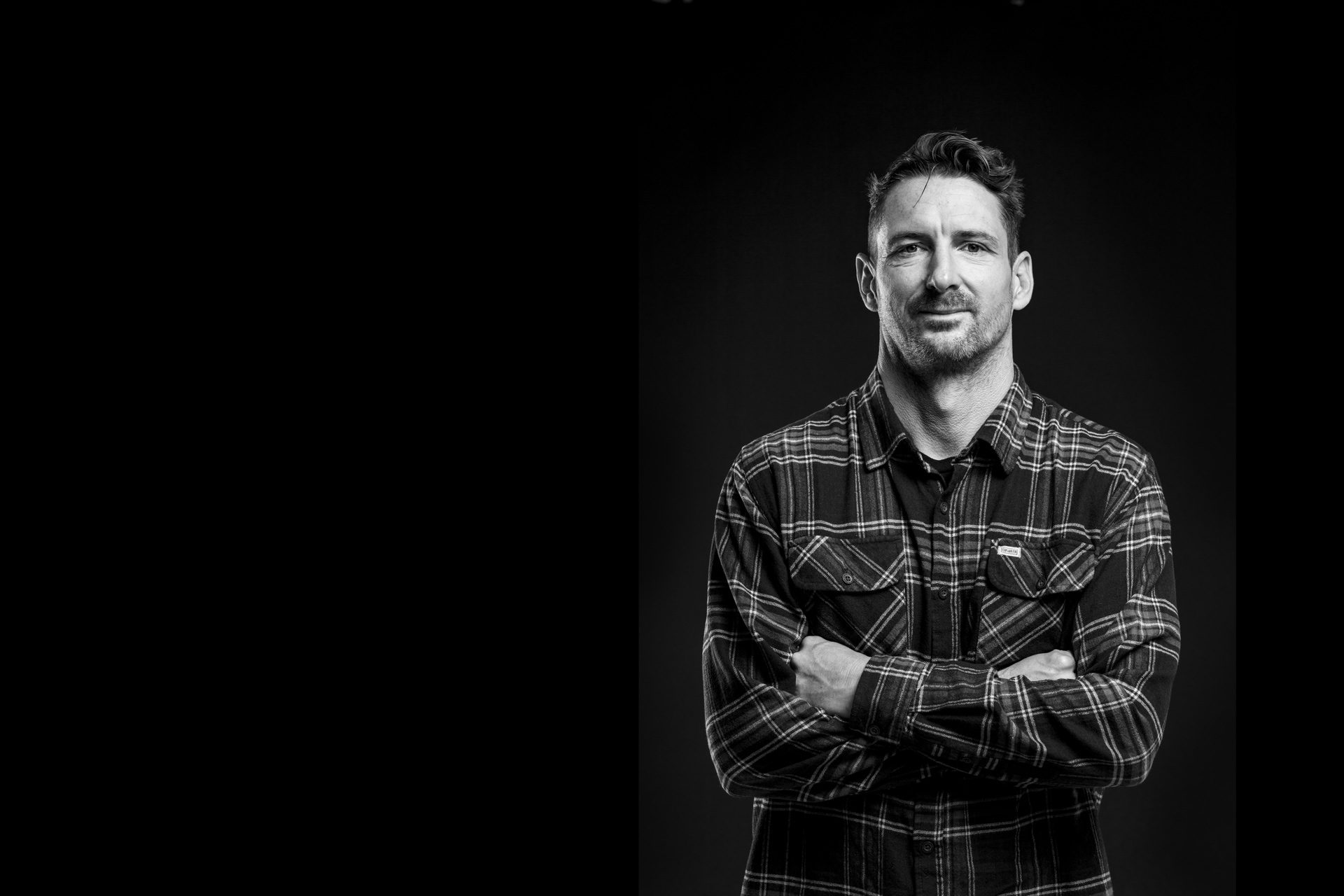 It’s one of those swells. Every ten minutes a pulse that gets you excited, but in between a calm pool of blue with the occasional rideable ripple. It’s been like this all week with the same crew hunting the sets on the favourable tide led by Josh Thickpenny and Luke Murphy. They’re joined this week by Maz Quinn. He’s surfing royalty in New Zealand. One of our best ever and even at 42 he surfs with an intensity befitting a Championship Tour heat at playful Teahupoo.

Maz has just returned from a stint in Indo where he works as a surf guide for Wavepark Mentawai.

“For the past three years I’ve been working as a surf guide – it’s a nice getaway for a couple of months in the middle for winter,” he smiles. “Wavepark Mentawai is an amazing resort so it’s pretty easy – I doesn’t even feel like work really. Just look after some guests and take them surfing to the best waves we can find. It’s a great escape.”

The land-based resort is small – catering for up to 12 guests at a time at its idyllic location in the island chain.

“It’s near the Playground area so straight out the front is a wave called Hideaways, which is a really good left, really hollow at low tide and really fun at high tide,” Maz explains. “The resort is very central to a lot of breaks with Rifles and Kandui about 15 minutes away and Bank Vaults another 15 minutes away and lots of other good waves in the area.”

The resort has two boats – one boat will find more playful waves and the other boat will take the surfers who want to charge in bigger waves.

“That seems to work best and means we don’t have people rock up and sit in the boat for the whole session if it’s too much for them. We try to help everyone to find the waves they want to surf.”

Each trip is 10 days and so the guides get 24 hours on changeover days to surf by themselves. Maz said he definitely got his fair share of waves, but the recent late-July ‘Mega Swell’ didn’t really pan out for them.

“The first day was pretty raw – it got pretty big, but not as big as we were thinking it would,” he recalls. “We didn’t get to surf much of that swell actually – it was 8-10 foot and some of the guests didn’t want any part of that, which was fair enough. It was quite gnarly. We surfed a few breaks that I hadn’t surfed before – a few nooks and crannies and we got some really nice barrels during that swell. Christie, the owner, knew a few sheltered spots that were still 4-6 foot which was pretty good. It was a lot of fun with a bit of discovery element to it.”

I ask Maz about comments from outgoing Surfing NZ CEO Greg Townsend about New Zealand’s chances of another surfer making it on the World Tour to join Paige Hareb. Townsend said it would have to be “an athlete with deep pockets”. Maz laughs and nods in agreeance.

I talk with my friends overseas and it’s the same, budgets are slashed again and again. It’s hard to figure out why because surfing has never been so popular.

“Unfortunately, that’s almost where we are at,” he admits with a shake of his head. “When I was competing there was a lot of money – the budgets were quite large and it seemed like the heyday of surfing was the ’90s and early 2000s. That has all changed now. It’s way harder to get a decent salary out of companies – it’s not just here – that’s the way the whole world has gone. I talk with my friends overseas and it’s the same, budgets are slashed again and again. It’s hard to figure out why because surfing has never been so popular. Unless you can get an airline sponsor or something like that, then it’s a tough battle. I think that’s pretty sad this day and age. I guess once you get there then a lot of companies would turn up, but getting the sponsorship to get to the events and compete is the biggest thing right now.”

“The surf industry in New Zealand is run by Australia with most of the companies, so getting support is like getting blood out of a stone most of the time. I can’t see what the future holds there, but I think the only avenue for now is for our athletes to get support from the government, high performance sport and sporting agencies. But to do that we’re going to have to place or get into the Olympics and that road to the Olympics is looking very difficult.”

The surf industry in New Zealand is run by Australia with most of the companies, so getting support is like getting blood out of a stone most of the time.

“Obviously Paige (Hareb) is going to be there, but also Ric (Christie) is doing very well this year and hopefully will get there with a few more results,” he offers. “Behind them we have Billy (Stairmand) and Kehu Butler who are both in the running. Kehu has a good approach competing through Australia – like I did from 18-20 and he’s just won the Australasian Junior Series, which I actually won back then also. He’s progressing really well and hopefully he can keep that momentum up. He seems to have good backing and a really nice supportive family, which really helps.”

Like most people in the industry there are some glaring cracks that Maz sees.

“It’s hard for surf companies to sell fashion now,” he offers. “I’m not sure what went wrong there or how they are going to climb out of it. But there are more people surfing than ever and they all need surf hardware: boards, wetsuits, legropes, fins, wax, so I am sure those companies must be doing alright. The hardware side of surfing might be the answer. That’s a good thing and hopefully all the companies can start doing well again in time.”

In an Olympic cycle surfing’s athletes have a real chance to dazzle the world, but is the wave pool the right canvas?

“For me, yes. I’d love to see it,” declares Maz emphatically. “Every wave is the same and it’s not based on the luck of the ocean, but purely who is the best surfer on the day. The Olympic side of things makes sense – a tennis court is the same, 100m sprint is exactly the same each time, so for surfing to have every wave exactly the same it will be based on performance alone. Sometimes the best surfer doesn’t always win a contest in the ocean – this takes that luck factor out of it and rewards the best performance.”

Every wave is the same and it’s not based on the luck of the ocean, but purely who is the best surfer on the day.

Maz said he hadn’t been in a wave pool, but would jump at the chance.

“I am definitely keen to get in one one day. There are some differences with the buoyancy factor in the freshwater. It seems like everyone is surfing epoxy boards to get more flotation.”

The life of a retired pro surfer seems idyllic. Trading waves with the locals at a becalmed Blackhead throughout his week in Dunedin while visiting his son for his ninth birthday.

“My weeks are pretty quiet to be fair,” he concedes.

“I have a few holiday rentals I look after and then mainly just look for good waves around Gisborne when I am home,” he laughs. “I’m lucky enough to do that. I made a few good investments in my pro surfing days and that’s helped. As I mentioned, I was lucky when I was surfing there was a lot of coin around and I didn’t go out and spend it all at once.”

I ask him if he feels a draw to impart his contest knowledge upon the new generations coming through.

“I probably should give more than I do,” he smiles. “If they come and ask for it then I try to help them. We have a couple of really good groms coming through in Gisborne, which is nice to see, and all my mates my age have kids coming through in that 7-10-year-old bracket. There are a lot of them and the next few years should be interesting. They’re a great group of kids and the boardriders and local comps are very strong. It reminds me of my grom years all over again.”

Maz turned 42 recently, but his surfing is still all about power and exceptional lines. He plans to keep I that way.

“I’m probably not surfing as good as I did in my late 20s and early 30s,” he laughs. “But I feel like I am surfing well and I am keeping fit – that’s the key at our age – keeping fit and getting in the water as much as possible and hopefully that downward spiral will be a little slower than a slippery slope.”

Towards the end of another session we’re joined by local shaper Graham Carse, 66 and local teacher Graham Dickie, 65. They’re trading waves off the peak like a couple of teenagers barely aware it’s the middle of winter. Maz watches them stroke into the glassy peaks. I hoot. Maz just smiles a knowing smile.