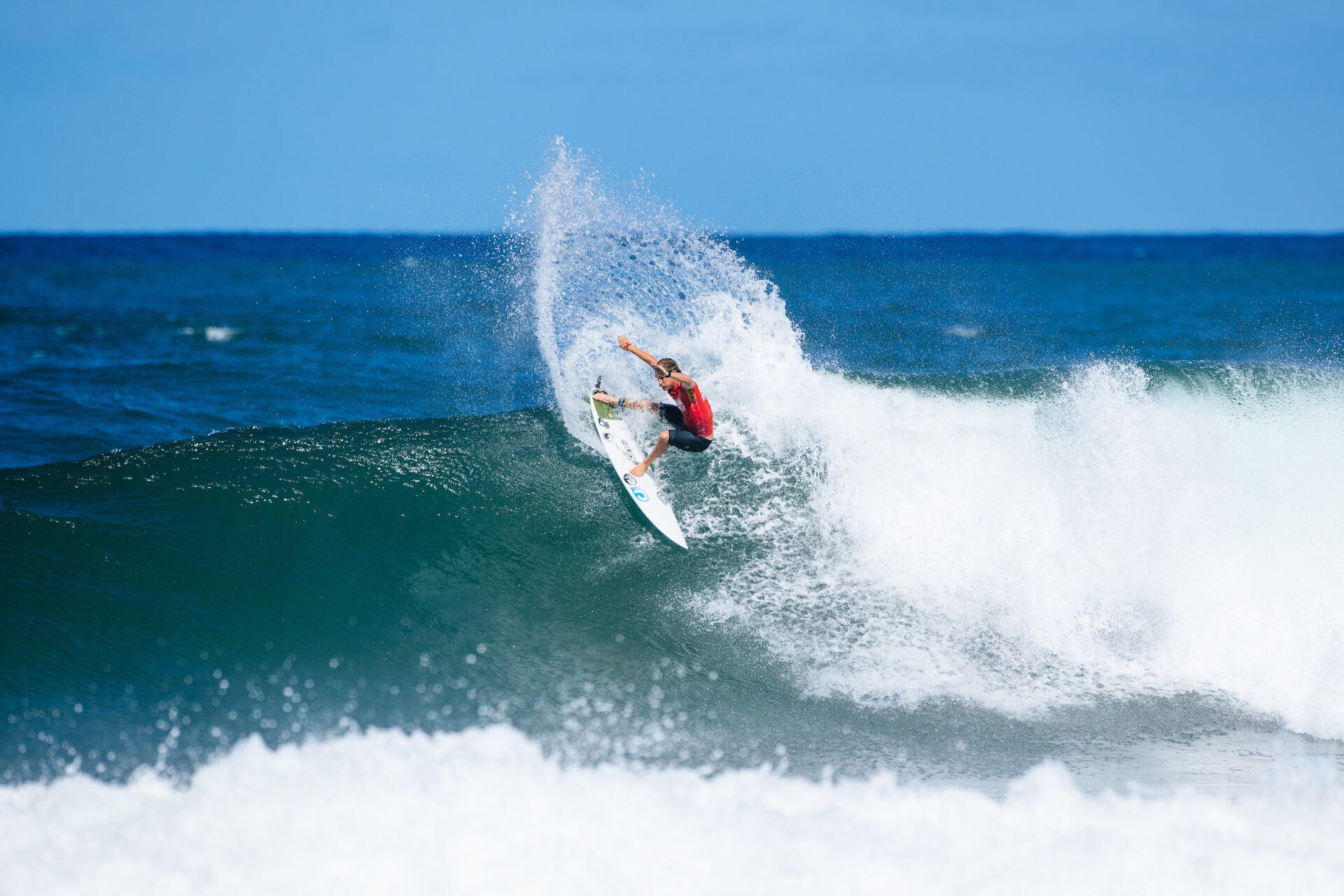 The journey of Billy Stairmand in 2021 is astounding. From fundraising just to get to the Australian qualification series, to the highs and lows of the inaugural surfing event at the Olympics to a frantic run through the Challenger Series – and all while never knowing when, or if, he will be able to return to New Zealand to be with his young family in time for Christmas. His performances under pressure were incredible and speak volumes to the fight inside in him.

NZSJ caught up with Billy between exercise breaks and meals while he was in Managed Isolation Quarantine (MIQ) in a facility in Rotorua. He was his usual happy self and full of positive energy, looking forward to getting back to Raglan.

His run through the Challenger Series was incredibly frustrating to watch – he’d be looking strong right to the end of a heat only to get pipped in the closing seconds and by the tiniest of margins. He ended up 17th at the US Open in Huntington – defeated by Griffin Colapinto, world number 6. Then came Europe: first round exit at Ericeira, Portugal and the same at Hossegor, France. Each time just missing out by the narrowest of margins in heats that were intense from start to finish. One thing became quite clear: the Challenger Series is nothing like the QS – it’s a clever way for the WSL to make a second series that sits just a smidgen off the WCT pace in terms of performance.

But, Billy who famously took down the then 10-times world champion Kelly Slater in Western Australia in 2011, has a head for staying calm under pressure. His mindset and resilience across the CS proved to be outstanding.

“This Challenger Series has been an amazing one for me,” Billy reflects. “I mean I didn’t get the results I was looking for, but I enjoyed every moment of competition and I learnt way more this year than I have in previous years.”

“My goal coming into these events was to make the World Championship Tour,” he explains. “It was hard to leave my family and New Zealand to travel to these events. There were a lot of unknowns – not knowing if I would be home for Christmas, not knowing when, or if, I could get an MIQ spot. And I did not know if I would have enough funds to do them all. But I have a dream and I’m motivated to fulfill that dream. After a good year I earned my spot through the regional QS events. I was the only Kiwi, so I felt I should do it and keep the ball rolling, as they say. I had a really good mindset and believed I would make the tour. I had a lot of amazing people help me to get to the Challenger Series also and I owed it to them to give it everything.”

I ask him how he deals with getting pipped at the post like he did at the first three CS rounds in Huntington, Ericeira and France?

“It’s tough,” Billy offers. “Losing is always going to be hard – especially when you give it everything, prepare the best you can and have the ability to achieve these results. But for me I don’t look at it as a loss. I look at it as learning. I take my time, think about how my heat went, what I could have changed, what I couldn’t control and learn what I should have done. And then I move on to the next event. Yes, I’m super competitive and always want to win and hate losing, but for me I’m trying to learn. The more I learn the less mistakes I will make and then the more heats I will make. My advice to other young surfers is simple: don’t let a loss bring you down. Let it motivate you to do better next time and work harder.”

With the Challenger Series in its first year and a whole new format to the world title race, it seems WSL is evolving by trial and error. While the world championship crowning may have fallen short being staged outside of Hawaii and in ho-hum waves, the CS has stumbled on an exciting group of surfers. Billy describes it as “amazing”.

“It’s the top 10 surfers from each region around the world with added CT surfers,” he begins. “The level of surfing lifts a lot. The level of competitiveness and maturity is amazing, also. Everyone knows how to rip and surf a good heat and I love this. It makes me want to do better and achieve higher. It’s also epic seeing the support of each surfer and their regions. Take the Aussies – they’re all down the beach supporting each other for each heat. It was really epic to see and is something I want to bring into the WQS events in Australia next year for the next generation of Kiwis chasing the WQS, Challenger Series or World Championship Tour. The Kiwi contingent is coming with some force next year and I’m looking forward to being amongst it.”

Having just unpacked from his 12th season in world surfing, at 32, Billy is a veteran, but unquestionably improving each year – and last year more than ever. The fire that some people had questioned during low points in his career is certainly raging right now.

“I know my surfing has matured,” Billy explains. “My heat strategies and competitiveness have become more refined and my mental strength has improved immensely. I definitely think I am improving every year. Especially after this year doing WQS, into the Tokyo Olympics and then the Challenger Series all in one year. My body and mind are amazing and I am motivated to achieve another goal and my dream of making the World Tour.”

Being away from his family for such a long stint was made worse by not knowing when he would return with the farcical MIQ lottery system.

“That was a frustrating one for me,” he admits. “Especially going into Haleiwa and not having a spot. Every week I would sign into the MIQ lottery and try to get a spot. It was tough not knowing if, or when, I would be able to come home and whether I could afford being away that long. But I was very lucky in getting a spot two days before the Haleiwa contest started, which took a lot of pressure off – that meant I could just solely focus on competing and surfing the best I could.”

After he is released from MIQ Billy has to do a further three days of self isolation, where he says he will “hang out with his animals at home before wifey comes home”.

Just four years ago – around 2017 Billy was potting plants at a Whale Bay nursery to fund his dream, people were questioning his fire and desire. His dream must have seemed a long way away at that stage.

“That was a huge turning point for me,” Billy remembers. “I had a tough couple of years – losing my mother to breast cancer. Then my major sponsor left and my results were just not happening. I got a job with a friend of mine and couldn’t do as many comps as I wanted to for a while. But this turned out to be a good experience – it made me realise how good I had it. It made me realise that I wanted my dream and I was not going to give up that easily. I wanted to prove to myself, my mum, my wife and everyone who had supported me that it was achievable. It made me realise I wanted to be a professional surfer. I set goals, small and big, then worked hard to achieve them. I sacrificed a lot and achieved those goals.”

Now, the first Challenger Series is complete and Billy has a top 40 finish among the very best in the world and clearly showed he has more to give. It’s an incredible story.

“I am very proud of where I have come and I’m happy to be in this place I am today,” Billy smiles. “I surrounded myself with good people – some amazing people gave their time and energy and believed I could achieve these goals. I’m so thankful for all of them. I can feel the New Zealand support when I am competing and I hope I am doing everyone proud.”

Back in New Zealand for the small eight-week off season Billy plans to compete in the Nationals at Westport and any other New Zealand events that pop up.

“I also want to go check out some of the grom comps and see if I can help around those events,” he adds.

Ever the professional, Billy is quick to explain that his success is powered by a cast of many. He’s extremely grateful for all of that.

“I’d like to thank absolutely everyone who has supported my journey in any way they have,” Billy smiles. “From messages, to helping me with funds, to smiles and beyond. Honestly, you all make this worthwhile. Without all of you, I wouldn’t be where I am today. Thanks also to my wife, family and friends for always being there for me, win or lose, and always being proud. I’m also so grateful for all my sponsors for believing in me and the people behind closed doors who have been huge role models to me and helped out so much.”

“For all the younger surfers reading this, don’t let anyone tell you you can’t,” Billy shares. “If you have a dream … chase it. If you believe you can achieve that dream then go after it.”