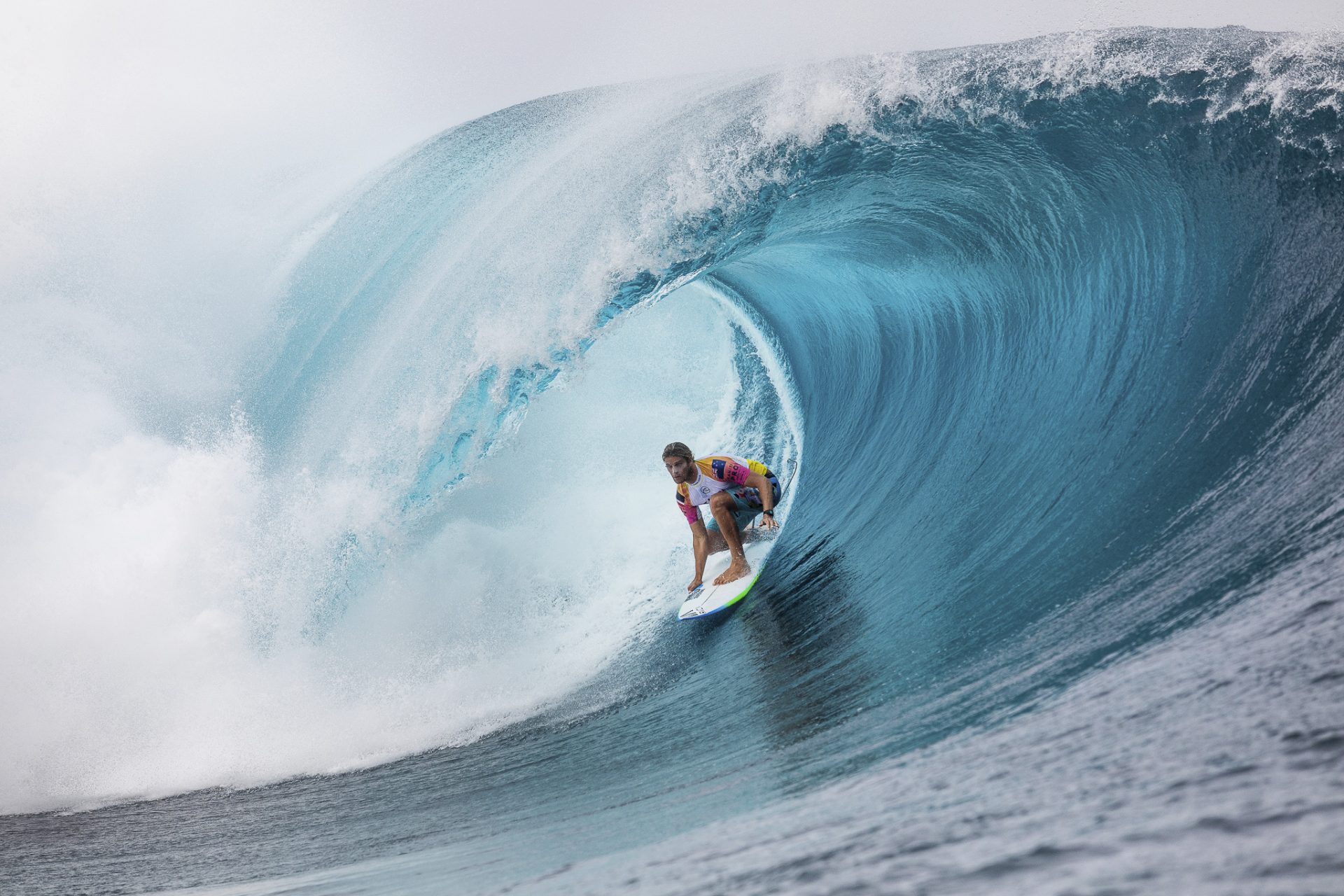 Owen Wright caps off a remarkable comeback with a win at the Teahupo’o reef pass in the Tahiti Pro presented by Hurley. Wright, who suffered a traumatic brain injury at Pipeline in 2015, took down an in-form Gabriel Medina to claim the Tahiti title for his first time.

A sleepy start in his match-up against South African powerhouse, Jordy Smith, saw Ricardo Christie slip into a familiar frustrating situation during his Round of 32 heat. Most Kiwis would have been urging Ricardo Christie to channel his Mahia Spit savvy knowing that he should have had enough muscle memory to nudge past Smith. But with only one wave score in the right range during his heat, and relinquishing priority to surfers in the following heat, Christie sealed his fate for another 17th.

Wright claimed his first event win in Tahiti after defeating Medina, who was the two-time WSL Champion and defending Tahiti Pro winner. This is Wright’s first CT victory since the 2017 Quiksilver Pro Gold Coast when the Australian inspired the world.

“I can’t be happier,” Wright smiled from the podium. “Gabby was always going to be the toughest match-up and I had no priority and I snuck into those few on the inside. I tried to get as deep as possible and still make it. I teared up out there when the hooter went. I’ve been working hard and I am stoked to win.”

“Gabby was always going to be the toughest match-up and I had no priority and I snuck into those few on the inside. I tried to get as deep as possible and still make it. I teared up out there when the hooter went. I’ve been working hard and I am stoked to win.”

In a rematch of last year’s Tahiti Pro Final, goofyfoots Wright and Medina battled once again at Teahupo’o but this time in heavy barrels. After a slow start, the heat turned into a barrel shoot-out at the 20-minute mark and saw both surfers go wave-for-wave. Medina broke away with a 7.83 and backed it up with a second seven-point ride, but Wright fought back with his own 7.73, only needing a 7.21 to win with eight minutes left. Under priority, Wright scored a near-perfect 9.17 to steal the title from Medina.

“I said I really wanted Gabby in the final just to have that rematch and it was such a special time last year,” continued Wright. “The waves were just so perfect and to share that with a great mate was really special. When you come out here and in your first heat you get a 10, it makes things feel like things are coming. I haven’t won since Snapper and it has been so long. I won so early back then in my recovery and it has been so up-and-down and it has finally felt up and up and up in the last few months. I’ve tried to win this event a lot of times and it is amazing to finally get that today.”

Medina was not able to defend his title in Tahiti but still has the opportunity to defend his win at the Freshwater Pro pres. by Outerknown, the next stop on the WSL Championship Tour. The second-place finish vaults him up to fourth on the Jeep Leaderboard and another step closer to a third World Title.

“Owen really deserved that one,” admitted Medina. “He started the day off with a 10-point ride and when someone starts like that, I think you feel like it is going to go your way. I am happy for him and stoked to be in the final against him again. Last year it was me and today he got me. I love to compete against him, he is one of the best so it was good to get second to Owen.”

“Owen really deserved that one. He started the day off with a 10-point ride and when someone starts like that, I think you feel like it is going to go your way. I am happy for him and stoked to be in the final against him again. I love to compete against him, he is one of the best so it was good to get second to Owen.”

The Tahiti Pro for 2019 had plenty of highlights. For Medina, fresh off a win at the recent Corona Open J-Bay event, he got to watch every surfer who sits above him on the rankings fall out of the draw in the early rounds. His best performance came in his Round of 16 win where he posted a near-perfect heat total of 19.23 from only two waves. This score included a perfect 10.00 point ride, the first of the 2019 men’s season.

“That was a nice heat,” Medina explained. “I just feel blessed to share waves like that with Griffin (Colapinto) and it felt so good to get a nine and a ten. I’ve been waiting for this moment for the first half of the year — I love this contest, especially when the waves are like this — this is is what I live for, going left and getting barrelled.”

2015 WSL Champion Adriano de Souza, of Brazil, has only recently returned to competition after a year off with a career-threatening knee injury. In 2019 the tour veteran has struggled to find the form and the consistency he is known for, but in the seriously critical surf of the Tahiti Pro, de Souza put to bed any question that he’s past his best, taking down countryman Italo Ferreira in one of the heats of the year with de Souza’s 17.87 two-wave total too much for Ferreira’s 16.83. He then booked himself a spot in the Quarterfinal with a dominant win over Frenchman Joan Duru with another excellent heat total, this time 17.50.

The World Title race was sent into a tail spin with the top five dealt 17th and 13th place finishes.

First to go was the current Jeep Rankings Leader Kolohe Andino, of USA. He was dealt a blow to his title hopes, going down to 17-year-old Tahitian wildcard Kauli Vaast. Andino controlled the heat in its entirety until the final minutes when the local youngster swung on an inside slab and pulled in to take the lead and the win. Vaast was eventually eliminated by his hero and friend Jeremy Flores, of France.

2019 season standout Kanoa Igarashi, of Japan, was dealt his worst result of the year, going down to an in-form Jadson Andre, of Brazil, to finish 17th. Andre put on some of the best performances of his career to move into the quarterfinals and guarantee his best finish of the 2019 CT season. Fellow Brazilian Filipe Toledo put on one of his best Teahupo’o performances to move into the Round of 16, but was then eliminated by 2019 rookie Seth Moniz, of Hawaii, in equal 13th. That was still enough to see Toledo move past Andino into the top spot on the rankings.

With the top five stumbling and an injured John John Florence, of Hawaii, sidelined as he recovers from knee surgery, 11-time World Champion Kelly Slater had a massive opportunity to boost up the rankings at one of his pet events. And in flawless barrels — his specialty. Unfortunately for the 47-year-old Floridian, his event came to an end at the hands of an in-form Jack Freestone, of Australia, dashing Slater of the chance to record a sixth event win in Tahiti.

“I’m upset but that’s just how it goes. I think this result will take me out of the picture as there aren’t enough points out there to get me in the hunt for the World Title come Pipeline … but stranger things have happened.”

“I’m upset but that’s just how it goes,” Slater admitted afterward. “Last time I surfed against Jack it was big like this at Margaret River and I kind of ‘frothed out’ and caught lots of waves while he was smart and got the better ones. I had my chance twice, but it just didn’t go my way. I think this result will take me out of the picture as there aren’t enough points out there to get me in the hunt for the World Title come Pipeline … but stranger things have happened.”

With Aussies and top 10 surfers Julian Wilson and Ryan Callinan both falling out of the draw, tube specialist Owen Wright leaps into eighth place in the rankings and puts himself in the frame for Olympic qualification for 2020.

The Tahiti Pro never fails to create drama. From the pros being taught to pin drop feet first in the event things go wrong (WSL ticking its health and safety checkbox), to the top ranked surfers being ejected by hungrier surfers, the 2019 edition captures the very best of world surfing.