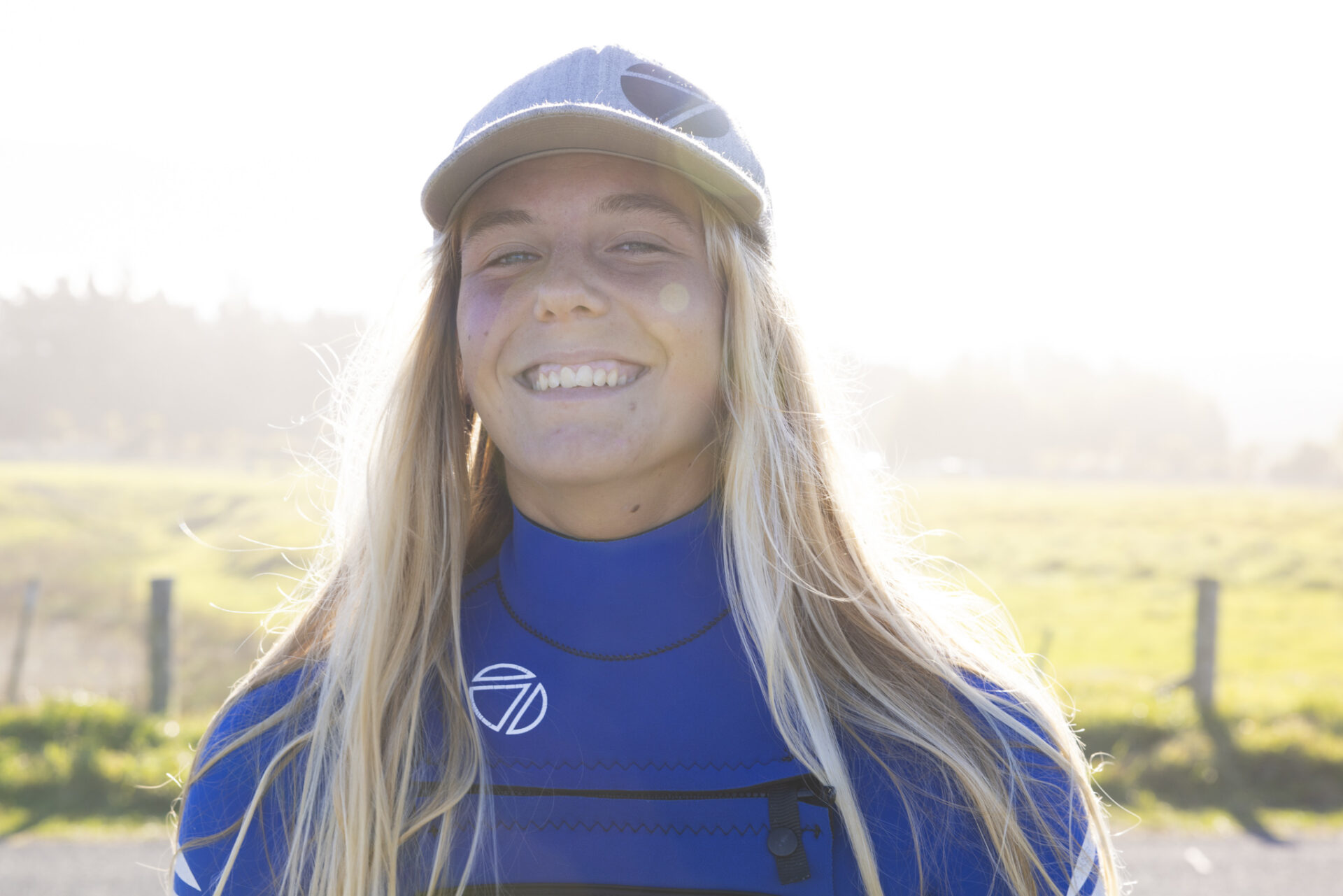 Taranaki’s next rising star, Natasha Gouldsbury, hit her straps in the early part of 2022. Not only did she qualify for three finals at the 2022 Nationals held at Westport, but she started to wind in Christchurch phenom Ava Henderson. At 17 she’s surfing with renewed energy and a hunger that looks set to take her to the world stage.

Way back before winter hit a bunch of Taranaki crew paddled out into a pristine Meatworks lineup in the afternoon light. They were paying respects to Jeremy Grainger who had passed away that week prior. They formed a circle with linked arms then splashed saltwater to cover their tears.

The lineup was all theirs as the tide shifted favourably. The session that went down was legendary and Natasha was leading the charge.

“It was just such good vibes last night, everyone went in and we just paid our respects to him,” Natasha recalls.

She speaks with a laid back Taranaki drawl as she tells me why she thinks her surfing has found another gear.

“It’s been quite good because we’ve got our little Taranaki Grom Squad going,” she smiles. “We all just build off each other and do mini heats with each other. Especially with Skylar (McFetridge) – seeing how good she’s getting makes me want to be better.”

She said her love for surfing was stronger now than it had ever been.

“I really love free surfing at the moment,” Natasha explains. “Just going out, smashing a couple of waves – especially down at Stent – surfing perfect right handers and getting to practice anything you want.”

Natasha lives in the suburb of Bell Block in New Plymouth, so she has to travel to surf.

“It’s pretty good because I’ve got my restricted licence and can go wherever I want now,” she laughs. “Normally I just hit Fitz or Back Beach, but when I get the chance I go down the coast and get some good waves. Stent is my favourite – one hundred percent.”

“I had tonsillitis the whole time,” she admits. “Surfing three finals on the last day kind of took it out me. I knew that I was getting my tonsils out as soon as I got back. Then I went home, got them out and had two weeks off. I didn’t surf at all and then went to the Mount, and surfed once before my first heat.”

Natasha won the Billabong Grom Series event in Mount Maunganui and then went on to win in Whangamata and then got second to Ava Henderson at Piha. She laughs about their rivalry.

“When we’re out in the water, we’re like devils. But when we come in, we’re best friends again.”

“If I don’t win, then I hope Ava wins – we are such good mates. When we’re out in the water, we’re like devils. But when we come in, we’re best friends again.”

That string of results put Natasha back in the frame to represent New Zealand again – she was selected for the New Zealand team in 2019, too.

“That was my goal for the year,” Natasha explains. “At the start of the year, after Nationals, I was like, ‘Oh, I don’t know how this is going to go’. And then I got a couple of good results. We ended up with quite a good team this year for El Salvador – the righthand point breaks suit us – especially the Taranaki crew.”

Natasha was one of four Taranaki surfers selected in 2022 alongside Spencer Rowson, Skylar McFetridge and Kalani Louis.

“It was pretty sick to have four Taranaki surfers in the team,” she states.

“El Salvador was the trip of a life time – warm water, hot weather and a great team,” she offers. “I really enjoyed traveling to somewhere totally different and half way across the world with some of my best mates. We got to surf pumping waves before the event at Punta Roco – that was super fun as well and we got to surf it before the comp started.”

She said a great team vibe contributed to the whole experience.

Natasha said the support from home was huge even though her family wasn’t over there with her.

“I knew they had my back the whole way through the trip.”

During the event Natasha’s team mates Pia Rogers and Ava Henderson became very ill, which forced her to move rooms to avoid also getting sick. But it was some news from home that devastated Natasha before she first pulled on the rashy.

“A couple hours before my first heat I had got a message from home telling me that one of my friends had passed away,” shares Natasha. “I didn’t have much time to actually think about it before my heat because all my focus was on that first heat – I was so nervous about it. After my heat and later that night it really hit me. I started to think about it a lot more. Having two people who I was close to pass away in such a small period of time was pretty hard for me. I was thinking about all the what ifs and asking myself, ‘what did I miss?'”

“A couple hours before my first heat I had got a message from home telling me that one of my friends had passed away … having two people who I was close to pass away in such a small period of time was pretty hard for me. I was thinking about all the what ifs and asking myself, ‘what did I miss?'”

Natasha said she had a great support system around her, but not having her family there made it tough.

“The rest of the way through the contest was quite hard as my mind was on that a lot of the time, but I tried to put my best foot forward in every heat,” she remembers. “In my head I was thinking that I was there for a surf contest and my goal was to surf the best I could in every heat. The team didn’t really know what had happened. Some people knew, some people didn’t. The coaches were really supportive and I knew they were there if I wanted to talk about any of it. I knew that my family was right behind me the whole way and I would be able to talk to them no matter what time of the day it was back home.”

Natasha is one of five girls in the Gouldsbury family.

“I’ve got a twin – she doesn’t surf, but is more interested in school, then Mandy who surfs and then two older sisters who don’t surf,” Natasha explains.

One evening before a longboard heat in Westport I came across Natasha and her younger sister, Amanda, 15, wrestling in the sand. It looked like some warm-up routine with a hint of sibling ferocity about it.

“That was before the longboard,” laughs Natasha. “Longboard is more her thing, but shortboard is my thing. We have a good rivalry and it’s good to have someone to surf with. Even when there’s no one else out Amanda will come out. I really enjoy traveling around with her.”

Natasha is in her final year of high school.

“My plan is just to stick out this year and finish off school,” she reveals. “And then at the end of the year, I’ll see what’s happening. I can still do Pro Juniors up until I’m 20. So I might hit those first and then the QS after that. Or maybe both at the same time. I’ll just see how things go – I can base myself over in Aussie too, with my board sponsor, 1-DA Shapes. They have supported me all the way through, since forever. I also get support from Seventhwave wetsuits. I love their wetsuits, they’re so good. And Beach Street Surf Shop have been with me for so long … like forever.”

It’s quick to see why sponsors love Natasha – she’s quick to pay them respects and appreciates their support. She interrupts me to tell me about The Hori – an artist and gallery that got behind her surfing recently.

“He does artwork and he has a massive gallery,” Natasha explains. “He moved to New Zealand a couple of years back. I just saw him at the beach once and he approached me and was like, ‘Oh, would you like to be on our team?’ And I was like, ‘Oh yeah, what do you do?’ He was like, ‘Oh, we do artwork and stuff’. And both times I’ve been to Worlds, he’s raffled off this massive, big woven art piece worth $1500. Which is so nice. I can’t thank him enough for it. Then I’ve got Smoothstar Skateboards, Coastal Chiropractors, and Noxen. I love all my sponsors and don’t know what I’d do without them to be honest.”

“I’m just trying to put my best foot forward for them.”

I ask Natasha what her ambition is in surfing.

Those steps should be familiar to Natasha considering local Taranaki surfer Paige Hareb has competed at the very top of the surfing world for the past 12 years.

“Paige does inspire me, but she’s never home, so it’s kind of hard to learn from her,” Natasha admits. “When she’s around she often does some of the club comps. It is quite good to compete against her and see her strategies and things like that. She’s an excellent competitor. She’s so head down and focused – it’s unbelievable.”

“I can’t even begin to say how much support I get from my family. It used to be my dad taking me all around and now he’s working every day. Now mum basically drops everything and takes us to comps. I love them immensely and my sisters too, all four of them. It’s so good to have some people in my corner who fully believe in me.”

Like Paige, Natasha has the full backing of her family behind her.

“I can’t even begin to say how much support I get from my family,” she explains. “It used to be my dad taking me all around and now he’s working every day. Now mum basically drops everything and takes us to comps. I love them immensely and my sisters too, all four of them. It’s so good to have some people in my corner who fully believe in me.”

She tells me that she also gets a lot of support from people throughout Taranaki and New Zealand – even her old home town.

“Levin is not a surfing town, but there are some people who still message me and still back me,” she smiles. “That’s always heartwarming.”