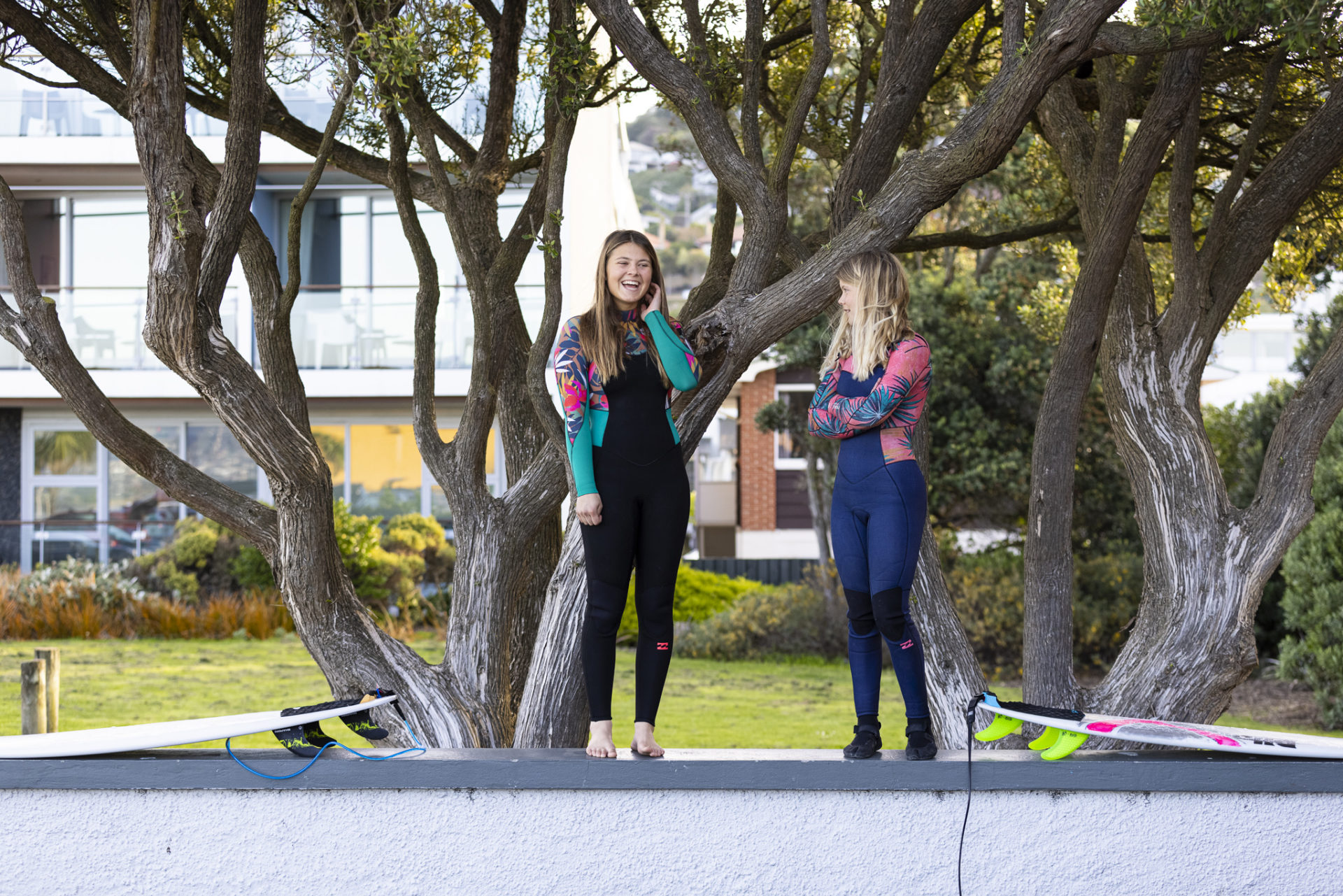 We test out Billabong’s custom design your own wetsuit concept using two of its women’s Synergy 4:3 steamers. Yep, you can choose your own panels and colour ways – be the designer of your own suit. Seems so good it surely can’t be true …

The idea of choosing the colour and pattern designs for your very own custom wetsuit seems the stuff of dreams. Who doesn’t want a unique wetsuit? But think about the logistics of actually producing them for a customer. That’s the quagmire that has previously ruled any sort of customisation out for most of the big surf wetsuit brands … especially at a price of just $370.

Okay, New Zealand’s very own Seventhwave Wetsuits has managed to make a mainstay out of custom suit production over the years. And it goes a step further by actually providing a custom fitment as well. But they’re not cheap, but if a fit like a glove suit is what you’re after then they’re your best option.

With Billabong’s custom suits the shape of the wetsuit is straight off the rack, so if you’re an average build then you’ll be right on the money. We went for two women’s Synergy 4:3s, but to be honest suits in Dunedin need to be at the very top of the technology tree to survive a winter here. We had our doubts that a $370 suit would make the grade. But surely it would be fine for those warm, sunny days on either side of winter. We anticipated them becoming shoulder season suits for our test surfers: Taya, 16, and Rewa, 14.

Actually, this was harder than we thought it would be. Not from the Billabong side – the online interface is really cool and you get a real-time 360° revolving image of your new custom suit each time you make a change. It makes for a really fun interactive experience. You get loads of options for the various panels and the girls had some fun designing some of the ugliest wetsuits we have ever seen before honing in on their final choice. But design is tricky – especially with so many combos and ideas.

“The designing process was super cool and unique,” Taya explains. “There were plenty of colours and patterns to choose from so it took some time to find a design I really wanted. Overall, though I really enjoyed the experience and I definitely recommend it to anyone who is looking for a good quality and unique wetsuit.”

“It was pretty cool being able to create our own custom wetsuit,” Rewa adds. “There were heaps of designs – it took a while to find the one I was really happy with, because there were so many cool patterns.”

Once the girls had settled on their designs the order was as simple as any online order. The girls received confirmation and then waited for the wetsuits to be created. We were told to expect 7-10 weeks for the wetsuit to arrive and we thought that might be optimistic given all the shipping issues with Covid. It did take a little longer in the end, but we had great communication from Billabong to let us know.

When they did arrive they were packaged in a brown protective cardboard box with the minimal of plastic packaging. And to the girl’s delight their designs were right there on the new suits just as they had ordered them. It’s always nice to have new rubber, but to receive a wetsuit featuring your own design is pretty special.

Rewa went for the size 6, 4:3 Synergy wetsuit and the fitment was really good with no baggy areas at all.

“It wasn’t too tight or too loose anywhere and the water didn’t flush through the arms or legs,” she explains. “The neck was also really well designed and didn’t flush me at all when duck diving. It has a really tight fit and it did give me a bit of a rash around my neck, but easily fixed with rash cream and better than a winter flush here in Dunedin’s cold water.”

Rewa also said the wetsuit had plenty of flex and was really easy to surf in.

“It feels good when I’m paddling, but there is one side that gives me a small rash by my shoulder,” she reveals. “A bit of rash cream on that and I don’t even notice it’s there. The seaming is otherwise really good.”

Taya went for a size 10, which she thinks was a tad too big for her in the end. She also bought the top of the line Furnace Comp 4:3 in a size 8 for winter, which had a superior fitment for her. Incidentally Billabong’s sizing guide indicated the 8 would be the right size, but Taya is quite tall so opted for the 10 in the Synergy.

“I initially thought this wetsuit would just be suitable for summer because of how low the price was so I went for the 10,” Taya recalls. “When the wetsuit arrived I was really impressed with how well it fitted even as a size 10 and particularly that it still didn’t let in any water while surfing. During the winter the water gets very cold here in Otago and this suit kept me warm for over an hour of surfing. With the Comp Furnace I can surf for at least two hours through winter.”

“The Synergy may not be top of the line but it is still very flexible and easy to get on and off,” Taya adds. “It features a very tight seal around the neck which completely stops any water getting in during duck dives. The suit is easy to paddle in with no tight spots or baggy areas that can hold water. The only downside for me with this wetsuit was getting a rash from the arm seams – probably the only tell-tale that the 10 was a smidgen too big for me. The rash went away pretty quickly with a bit of rash cream.”

This was probably the biggest surprise for us with the $370 Synergy 4:3 – it is actually punching way above its weight for warmth. We put this down to the generous use of graphene, which is Billabong’s tech fabric that uses Nobel prize-winning technology to maintain warmth and without sacrificing added weight. You can read more about graphene in our in-depth review of the men’s Billabong Furnace Comp 4:3 here.

The graphene isn’t used as liberally as we’d have liked, but it lines all the core temperature areas of the torso – enough to raise the performance level of this suit significantly.

“The wetsuit is really warm, even in Dunedin’s 10℃ winter water temperatures,” offers Rewa. “It’s definitely the warmest wetsuit I’ve had in a long time and I can surf for ages at a time in it. Compared to my O’Neill Hyperfreak 4:3+ wetsuit that I also am using at the moment – and also a very good suit – the Billabong one still has the edge. I suspect the Hyperfreak is a size too big for me right now though as it has been flushing me a lot.”

Living With The Synergy

There is another advantage with the use of graphene and that is this suit’s drying ability. The graphene material is super lightweight and doesn’t seem to trap water like other suits – it stays light even when wet and that’s a huge advantage over a long surf.

“The Synergy dries really fast and I managed to get two surfs a day and both in my Billabong wetsuit during lockdown Level 3,” offers Rewa. “My wetsuit is always dry or nearly dry each time I put it on, unless I’ve left it outside in the rain overnight. It’s also easy and quick to get into, which is very good for when the surf’s pumping. Even if my wetsuit is wet from being left in the rain it’s still not too difficult to get on. It also doesn’t get too heavy when it’s wet, so it is easy to carry around and doesn’t bog you down when paddling.”

Another area that has impressed us has been the durability of a suit that has seen a lot of use over winter. The girls both surf a lot and are quite hard on wetsuits.

“During the time I’ve had this wetsuit it hasn’t torn at all or got any holes,” Rewa comments. “The seaming is done really well and so far it hasn’t split or torn at any of the seams. Usually the elbows wear out first on my wetsuits, but this one isn’t showing any signs at this stage.”

Billabong suits haven’t always had the best reputation, but the Synergy falls into line with the Furnace Comp 4:3 we tested earlier in the year. The build quality is certainly there, the addition of graphene is a game changer for warmth and it might not be quite as flexible as other comp suits, but it’s nothing like the chunky 4:3s of a few years ago. And did we mention it’s only $370?

The fact you can choose your entire colour-way and have it arrive at your door 7-10 weeks later is the stuff of dreams. But it’s clearly not a gimmick with the build quality and tech ready for a Dunedin winter of waves.

“Overall the Billabong custom wetsuits are really good, comfortable and it’s so cool that you can make your own design,” Rewa concludes. “It has kept me super warm over winter and hasn’t ripped, leaked or deteriorated at all. I really like the zip going the other way, too (towards my right shoulder) because with my other wetsuits the zip goes the other direction and sometimes can undo. This one hasn’t gotten stuck at all and hasn’t come undone. Good job Billabong.”

“I was expecting a summer only 4:3, but loved that it is equally as capable for a Dunedin winter,” adds Taya. 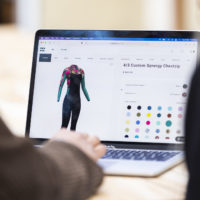 The Billabong Custom 4:3 Synergy is by itself a great suit for the price. We didn't expect it to handle the demands of Dunedin's winter lineups, but they handled it well. Taya also tested a 4:3 Comp Furnace women's suit and that was superior in warmth and flexibility and at a $549 price tag. But for $370, the Synergy 4:3 offers extraordinary value. It hasn't leaked, torn, stretched or flushed despite the abuse handed out by Taya and Rewa. The fact that you can customise so many of the panels is an added extra. Yes, there is a novelty factor with the custom design tool, but with the suit being such a strong performer and the custom execution so on-point we reckon this is a complete bargain. We reckon Billabong has shaken its wetsuit reputation completely with this one. Other companies are still producing ho-hum women's suits, devoid of technology and certainly a long way from this new custom design space. Billabong has created an innovative customer design interface that is underpinned by a really great suit. Set your imagination alight and bring your best design skills to the table.