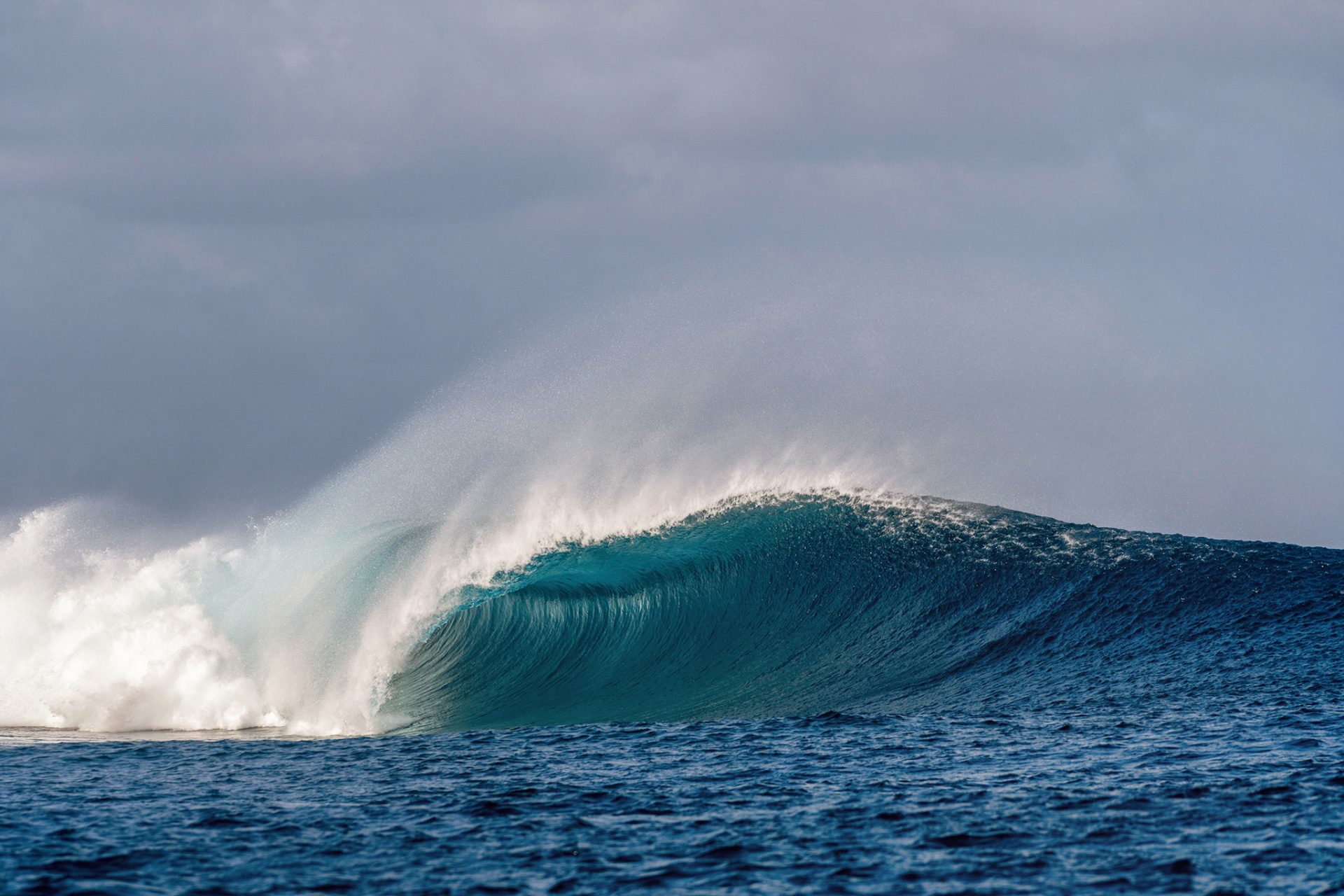 Southern surf photographer, Hayden Campbell, ditches his hood, steamer and booties in favour of some Pacific Island charm in the form of the crystal blue waters of Cloudbreak. Camera in tow, here’s his first story for New Zealand Surf Journal, directly from the coral heads of one of our most favourite reefs.

It’s 6:15am and 26 degrees Celcius. Selfie-taking tourists are beginning to flood the perfectly groomed beach and the speedo count is well on its way to a dozen. The frigid water and single-digit air temperatures of my home in The Catlins couldn’t be further from my mind as I make the short pilgrimage from our unit to the dock where I am scheduled to meet the resort’s boat driver at 6:30am.

A man, who by any other country’s standards, would be considered a giant, smiles and waves me over to the edge of the water. Joined by four other greedy surf pigs we are herded mostly by hand gestures into a relatively seaworthy looking long boat.

The local surf guide Vaughn, pushes us into deeper water and we begin the 25-minute cruise past Tavarua and on to Cloudbreak. I have long had a fascination with Cloudbreak since watching the now iconic film Kelly Slater In Black And White some 20 years ago. I watched it today … it still holds up!

​”Looks flat mate,” I hear from a Canberra native in the back. I’d been thinking and dreading the same thing, but a seasoned Straya surfer from Sydney soon offers “na mate, just the low tide hiding the white water from the horizon, it’s gonna be on”.

I felt oddly relieved by this veteran’s confidence in the forecast and 15 minutes later the whitewater began to appear on the horizon as Tavarua drew closer.

A quick drive by Restaurants, which had barely a ripple on it, and past the iconic judging tower we were greeted with eh … err … not much really. A quick scan of the 15 guys on it had them sitting fairly well up the reef so before I curled up into a ball and cried myself to sleep I waited. Less than a minute later faint hoots sang out like little angels over the still-idling outboard. Weapons were unsheathed and sunscreen flew around the boat like shrapnel as each occupant spilled out in to the 27-degree Celcius water. Easily overhead peaks ambled down the reef, hit the inside and spun themselves stupid. Mt Straya friend was right, it was in fact “on”.

Before I curled up into a ball and cried myself to sleep I waited. Less than a minute later faint hoots sang out like little angels over the still-idling outboard. Weapons were unsheathed and sunscreen flew around the boat like shrapnel as each occupant spilled out in to the 27-degree Celcius water.

While this is not my first experience with coral-reef surfing it is my first time as mainly a photographer. A meniscus tear and consequential surgery has kept me out of the water for over four months – not the best preparation for your first swim at decent Cloudbreak.

With that in mind I watched as the same three to four guys traded tubes for 15 -20 minutes. I had a fair idea by now where I needed to sit to get the images I came for. The first thing that strikes you when exiting the boat is the water clarity – it’s pretty surreal especially coming from somewhere with zero visibility most of the time.

I swam and shot relatively unscathed for over an hour before that familiar burning in my knee set in. I retreated back to the boat with the biggest, dumbest grin on my face. I knew I had images and the experience I had come for. I could have gone home right then a happy man.

A quick change of equipment and Vaughn, the head surf guide and all round good bugger, had us sitting well inside the other boats and mostly out of harm’s way from the oncoming end section, which was detonating on to the reef barely three feet below.

“You get the good picture from here, bro.”

I didn’t know how lucky I was to have Vaughn in my life until the next day with a new driver. He gazed at me with eyes that looked like piss holes in the snow and then simply declared: “drink kava til 4am”.

And with that he moored up a few hundred meters from the break, fashioned a nest out of empty board bags and went to sleep. The surf wasn’t particularly photogenic that day so I kept my protest to myself … well, that and he was three times my size. Got to pick ya battles, eh?

I didn’t know how lucky I was to have Vaughn in my life until the next day with a new driver. He gazed at me with eyes that looked like piss holes in the snow and then simply declared: “drink kava til 4am”. And with that he moored up a few hundred meters from the break, fashioned a nest out of empty board bags and went to sleep.

But with Vaughn at the helm i​t was pretty much fish in a barrel at this point. Vaughn maneuvered in and out and dodged the odd wide one while I gleefully shot the almost fluorescent tubes lighting up the reef. There was no shortage of talented surfers in the water thus completing a surf photographer’s ultimate trifecta: good light, good waves, good surfers.

One standout surfer was 18-year-old Italo Mesinas, of Malibu, California. I am not 100 percent sure what I was doing at 18, but I am pretty sure it wasn’t getting barreled off my tits at Cloudbreak. Classic backhand tube styling and totally in sync with the ocean.

Several hours and several thousand clicks later we gather our party of four from just off the reef. They clamber aboard exhausted, but smiling ear-to-ear. The post surf breakdown continues all the way to the dock with the general consensus being, “it was cooking”. We disembark, say our goodbyes and I make my way back to the unit. The resort is in full swing by now and hundreds of people are scattered along the beach and resort grounds like ants. It’s 30-something degrees at this point and my boat back to the mainland leaves in two hours. The adventure draws to an abrupt end.

I spend the remainder of my time in this tropical playground of the wealthy not reflecting on the morning session, but thinking about the waves I had missed at home.

The sinking feeling and mild depression you get when leaving a place with waves like Cloudbreak was completely replaced by my excitement to get back to the 10 degree Celcius water and howling southerlies.

Don’t get me wrong, a once-a-year jaunt to the islands to wear boardies and jandals all day and surf warm water perfection is nothing short of epic. But there is just something about cold water surfing. Perhaps it’s the amount of motivation and dedication you need to pull on a 5:4, hood and booties in the middle of winter to get out there that makes it just that bit more gratifying.

Until next time Cloudbreak …

Hayden is a professional surf and wedding photographer living in the beautifully isolated Catlins of New Zealand's southeastern coastline. Dedicated to and passionate about the area, he has been surfing there for more than 20 years and shooting it for six.