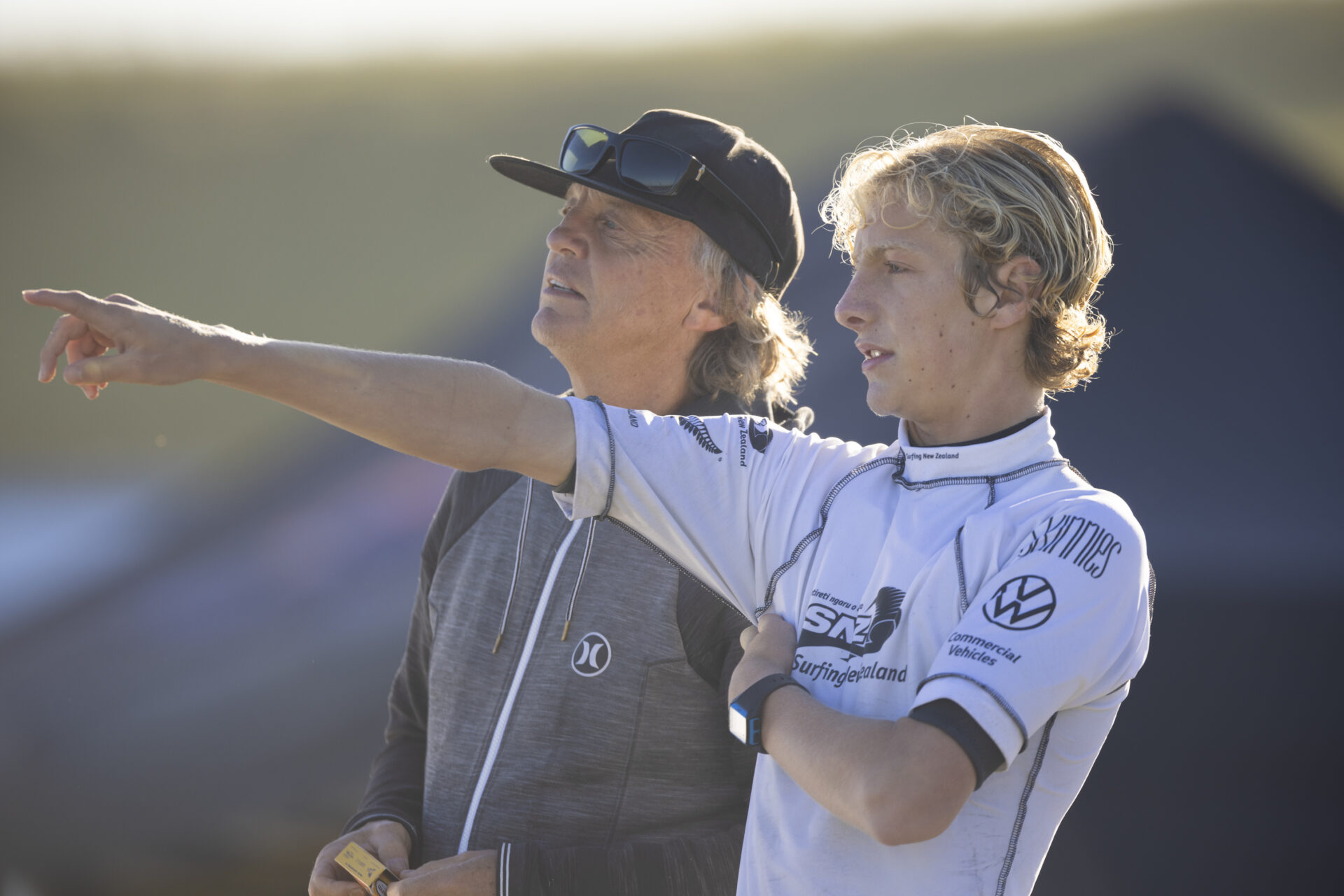 At the Nationals this year in Westport one surfer stood tall among so many. It wasn’t just because of the seamless lines he’d take on his waves, or his ability to surf a variety of craft, but for his consistency in his heats, and as a great human. At 15, Jack Tyro is bringing a whole new approach to surfing and it’s paying off for the Sumner surfer.

It’s easy to look at Jack’s record-breaking three titles from the 2022 NZ Surf Nationals and be impressed, but there is even more depth to this rising star than a cabinet full of silverware.

Let’s start at Jack’s home break in Sumner, Christchurch, where the waves are mostly flat and featureless – to the point that it has become a focal point for the retro and longboard revolution that thrives there. Despite that it continues to produce some of the very best surfers in New Zealand.

“Taylor’s Mistake has pretty good waves,” he grins. “Taylor’s is my go-to really. We sometimes surf out on the Akaroa Peninsula, but normally we just go up to Kaikoura. I love Kaikoura’s waves. It takes about three hours and it’s always worth the drive.”

Jack first tried surfing at two, but he didn’t get right into it until he was seven.

“I used to surf with Benji Lowen a lot, but then he moved to Aussie and so I’ve been going with everyone, just chilling with all my mates from Brighton and Christchurch and everywhere,” he explains. “We’ve got a pretty good crew.”

“I’m just trying to get into the habit of going out every day and just hanging at the beach.”

On the days when Sumner is onshore and rubbish, Jack still heads out.

“I go longboarding a lot, because sometimes it’s pretty small at Sumner, but that’s pretty fun on a longboard,” Jack shares. “I think longboarding helps with learning to control a board a bit more as well.”

There are three key things that set Jack’s surfing apart from his rivals: speed, power, and flow. He has all three. He surfs fast, draws incredibly clean lines on a wave and is never afraid to hit the biggest sections.

“I try to focus on bigger moves but, it is a bit smaller in Christchurch usually,” he admits. “Whenever a good section comes, I just go for it. I don’t have much to lose when it comes to a heat. And it feels like so much fun. When you land them, it’s just like, ‘yes’. It’s a good feeling.”

He reckons his speed has come from surfing in Sumner.

“I try to surf fast where I can,” Jack tells me. “In Sumner, you must get everything out of the wave – you must learn to milk every bit of power from it. I think that helps me.”

As much as it makes his surfing exciting to watch, it also translates to results in surf contests.

At the most recent 2020 National Scholastics Jack won the Under 14s.

“That was a good win for me,” he explains.

That set in motion a pattern of self-belief that would see Jack lift right through into the Westport Nationals where he would become the first surfer ever to win three titles.

“Winning the Under 18 Longboard title was one of my main goals at the Nationals, but to win the Open Longboard as well was unbelievable,” admits Jack. “It just put me into such a stoked mindset. I felt no matter the result of the Under 16 shortboard I knew I would go home happy. So, with these two titles in the bag, it freed me up to cut loose, go all out, and not hold back.”

He said it also helped having surfed the earlier finals to be tuned into finding the better waves.

“I already knew what to look for and where to look,” he said. “I hope to do the same next year that’s for sure.”

While it wasn’t on his radar initially, his Nationals’ performance catapulted Jack into the New Zealand Junior Team.

“It happened so fast,” he explains. “I started off the year hoping to just win a national title – I was unsure if the New Zealand team was even going to happen. Now that I have been selected it has all of a sudden become a reality.”

“To think that I’m about to go up against future world champions is crazy. My ambition is to surf the best I possibly can, battling through every heat to do New Zealand and myself proud.”

Jack said that since his triple title win and team selection, not much had changed.

“Life at home is still the same, it’s not like I don’t have to do chores anymore,” he laughs. “I find now I get asked for comments and opinions on things – I’ve even had a request and appeared on a TV show.”

“One thing I know for sure is I won’t be able to fly under the radar at the next Nationals, especially with the older guys in the Open Longboard,” he smiles. “I feel I’ll have quite a big target on my back.”

At the Nationals, Jack was also able to catch up with Steve Morris who shapes his longboards.

“He has been sponsoring me for the past year now and it has been a privilege riding his longboards,” Jack adds.

Christchurch brand Exit Surf has also been behind Jack since the very early days.

“They’re really good to deal with and have been helping me through all my years – even when I wasn’t officially sponsored,” Jack smiles. “They sort me out for boards and wetsuits, gear – everything. They sometimes help me with my surfing as well and just support me with all that kind of stuff, too. They’re a local, iconic New Zealand brand and it’s such a good brand to have on my side.”

He also tips his hat to the efforts of his mum and dad, Jen and Steve. His dad is a seasoned competitive surfer himself with a penchant for adventure surfing. He and Jack have a special relationship around the surf comps that is clearly a winning formula … and not just in terms of results.

“Dad took me to all of his surf comps when I was little, and now he takes me to mine,” Jack begins. “Dad has competed in comps since he was a kid, too. He knows the little things needed to prepare for a comp. As well as shortboarding, he also introduced me to longboarding and taught me that 5s, 10s and drop-knee turns win heats, comps and titles. We’ve been to every nook and cranny of New Zealand searching for surf. I couldn’t think of a more supportive father. I must mention however that we are very lucky that my mum and Sam put up with the both of us. I am stoked I have the support from a genuine surfing family.”

Jack said his ultimate weekend would be a surf camping trip to pumping waves.

“It would be a beach that is pumping and where we, me and all of my mates, can have a massive campfire,” he smiles. “All of us would have kitted-out vans with long and shortboards on our roofs.”

Jack isn’t one to let a record-breaking title haul go to his head. He’s calm and casual as he thinks about where he’d like his surf career to go.

“Honestly, I have no idea where I want to go with my surfing,” he reveals after a thoughtful pause. “I’m just going with the flow. Whether it’s big titles or just being a free surfer – I don’t really mind where it goes to. My outlook on life is to keep achieving my goals, whether that be in surfing or in school,” Jack explains.

“Hopefully, both lead to something fulfilling and fun.”

One thing is for sure, come El Salvador for the ISA World Juniors at the end of May, Jack Tyro is going to be rising to the occasion.