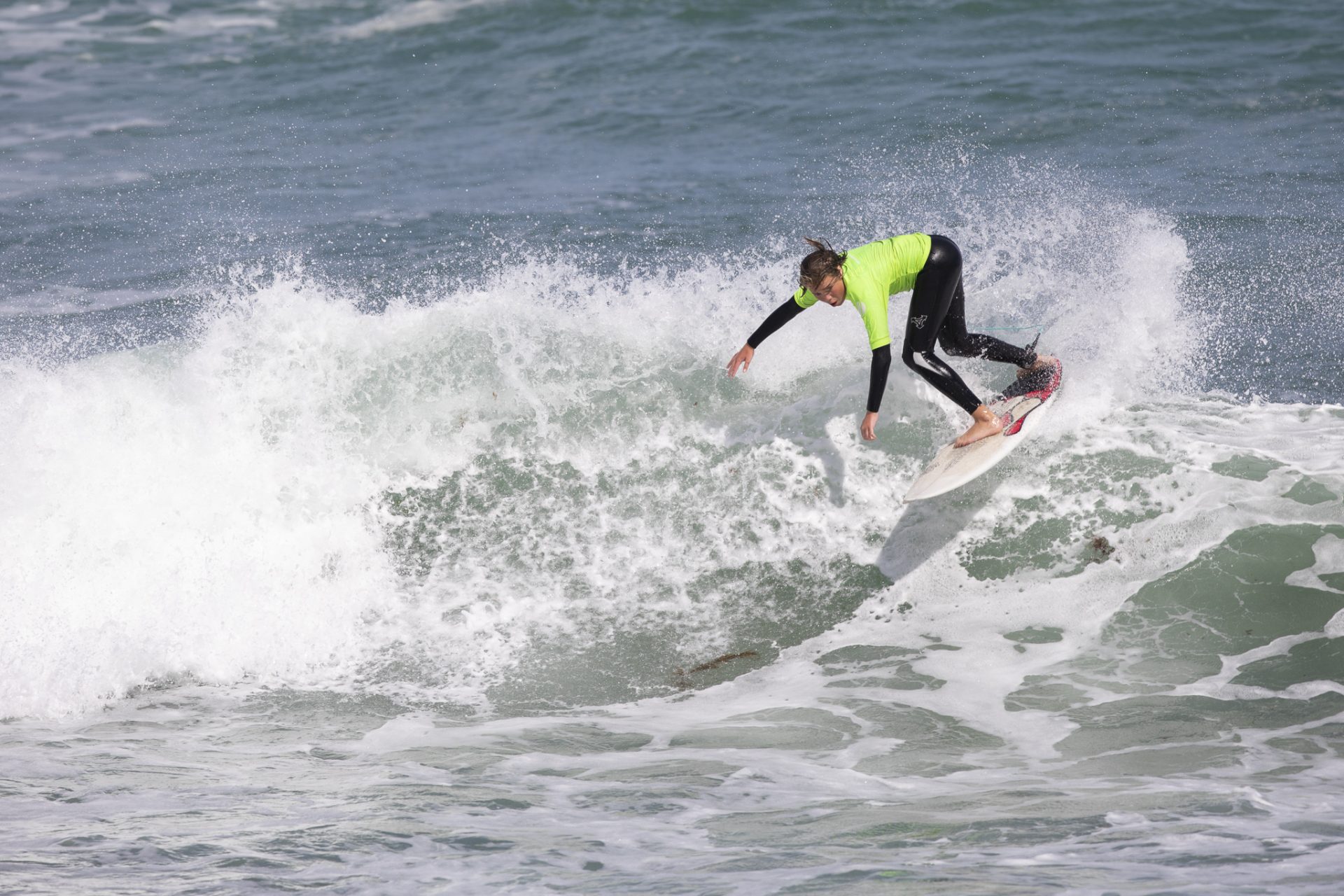 Nixon Reardon and Ava Henderson claim first blood in the opening round of the 2021 South Island Grom Series held at Dunedin’s St Clair Beach on Saturday.

With an atrocious forecast that included gale winds and an open ocean 5-6m short-period swell the decision was made early to try and run the competition in one day. A near-shore 1.5m-2m south swell and the near gale force westerly winds combined with a middle of the day high tide meant this was going to be a massive challenge.

The Under 16 boys were in the water at 7am. There were a couple of upsets in round one with two of the top seeded surfers knocked out. Jack Tyro and Tyler Perry made early exits with local surfers Karne Gabbott, Bailey Pearce, Lewis Murphy and Alexis Owen all advancing into the semi finals. The Under 18 girls had a great turnout with four heats in the first round. Round one heat winners were Ava Henderson, Amelie Wink, Tui Rudolph and Anika Ayson.

The Under 12 girls final was held early and it was Sumner surfer Amelie Clark who got a nice long left and claimed the win. A new surfer to the contest scene, Pipiatia Ritchie, put in a strong performance to claim second ahead of Anika Rudolph and Georgie Macefield.

The rest of the morning saw all the younger divisions have a go before the tide became too high with the waves smashing into the seawall and creating dangerous backwash conditions. Likely looking contenders were Alexis Owen, Benji Lowen and Poppy Entwisle all getting heat scores into the double figures.

High tide was not due until 2pm, but by 10:30am, at the start of the Under 14 girls semis, the tide had already filled into a stage where the competitors had to get in and out over the rocks by the swimming pool. The water safety team kicked in with plenty of parents in the water helping the kids in and out and this worked really well.

While the side shore wind was relentless and made for some really challenging conditions, the St Clair channel kept dished up some peeling lefthanders. As we got closer to the high tide the waves were smacking into the rock wall with such force it felt like a mini earthquake under your feet. The waves were splashing up onto the promenade and one particular wave covered the South Island Surfing Association’s  generator and, with a plume of smoke and steam, killed it. This forced the organisers to put the comp on hold while they reassessed the situation and found another source of power.

It was decided to restart the comp and put the big boys out who could handle the high tide. There was some interesting surfing with the backwash bouncing off the wall and a few skate moves came into play like the the olly. We got through all the semi finals without any major incidents. There were several stand out heat performances in the semis, but it was PST surfer Benji Lowen in the Under 12s who got the highest heat score of the day with a 14.

The finals started around 5pm and the Under 18 girls were out first. Ava Henderson came under some pressure from Jaya Reardon, but a couple of waves near the end of the heat secured Henderson the win. Lydia Hawes made the big journey down from Westport and it was worthwhile as she picked up third with Eloise Addison in fourth.

In the U18 boys final South Coast Boardrider’s Nixon Reardon had some nice flow to his surfing and a lot more power than last season. He took his first win in a SISA contest ahead of Tyler Perry, Luke Rogers and Jack McKenzie.

North Wai surfer Ava Henderson claimed her second win of the day with some power turns in the Under 16 girls final. Pocket rocket Misha Peyroux got the better of the rest and claimed second. Amelie Wink was third and Lucy Macefield fourth.

Rakiatia Tau seemed to have the Under 16 boys final under control right up to around the 16-minute mark when Northside teammate Jack McKenzie stormed back with two quick waves and just pipped Tau. Third was Alexis Owen and fourth Bailey Pearce.

PST surfer Poppy Entwisle is on a bit of a roll right now when it comes to winning comps. She made it two from two in as many weekends. Tessa Gabbott finished in second with Lenka Cargill third and Rewa Morrison in fourth.

The U14 boys was super tight with only one point separating the top three. Local surfer Lewis Murphy was another to take his maiden win on the SISA circuit. Murphy was loving the lefthanders linking turn after turn. Alexis Owen’s power turns took him into second with Benji Lowen third and Keo Morrison fourth.

Benji Lowen had to back up and do two finals in a row, but he showed no sign of fatigue and came out firing with a 6.23 on his first ride. Good mate and rival, Sonny Lyons kept within striking distance the whole way, but couldn’t find the winning wave. Best mates from the South Coast Boardriders, Keo Morrison finished in third with Jack Higgins in fourth. Their Under 12 boys heat concluded a massive day of surfing with that last heat finishing at 7:30pm.

Near the end of the day the swell starting pulsing and the waves weren’t coming in sets, but just continuously pushing through with white caps and waves all the way out the back to White island. The St Clair corner remained surprisingly contestable with 35-wave heats keeping the judges on their toes. Some very brave groms and a day they won’t forget for a while.

The Dunedin round of the South Island Grom Series was made possible with the generous support of the  Esplanade Surf School and Exit Surf. The organisers also wish to thank all the parents who made this contest possible.

The next stop on the 2021 South Island Grom Series tour is Westport on the 29th January.