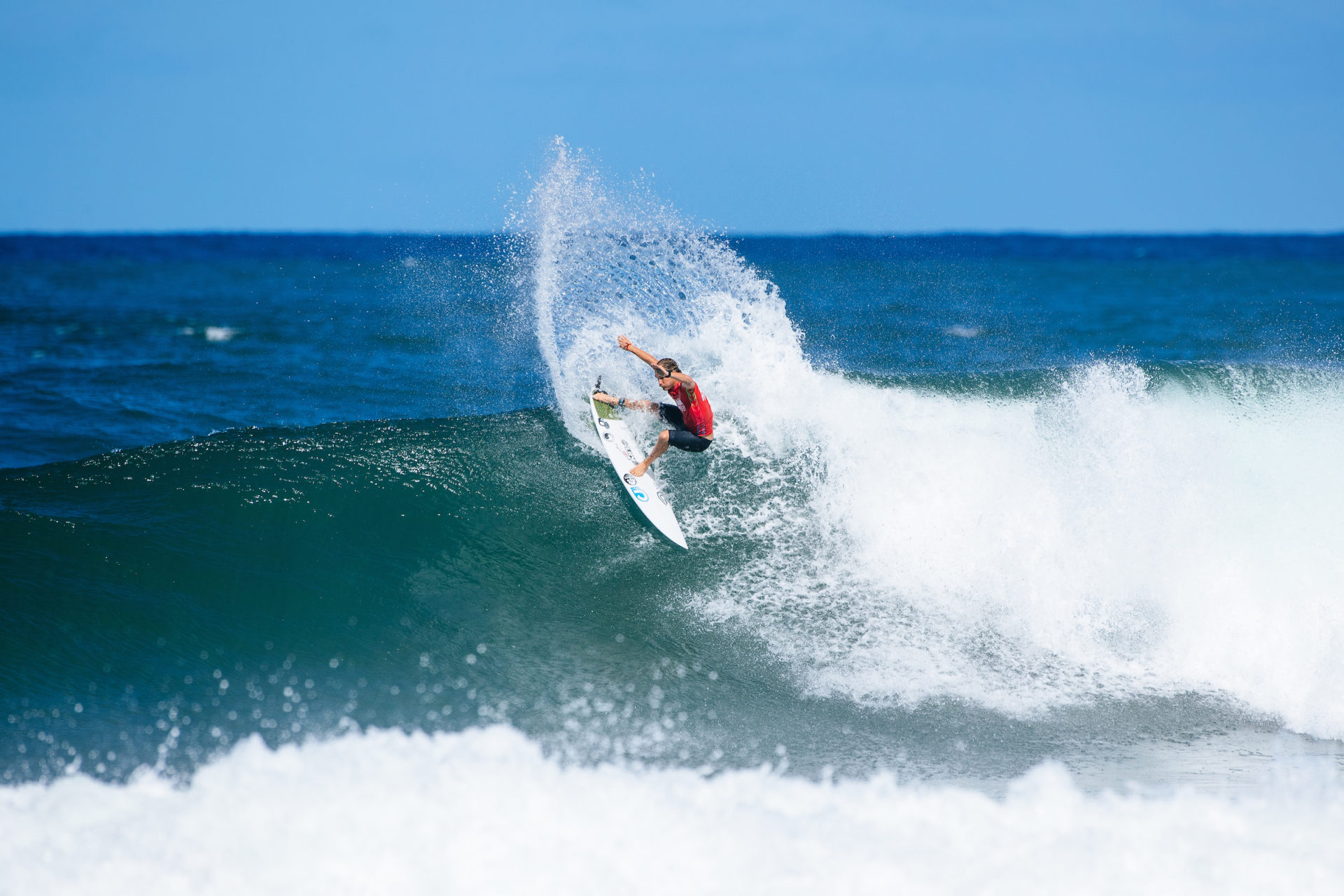 Raglan’s Billy Stairmand has bounced back from a string of shock first round exits throughout the Challenger Series to surf his way comfortably into the Round of 32 at Haleiwa, Hawaii.

It’s the final curtain of the 2021 WSL Challenger Series and the draw is loaded. That makes Billy’s journey through the round of 80 and then the Round of 64 even more treacherous. Nearly every pro surfer in the world is there to wear a rashie and fight for a ranking.

Billy’s first heat saw him up against South African Shane Sykes and local Hawaiian rippers Finn McGill and Mason Ho in solid conditions: a six-to-eight, occasional plus, foot swell delivered more than enough power for some of the elite contenders who paddled into the lineup and rose to the occasion.

Billy turned the dial right up in the grunty conditions to claim the wave of the heat with a 7.70 and took eventual heat winner Sykes right to the wire. It was an outstanding performance from Billy and sets the scene for how he intends to surf this event.

“Man I had fun,” Billy wrote of the heat. “Was good to try to open up a little on some open walls. 100% stoked to progress. Enjoying it all here in Hawaii. Very grateful. Thanks for all the support.”

In arguably the heat of the day, 2x WSL Champion John John Florence put on a highlight reel during his long-awaited return to competition alongside the Brazilian duo of Thiago Camarao, also advancing, Mateus Herdy, and Australia’s Sheldon Simkus. Florence’s near-perfect 18.30 heat total (out of a possible 20), including a 9.23 (out of a possible 10) were both the day’s best in his first heat since May when he was forced to withdraw from the Boost Mobile Margaret River Pro due to injury.

“I’m feeling really good and the knee feels awesome, and I’m just happy to be back in a jersey,” said Florence. “It’s such a prestigious event and I’ve been watching it since I’ve been growing up. It’s also really good just being here with some of the best surfers in the world and surfing against everyone.”

Billy’s showdown was put on hold for two days as the Michelob ULTRA Pure Gold Haleiwa Challenger event went into layday mode. By Monday, New Zealand time, it was all guns blazing again with Billy in Heat 12 in the Round of 64.

Heat 12 saw Billy up against Caio Ibelli, of Brazil, Cam Richards, of USA, and Carlos Munoz, of Costa Rica – they’re all incredible surfers in their own rights. But once again he showed his mettle with great wave selection and equaling the best wave score of the heat – a 6.57 to match heat winner and 7-season CT surfer, Caio Ibelli’s best. Billy took second dispatching Richards and Munoz (who was tarred with an interference) in the process.

“Today was another fun heat,” he offered afterward. “I’m just trying to get some good waves and surf the best I can.”

WSL will make the call at 7:30am HST November 30 (6:30am NZST December 1) with Billy in Heat 5 against Griffin Colapinto, Alex Ribeiro and Luke Swanson. If they call an 8am start then Billy is likely to surf around 9am NZST.

Billy was sitting in 59th place on the Challenger Series going into the event. The top 12 qualify for the 2022 Championship Tour. He’s likely to jump into the top 40 with his progress so far at Haleiwa, but needs to make the semi-finals or better to guarantee his spot. That’s not out of the question given the way he is surfing and he loves the big occasions.

“Only one thing to focus on now,” Billy said. “Nothing to lose … all to gain.”

The World Surf League Michelob ULTRA Pure Gold Haleiwa Challenger, the final stop of the 2021 Challenger Series, has been called off for the day today (Wednesday NZST). There was a drop in swell overnight. However, a promising outlook has event organisers expecting an exciting finish to competition in coming days.

“Today dropped off as it was expected to and we’re off for the day with what looks like some good swell on the way so we’ll be back tomorrow, Wednesday, with a 7:30am call,” said Hawaii/Tahiti Nui Tour Manager Marty Thomas. “We’re in a great place for competition with two days down and two full days remaining before we crown our event winners. As long as the winds don’t become an issue in the next few days we could be looking at wrapping things up in some solid conditions to put on a show for the local community and those watching around the world.”