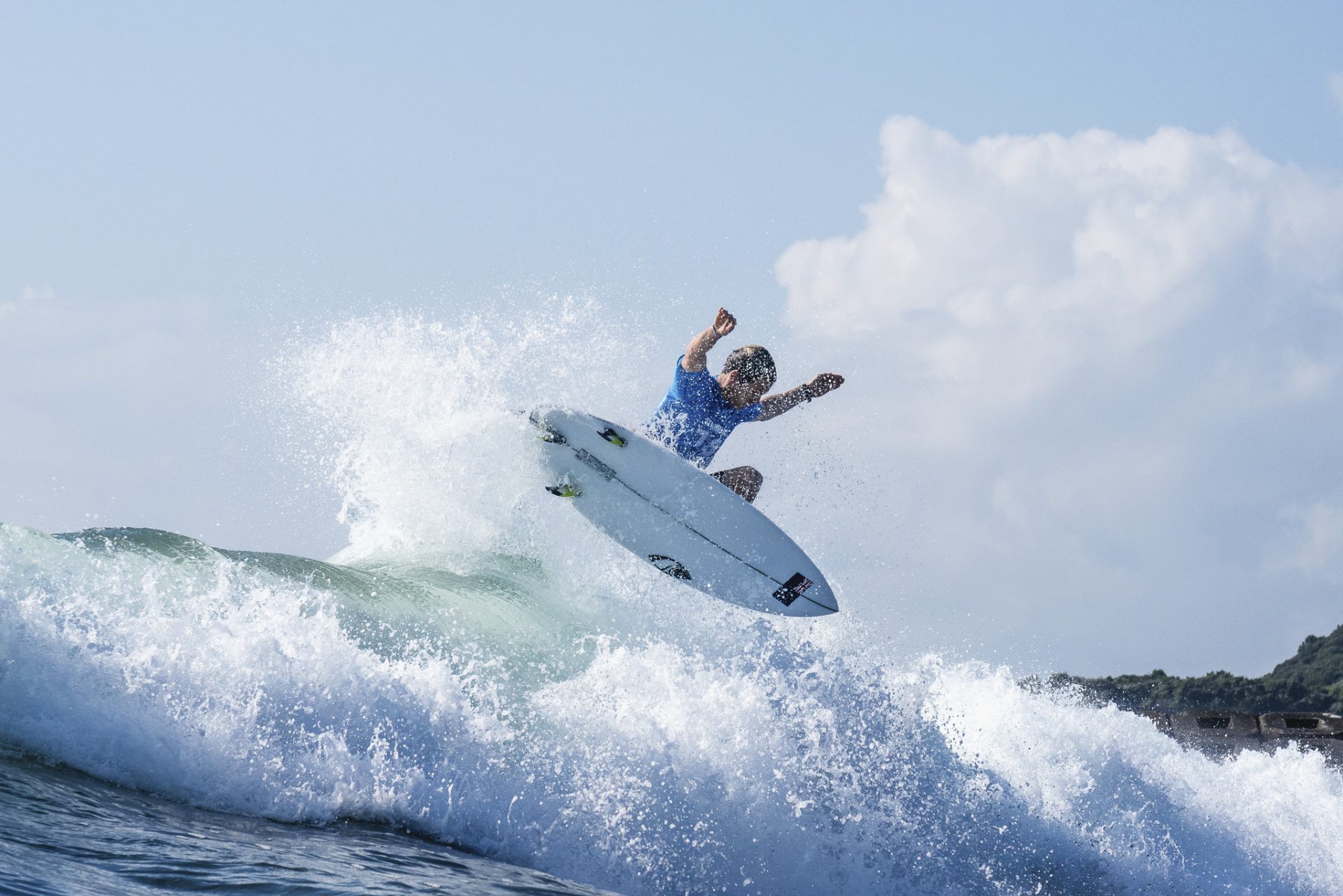 Both of New Zealand’s Olympic surfers, Billy Stairmand and Ella Williams, survived Day 1 of competition at Tsurigasaki Surfing Beach, Tokyo, today, advancing to the Round of 16.

Raglan’s Billy Stairmand was first up in a morning clash that saw him battling in average 1-2 foot waves at Tsurigasaki against WCT campaigners Japan’s Kanoa Igarashi, and Jeremy Flores, of France. Rounding out the heat was Peru’s Miguel Tudela.

Stairmand ripped out of the gates with a great wave – scoring a 5.0 ride that put him straight into the lead, which he held for much of the 30-minute heat, until Igarashi and then Tudela clawed him back. Igarashi did it with two 6-point rides and then Tudela found the faces he needed to send Stairmand to the repechage Round 2. It was 10.67 plays 9.97 between second and third. Igarashi did his country proud with a clear 12.77, while Flores struggled to find the high-value waves, finishing with a heat total of 7.63.

Stairmand’s result meant he would need to get his head together for the Round 2 elimination round, to be run after the women’s Round 1 later in the day.

“History was made today,” he said. “What an amazing experience being a part of it all. It honestly has been so incredible with all the love and support from everyone from home and around the globe. I appreciate and love ya all. I’m not only doing this for myself, but I want to represent all of us with the highest pride and honour.”

For Whangamata’s Ella Williams it was a baptism of fire with a heat against on form WCT surfer USA’s Caroline Marks, with Leilani McGonagle, of Costa Rica, and Portugal’s Yolanda Hopkins equally out to prove their Olympic worth.

Williams burst out of the gates with a 5.17 that would go into her final score. She exchanged places with McGonagle through the middle of the heat as 19-year-old Marks stamped her authority with a string of scores around the 6-point mark and established a clear lead and signaled that she’s hunting for a medal. Williams eventually found a 4.53 that would push her into second on 9.70, with McGonagle breathing down her neck with a 9.64 and Hopkins adding to the pressure with a 9.24 heat total.

Williams will now meet Costa Rica’s Brissa Hennessy in her Round 3 match up scheduled for 11:12am (NZST) tomorrow. A win will put her into the quarterfinals and one step closer to a medal.

The New Zealand team, which includes surf coach Matt Scorringe, threw its arms around Stairmand for his Round 2 do or die heat late in the afternoon in Tokyo. It worked. Stairmand opened his account with urgency and precision.

Up against USA’s John John Florence, Rio Waida, of Indonesia, Manuel Selman, of Chile, and Carlos Munoz, of Costa Rica (who did not start), Stairmand had to fight for his life.

He found a 5.10 and looked lethal in the improving conditions, surfing fast and fluidly, making the most of every turn. He notched up a 5.10 early on and just kept raising the bar to add a 5.47 and a 5.87. His 5.87 included one of the best airs of the heat, but seemed to divide the judges with a 1.2-point spread among the five officials.

Florence earned their favour with 6.67 and a 6.10 to take the win on 12.77. A late charge by Waida saw him overtake Stairmand by .19 of a point. Third place puts Stairmand into Round 3 but he’s clearly shown he has the drive to take the fight to the big names out there. His air game will certainly be called into play when he meets current World Champion, Brazil’s Italo Ferreira, at 5pm (NZST) tomorrow.

“No matter what happens … I promise you I will give it my everything with heart, honour and pride,” Stairmand offers.