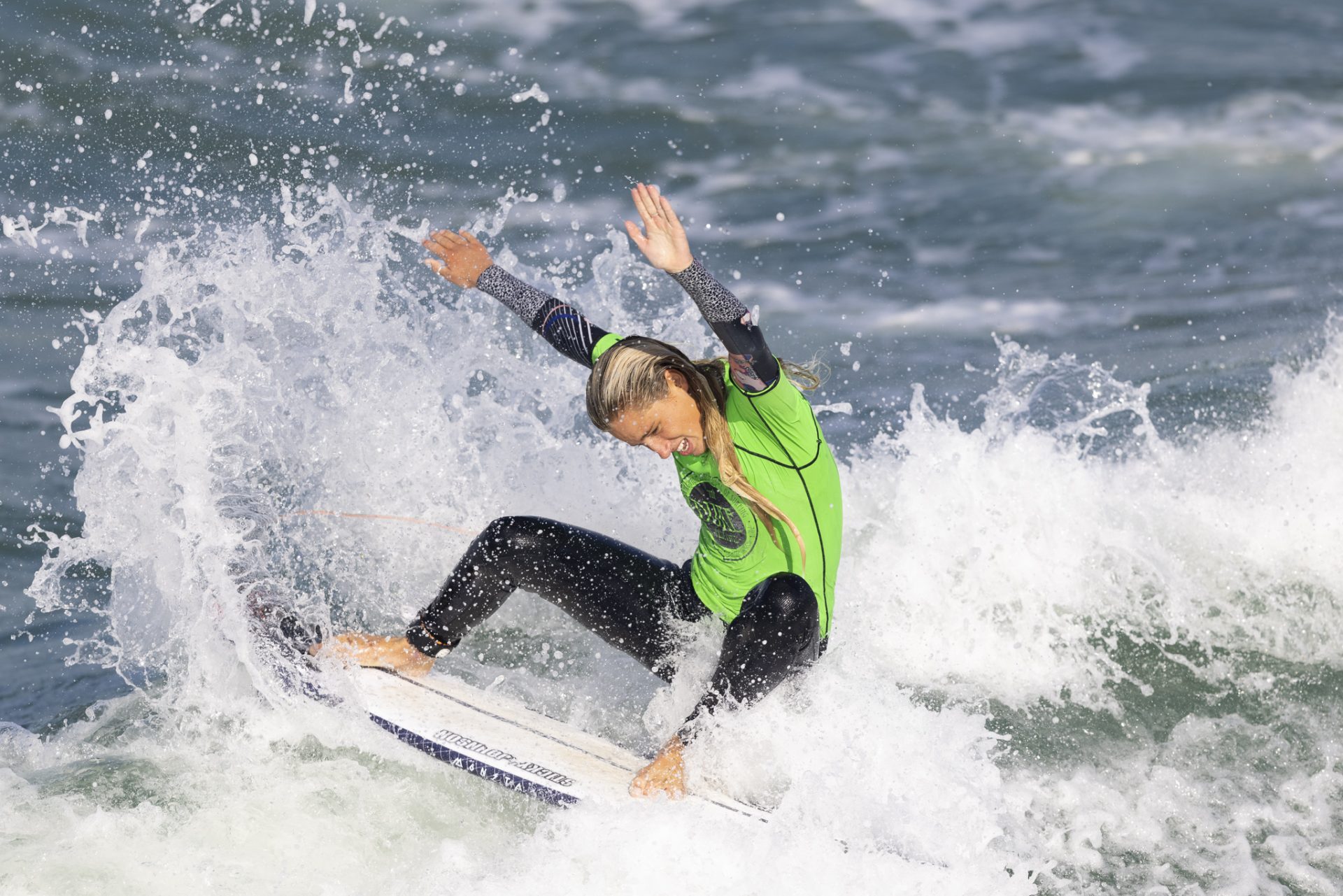 Zen Wallis, of Piha, and Ava Henderson, of Christchurch, were among fourteen champions crowned at the event. The event features a festival atmosphere to celebrate the culture of surfing in New Zealand and to highlight the moment in February 1915 that Duke Kahanamoku visited the area.

The swell built overnight for finals day with an unruly 1.0m – 1.5m swell and moderate northeast winds pummeling New Brighton Beach all day and making it a challenge for all participants.

“I have been pushing hard,” Wallis said of his performance. “I have had a couple of not so good results, so I am stoked to come away with this one.”

“Beforehand it was looking all over the place and I was thinking, ‘how am I going to make a plan for this?’  I am going to have to trust my instincts. But once I got out there the line-up opened and there were a few good waves.”

“I have been working on my longboarding, as I haven’t been getting into the ‘good’ scoring range, but I have talked to guys and worked hard to up my scores.”

Wallis ousted Nick Tuhikarama (Chch) who finished runner up ahead of Jack Tyro (Chch) in third and Will Jamieson (Chch) in fourth.

Ava Henderson won the family rivalry in the Women’s Longboard Division relegating her mother, Donna, to a runner-up finish. It was Henderson’s first foray into the longboard division and the stormy conditions played into her skill set as she surfed to a 7.33-point heat total ahead of her mother. Siohban Jayes (Chch) finished in third place after winning the Women’s Canterbury Championships a week earlier. Henderson’s step sister Estella Hungerford (Chch) finished in fourth.

“It was pretty funny – conditions were quite tough out in the final,” said Ava Henderson. “It was good to have a heat with mum. I wouldn’t have heard the end of it if I got beaten by Mum, so I am lucky to win this one.”

Henderson also claimed the Under 18 Girls Division, but ran into trouble in her Under 16s heat.

“I had a not that great final in the Under 16s, so I wanted to do my best in the Under 18s,” Henderson admitted. “I did my best to get the result and I got there in the end.”

Anneliese Coberger (Chch) came out on top in a close final for the Over 40 Women’s Longboard Division.  Coberger backed up a good result from the previous weekend at Sumner in the Canterbury Women’s Championships with today’s win. She finished ahead of Sarah Armstrong (Chch), Donna Henderson (Chch) and Katrina Millar (WGM) who finished second through fourth.

Ava Henderson made up for her miss in the Under 16 Division with a comfortable title in the Under 18s.  Henderson finished with an 11.33-point heat total for a couple of big turns to outpoint fellow Christchurch surfer Leah Wilson. Brock sisters Anna and Sophia, of Mount Maunganui, finished in third and fourth respectively.

Myka Black (Chch) went head-to-head with Jack Hinton (Mnt) in the Under 18 Boys Division and came out on top after an exciting exchange in the dying stages of the heat. Black finished with a 12.2-point heat total besting Hinton who jumps to third on the NZ Grom Series rankings. Tyler Perry (Kaik) finsihed third with Jake Owen (Dun) in fourth.

Tao Mouldey (Mnt) claimed his second of two titles in the Under 16 Boys Division. Two committed backhand hacks on one wave sealed the deal in the final with the wave scoring 8.0 for a 15.4 point heat total. Tyler Perry (Kaik) and Jack McKenzie (Chch) finished in second and third respectively with double finalist Taj Millar Dal Bosco (WGM) finishing in fourth.

Leia Millar, of Piha, claimed her second title of the day with a big win over Ava Henderson (Chch) in the Under 16 Girls Division. Millar found a couple of rare waves that peeled through to the inside allowing her several good turns versus the single turn waves of Henderson with a 13.2 v 10.03-point difference. Chloe Groube (Pau) finished in third place ahead of Anna Brock (Mnt) in fourth.

National Champions Tao Mouldey and Leia Millar out-surfed their opponents in the Under 14 Division, with both surfers winning with big margins. Mouldey posted a 14.2-point heat total and Millar finished with an 11.6-point heat total. Benji Lowen (Chch) finished runner-up to go with his second in the Under 12 Boys Division, while India Kennings (WGM) finished runner up in the girls division.

Kaikoura’s Sonny Lyons and Orewa’s Alani Morse claimed the Under 12 Divisions with participants showing exceptional courage to tackle the conditions, doing laps of the beach to combat the longshore drift.

The three-day Ray White Duke Festival of Surfing celebrates the sport under the name of legendary Hawaiian waterman and Olympic swimmer Duke Kahanamoku. Surfers from throughout New Zealand travel to New Brighton to take part. Many enter the event purely for the festivities and the great cause behind the festival which brings to life New Brighton. The festival includes a skate competition, art exhibition, Denis Quane Exhibition, outdoor movie nights bands and much more.

About the Duke Festival of Surfing

In 2015 Ross Tyson made an amazing replica of the Duke’s surfboard as part of the centenary celebrations of Duke Kahanamoku’s surfing and swimming displays in the area. Ross designed the support framework; the pattern for the board was kindly drawn out in full size by Mark Calcutt; Dave Poyner finished the board surface with a beautiful high-spec coating.

These celebrations spurned the inaugural “Duke Festival” the following year and the festival is now one of New Zealand’s largest surfing events. The Duke Festival is about more than just the sport of surfing; it’s about the culture of the beach and those who love the sand between their toes and salt in their hair.

The Duke Festival uses the sport and culture of surfing to raise pride in, and the perception of, the wider New Brighton area.