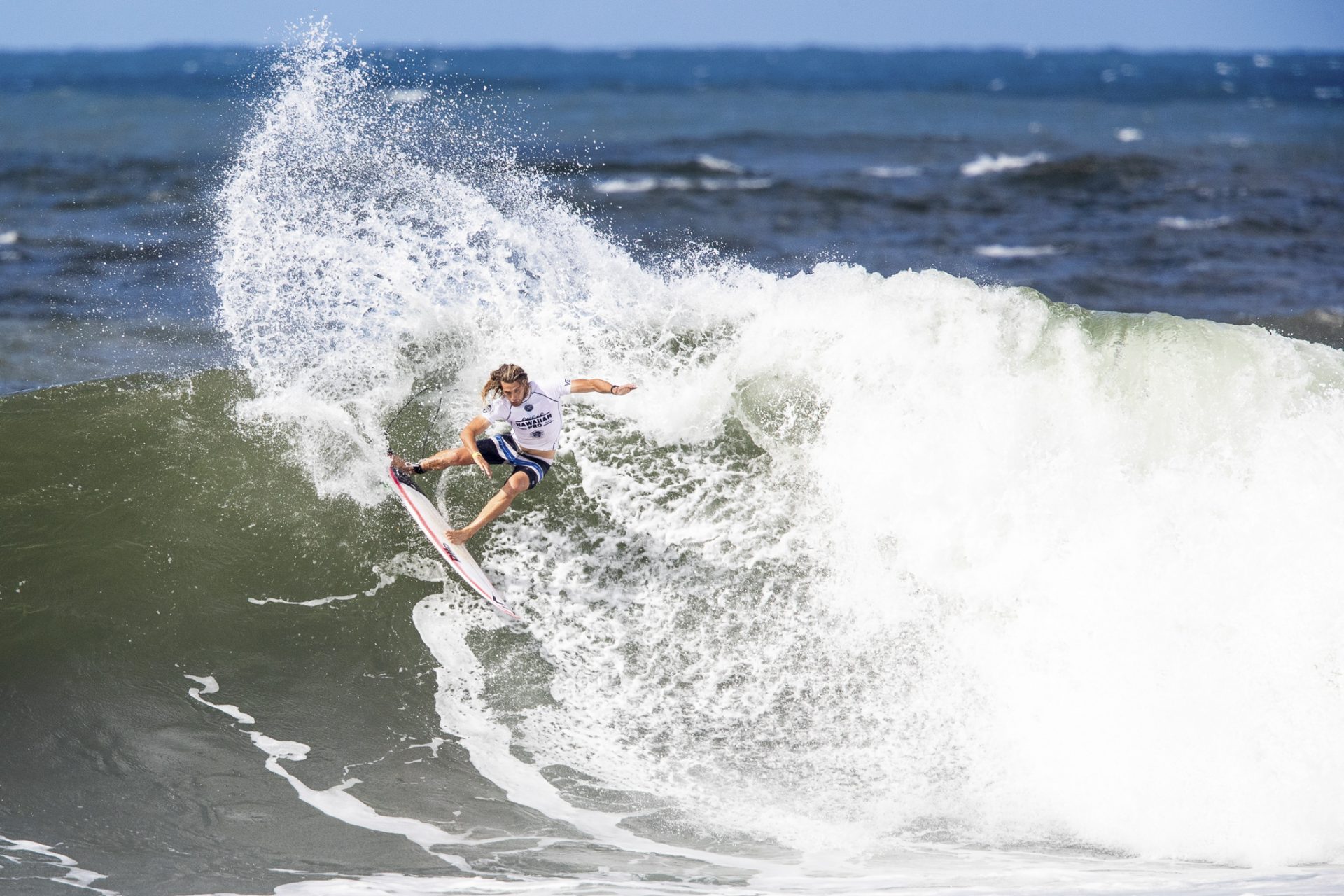 Ricardo Christie laid down a new chapter in New Zealand surfing history today when he went blow-for-blow with three of the world’s best in the final of the Hawaiian Pro at Haleiwa. His third place finish catapulted Ricardo from 14th to seventh on the WQS rankings and puts him in an incredible position for re-qualification for 2019.

Ricardo’s surfing was his typical powerful style in the Haleiwa lineup and emulated that of 2012 World Champion Joel Parkinson, of Australia, who went on to win the event. The Australian is now the front runner for the 36th Annual Vans Triple Crown of Surfing (VTCS) title. Seventeen-year-old rising star Mateus Herdy, of Brazil, earned runner up, with Deivid Silva, of Brazil, in fourth.

Parkinson won the VTCS three consecutive times in 2008, 2009 and 2010. The 2018 Hawaiian Pro marks Parko’s first win since 2013 and final competitive appearance at Haleiwa. He’s retiring at the end of the season.

The final of the Hawaiian Pro was an incredible clash of classic surfing versus progressive with the waves turning on for a rapid-fire exchange among all finalists. Spectators were treated to a variety of power carves, barrels and aerial maneuvers throughout the 35-minute heat at Haleiwa Ali’i Beach.

Each finalist earned a chance to shine as mother nature provided an onslaught of waves. By midway through the heat, it was anyone’s day. Ricardo’s best wave, an 8.40, was for a wrapping first turn into a tail slide followed by a quick barrel.

There is no secret that the more powerful waves of Hawaii suit 30-year-old Ricardo. He weighs in at 84kg and at 6’1″ he’s a powerhouse athlete. He’s always performed well on the rock – he even used Hawaii to springboard on to his maiden Championship Tour season back in 2015. But this time something is a little different. This time the Mahia local has a wealth of high-performance sport knowledge under his belt and three years of thinking about a 2015 season on tour that struggled to fire at times. That’s a pretty incredible motivation.

While he has rocketed from 14th to seventh place, Surfing New Zealand general manager, Ben Kennings warns that the WSL has not confirmed his place on the tour yet.

“A runner-up finish would have put it beyond doubt,” offers Ben. “In saying that, he has put himself in an excellent position to qualify and fingers crossed he can put it to bed by advancing out of a heat or two at Sunset so that we don’t have to wait until 20th December when the Pipe waiting period finishes.”

“You always watch one or two heat progressions from any of the Kiwi athletes and you start crunching numbers, checking back on the rankings, looking at the points differentials and getting your hopes up,” he smiles. “From the quarters onwards I was totally engrossed. Watching the final I thought one small act at the end of the 35 minutes was telling. Ricardo prevented fourth-placed Deivid Silva from catching the final wave. That to me showed how dialed into the overall qualification picture Ricardo was. The difference in ranking points between third and fourth is 400 points and you never know what that might mean qualification-wise or even seeding-wise in 2019.”

Surfing New Zealand president Chris Fougere has charged himself with empowering New Zealand’s surf athletes and was “immensely proud of Ric’s run at Haleiwa”. As were most Kiwis tuning into the events as they unfolded.

Ben said this moment was huge for Ricardo, but also had wide-ranging benefits for all surf athletes in New Zealand.

“For Ric, it potentially means another year on tour among the best in the world and a chance to perform and stay on tour,” he offers. “Olympic qualification options are greater and results like this make it easier for Ric to get support from the likes of High Performance Sport New Zealand. All of this puts New Zealand on the map globally and increases the profile of surfing in New Zealand. Coupled with Paige qualifying for the Women’s Tour, it could be an unprecedented year.”

Ricardo seems hungrier and more clinical than ever right now and Ben puts that down to his experience.

“You could assume that expectation is less now for Ric – that may have previously weighed on his shoulders. I listened to Ricardo pre-heat when he was a 15-year-old at the World Juniors and he was very similar in approach to now; wanting to go with the flow and freestyle it, let his surfing do the talking. With experience on his side and less expectation, perhaps he fits into that strategy better now?”

The maths are hazy, but there are two surfers, Kanoa Igarashi, of Japan, and Griffin Colapinto, of USA, who are inside the top 22 of the Championship Tour and are likely to remain if they perform well at Pipeline, who are also in the top 10 of the QS. If all goes well they won’t need their QS insurance and that will bump Ricardo up to fifth. But it will come down to Sunset and Pipeline before RocketLab in Mahia can send a rocket skyward with Ricardo’s name on it.

“His surfing went up a whole cog over the 2018 summer,” offers Chris. “Had he not met a flying Ryan Callinan in the quarters in Portugal who knows what might have happened there? This finals placing, up against most of the best in the world, will give him a lot of confidence going into Sunset. I hope he can progress deep into the event and even win it to showcase to the world the serious power and rail game he possesses.”

If Sunset can produce the waves it is renowned for then Ricardo will be the surfer to watch.

“Sunset can crush the best of surfers and I don’t know what the forecast is for waves, but with Ricardo’s form and rhythm with the ocean, it would be amazing to see another good result so that he can improve his ranking further and get a better seed in 2019,” shares Ben. “Heck, let’s go all out and say he is leading the Triple Crown after Sunset and gets a wildcard for Pipe!”

Now, that would be incredible to see. And not such a leap right now.

“Ricardo’s re-qualification would come at a pivotal moment for competitive surfing in Aotearoa,” adds Chris. “To have two Kiwis on the big stage at once will reopen the doors for the junior talent that is building in New Zealand and it will give them the confidence and self-belief to follow Paige and Ricardo.”