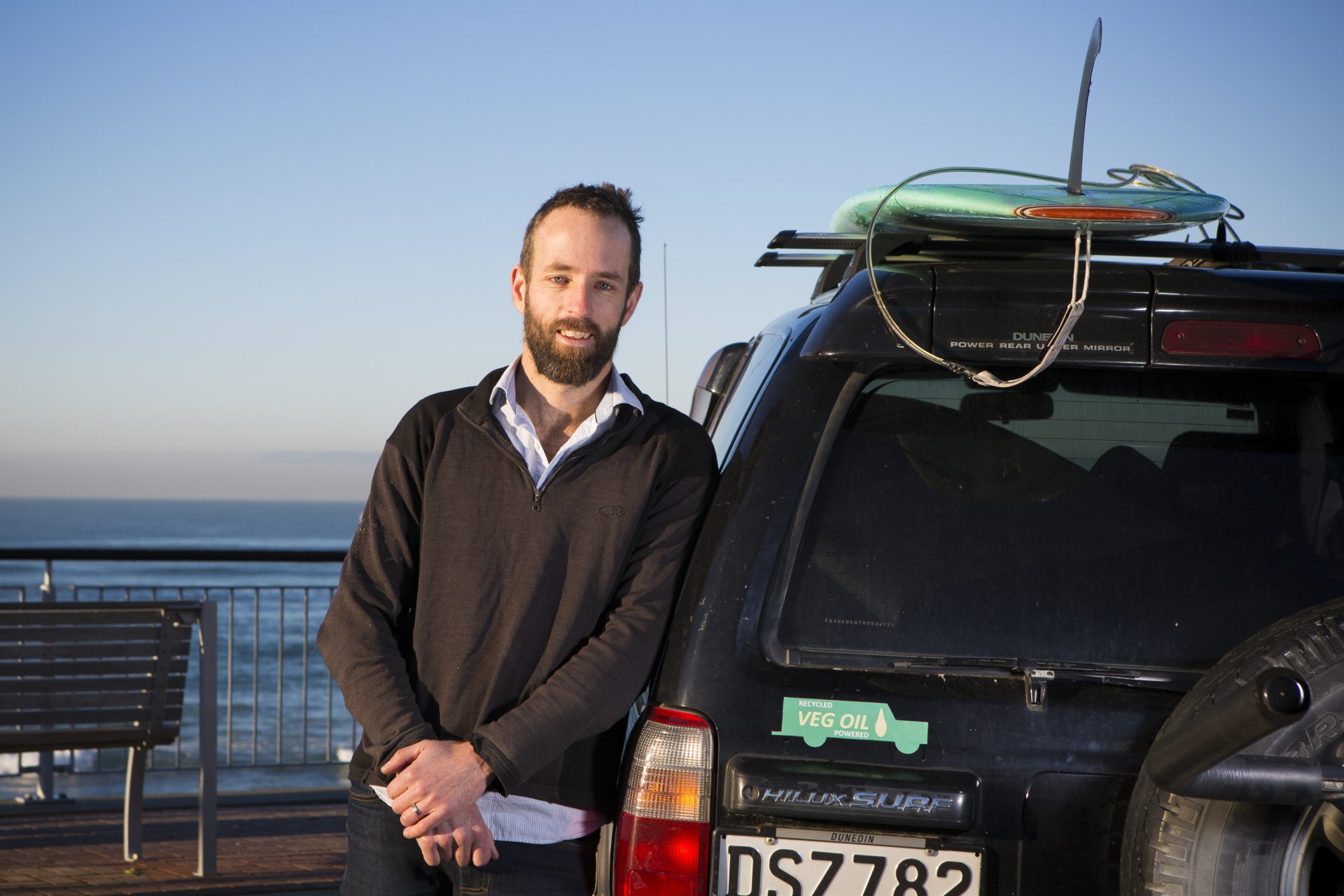 It’s 10:30am on a Tuesday and Matt Jenks is pulling up outside Japanese restaurant Jitsu in lower Stuart Street, Dunedin, parking his bike and heading inside with a 20-litre container to drain the kitchen of its used vegetable oil. It’s a 10-minute side-trip on his way to work at Dunedin Hospital. Matt, 39, is an anaesthetist. And a dedicated surfer.

“I’ve always had a bit of an environmental conscience and I’ve been particularly concerned about climate change,” he admits.

Matt is a member of an organisation called Ora Taiao – The New Zealand Climate and Health Council. It’s an organisation that has a lobbying role to try to encourage the government to reduce greenhouse gas emissions.

“The World Health Organisation has stated that in the 21st century climate change is the greatest threat to global health. So I’m interested on that level – helping to encourage the country to reduce its greenhouse gas emissions, but also on a personal level I wondered what I could do to reduce my own greenhouse gas emissions. I had a Toyota Hilux truck that a lot of my colleagues at work looked at. They called me a hypocrite for driving around in this diesel-belching truck to go surfing all the time. So I thought about what I could do to reduce my own personal impact on climate change. I started investigating converting the truck to run on vegetable oil.”

The World Health Organisation has stated that in the 21st century climate change is the greatest threat to global health.

Matt’s surf wagon of choice is a 1998 Toyota Hilux Surf. These older vehicles, with indirect injected diesel engines, were perfect for conversion, he explained.

“I had it in the back of my mind that diesel vehicles could run on vegetable oil,” shares Matt. “I started asking around to see who else in town had done it. I came across a couple of people and found Steve Lind and Mike Trewern, who runs Fish Hook restaurants. He’d converted his vehicle to run on oil from his fish and chip shop.”

Matt said he spent $2500 on the conversion in total and admitted that in retrospect he, with the help of Steve, would have done a few things differently.

“But I estimate that because I get the vege oil free – it’s a waste product from the restaurant I get it from – and with the amount of driving I do going surfing it will probably pay itself off in three years.”

And running a car on vege oil is not too different to running one on diesel.

“It doesn’t miss a beat – it runs smoothly and has exactly the same amount of power. The only noticeable difference when you’re running on vegetable oil is the smell if you’re driving behind me and in the vehicle – it smells a bit like a fish and chip shop – just a hint,” he laughs.

“Otherwise it’s the same economy – same mileage and power. I do start the vehicle on diesel in the mornings when it’s cold, so it has a small diesel tank. As soon as the engine is warm the vege oil warms up and it gets less viscous and I flick a switch to run off the main tank. It usually takes about 1km of driving to warm the oil up.”

He said that first outing after he had the conversion done was a surreal one.

“The first time I was in the vehicle and had to flick the switch I was extremely nervous. But I flicked the switch and nothing happened, it just kept on driving … the fuel gauge started to go down after a couple of 100km, so I knew for sure it was using the vegetable oil. It still seems surreal now when I flick the switch,” he smiles.

“Now when I go surfing with my mates on the North Coast I usually volunteer to take the vegetable oil truck, because it’s free and a group of us can go together and have a low carbon footprint surf. We can take four guys in the vehicle with all the boards and it doesn’t miss a beat going over the Kilmog. The only thing I have to remember is to switch the fuel over about a km from where I stop so the fuel line is primed for next time. One of these days in the excitement of going out at Murderers I’ll forget to do that and be stuck there three hours later with cold vege oil in the line.”

Now when I go surfing with my mates on the North Coast I usually volunteer to take the vegetable oil truck, because it’s free and a group of us can go together and have a low carbon footprint surf.

Matt, who has three children and lives in St Clair, said he had to refine the vege oil through a coarse filter to “get rid of any onion or chips or tempura batter”, then he let it settle for two weeks, before pouring it through a sock filter. From there it was ready to go into his tank.

While Matt said it would be interesting to measure the carbon footprint of surfing, he didn’t think every surfer needed to convert their trucks to vege oil.

“At a simple level you can surf locally where possible,” he explains. “You can bike to the surf, like I do sometimes and if you want to surf a bit further afield you can hook up with friends and share vehicles – it’s a lot more fun cruising with your mates anyway.”

“When I have saved up enough money I think our next vehicle will be an electric or a hybrid vehicle – it will be a lot easier than processing vegetable oil,” he laughs.

But for now, he’ll be ferrying his children around town in “the vege truck” as they call it, and converting the restaurant’s waste oil into surf memories up and down the coast with a bunch of mates.