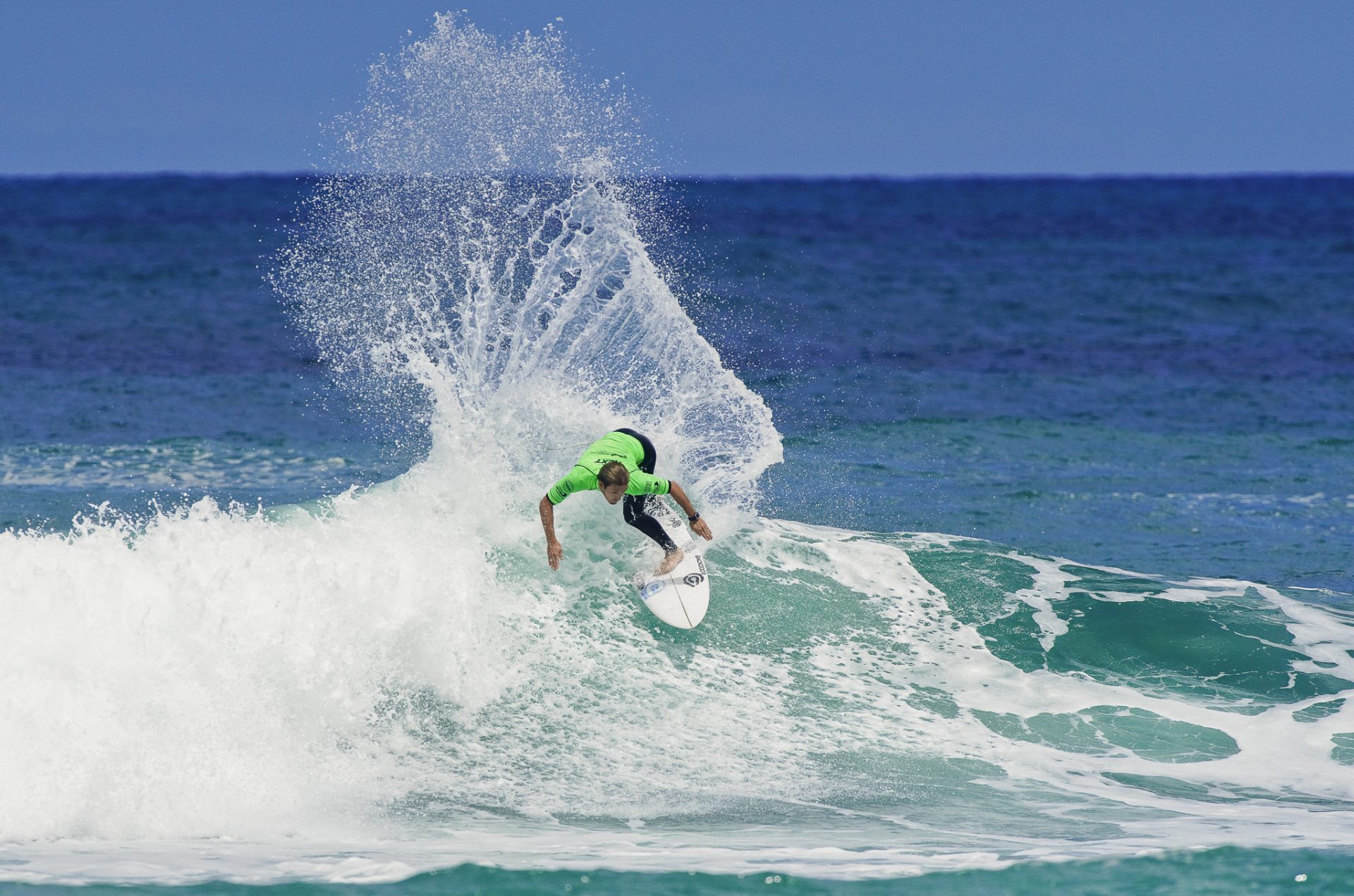 Eight surfers have secured the semifinalist spots in the men’s open division after an explosive quarterfinal round of action at the 2021 National Surfing Championships, which are being held at Piha this week.

The exceptional results from Tuesday’s round of competition were punctuated by stellar performances from Mount Maunganui’s Kehu Butler and Raglan’s Billy Stairmand.

The 2021 National Championships presented by The Trusts Community Foundation are being held at Piha Beach, Auckland from January 10-16. On Tuesday participants enjoyed the cleanest conditions of the event so far with light winds and a clean 1–1.5m swell and afternoon sea breezes.

Butler set the tone early with his 14.35 point heat total after blitzing the righthanders on offer in the middle of the beach.

“Waves are really fun with that tide going out, left and right options, so it has been fun today,” offered Butler who is usually overseas at this time of the year.

“It is real different being here at this time of the year, but it is good to be back. I am stoked to have fun waves, warm water and heaps of people on the beach to check out the action, it’s a cool event and I am stoked to be back in it,” added Butler.

The Open Men’s Division will not surf again until finals day on Saturday with Butler looking to catch up with friends and make the most of the good conditions over the next three days before he competes again. Advancing alongside Butler was Connor McLennan (Chch) who has quietly progressed through the field to the final day.

Number-one seed Billy Stairmand put aside his performance from day two to nail the highest heat score of the round (16.5 points) and highest single wave score of the event – a 9.0-point ride. Stairmand advanced alongside local surfer Dune Kennings who showed his knowledge of the break to lock in a semifinals berth.

At two different ends of the spectrum among the top eight are Tairua’s Sean Peggs and Raglan’s Jayden Willoughby who both won their heats to advance today. Peggs has been absent from competition for several years, but his reasons for attending were two-fold.

“I am over 30 now so I get a couple of divisions,” Peggs cheekily exclaimed about being eligible for the senior divisions. “More to the point, I am actually here because I have been coaching some of the young Tairua groms recently and pretty much wanted to come here and show them how to surf a heat so hopefully I have done that. Today’s performance is the first step done, I am super stoked to make it to the finals day. I just want to keep the young guys honest from here on in, I want to make them earn this national title. I want to post some more good scores on Saturday myself and see what happens.”

Jayden Willoughby is nearly half Peggs’ age at 16, but that didn’t stop him from dominating his match up from start to finish with a 13.75 point heat total.

“I got heaps of confidence from that wave I got straight away, it was in the first minute and it got me into a good rhythm,” admitted Willoughby, adding, “it will be cool to surf against all of the older guys on the finals day and see how I go.”

Willoughby will face off against Peggs as well as Taylor Hutchison (Rag) and Daniel Farr (Tara) who also advanced through their heats today.

The elder statesmen of the New Zealand surfing community got their campaigns underway across several divisions. Perennial title threat John Gisby (Gis), the record holder for the most titles in New Zealand at 38 and counting, made light work of his Over 60 Men’s heat to advance to the final. Dunedin’s Simon Brennan, Rick Lasch (Ham) and Morgan Cronin (Tai) all made great starts in the Over 50 Men’s Division advancing to the semifinals. Patrick Braithwaite (Gis), Chris Malone (Rag) and Jarred Hancox (Tara) all pushed through their heats in the Over 40 Men’s Division.

Day Four will see the introduction of more senior men’s divisions as well as the Longboard and Under 14 Boys. Day Five will see the SUPs and Bodyboard divisions added, with the Kneeboards joining the fray on Day Six. Finals Day will be held on Saturday for most divisions.

The National Surfing Championships mark the first of several domestic events this season which will conclude with a finale for the top 16 males and top 8 females across the Open Men and Women’s Divisions.

2021 marks the thirteenth time the National Championships has been held at Piha. The consistent waves of Auckland’s West Coast make the venue a good location for the seven-day event.

The longest running surfing event in New Zealand, the National Surfing Championships have a 57-year history and encompass 29 divisions spread across all disciplines and age groups making for an inclusive event, filled with high level surfing as well as good times in and out of the water. Over 320 entries have been received for the event.