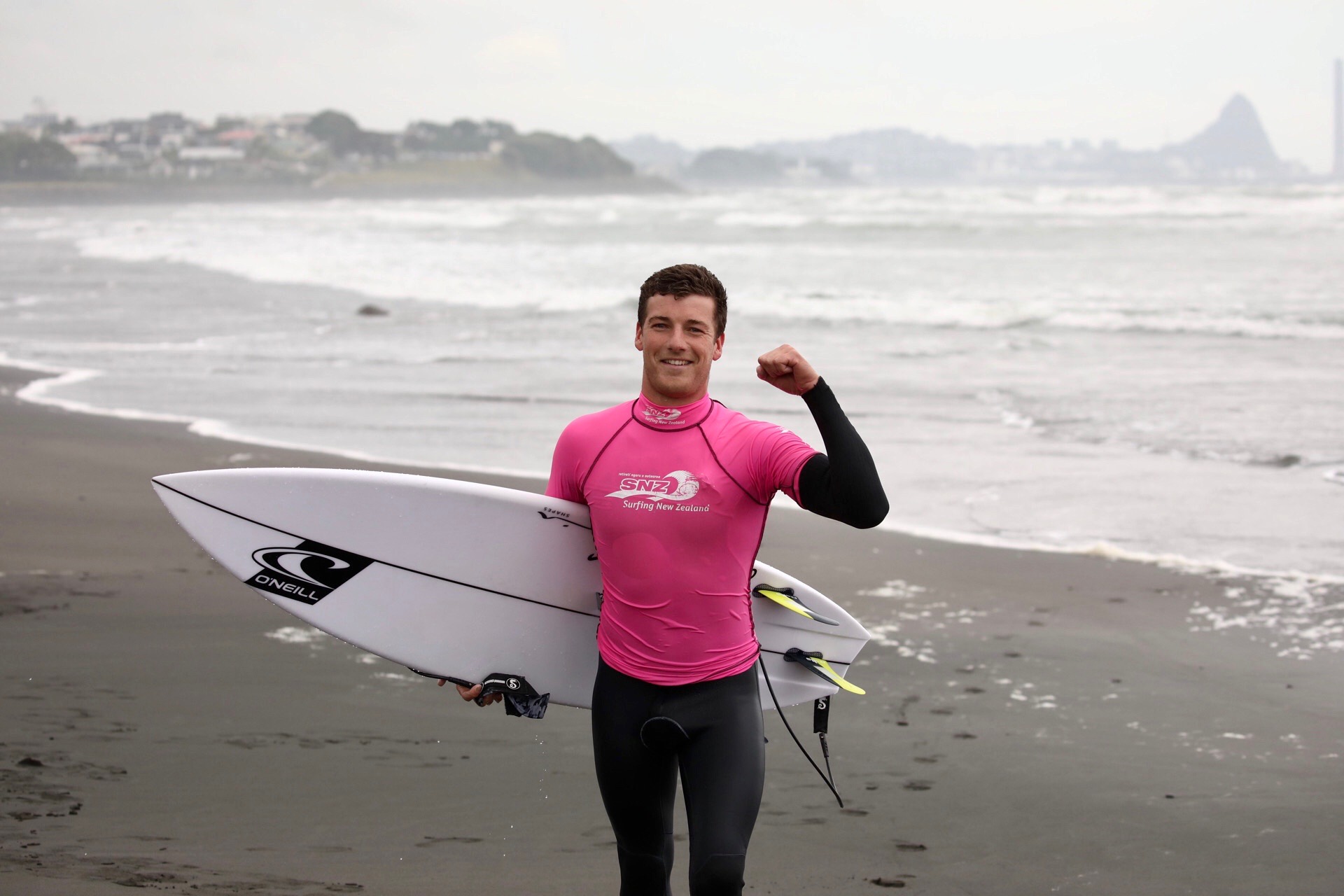 The event was relocated to Fitzroy Beach with the pending weather for the day looking ominous. However, the surf ranged between 1.0m – 1.5m and despite the moderate onshore winds from the northwest, the waves were highly contestable.

Moretti, of Northland, surfed to a 15.5-point heat total in the final to win his first national event since he was 12 years old. His final was highlighted by a quick start and near perfect 8.83 point ride in the opening minutes.

“I am so stoked to keep the momentum going through the whole comp,” Moretti admitted afterward. “Normally I choke up in the final a little bit, but I got a couple of waves and I am stoked to take the win over everyone else  – they were all ripping as well.”

“I would like to say it was all me and good strategy but the start of the heat was the best part, I got that one good wave right away and that set up the rest of it. It gave me the confidence for the rest of the final,” continued Moretti.

“I would like to say it was all me and good strategy but the start of the heat was the best part, I got that one good wave right away and that set up the rest of it. It gave me the confidence for the rest of the final.”

Runner-up surfer Billy Stairmand, of Raglan, fought back from a big deficit in the final to finish with a 13.3-point heat total, but the outgoing tide impacted conditions as the final went on.

Stairmand, by way of his second-place finish, did enough to leap to the top of the NZ Surf Series standings for the year. This is now his third straight NZ Surf Series title.

In the Open Women’s Division Elin Tawharu found herself in a precarious position in the final with no more than two minutes on the clock and a 2.0 point heat total. However, the young Mount Maunganui surfer flipped the script with a 7.33 point ride that jumped her from fourth to first leaving her opponents no time to react as she walked away with the event win, the first NZ Surf Series win of her career.

“Up until that last wave I was thinking I was losing and having a shocker,” she smiled after the final. “I was struggling to find the right wave or any type of flow. So, I was stoked to get that final wave.”

“The swell had dropped a lot compared to yesterday at Stent.  I targeted those rights that were coming through and I finally got one in the end.”

“Up until that last wave I was thinking I was losing and having a shocker. I was struggling to find the right wave or any type of flow. So, I was stoked to get that final wave.”

Tawharu’s win pushed Aimee Brown, of Great Barrier, back into second and with that, she finished second overall on the New Zealand Surf Series rankings behind Raiha Ensor, of Mount Maunganui.

Whangarei surfer Tom Robinson won the Under 18 Boys Division edging past local surfer Tom Butland in the final 11.90 to 11.60. Robinson had to come from behind in the final with his last two waves his best late in the heat and enough to surpass Butland. While Butland started out hot, he came up just short on his second scoring ride.

Raglan’s Jayden Willoughby finished third in the final ahead of Jack Hinton, of Mount Maunganui, in fourth. All four surfers in the final were competing up a division from their preferred Under 16 Boys category.

Gabrielle Paul, of Piha, stormed to her first win of the season in the Under 18 Girls Division. The young Piha surfer, contesting the final junior event of her career, surfed to a 13.17-point heat total in the final. Paul featured in the final of every event she contested in 2019, finally coming away with a win.

Placing second was Brie Bennett, of Raglan, who rode to the highest single-wave score of 7.23 points, but came up short on a backup wave catching one just seconds after the final finished.

Mount Maunganui surfer Georgia Wederell finished in third place, which was enough for her to hold on to the number one overall ranking in the Under 18s over Paul who jumped up to second.

The Backdoor Pro presented by Billabong is the seventh and final event of the 2019 New Zealand Surf Series which caters for New Zealand’s top male and female surfers.  The series started in Taranaki in January and has seen events held at Mount Maunganui, Raglan, Dunedin and Canterbury.