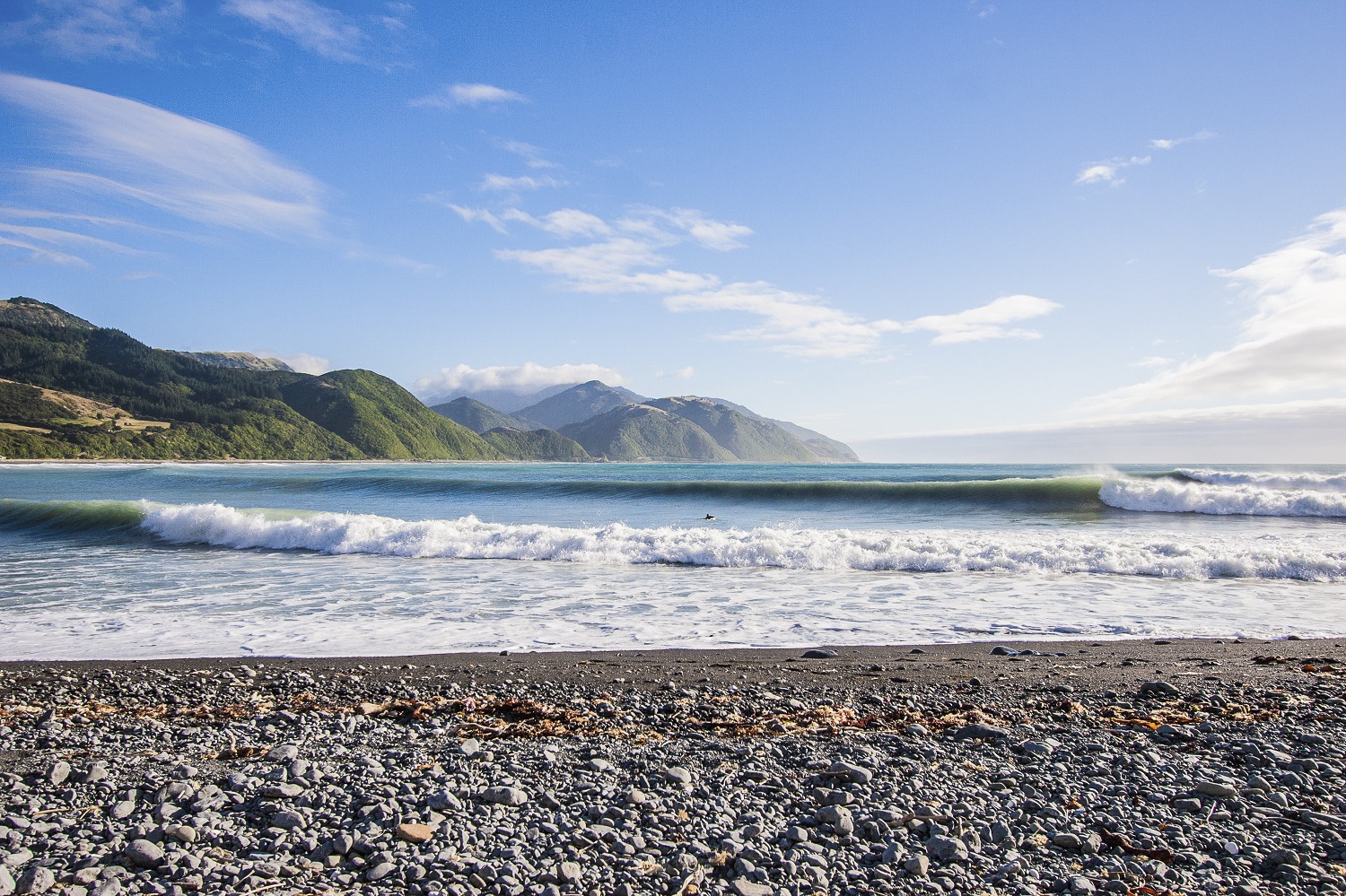 The iconic Mangamaunu Bay earns reprieve from NZ Transport Agency’s shared use cycle path plans following the Surfbreak Protection Society’s judicial review mediation. It’s a win for all surfers in New Zealand and testament to the power of the people when working together for a cause. UPDATED: November 27, 2018

In a press release issued today, the NZ Transport Agency (NZTA) said it had received some preliminary results from the coastal modelling of its proposed shared use path at Mangamaunu Bay, north of Kaikōura. The shared use path was part of the broader safety and resilience package proposed for the area of SH1 along the Kaikōura coast, south of Clarence, following the significant damage sustained during the earthquake in November 2016.

“While the modelling is not yet complete, it shows that there may be a minor effect on the wave pattern at Mangamaunu in terms of waves reflecting off coastal structures,” says Jim Harland, Director Regional Relationships, for the NZTA.

“As a result of this modelling, and given this surf break is considered of national significance, the Transport Agency will not progress the shared use path at Mangamaunu Point under the current consents,” offers Harland.

“That solves some of the problem for now,” offers SPS project lead Annie Bermingham. “But not all of it. It is a good outcome as it will send the development through the RMA – and the right channels.”

Bermingham added that SPS experts quantified the affects on the surf break as more than minor and while the parties did not agree on the scale of the affects, both agreed that it was unacceptable for a nationally significant surf break.

In coming to an agreement, the Surfbreak Protection Society had agreed to withdraw its judicial review, Harland said.

“We came to an agreement with the parties,” added Bermingham. “It was a very tough decision and the SPS committee was divided 5-4 around continuing to the high court or settling.”

The society challenged the consents granted under emergency powers in the Order in Council by Environment Canterbury and the Kaikōura District Council for the shared use path at Mangamaunu Point, requesting instead that any structures or shared use paths in this area should go through normal Resource Management Act processes.

Some essential safety and resilience work to be carried out by the North Canterbury Transport Recovery Infrastructure (NCTIR) team at Mangamaunu Bay will still go ahead. These include:

· Closing off the existing parking area on Mangamaunu Point, which is deemed unsafe.
· Improving the Kiwa Road intersection and rail crossing.
· Developing “Fisherman’s carpark” at the bay’s north end to create a safe stopping/parking area.

The work proposed from “Fisherman’s carpark” south around Mangamaunu Point would need to be considered at a later date under the normal Resource Management Act and business case processes, added Harland.

“SPS does not support the closing of the surfers’ carpark,” asserts Bermingham. “This has been relayed right throughout the process.”

“The Transport Agency is committed to working with the community and with iwi to ensure the outcome of the November 2016 earthquake can be a positive legacy for the wider community,” Harland offers. “More engagement with iwi and the communities to the north and south of Kaikōura will be needed in coming months as several work packages for safe stopping areas are refined with local knowledge and input from people who use these areas and value them, helping to ensure any changes made will be for everyone’s benefit.”

“We’ve come to an agreement with these parties, but is there more work to do?” asks Bermingham. “Absolutely. Our next steps are around supporting the full involvement of the iwi and community around all discussions involved in the next steps of the process.”

Bermingham said the outpouring of support for the Save Mangamaunu campaign had been heartening.

“We’ve had an incredible amount of support locally, nationally and internationally from people whom love Mangamaunu and feel a connection to this place. On behalf of all the SPS team, we are very grateful for that.”

Read our background story on the Save Mangamaunu Campaign here.