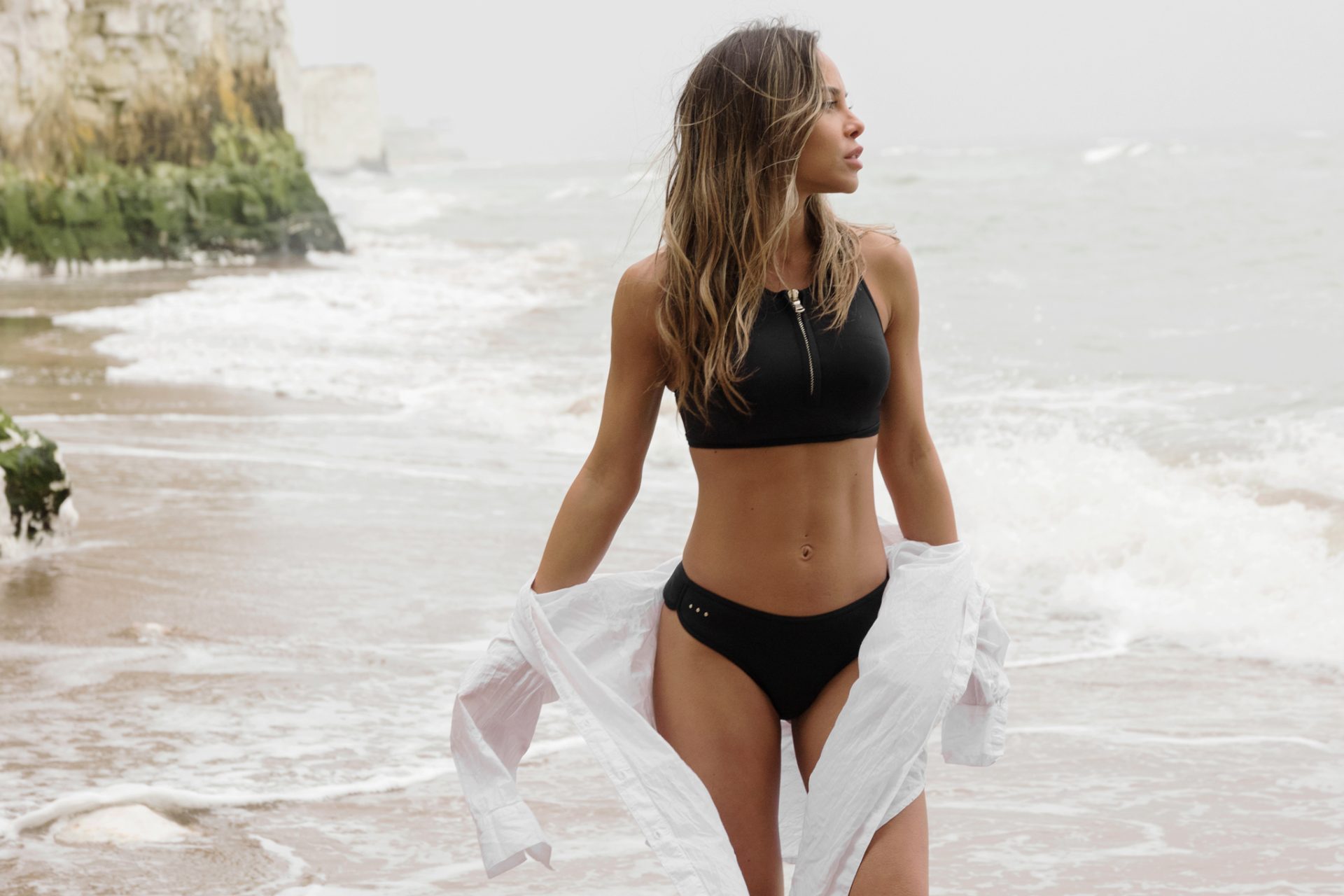 They say this is the era of the fierce female. If that’s true then Janaya Wilkins, with her new sustainable oceanwear range, nails it. Born in New Zealand, designed in London and made in Italy, SLO active has a global purpose: to clean up and protect our oceans.

Wilkins grew up in Eastbourne, in Wellington. Her Dad was the president of the local surf club and she spent a lot of time in the Wairarapa with a special connection for the arcing lines of Castlepoint. She now lives in London, but finds her way back to New Zealand each summer.

She’s the founder of SLO active and named her signature range Clean Lines.

“It’s a limited collection of activewear for the ocean,” Wilkins offers. “An all-black collection with athletic cuts that celebrate the female form in all its shapes, and in all the right places.”

“Our mission is to clean up and protect the ocean through grassroots activism, selling sustainable luxury oceanwear and sharing profits with our ocean partners,” she shares. “For every piece bought, SLO active will donate to one of their ocean charity partners of the consumer’s choice.”

Wilkins developed a strong connection with the ocean from a young age and a deep concern for its conservation and future. With a passion for ocean sports she has experienced first-hand the marine-pollution crisis that impacts wildlife and ecosystems.

“Our mission is to clean up and protect the ocean through grassroots activism, selling sustainable luxury oceanwear and sharing profits with our ocean partners.”

“The ocean is the lifeblood of this world,” she offers. “Ecosystems both underwater and on the land rely on the ocean – 70 percent of the Earth’s oxygen is produced by the ocean. Without it, we simply would not exist. Over 20 million tonnes of plastic ends up in our oceans every year and it’s estimated that there are over 5.25 trillion plastic particles currently floating around in the world’s oceans.”

Inspired by the slow movement, SLO active is a strong advocate for slow fashion, which encompasses all things ethical and eco-conscious in one unified movement. Made in a carefully selected family run factory in Italy, SLO active’s products are made from plant-based neoprene alternative, FSC-certified Yulex Pure.

Being an ocean lover and being based in London was no easy feat, but Wilkins said she was able to work from anywhere in the world.

“I have been fortunate enough to see a lot of the world over the past 12 years,” she admits. “It has given me the perspective to see how New Zealanders are so connected to the land and fiercely want to protect their environment. So, I guess I miss being in this culture.”

She said one of the main things she missed about New Zealand was the land and sea.

“The active outdoors life back home is something I think I took for granted growing up,” she smiles. “My favourite thing about being home is waking up and going for a run through the hills and the native bush, followed by a swim in the sea. This is me in my natural habitat.”

“My favourite thing about being home is waking up and going for a run through the hills and the native bush, followed by a swim in the sea. This is me in my natural habitat.”

She said SLO active was about a community of active women – both in the ocean and for the ocean.

“When looking to buy something, ask the question: ‘where does this come from? And where will it go at the end of my time using it?’ I believe that it’s our responsibility, as consumers, to ask those questions,” adds Wilkins.

“Conscious consumerism is not just about going to a local boutique and buying something handmade by a local artisan. It’s more than that. Every different point of the product life-cycle should be considered within slow fashion.”

SLO active isn’t just jumping on a trending marketing hook. The company has its money where its mouth is recently co-authouring a guide to reducing plastic in the oceans with ocean preservation charity Plastic Oceans. You can get a copy of this guide, called “Debunking the common myths surrounding plastic pollution” right here on their website.

The SLO active Clean Lines collection will be available on pre-order from May 2019.

Do you know a surf business going the extra mile for our oceans and environment? We’d love to help tell their story. Get in touch.