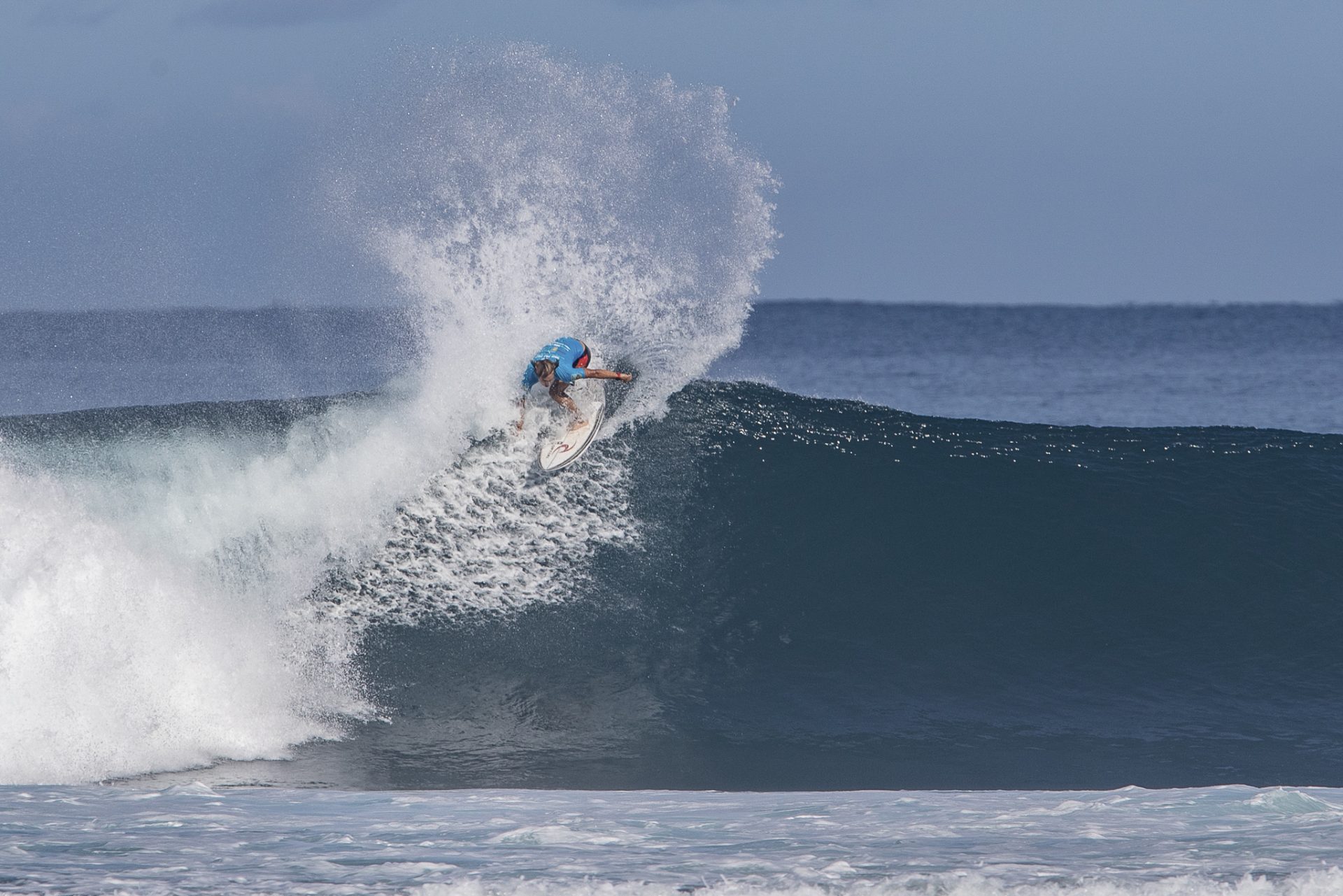 Elliott Paerata-Reid and Billy Stairmand have launched into the top 100 in the World Qualifying Series after their performances at the Krui Pro held at Tanjung Setia Beach, Lampung, Sumatra.

Stairmand was the form surfer of the event dominating through his early heats on his journey to the finals. The waves on offer, in the 6-8 foot range, were as perfect as you could get and laid the canvas for a truly high-performance QS3000 contest. Stairmand was soon joined in the quarterfinals by Paerata-Reid, who also rose to the top in the excellent conditions.

Paerata-Reid laid down a blistering quarterfinal, defeating Spanish surfer Ruben Vitoria who found himself in a combo position chasing 15.23 points and only finding 9.57. Paerata-Reid then met with Lucas Silveira in his semi-final, but was unable to reproduce the magic of this quarterfinal. Silveira managed to add a 9.5 to his score to better Paerata-Reid’s 14.73 with a 16.67. Silveira went on to win the 2019 Krui Pro.

Stairmand was in red-hot form all week at the Krui Pro. He managed to catch the best waves in every heat and absolutely tear them to shreds. His polished backhand attack has been refined at Raglan, his home break, and it paid dividends in Sumatra this week as he booked his spot in the quarterfinals.

“I’ve been lucky with getting the good ones in all of my heats,” Stairmand said. “It feels amazing out there. The wave has a similar shape and pace to the waves at home at Raglan and that’s helped me. I have just wanted to go and surf my best and winning heats in good waves is the best feeling.”

“Making the quarters was amazing!” he adds. “I felt like I was gonna do really well in this event. I was feeling the most comfortable I have all year and the waves were pumping. So, it was good to get some heats wins and some good surfing done.”

Stairmand’s quarterfinal run didn’t go to plan with Cole Houshmand ending his hopes for a berth in the finals.

“I was sure I was gonna make the final,” Stairmand admitted to NZ Surf Journal afterward. “I guess I go into every event wanting to make it to the end of the competition. I was really gutted I lost in the semis. I felt I was gonna go all the way. But it wasn’t the case. I’m still happy with a fifth.”

He said being able to surf well in the quality waves on offer at Krui gave him a huge boost in confidence.

“It’s a huge confidence booster for me,” he explains. “And getting to show the world what we can do in some good waves is even better. It was an amazing week in Krui – I will be going back for sure. This year has been a lot better for me, results-wise as well as some of my personal changes I have done. So it’s amazing that is all showing and starting to pay off.”

He said the outpouring of support from New Zealand had been overwhelming.

“I would love to say a huge thanks to everyone in New Zealand who has reached out and sent messages and comments this past week,” he smiles. “It’s amazing to see all the support from home and that really gives me that little extra boost. So, churr …”

“I would love to say a huge thanks to everyone in New Zealand who has reached out and sent messages and comments this past week. It’s amazing to see all the support from home and that really gives me that little extra boost.”

Gabriel Medina, the reigning two-time World Champion, has flown in to a wildcard entry and posted two impressive heat wins on Ujung Bocur’s long lefthanders. Medina was clinical in his approach, surfing with speed, precision and power to post excellent scores in every heat. But his quarterfinal match up against Mitch Coleborn ended Medina’s Krui Pro run.

“I really love this wave – it felt like Fiji out there today!” Medina said. “There are some big sets – it felt really good to feel the power in the ocean. I’m just cruising at this event, surfing and hanging out with local kids. It’s cool to see all the hungry QS competitors getting some good waves. This is my first time to Krui and I love it here, so many amazing waves and people here.”

Stairmand is on a mission, proven by his win at the New Zealand Surfing Nationals and more recently his domination of the Rip Curl Pro in Raglan.

Earlier in the week Stairmand told organisers that these waves at the Krui Pro were some of the best he’d ever had while wearing a WSL jersey. His surfing showed it: he scored two excellent rides in the 8-point-range and finished the opening day with the highest heat total.

“That was a dream heat!” smiled Stairmand afterward. “There were so many good waves, it was hard to not catch everything. I love lefts, I surf Raglan all the time so I felt super comfortable out there.”

With this Krui Pro result Stairmand jumps 72 points to 90th on the International WQS rankings for 2019. He has accumulated 2540 points this season and that puts him in a very strong position for this stage of the season. Paerata-Reid takes his 1680 points from the Krui Pro to leap 84 places into 81st position.

Stairmand will next compete at the Gold Coast Pro scheduled to take place at Burleigh Heads from May 8-12.