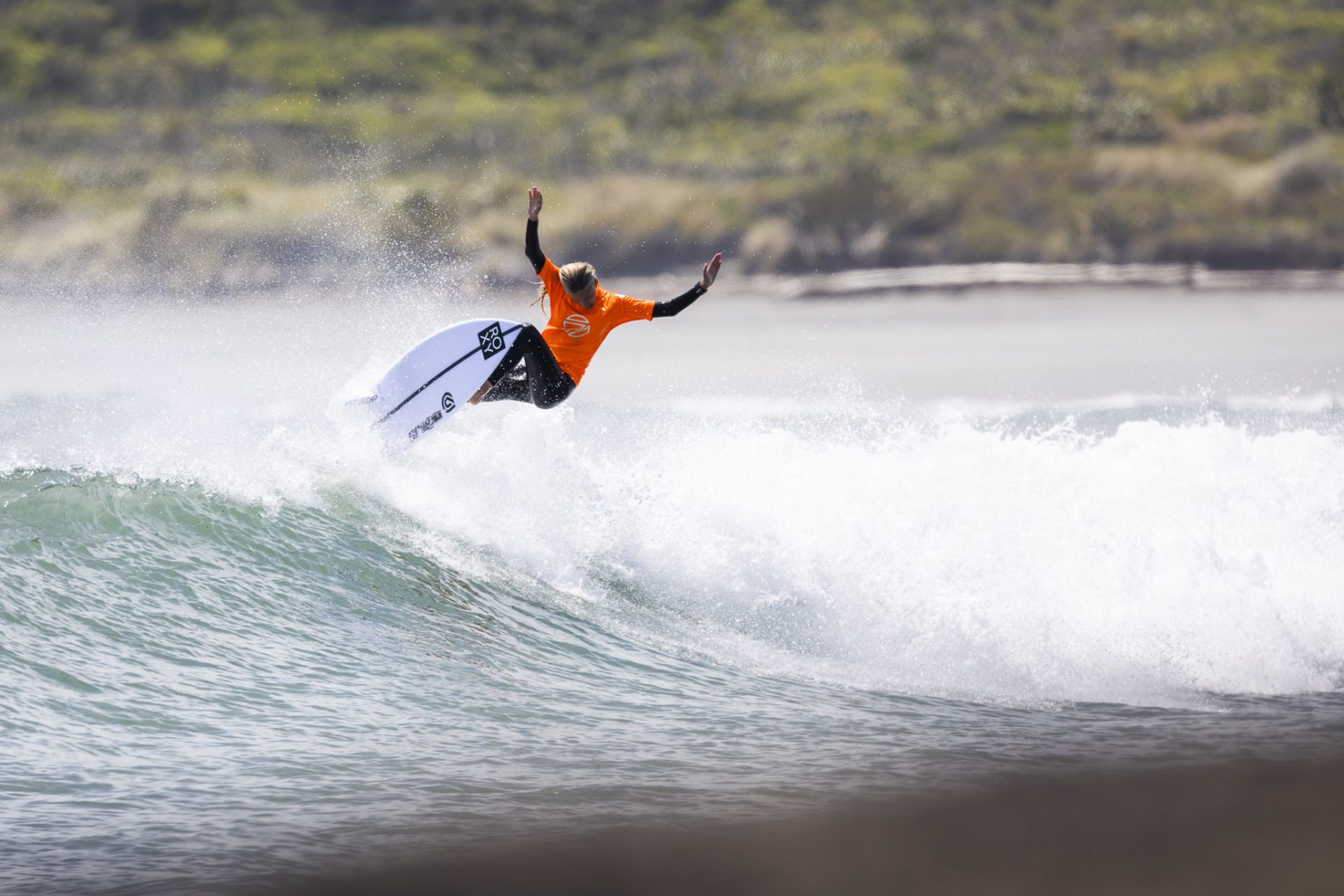 When the West Coast of the South Island is becalmed by an enormous high there is no better place to be than Westport’s Tauranga Bay. With a 1 to 1.4m long-period swell pulsing through and a grom comp about to unleash on the T Bay Superbank, there’s a lot to get excited about. South Island Surfing Association’s Mark O’Malley takes us through the two-day wave fest that unfolded at the weekend.

Tauranga Bay produced one out of the box and proved to be the perfect arena for the YOU Travel Ferrymead South Island Grom Series event number two.

Close to 70 competitors converged on Westport from as far afield as Dunedin, Kaikōura, Canterbury and Nelson. Record entries for this event had the organisers making an early decision to make it a two-day event.

Out first were the Under 18 Boys and it was Myka Black who was thriving in the conditions after a long absence from this event. Jai Oakley, Reuben Lyons, Taine Forsyth, Jack McKenzie and Tyler Perry were also round one heat winners making the most of the solid conditions.

The Under 16 Boys were up next and it was Jai Oakley, of Christchurch, who caught the judge’s eye, landing an air reverse. Others to progress in first place of their heats were James Millar, Nixon Reardon, Jack McKenzie, Dara O’Malley and Luke Rogers.

“I try to work on keeping it smooth, making it look good for the judges and hopefully getting good scores. It’s hard to be patient … you have to wait for the sets when you’re out there, especially in the final against those boys when they’re all ripping.”

Current National Under 14 champion Alexis Owen, of Dunedin, was up in the first heat of the Under 14 Boys and he went straight to work on the peeling right handers. He advanced to the semi finals alongside Tom Robertson. Others to book a spot in the semis were Jack Tyro, Sonny Lyons, Benji Lowen and Rakiatia Tau.

Round two of the Under 16 and Under 18 Boys got underway as the tide turned. The sets started to increase with the incoming tide and the wind remained light offshore. Swell was around the one metre mark and the sun was out in full force, producing dreamy like conditions.

Bailey Pearce, of Dunedin, is one to watch for the future. He didn’t start surfing as young as most groms, but he is a superb sportsman and already has a smooth, natural style. He won his Under 18 round two heat alongside Jai Oakley and Myka Black.

In the Under 16 Boys it was Kaikōura natural footer Reuben Lyons who was looking sharp and landing some big turns. Jai Oakley and James Millar also won their Round 2 match ups.

Another newly crowned New Zealand champion in the Open and Under 18s, Ava Henderson, was out in the water next – making easy work of Round 1 and advancing to the Under 18 Girls’ final alongside North Wai Boardriders clubmate Tui Rudolph. In semi final number two it was the two South Coast Boardriders girls Anika Ayson and Jaya Reardon who got the better of local girls Jesse Roche and Lydia Hawes and advanced to the final.

One of the heats of the day was semi final number one in the Under 14 Boys. Jack Tyro, Tom Robertson and Sonny Lyons went blow for blow on the bowling right handers. In the end it was Tyro first and Lyons second, just squeezing past Robertson. In the other semi there was also some very impressive surfing with two boys from the Under 12 division, Benji Lowen and Alexis Owen moving in to the final.

“There is definitely more pressure now – it’s just like you don’t want to be beaten because you’re National Champ, but you’ve just got to go out there and not think about it.”

The Under 14 Girls’ semis saw the Entwistle sisters from the Point Surf Team in Sumner both making the final alongside Tessa Gabbott and Amelie Clark. To finish off the opening day we had the Under 12 Boys and Girls semis. Local lass Lenka Cargill had the host club getting vocal in their support and pushing her through to the final.

After a bit of a murky start to the day with sea mist hanging around, the lineup soon revealed the swell had increased a touch. Up first were the Under 12 Girls and it was Amelie Clark from the PST club who got a long left hander, rode it all the way to the beach and sealed the deal for the win ahead of Tessa Gabbott, Lenka Cargill and Tessa Langman.

Up next was the U12 Boys and South Coast Boardriders, Alexis Owen, stuck to his game and smacked right handers all the way to the beach. Sonny Lyons, Benji Lowen and Travis Henderson were second, third, and fourth respectively.

Poppy Entwistle took her maiden win in the grom series – taking out the Under 14 Girls’ division. Tessa Gabbott, of Taieri Mouth, was second and clubmates Amelie Clark and Olive Entwistle were third and fourth.

By mid-morning the sun came out, the temperature ramped up about five degrees and the wind remained favourable. The Under 16 and 18 semis went pretty much as expected with Kaikōura Surf Grom team mates, Jai Oakley, Tyler Perry and Reuben Lyons making double finals.

The Under 14 Boys’ final didn’t quite live up to expectations with all surfers struggling with wave selection and where to sit in the changeable line up as the tide shifted in. In the end Jack Tyro added to the PST tally and took the win ahead of Sonny Lyons, Benji Lowen and Alexis Owen.

In the Under 16 Girls final Ava Henderson dominated leaving Tui Rudolph, Eloise Addison and Taya Morrison to battle it out for second, third and fourth.

In the Under 16 Boys, Reuben Lyons made up for his shock first round exit in Event 1 and came out with a solid win. North Wai’s James Millar made a late charge catching a nice left hander towards the end of the heat that elevated him to second. Third was Jai Oakley and fourth Tyler Perry.

The right handers were the flavour of the day, but there were some nice scoring lefts. South Coast’s Anika Ayson found one of these waves in the Under 18 Girls’ final and got off to a solid start with a series of smooth cutbacks on her forehand. This put the pressure on her opponents, but it was North Wai Boardriders Ava Henderson who fought back with some big reos and got the chocolates. Third was Tui Rudolph and fourth Jaya Reardon.

“Yeah, it was pretty fun conditions,” out there smiled Henderson afterward. “A good three to four foot at times. With pretty fun right handers and the odd left. I prefer smaller waves, but good to adapt to these conditions. When it gets too big I need to get my board sorted out. They’re too small, so I just skip across the top of the wave at times.”

Henderson’s campaign throughout the weekend featured some giant critical turns.

“I just like having fun,” she explains. “If you’ve got two solid scores, then you just try to go as big as you can and hope you land it. It’s always fun with the girls.”

The 14-year-old said the pressure to perform has elevated since her National Championship titles in the Under 18s and Open Women’s.

“There is definitely more pressure now – it’s just like you don’t want to be beaten because you’re National Champ, but you’ve just got to go out there and not think about it.”

“I just like having fun. If you’ve got two solid scores, then you just try to go as big as you can and hope you land it. It’s always fun with the girls.”

Reuben Lyons looked like he had a tactic of getting some early scores on the board in the Boys’ Under 18 final. He was picking off the smaller inside rights, clocking up a slew of nice scores before a set had even hit the outer bank. Former New Zealand representative Myka Black sat patiently and was eventually rewarded, bringing his rail game into action on some big rights and producing some big finishing turns – sealing the win with his last wave.

“I heard rumours there was a real good bank here,” offers Black, “But I was surprised how good it was. It’s normally really big and washy out there because it’s the West Coast. It’s awesome to get some good waves for the contest.”

16-year-old Black was the form surfer throughout the competition mixing a combination of power with critical turns and flow. He waited patiently for the best waves that would allow him to do that.

“I try to work on keeping it smooth, making it look good for the judges and hopefully getting good scores,” he smiled afterward. “It’s hard to be patient because I’m not used to getting many waves where I’m from. So you see a little one come and you really want to turn catch it, but you have to wait for the sets when you’re out there, especially in the final against those boys when they’re all ripping.”

Early in the Under 18 final Lyons clocked up a lot of waves on the inside, but it didn’t rattle Black.

“I knew I had to stick to my game and wait for the good ones out the back and it paid off. I got one real nice one and then got one right at the end and thought I might have done enough on the last one to take it out.”

Kudos must go to the Buller Boardriders Club who put on a spread the Mayor would have been proud of with home baking, fresh fruit, sausages, whitebait sammies, bacon and egg sandwiches … the list goes on. And believe it or not it was all free for competitors, event team, judges and supporters. What an impressive club! The club also had one of New Zealand’s surfing greats, Jai Earnshaw, in attendance to help the groms and take a seat in the judges’ box.

Many thanks to our sponsors YOU Travel Ferrymead and Exit Surf. And to SISA for putting on this contest and all the judges and officials who helped out.

Next stop on the YOU Travel South Island Grom Series tour: Greymouth, February 15-16