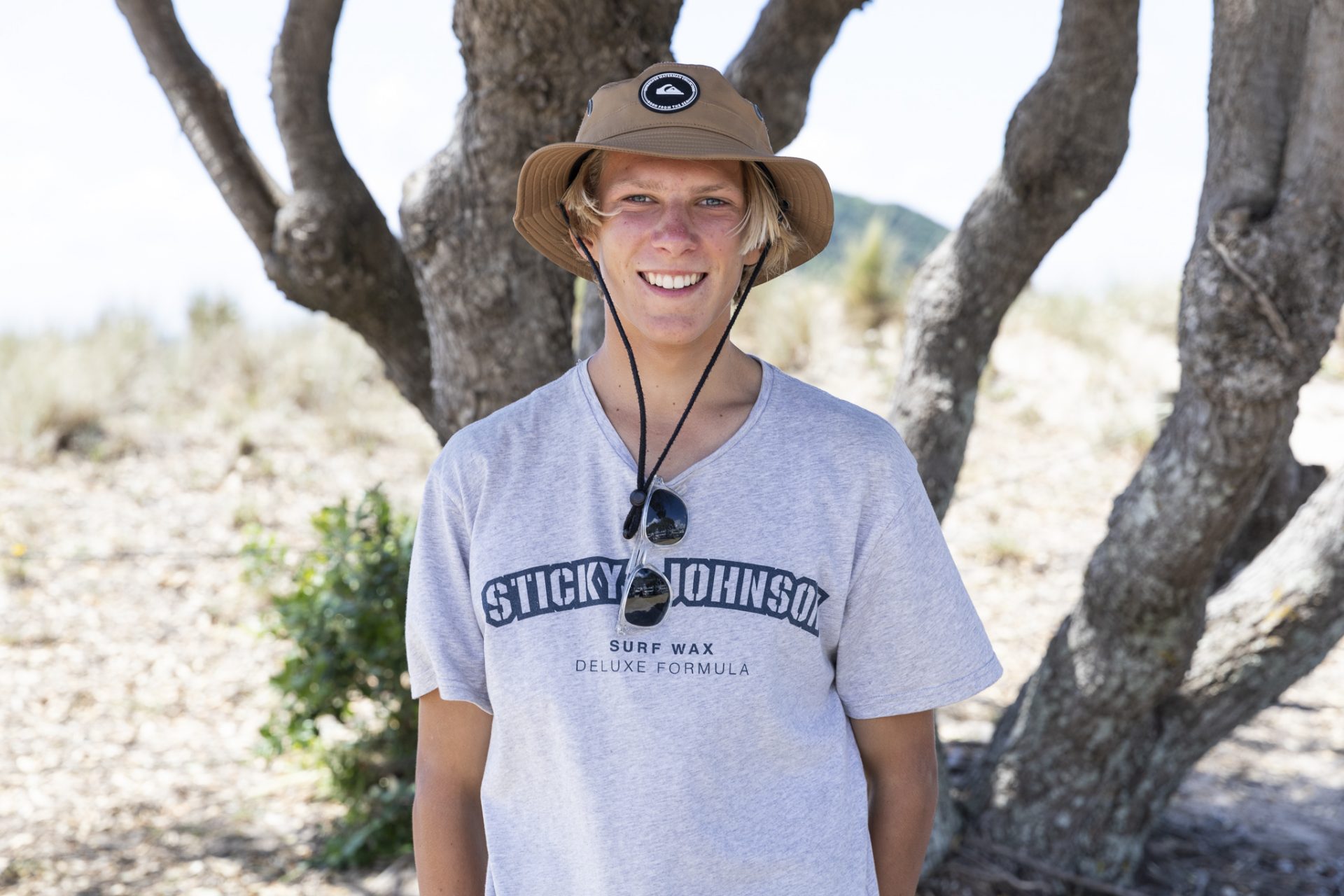 Almost two years ago the Klein-Ovink family realised they had life back-to-front. They lived in Auckland and traveled to surf. So they uprooted the family home and moved to Papamoa. For 17-year-old Isaac, his older sister, Baylin, and younger brother, PJ, that was a dream come true.

NZSJ: Tell us where you live now, Isaac.

Isaac Klein-Ovink: I’m from Papamoa right near a break called Pony Club. It’s my local surf spot just over the road from my house. When it gets big it can set off a pretty good righthander. We haven’t been living there long. We’re originally from Auckland, but we moved to the Mount last year and this year we’re living in Paps. We’ve had a summer there now and the end of winter last year.

NZSJ: You’ve moved into a new house is that right?

Isaac Klein-Ovink: My parents built a new house right across from the beach and it’s been pretty good. We surf everyday – even when it is flat. I’m pretty happy to be out of Auckland and living in Papamoa. I surf every day compared to once every week. And when there’s swell I’ll surf three times a day.

NZSJ: We managed to catch you during that recent cyclone swell. Run me through that.

Isaac Klein-Ovink: It was glassy in the morning about three foot with some fun as walls. A couple of dudes got a few barrels. I didn’t manage to find one though. The double ups were pretty sick. When we first rocked up there was a right that was working really well. Then the swell just slowly dropped off. It turned out it was the spot on the coast. Everyone was saying the Mount was just too raw and the banks sucked. It is so good to just be able to walk to the beach as well and surf a swell like that.

NZSJ: So how much more are you surfing now?

Isaac Klein-Ovink: We’re just surfing a lot more – like a hundred times more. All the time – even when it’s flat and onshore, me and PJ will go out. We’ll text a few mates, Jack Hinton and Tao Mouldey, and PJ surfs with Tyler Stenzel heaps. They’re both home-schooled so they just surf together all day. It’s pretty amazing.

NZSJ: What are you doing for school?

Isaac Klein-Ovink: I left school at the end of last year in year 12. So now I’m just looking for jobs and then once I get a job I’ll earn a bit of money and figure some things out. I turned 17 in November, so I just miss out on the cut for the next Grom Series. This is my last one.

NZSJ: How has the Grom Series been going for you so far?

Isaac Klein-Ovink: I won my first heat and my second and then got knocked out in the semis at the opening round at Mount Maunganui. It was small as – I was gutted that I didn’t have a good one in my semi though. It was still fun. Here at Whanga, I went alright, I got some good waves. Me and Jack were in the same heat again and it’s hard surfing against your best mate. He won and I got second. In my quarterfinal I got knocked out. It was a hard heat – I was with Jack again, Kora Cooper and Ari D’Anvers. Me and Kora got knocked. It was a close heat – just 1.5 between fourth and first place. Everyone was getting waves – it was hard. The Under 18s is pretty stacked.

NZSJ: What are you planning to do with your surfing from now on?

Isaac Klein-Ovink: I’ll probably just keep making goals. My goal is to do well in Piha. And then other than that just to get out there and keep surfing as much as I can. I love the bigger days. I’d go barrels for the rest of my life over anything. I’m trying to get a bit more ballsy – hoping to get some bigger waves at The Island. I’ll probably chuck my fins in my older board and take good care of my magic board right now.

NZSJ: Do you help your younger brother, PJ, out a bit?

Isaac Klein-Ovink: In the water we’re real competitive – we’re nice to each other, but we’re really competitive still. I help him sometimes before heats, especially when he’s nervous. I just tell him go out and have a surf, that’s all you’re doing. He listens to Dad more than me.

NZSJ: How cool is it traveling around in your family motorhome for these events? With your number one fan a brown labrador named Cruz?

Isaac Klein-Ovink: [Laughs] Cruz is actually quite annoying. No, he’s super good. The motorhome is really nice – you can park on the beach, have a sleep when you need to, something to eat and get out of the sun. It just makes it really easy.

NZSJ: Sponsors – tell us, who’s got your back?

Isaac Klein-Ovink: Right now I’ve got J-Dub – he gives me a deal with his boards. This latest board that he’s made me is actually insane. It’s a Mutant model, but it’s custom to me. It’s just so fast – it’s a 5’8″ and I think it’s 25.5 liters, or maybe 26. It’s super sick with a really cool fluro pink spray job. It looks so good. I love it. I don’t even want another board, it’s just the sickest board. I didn’t know that you could get a board that good, it just does everything I want it to.

NZSJ: What’s next for you as far as comps go?

Isaac Klein-Ovink: We’re hoping to go to Kaikoura for the South Island Grom Comp and the new Pauanui Grom Comp. That should be really good. I know that wave the most out of anywhere. When we lived in Auckland we took so many days off school to go surf there with the Groubes. I was there most summers, too.

NZSJ: Who surfs the best out of you, your Mum and Dad and your brother and sister?

Isaac Klein-Ovink: I would say me, for sure. [laughs]