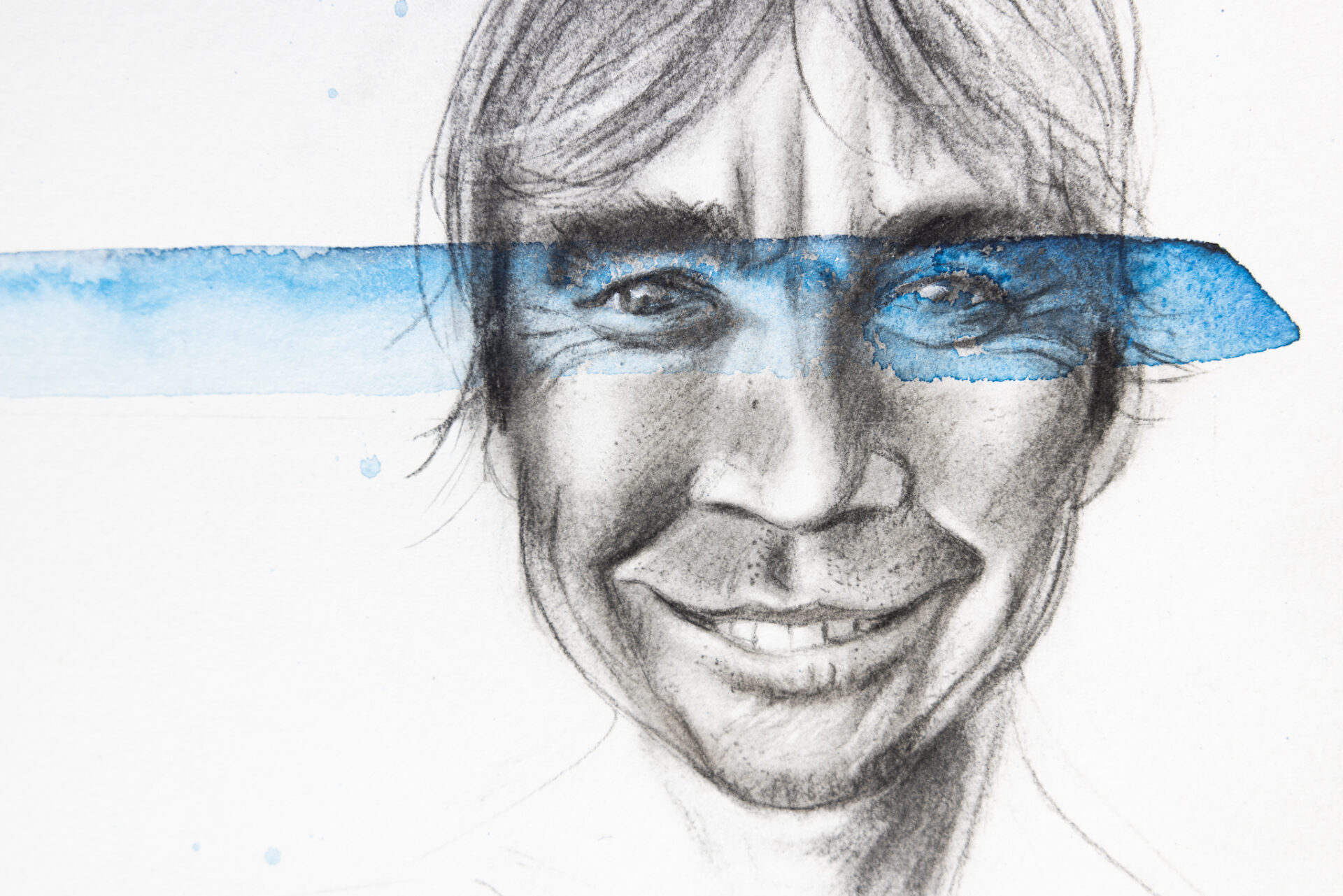 The accepted version of Gerry Lopez is all too familiar. He will always be known as the Zen tube master at Pipeline, standing arched backed, on a glistening red surfboard, encased in a cone of azure-blue water.

His exit from the barrel was just as transfixing, the chevron mustache barely hiding a wry grin, the smooth cruise out onto the shoulder like an albatross changing course for home. Then there was the happy go lucky, “Ah shucks, you know, I guess I was just in the right place at the right time,” personality.

For those uninitiated into surfing folklore, Lopez’s story occupies a sacred place in the wave-riding pantheon. He wasn’t the first to tame “The Pipeline” on the North Shore of Oahu, Hawaii, one of the most dangerous waves in the world, but he was the first to make it look beautiful.

Lopez’s story occupies a sacred place in the wave-riding pantheon. He wasn’t the first to tame “The Pipeline” on the North Shore of Oahu, Hawaii, one of the most dangerous waves in the world, but he was the first to make it look beautiful.

In the mid to late ’60s when a haircut was a political statement about values and attitudes, surfing was considered the dropouts’ pastime for overgrown children and war veteran flame outs. Enter a skinny kid (with a bad haircut) from Punahou High, the Hawaiian equivalent to New Zealand’s Christ’s College.

Surfing’s lazy stereotypes were about to be updated. On graduating from his prestigious school, he was aiming to study architectural engineering. However, the allure of Pipeline and the exploits of surfers like Jock Sutherland and Butch Van Artsdalen drew him deeper and deeper into surfing’s holy grail – the Pipeline tube.

There is a lot of flighty rhetoric surrounding Lopez’s (later) success at Pipe, “the spiritual connection with the ocean … being at one with nature”. But aside from all that, early days at Pipeline for Lopez were both a physical challenge and an engineering problem. Surfboards in the late ’60s just didn’t fit inside those roaring cupped-out caverns. Boards either side-slipped down the face, poked their nose or had their tails hung up, and ripped over the falls.

When Lopez was coming of age, boards were going through an identity crisis. Some builders were sawing theirs in half. Others persisted with 9-foot logs. These boards got them into waves early, in the Hawaiian juice, but then sent their arms and legs flaying once their unwieldy rails hit the trough. It’s hard to have any kind of style with your toes gripping the deck for control.

To throw your arms into the dark waters, well behind the peak at First Reef Pipeline, water surging off the reef, with a full view at the coral heads just below is a terrifying prospect for anyone, on any kind of board.

To throw your arms into the dark waters, well behind the peak at First Reef Pipeline, water surging off the reef, with a full view at the coral heads just below is a terrifying prospect for anyone, on any kind of board.

Lopez’s exit-stage-right from college meant that his engineering aspirations were channeled into shaping his own boards. Day after day he would ride a newly shaped board at Pipe only to break it within the week. Trudging up the sand with two halves of his new board under either arm, Jimi Hendrix’s Purple Haze blaring from the beach house porches, he would be visualizing a new curve, a new shape, something, anything to stop him from breaking his neck on the reef. The big leap forward was the shape of the rail.

To make a long story short, Mike Hynson, the same guy who rode that mesmerizing right hander (Cape St Francis) in the film Endless Summer had discovered the “down-rail”. So instead of rails with the curvature of a golf ball, his rails curved down to an edge, just the thing Lopez needed to come off the bottom of a wave and check-turn mid face. Add a little tail rocker, and the dance with death was now closer to a magic carpet ride – at least for Lopez anyway.

With the physics slanted more in his favour, now he needed a “physical” edge. In his early 20s he came across a yoga teacher who changed his life. He couldn’t believe how smooth the instructor moved, “from one basic asana [pose] to another …” The herky-jerky survival stances and awkward out of control turns he found in everyday surfing (and in his own surfing), could be smoothed out with some conscious intention to quieten his body language, and to find graceful moments in extreme situations. “Wow,” he said, “If you could move like that on a surfboard you really would have it licked.”

“Wow. If you could move like that on a surfboard you really would have it licked.”

It worked. The cameras ate it up and there are thousands of indelible images to prove it. The quiet skinny kid from Punahou High became a stone-cold surfing superstar. For a while, everyone wanted to be Gerry Lopez. Everybody wanted to have a red board with a Lightning Bolt logo emblazoned on the deck.

But, after several years, where he pretty much had his pick of waves at Pipe, surfing moved on. In a cultural sense, Pink Floyd’s Set the Controls for the Heart of the Sun got ripped off the turntable and replaced by The Stooge’s Search and Destroy. No longer did the best surfers want to be the cool hippy in the eye of the storm. Punk rock culture hit the beaches, and many ’80s and ’90s line-ups were haunted more by surfers resembling Iggy’s, “…runaway sons of the nuclear A-bomb”. Lopez’s smooth transitions were out, and Christian Fletcher’s raw aerial spontaneity was in.

Lopez must’ve seen the writing on the wall and, soon enough, he was ready for a change. He sold his Pipeline house and moved to Bend, Oregon, where he took up snowboarding with the same fervour that launched his surfing career. However, his indelible mark never left the sport of surfing.

Despite the never-ending cycle of ridiculous fads and fashions that any culture goes through, the purity of Lopez’s act at Pipe never went out of style. You can see it in the moments when John John Florence looks for the barrel, the arm in the wave face, the slight slouch, the low front arm. You can see it even more clearly in the surfing of Stephanie Gilmore, the stylish, languid highlines, the hands poised and relaxed, followed by a series of searing turns. Both of these surfers have, in modern times, formed a bridge from the smooth, groovy ’70s to the slash and burn excitement of the ’80s. The hippies and the punks have merged and man is it exciting.

Surfing is in a great place right now. The embarrassing adolescent stage is over and instead we have a synergy of old and new. Lopez’s unique career was the forerunner for all of this. His recipe for success seems simple: family, diet, health, open-mindedness and … it’s got to be said, pure guts.

Surfing is in a great place right now. The embarrassing adolescent stage is over and instead we have a synergy of old and new. Lopez’s unique career was the forerunner for all of this. His recipe for success seems simple: family, diet, health, open-mindedness and … it’s got to be said, pure guts.

The growing maturity of the sport can be found in the new criteria for 2023 Vans Pipeline Masters. Aerials on the end section will be rewarded as highly as the tube ride. The invitees list includes men, women, tube specialists, aerialists and stylists. Different board types will be appreciated and respected. All of these developments would have been laughed at 10 years ago.

It’s too soon to talk about Gerry Lopez’s “legacy” because he has plenty of gas in the tank and plenty of moves still to make. His success, so far, appears to be all about balance – not in the obvious sense, but more in the taming of the “monkey mind” that we all battle with day-to-day.

How hard would it be, not to have a massive ego if your days consisted of being blasted out of crystal-clear cathedrals of water to the applause of crowds and the clicking of cameras? How many of us would end up being washed up blowhards droning on about the plight of modern surfing?

The jaded star is not Lopez’s jam. He is now an unofficial ambassador for the simple act of gratitude. In interviews, he constantly reminds us that in our lifetimes, the “Sport of the Kings” has developed almost beyond recognition and helped to spawn other life-changing sports like skating and snowboarding. And these are sports that transcend being simply pastimes and hobbies. They are more than just “fun”. They teach us lessons that we bring back to the everyday world and make all our lives better.

He might be right. He is lucky to have grown up in the right place at the right time, but we are all just as lucky to have his example to follow. He is often asked, by well-meaning devotees, questions about how to cope with a complicated, modern world. After calmly and respectfully giving fatherly advice, he sometimes ends with the perfect metaphor for a life that is a constant struggle for most of us, “Just keep paddling man”.

All art in this story has been created by the author, Darren Eade.