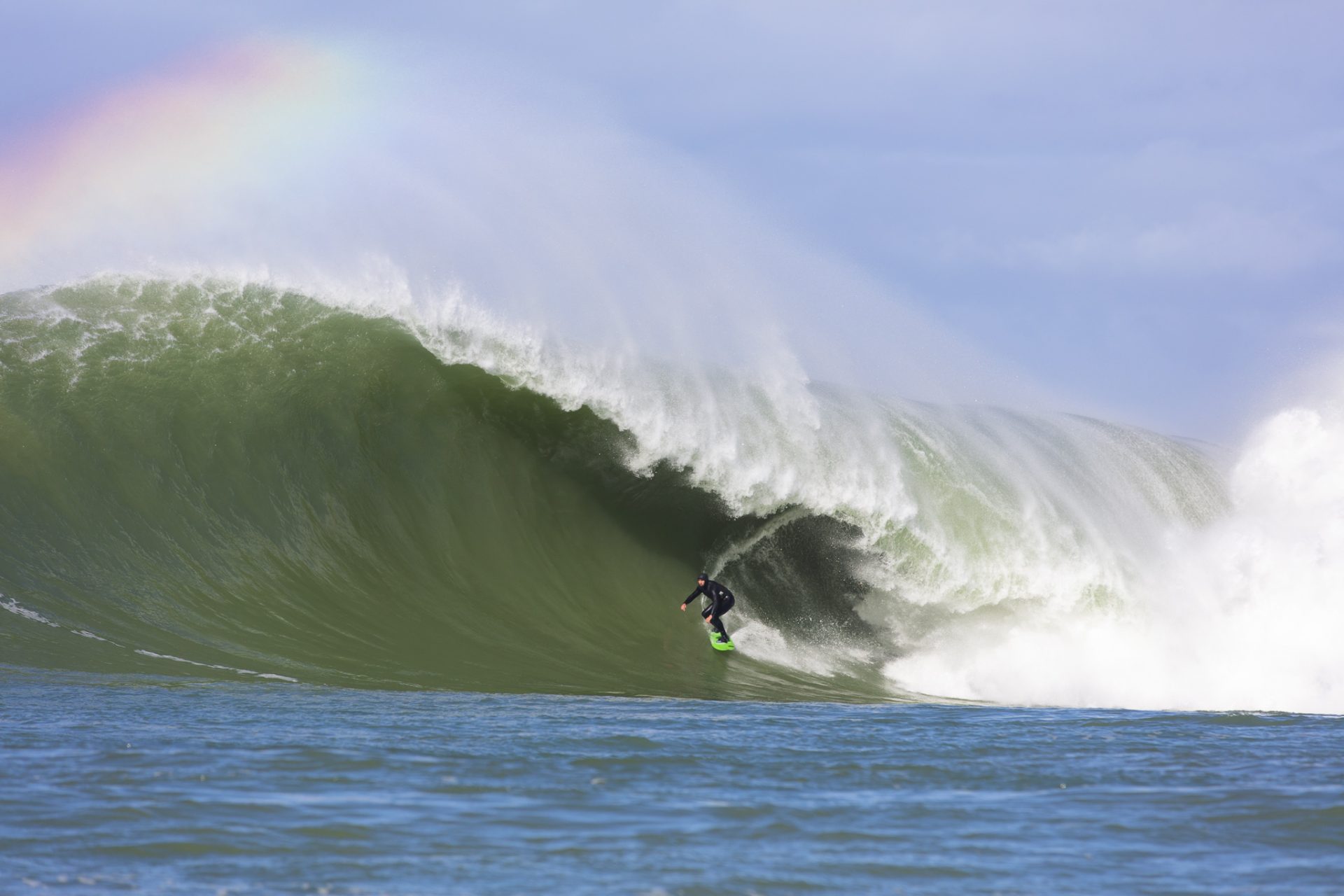 A late-season swell offers one last roll of the dice for New Zealand’s big-wave riders and the stakes are high. As the winds swing through the ideal bearing the focus falls on a reef on a remote corner of coastline. Four teams of surfers get the session of a lifetime.

The blob of swell energy was as peculiar for its dark presence on the charts as it was for the area it covered. Forecasts had it making a direct hit on the southwestern extremities of Fiordland sending half the swell up the Tasman to light up the West Coast, as had been the norm all winter, but this time the charts predicted enough would escape around to the east.

That was all the promise Dave Lyons, of Kaikoura, Doug Young and Dan Smith, both of Christchurch, Davy Wooffindin, Dale Hunter and Sam Hawke, of Dunedin, and Catlins locals, Brad Roberts and Nick Smart, needed to give chase. Driving for me was Dunedin tow-surfer Dave Wild.

The day before we had hit another reef – not as big, but a great warm-up to the main event nonetheless. Now we faced the pre-dawn ocean and heard the deafening roar of a set collapsing on the reef below our vantage point. The swell was here and we expected it to peak within a few hours of sunrise.

I knew it was going to be a serious day when Doug started to drink the juice from a jar of gherkins.

“Haven’t you heard about gherkin juice?” he asks me. “It’s the best thing to stop cramps – it’s so good all the All Blacks use it.”

And with that he drains the juice and throws a couple of gherkins down the hatch for good measure. Dan, better known as Delta, shakes his head. The cold wind bites straight through my jacket as I contemplate climbing into my wet wetsuit. It’s 2°C. The ocean is roaring. The collective nervous energy is palpable. But curiosity overwhelms it.

The cold wind bites straight through my jacket as I contemplate climbing into my wet wetsuit. It’s 2°C. The ocean is roaring. The collective nervous energy is palpable. But curiosity overwhelms it.

As soon as we’re faced with the bar crossing we are acutely aware of the size and intensity of the swell. It seems relentless. Giant faces of foaming whitewater standing tall to block our path. Dave finds a way through the maze, squeezing every pound of power out of the ski to reach the line-up.

The line-up is not much of a safe-haven. The noise is frightening. The peaks roam in wildly and lurch over in an almost waxy, surreal motion. It’s big, hollow and the most powerful I have ever seen it. We watch three sets and while the waves look clean they are menacing. Delta thinks otherwise and is soon flicked into a giant wall. He fades way more than seems reasonable and sets up for one of the biggest barrels I have ever seen. It pinches and he finds a gap and punches through only to lose his balance out on the safety of the shoulder. The channel erupts in a cheer that is partly relief and partly astonishment. The bar has been set.

The sets continue to pour through as the tow teams scurry into position. Doug takes off deep and finds a wide barrel, then Dale lines up one of the biggest walls. Davy and Nick latch on to the mid-size ones and trade some nice rides. Dave Lyons sits watching nervously with us before offering his assessment: “this is serious,” he laughs. “I’m not sure I’m ready for this.”

I’m confused by his self-effacing remark having watched him instinctively ride the slabs from the day before with ease. He dispels all notions when he grabs the rope and slingshots into a beautiful peak and tucks perfectly into one of the best barrels of the session. He blasts out of the tube with a giant grin.

Sam is chomping at the bit to get into the arena and take a wave, but waits patiently for his turn. Eventually it comes around and he orders up one of the bigger waves in the sets. Way outside a wave feathers and Sam is quick to jostle into position. He makes his run and slices up the reef scanning for his exit point from the rope. The set is big and it pushes across the reef with an ugly warped face. Sam lets it go beneath him and instead launches off a chop in the top of the wave. It’s enough to send him flying and creates a slack in the line that soon goes taught and wrenches his shoulder out of the socket in the process. He’s only just come back from shoulder rehab and knows instantly that he’s popped it. The pain floods in, ending his day.

The peak of the swell has definitely passed with just a couple more big sets finding the reef. Delta wastes no opportunity and clocks up even more tube time along with Doug and Dave until the wind slides south on its bearing and fouls the line-up.

We head back in to the bay and reflect on one of those rare days when the stars align. Few of us have witnessed this reef in that shape. Its ingredients of wind, tide and swell combination are rare. The glow of a session like this lasts for weeks and I imagine for the surfers that feeling would be even more intense. That’s what makes it worth driving through the night for.

Author’s Footnote: A huge thanks to Dave Wild for driving the ski for me to shoot from and thanks to all the surfers who pull together as a team to make these moments happen and to ensure everyone gets home safely. Arohanui.