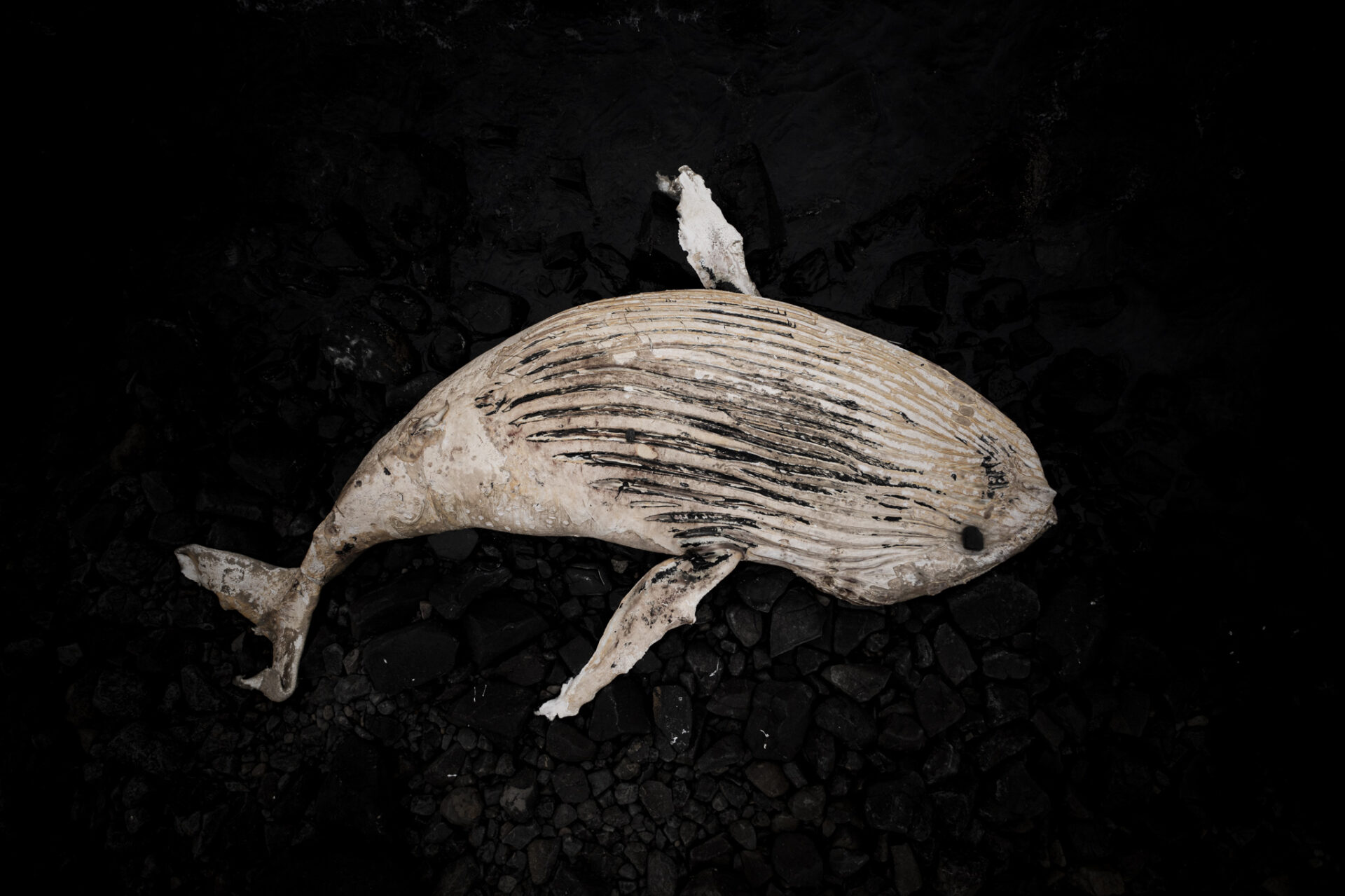 Decomposing whale carcasses have been described as being like “crack cocaine” to great white sharks. So when a young humpback whale washed up in close proximity to some of Dunedin’s best waves, the alarm bells started ringing. According to shark expert Riley Elliott, that’s for good reason.

“Whale blubber is one of the most sought after food items for great white sharks,” Riley explains. “It is easy to obtain when available and is massively calorie rich. White sharks will congregate around a whale carcass after following the scent trail of it, which over time can span many kilometers.”

“Whale blubber is one of the most sought after food items for great white sharks. It is easy to obtain when available and is massively calorie rich. White sharks will congregate around a whale carcass after following the scent trail of it, which over time can span many kilometers.”

“That makes it dangerous for water users to be in that pathway,” he shares. “Hence, there is justification to avoid being in the vicinity of a whale carcass for as long as it is present. Whites sharks in Dunedin are the major risk species, although rare, however other adverse shark interactions could occur in a similar way from other species such as seven gill sharks, blue sharks, or mako sharks.”

Riley is well placed to comment – he is a surfer and spent seven years in Dunedin while working on his Marine Biology Degree. He also completed a doctorate in shark migration and behaviour.

The arrival has sent local Warrington residents into a frenzy of research and action. Most residents and beach users are calling for the whale carcass to be removed.

Rhys Owen lives in Warrington on the North Coast of Dunedin. He is the father of Jake, Alexis, Zara and Thomas. His wife, Jackie, also surfs at their local beach. Jake is a top surfer in his age group nationally and Alexis is twice national champion. But the Owen family have been forced to change their own surfing behaviour. They used to surf nearly every day out in front of their own home.

“Our preference now is to surf at other spots like St Clair on the South Coast,” he admits. “We won’t surf at Warrington or Karitane until the whale has gone.”

Rhys and his family have done their research and found a clear link between dead whales attracting sharks and changing their behaviour. His research included articles from experiences in Australia and scientific findings.

“There is a lot on the internet from experience in Australia where the local council’s often remove dead whales to reduce shark risk to water users,” Rhys shares.

Whale carcasses often wash up – usually for short periods of time at one location – around New Zealand. Earlier in the year surfers Dawson Tamati and Jarred Hancox stumbled across a rapidly decomposing minke whale carcass at Belt Road, Taranaki. Local fishermen confirmed an increased presence of great whites in the vicinity. The pair recommended surfers avoid the area for a period of time.

From 2015 to 2018 there was a spate of shark attacks, mostly attributed to great whites, that terrorised surfers in the Ballina area of northern New South Wales. Wild theories started to swirl around until the local council admitted burying a whale carcass in the dunes.

“There were tests done which confirmed that for a long period after its burial, whale scent was leaching into the ocean as the whale was not buried far enough away from the water,” confirms Riley. “This leaching scent was suggested by some to have coincided with increased shark presence and a spate of adverse interactions.”

Rhys said he’d like to see DOC develop a plan for whale carcasses washing up along the coastline.

“I’d like to see DOC be more proactive in removing dead whales before they get fully washed up on a coastline or rocky reefs,” he explains. “In this case the whale bobbed around off Warrington for a week and during this time it could have been towed out to sea.”

Riley said that consultation with local iwi and DOC was a legal requirement and any decisions should be made in conjunction with these entities. He warned that their priorities may not represent the interests of water users, as it was not their role.

“Commonsense would suggest moving the whale to a location where its long temporal period of decomposition will not overlap with water users,” he advised.

Brendan Flack is a long time surfer in the area and chair of the East Otago taiāpure. The whale’s presence also affects their work in the immediate marine environment, including reseeding paua and dealing with invasive weed species.

“The hapū of Kāti Huirapa ki Puketeraki look upon the event with sadness that the whale has died and would like to understand how and why,” Brendan explains. “But also see this as an opportunity for learning, and practicing our tikanga around one of the treasures of Takaroa.”

“Every time that humans enter the ocean in Otago, there is a chance of meeting up with some of its residents,” Brendan added. “A dead whale can be a real boost to the ecosystem as it decomposes, so it’s likely that there might be more wildlife activity in the area as the whale does break down. We are working with the Department of Conservation to monitor the situation, and suggest that people follow the advice of the Department regarding choosing places to surf.”

Rhys said the community wanted the whale carcass to be towed to Warrington Beach and buried way back in the dunes, “far enough back so the oils don’t leach to the sea”.

The whale’s current location means it is bordered by steep, wet and unstable land access, and 300m of offshore reef. That greatly increases the risks of trying to tow the whale. They were considered too great by those with the vessels and skills capable of undertaking such an operation.

Department of Conservation’s biodiversity ranger for Coastal Otago District, Jim Fyfe, has been on the front line for more than 20 years in Otago dealing with cetacean strandings – the majority of whales being dead on arrival. He said it was not the simple process some beach users think it might be – every scenario was different and every scenario brought its own story.

“Together with rūnaka, researchers and the Otago Museum we work through the questions and challenges an unexpected new arrival presents,” Jim explains. “Inevitably some questions will go unanswered. This is the first scenario in recent times where logistical challenges have made it impractical to move or bury a whale washing up this close to Dunedin. Stranded whales are also a taonga. Their arrival may have particular customary significance and also provide cultural materials. In this case the whale came ashore in the East Otago Taiapure – an area for which Kati Huirapa rūnaka ki Puketeraki successfully established their mana moana and kaitiakitanga of the local fisheries management. We have therefore been particularly mindful of the views and aspirations of the rūnaka.”

“Stranded whales are also a taonga. Their arrival may have particular customary significance and also provide cultural materials.”

He said that because of the concerns voiced about sharks the rūnaka and DOC had explored and exhausted options to move or bury the whale.

“It will therefore be left at site and we are investigating how this might be managed,” Jim adds. “I should remind people that it is not DOC’s role to make the sea risk-free. Water safety education aims to help those involved in water sports understand the risks and we will communicate risks where we know circumstances have changed. We often bury whales where this is practical and this action can stop it from becoming a public nuisance, but DOC does not have an obligation to remove what is essentially a natural hazard at a remote site.”

Brendan added that whale carcasses coming ashore were a fairly uncommon occurrence and were a reminder to us all that mankind is part of a large system that we could not always control.

“This situation is not permanent, and while it may seem inconvenient to need to adjust some of our recreational activities, it will provide a lot of food to our declining fisheries and associated marine environment.”

In an email sent to concerned parties it was indicated that part of the whale’s management included the use of baited video cameras to monitor shark activity in the immediate area, further discussion and research to identify the pros and cons of different techniques to speed up the decomposition of the whale, signage to alert beach users and setting up a framework for communicating the state of decay of the whale and the nature of associated discharge.

“The hapū of Kāti Huirapa ki Puketeraki look upon the event with sadness that the whale has died and would like to understand how and why. But also see this as an opportunity for learning, and practicing our tikanga around one of the treasures of Takaroa.”

Kati Huirapa Runaka ki Puketeraki manager, Suzanne Ellison, said that, together with DOC, they explored every possible scenario about moving the whale and/or speeding up natural processes.

“This consideration was done from a practical view with safety to the forefront, as well as from a tikaka perspective thinking about the realm of Takaroa that we are dealing with,” Suzanne explains.

A decision was also made this week to let a 17-metre sperm whale that washed up on a popular Nelson Beach last week to decompose naturally.

“In the meantime,” Jim urges, “Please be patient, sensible in your choices about where to surf, and accept that nature still presents challenges that we really don’t have much control over.”

We asked Riley how surfers can best mitigate the chances of an interaction, given the decision to leave the carcass in place.

“There is no definitive answer here, but rather there is fact,” he offers. “Sharks will be attracted to the scent of a whale carcass, for as long as that carcass is present. Because the ocean is a fluid environment, it is impossible to track the movement of such scent, and thus try and avoid surfing or swimming within the scent trail.”

“The best approach is to avoid the area entirely.”

Surfers are advised to be extra cautious when surfing the breaks between, and including, Karitane and Mapoutahi Pa while the whale carcass is present. The scent is expected to float on seawater so will be particularly vulnerable to wind conditions. Stay safe and let people know if you spot sharks or increased bird activity in the area.

“In the meantime, please be patient, sensible in your choices about where to surf, and accept that nature still presents challenges that we really don’t have much control over.”