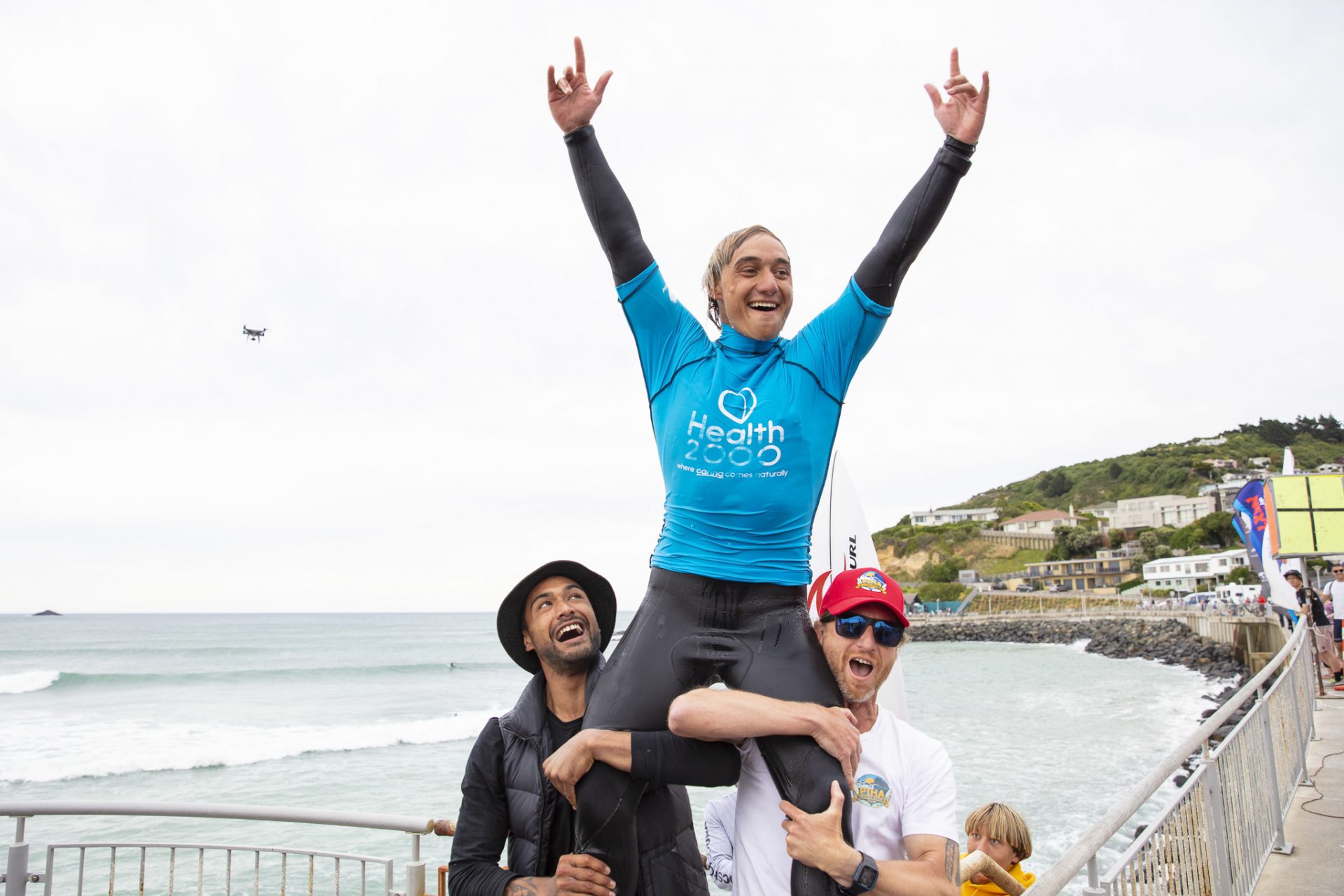 Piha surfer Elliot Paerata-Reid has claimed the 2020 National Open Surfing Title after a thrilling final battle with seven-time and defending champion, Billy Stairmand. In the women’s, 14-year-old Ava Henderson rose to the top with a polished performance to take her first open title.

St Clair Beach, Dunedin produced clean waves of up to 1m with offshore winds all day, but the swell size decreased through the afternoon and the incoming tide turning the swell tap off at the conclusion of the event.

23-year-old Paerata–Reid brushed away his three previous finals appearances to take the win while 14-year-old Ava Henderson was competing in her first final, converting it to a title.

Paerata – Reid had to overcome seven-time and defending champion Billy Stairmand (Rag) in a see-saw battle that eventually went the way of the Piha surfer 15.17 to 13.80.

“That is my fourth final in a row,” smiled Paerata-Reid afterward. “I have won every semifinal for the last three years and beaten the eventual champion each time so I knew I could do it, I just needed to put it together in the final.”

“I didn’t really feel like I did my best surfing until the final this week. I had a bit more to give, but yeah, I just looked at it a bit more like a job this week and took it heat-by-heat and it worked.”

Paerata–Reid got off to an early start with a 6.0-point ride and quickly backed that up with a 7.10.

“Conditions changed a lot before the heat; the wind changed, the swell died and I saw a few lefts and I knew that I could get some seven and eights on the left and that’s how it panned out,” added Paerata–Reid. “Then Billy got that right and did an air and I knew I had to go as big and I was happy to get the upper-hand.”  In that final exchange Paerata-Reid bettered Stairmand 8.07 to 7.4.

“It is good to get a title and get one on the board, maybe I can get up to seven or eight like Billy one day,” he mused.

From the podium Paerata-Reid acknowledged the standard of surfing on display in the junior ranks throughout the event, “the future of New Zealand surfing is in good hands”.

Stairmand had to settle for runner-up, unable to find his eighth title while Taranaki surfer Daniel Farr finished in third place unable to pull off the big manoeuvres in the final. 18-year-old Caleb Cutmore (Rag) finished in fourth place in the final.

“I started to believe I could win when I got a five and I only needed another five to lead and I had already got that score and I hadn’t actually surfed to my potential,” she recalls. “I knew if I got a few good turns in, I could get a six or higher. Then when I was leading toward the end, all I wanted was for the time to speed up, because I had priority and I knew I could control the final.”

“I am so stoked on the win, I can’t really believe it,” she smiled from the podium. “I mean my goal was to win the 16s at this event and do well in the 18s, I wasn’t actually going to do the opens, but I convinced mum to let me, and now I have won.”

In the Under 16s, Henderson finished third after a tough final. She admitted later that she took the energy from that result and directed it at her Under 18 and Open final berths. She was the only surfer to make three finals at the event.

Henderson also claimed the overall Standout Performance of the event for her efforts across the week.

Earlier in the day titles were awarded across the age group divisions firstly in the senior divisions where Raglan’s Geoff Hutchison claimed his second title in the Over 50s after claiming the Over 55s Division yesterday.

Gisborne’s John Gisby shattered his own record with a 38th title this time in the Over 60 Men’s Division.

Chris Malone (Rag) won the Over 40 Men’s Division over Jarred Hancox (Tara) while Hancox reversed the result in the Over 30s claiming the title over Malone.

Junior Divisions were won by local grom Alexis Owen and Amarnie Barber (Aus) in the Under 14s, Barber defending her title. One of the form surfers of the week, Finn Vette (Gis), won the Under 16 Boys Division as did Liv Haysom (Piha) in the Girls Division.

The Under 18 Boys Division was won by Jack Lee (Whaka) who beat Tom Butland (Tara) in the final. Ava Henderson claimed her first title of the day in the Under 18 Girls Division defeating Georgia Wederell (Mnt).

2020 marks surfing’s debut as an Olympic sport and come July, New Zealand will have at least two athletes competing at the inaugural surfing event in Tokyo.

The Health 2000 National Surfing Championships is the first of several domestic events where Kiwi surfers will get the opportunity to push for selection into the New Zealand Team that will attend the World Surfing Games in May. Under International Surfing Association (ISA) guidelines, Stairmand and Williams along with Paige Hareb (Tara) and Ricardo Christie (Gis) are automatic selections for the New Zealand Team leaving only one spot each for the men and women.

It is the eighth time the National Championships has been held at Dunedin. In the 56 year history of the event the Health 2000 National Surfing Championships has grown to encompass 29 divisions spread across all disciplines and age groups making for a largely inclusive event, filled with high level surfing as well as good times in and out of the water.