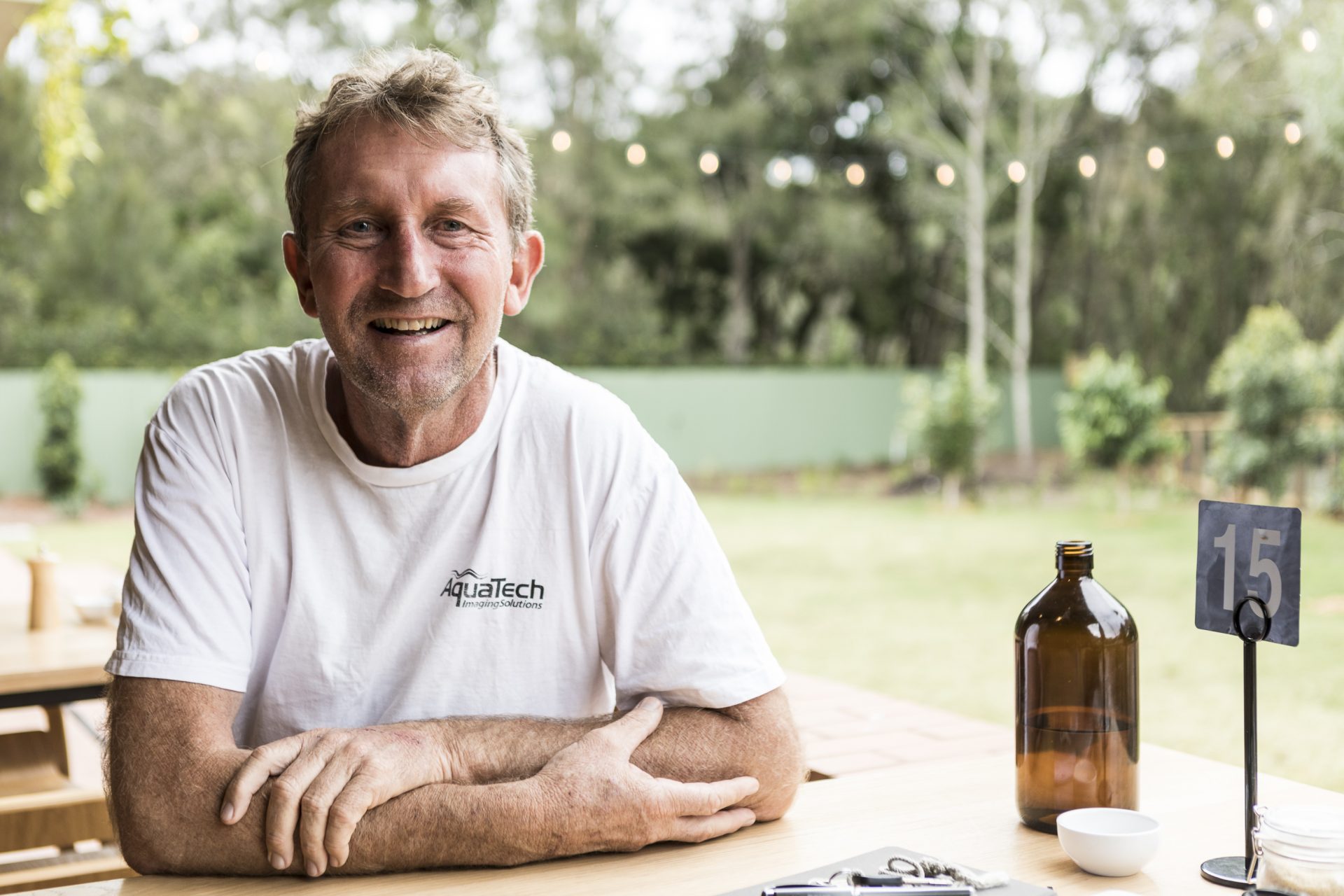 When I first picked up a camera and started pointing it at the ocean nearly 24 years ago, there was one photographer’s work that dazzled me, inspired me and daunted me. Australia’s Ted Grambeau was one of the absolute masters of capturing surfing in the best light. And his intrepid approach broke new ground for myriad others who would try to follow in his footsteps, traveling the world, living the dream.

For me, Grambeau’s work was always the forefront – the National Geographic of surfing photography. It was when I started and that hasn’t changed throughout my career. Today, in his sixties, his interpretation of light is still among the finest in the world. So getting to meet him properly for the first time while on the Gold Coast recently was tinged with nerves. He immediately put me at ease as we lamented the film days, joined the dots on shared friendships, outrageous surf sessions and the ebb and flow of emotions around releasing his latest coffee-table book: Adventures in Light.

“Like any photographer, having your work in print is an end-of-the-rainbow ambition,” he offers as he cradles his cup of coffee. “In this day of social media and photography being devalued with a three-second ‘like’, having them in an exhibition or in print gives much more credence to the images you’ve spent your life putting blood, sweat and tears into the process of creating.”

Ted has been living in Currumbin on the Gold Coast for 15 years, but is originally from Wonthaggi and Foster in Victoria.

“I studied at RMIT in Melbourne,” he recalls. “Then went nomadic for quite a few years. I used surf photography as a means to travel. I was on the search before it was even a campaign.”

“I’d bring my photos home to an emerging magazine in Queensland called Surfing Life and the owner of that, Peter Morrison, became like a best friend,” he smiles. “I started coming home to Queensland instead of coming home to Victoria. He made the mistake early on when he said, ‘you’ve always got a room at my place’.” I took that very literally and we’ve been best friends ever since. Peter’s success in the magazine industry is quite remarkable and we shared much of that journey together.”

I studied at RMIT in Melbourne. Then went nomadic for quite a few years. I used surf photography as a means to travel. I was on the search before it was even a campaign.

Adventures in Light is the prodigy of a lifetime of adventures and photography craft – and Ted’s second-ever photography book.

“I had a book published in America by The Surfer’s Journal called the Masters of Surf Photography. I’m not sure if that was because I had mastered the craft or I was just old,” he laughs. “Probably both.”

“With Adventures in Light I had this whole body of work and was looking for a theme that would encompass all of my photography – not just travel and surf, but my portraiture, fashion and all these different elements,” he explains. “One of my long-time clients, Rip Curl, have a marketing campaign called The Search and I married it to my life – literally being the search and not just for waves, but also the search for light. My company name is called Adventures in Light and so this latest book celebrates that.”

Ted first started shooting in the late ’70s and has documented a significant slice of Australian and global surf history ever since, but his eyes light up when he talks about the grittiness of that early surf discovery.

“My first book had a significant amount of my early adventures and I didn’t want to overlap the photos too much,” he admits. “So in this new book I pay tribute to the search and celebrate certain iconic trips. Surf travel is different these days – softer with boats, wi-fi, transfers from the airport and food cooked for them – that’s the adventure these days. Back then it was more core – hitchhiking, travelling overland, getting stuff stolen, getting shot at, having to deal with government authorities and robbers – you know, good times,” he smiles. “I wanted to celebrate that aspect and the book is filled with those stories.”

Back then it was more core – hitchhiking, travelling overland, getting stuff stolen, getting shot at, having to deal with government authorities and robbers – you know, good times. I wanted to celebrate that aspect and the book is filled with those stories.

He said each image stood on its own ability as a photographic image.

“It’s not always the surf image that wins the hero spot on a spread – it might be a pack of five dogs on a beach in Mexico for no other reason other than the fact that I think it is a beautiful shot photographically.”

Building a tome of this ilk is never an easy task, so Ted enlisted the help of friends to bring the book to fruition.

“I’ve been in the industry long enough to have a whole lot of good friends that are the best at what they do,” he explains. “I enlisted Tim Baker to do the words – he’s a good friend and one of the best writers on the planet. And another friend, Alastair Mitchell, who was the designer at Surfing Life and now runs his own successful design agency The Potting Shed, in the UK, had put his hand up years ago to design my book.”

He said he had favourite images from over the years that he knew he’d one day use. It took him 12 months to bring it all together.

“About half the images had already picked themselves,” he shares. “I was just waiting for the time to have the correct platform to highlight them. I had to go through a lot of slides – literally 10 filing cabinets of dusty transparencies and trying to timeline them and going through 10 passports to piece it all together,” he explains with a shake of his head.

“I didn’t want it to be directly a timeline,” he adds. “The story at the front of the book explains my timeline, but a lot of the surfing images are more current. In the past 10 years some of the biggest waves in the world have been surfed. And they weren’t in my previous book.”

He said the biggest challenge for his latest book was attracting people from outside the surf industry to pick it up.

“I’m well known in the surf industry, but I wanted to go beyond that,” he explains.

“I honestly think that surf photography has bred some of the most incredible photographers ever. There are not too many sports or lifestyles or genres where you are literally putting yourself in the face of near-death experiences to get that shot. You don’t run out on the footy field and shoot with a wide angle lens when the All Blacks are about to mow you down,” he laughs. “Surf photography is quite unique in that way.”

At 63, Ted has no qualms about his future.

“There is no retirement for me – I can’t afford to retire,” he laughs. “Surf and travel photography is definitely my passion, especially looking for new waves in places off the beaten track.”

He said he had projects in mind, but they needed to be reconciled with the new landscape that had changed the photography scene.

“The magazines are dying out, they’re being replaced by websites that are much more about delivering stories now – and then 10-minutes later it’s less-relevant. As a result there are less funds available for those types of projects now. There are bigger players with the companies getting involved, and again that is about instant stories wanted right now. There are aspects of my work that I need to develop and it’s about telling the story of actually doing the work – capturing that journey that is more important than the photo in the end. That’s probably where I will be going more in the future – taking people on my journey.”

“Almost always when I show people my work, whether it be in a book or an exhibition, the story behind the photo is the thing that intrigues them,” he shares. “People just love hearing how you got the shot – where were you, how did you get there, who stole what and why were they shooting at you or robbing you? And that’s indicative of life. It’s the journey that’s interesting and not where you are at any one time.”

Ted admits the marketing and selling of the book is new to him and hints that it’s not his favourite part of the publishing model.

“I have enough photos for plenty of books!” he laughs. “That is not the problem.”

People just love hearing how you got the shot – where were you, how did you get there, who stole what and why were they shooting at you or robbing you? And that’s indicative of life. It’s the journey that’s interesting and not where you are at any one time.

Dressed in jandals, shorts and a white Aquatech t-shirt, Ted’s eyes bear the pterygium’s that tell a story of a life spent staring at the sea. Each time he talks about a session or a new adventure, they light up like he’s seeing for the first time.

“With my book and my journey I have to give credit to my partner Selena for her input of being a perfectionist at all levels,” he smiles. “She has a design background and tidies up all my images in Photoshop – it is really handy to be surrounded by such talented people. The learning curve to produce a book is steep and it’s fraught with anxiety at every turn.”

Adventures in Light is available at Ted Grambeau’s website right here and at Rip Curl stores.