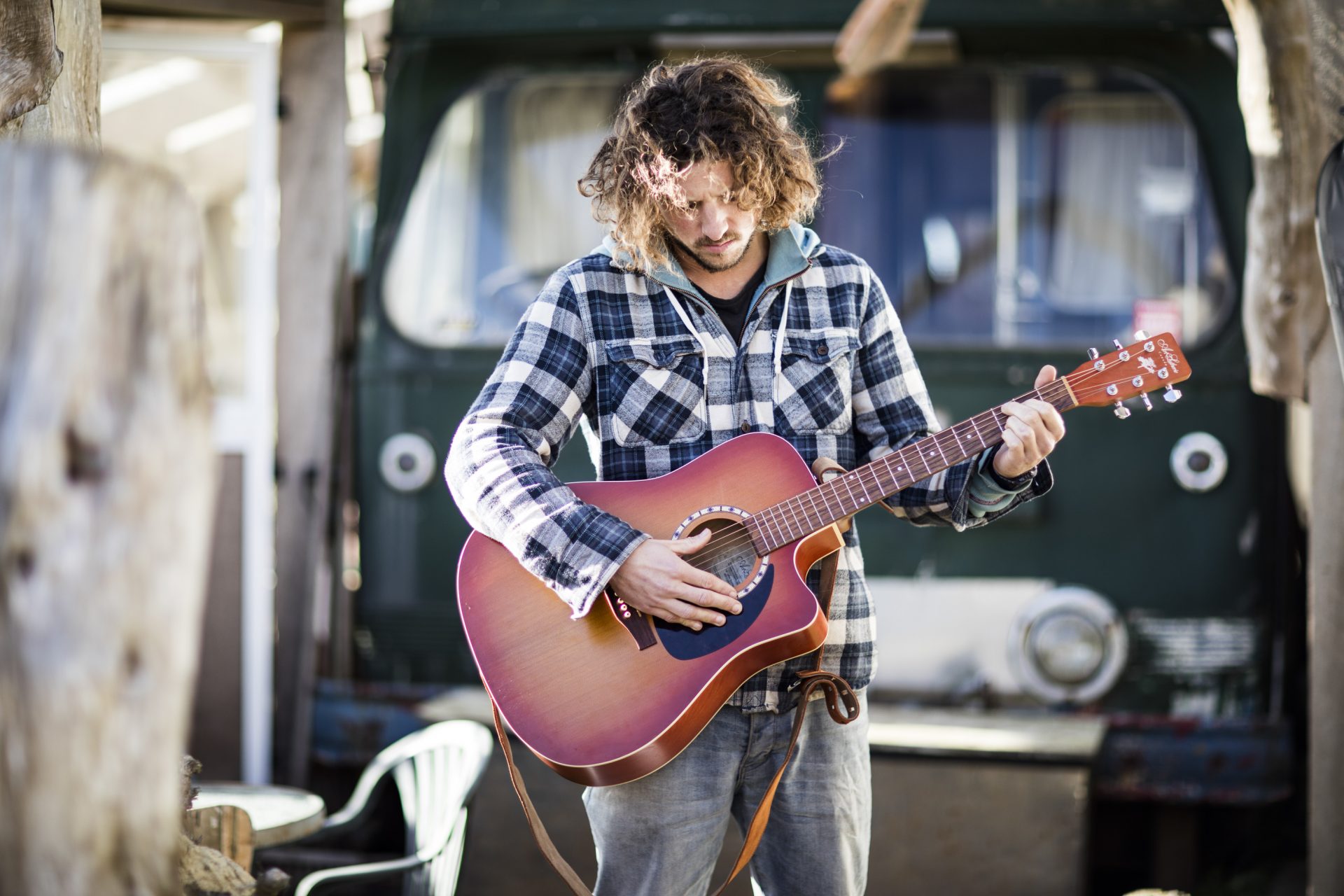 There’s something about the travelling artist: soul bared for all to see, a vulnerability that would challenge most humans and a sense of complete freedom. For 33-year-old Joe Wilson, that is the road map that lies before him.

Joe is a singer songwriter from North East Lincolnshire, just south of Yorkshire, on the north east coast of England – a place he describes as “industrial grit”. That’s a long stretch from the beaches of Dunedin where I met him. Joe, his partner Evie and their labrador Ziggy live, for the moment, in a bus above Whareakeake on the North Coast. It’s ramshackle, gritty, driftwood-infused and rustic. It’s warm, homely and smells like vegetable soup. Ziggy wags his tail and leans in for a sniff. He seems happy to have a visitor on a windy, grey day perched high above the bay.

Joe trained as a sports teacher and taught PE at a school in England until he had finally had enough.

“My friends were all getting married and settling down and I had done teaching as much as I wanted to,” he shares. “A friend of mine had set up a business or two and he was offering me a chance to set up with him – he had all these great opportunities. I couldn’t work out why I didn’t just say, ‘yeah’ and join him. Then he asked me what I really wanted to do. So I told him in my wildest dreams I’d like to be a singer songwriter and earn enough money to live off it. He just said, ‘right go and do it then’. And that was my decision right there.”

Almost two years ago, he bought the ticket to New Zealand and took his chance. It was only then that Joe realised he didn’t have any songs that he really liked yet.

“So I bought a travel-size guitar and went to Bali for a month on the way to New Zealand. In Bali I wrote a few things and then I got to Raglan and wrote about 30 songs over that year and a half,” he recalls. “I wrote songs that helped me make sense of what I had decided to do. I’m not a poet and I’m not really a writer, but for me writing anything with a nice melody leads to a mood and that mood is cathartic and the words kind of just tumble out. That’s happened a few times – it’s quite raw at first – and from that I start to craft it to make it work. It’s addictive. Everywhere I go I hear people like the lyrics, or identify with something in a song.”

Joe discovered his passion for music through his parents at an early age . “My Dad taught me to play the guitar – all melody based stuff.”

Joe’s journey in New Zealand first took him to Shippies, then The Mount and then Raglan. “I decided to stay in Raglan,” he recalls. “I had a van and I lived in that for the year to save money.”

It was in Raglan that he first met local surfer, surf shop worker and student, Evie Hall. After a short stint playing on the bar circuit in Byron Bay, he returned to Raglan and Evie.

“It just went really fast and we were together again,” he recalls. “Then Evie got accepted into Med School in Dunedin and we moved down at the start of the year.”

Ziggy tries his best to steal a fresh tree of brocolli from the bus’s kitchen. Evie apologises half-jokingly for Ziggy’s vegetarian villainy. She’s excited about her move south.

“I had never been to Dunedin, but everything I heard about it was great – the coast and the surf and all my friends said that they loved Dunedin, so I knew this was the right place for me and Joe and Ziggy,” she said.

Evie has spent seven years in tertiary study, slotting it alongside work commitments, and has completed, among other things, a Bachelor of Biological Science and a second major in Maori and Pacific Development. This is her first year in medicine. A chance encounter with Rod Rust in Raglan led her to the bus above the famous North Coast point.

“Rod came up for Craig Hughes’s funeral and I got to know him then,” she recalls. “Then when I came down we caught up with him. We had an offer in on a house and it fell through so we ended up moving into Rod’s bus.”

The heat of the wood burner belies the first cold change of the season raging outside the bus windows and makeshift conservatory. We strain to look through the rain and clouds to see if there is any swell. It’s not looking good.

“Surfing is becoming more a part of my life now – I didn’t grow up anywhere near surf,” admits Joe. “By my mid-20s a few of us would do the commute down to Cornwall from London – six hours driving on a Friday night and the surf would all be blown out and we’d go in anyway and then head to the pub. That was a surf – so it wasn’t really surfing,” he laughs.

A trip to Bali threw him in the deep end – what he described as “too much, too soon”.

“When I moved to New Zealand I tried to get back into it more and I love it, but I find it difficult – I like to do activities when I want to do them, but with surfing it’s dictated by the conditions,” he smiles. “I’m getting used to that. I’m always happy when I am out there. Being in nature is a big part of it – I even like looking back at the land from the sea – those perspectives are really nice.”

“The more I surf the more I want to surf – I want to get to that point where I can handle most situations – I am still shy in heavy surf or when it gets too big.”

Evie is a proficient surfer and a good coach.

“She is helping me. Although I am one of those people who can’t follow instructions at all – ironic given I was a PE teacher,” he laughs. “I have to work things out for myself – see it done and then do it. It’s the same with music. I can listen to a song and then play it. It works both ways, Evie is learning to play the guitar and she likes to know the details.”

In the fast-changing world of music Joe has been given lots of advice on how to navigate the path.

“My next step is to record my best songs and get them online. I need to get quality recordings and then push that through social media, radio and look for some gigs with established musicians. That for me will be the next big step,” he asserts. “I’ve found the Dunedin music scene is so supportive – everyone seems keen to help each other out.”

“If I was 23 then I could be more flippant about my career as a musician,” he concedes. “But I’m 33 and so I am driven by the fact that I have to do it now or miss the opportunity altogether.”

“If I don’t take it seriously then I am just messing everyone about. So I am putting a lot into it and focusing on doing it the right way. If it all works out okay then I will get Ziggy and Evie in the van and tour around the country. We’ll start this bus right up and drive right outta here,” he laughs.

It’s always a privilege to meet an artist on the verge of greatness. Have a listen. Joe Wilson deserves a spot in your life’s soundtrack.