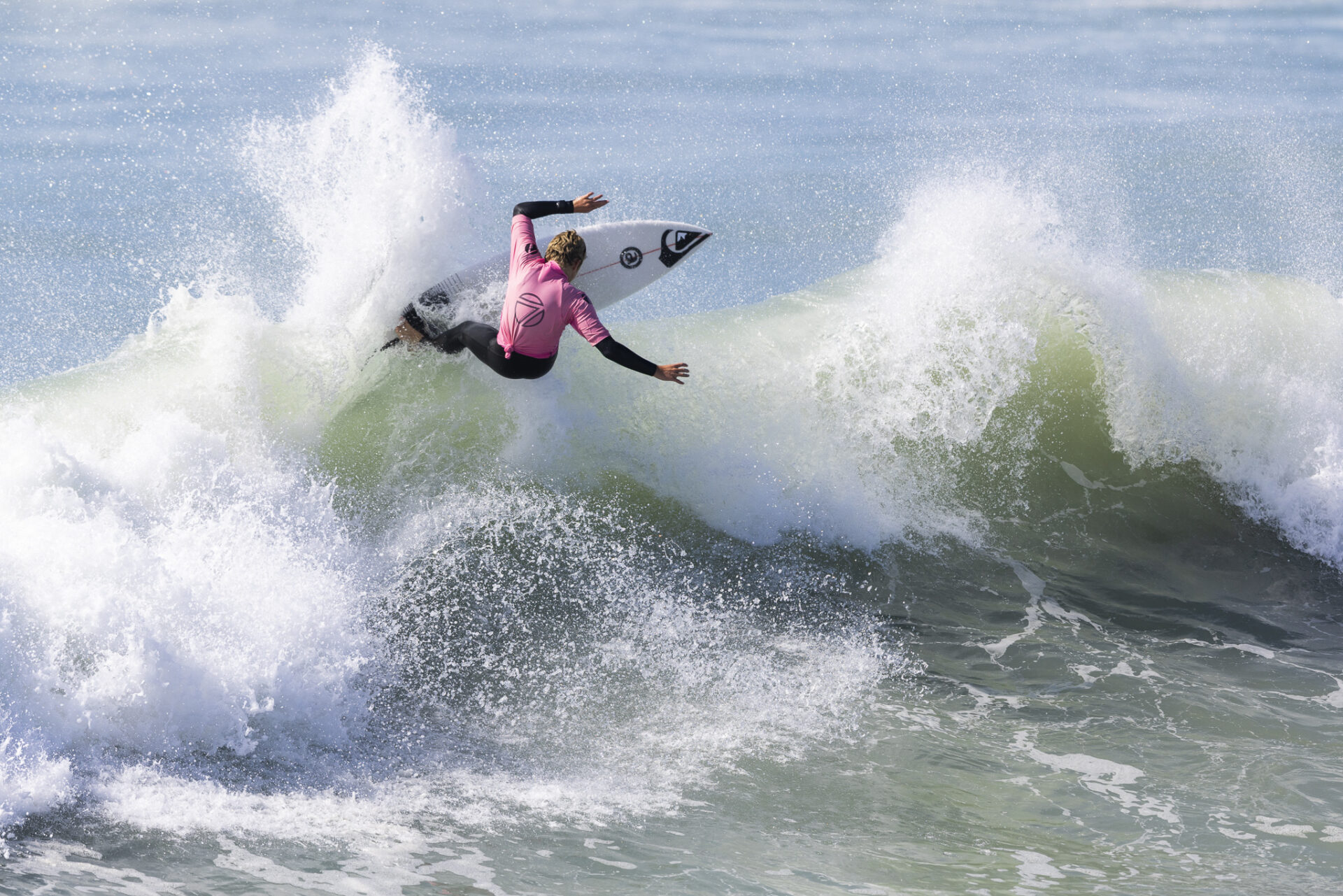 Combined with the best surfers from the South Island this set the stage for an impressive event.

Day 1: New Brighton Turns It On For the Under 18s

Competitors were greeted with clean 3-4ft pumping offshore surf to open the event on Friday, March 25. With the forecast predicting a swell of over two metres there were some concerns over how manageable the surf would be, but luckily for everyone involved the swell was not quite as big as predicted and was cleaned by a consistent offshore breeze. The rip under the pier proved to be the grom’s best friend when paddling out.

The first boys’ quarterfinal was an absolute cracker with all North Island surfers. Tao and Will found the best waves too narrowly defeat Kalani, who’s best wave was unfortunately just after the buzzer. Rakiatea Tau was the standout surfer of the boy’s quarterfinals using the rip bowls into the pier to showcase some critical turns to post the best heat total of the day, an impressive 16.33.

With the tide now dropping out and the swell starting to pulse with 5ft clean up sets, conditions became difficult for the semi-finals. The girls favoured the right-hand rip bowl and both heats were closely contested with Rewa and Sari progressing from the first and Amelie and Misha from the second.

The boys’ first semi was a very close affair with just over a point separating all four surfers, Will taking the win over Tao to see them both advance. Tyler Perry and Jack Tyro made it through a second closely contested semi.

Misha got off to a great start in the girls final banking a good score with some sharp forehand rail work, Rewa replied attacking the lip to take a slim lead, before Sari chimed in with some great backhand surfing to open her account. But Misha took control on a good righthander scoring the highest wave of the final to take a well-deserved win and holding off a charging Rewa and a fast finishing Amelie.

Tactics played a big part in the boys’ final. With the tide dropping and the swell pulsing the decision was either gamble out back on the increasingly straight and shifty outside bombs or surf the fun inside rip bowl. Tyler and Will opting for the reliable rip bowl, while Jack and Tao rolled the dice on the outside. The boys on the inside immediately started getting busy, with Will posting the best early score. Jack managed to find a mid-sized wave and posted a decent score, then moved to the inside for a quick back-up. Tyler posted a couple of decent scores on his backhand, but the heat was blown wide open when Tao took off on a well overhead righthander, laid down two big backhand turns that equated to a near excellent score. It was game on. Will and Jack both posted good back-up scores, but Tao managed to find another set wave to add a good back up before breaking his leash and having to swim in. Luckily dad/caddy, Nathan, was on hand to wade into the shore break and throw him a back-up board. Unfortunately, there was not enough time left for the others to respond, leaving Tao with the victory, Jack in second, Will third, and Tyler fourth.

Day 2: The Under 16s Get Their Turn At Brighton

Light offshore winds and clean waves greeted the Under 16 divisions on Saturday morning. Low tide and big clean-up sets made conditions tricky for the first few rounds of the day, with the right-hand rip bowl into the pier being the go-to option for everyone. This did lead to some carnage with Pipiata Ritchie suffering a cut foot after slamming into the pier and Beau Woods snapping a board finishing a turn on one of the pillars.

Lucy Macefield and Ryder Townsend were the pick of the surfers in the trial heats comfortably advancing into the main draw. Tao Mouldey started where he left off from yesterday posting some impressive scores. Other first round standouts included Taj Dal Bosco, Beau Woods, Alexis Owen, Tava Santorik and Rakiatea Tau in the boys’ division. Poppy Entwisle, Misha Peyroux and Rewa Morrison looked to be the surfers to beat in the girl’s division.

An early decision was made to hold off on running the finals until Sunday, so the day ended with some high-quality surfing in both divisions as competitors vied for places in the finals. The pier jump was the most fun and easiest way to get out back so most competitors took this option.

The first girl’s semi-final was wide open until the last five minutes when Misha rode out of a solid forehand re-entry to take control of the heat. Lucy Macefield then found an open face right on the buzzer to jump ahead of Sari Ayson and claim a finals spot. Poppy Entwisle posted the first good score of the second semi-final with some solid backhand surfing. Rewa and Tessa traded some mid-range scores before Poppy shut the door with a solid back-up wave. Rewa manged to get the better of her good friend to claim the second finals spot.

Tao continued his domination of the event in the first semi-final posting the highest heat score of the day, the battle for second was close with Beau Woods claiming the spot over Taj. The second semi turned out to be the heat of the day with all four surfers posting great scores, trading wave for wave, turn for turn, when the dust settled Jack Tyro emerged on top, with Rakiatea Tau leaving it late to just pip Alexis Owen and Tava Santorik for second place.

Day 3: Still Pumping For The Under 14s and Under 16 Finals

The Connect Group must have cast some magic over the South Island Grom Series as it entered into its third day of pumping offshore surf conditions. The swell was regarded as one of the best swells to hit Christchurch in sometime and it continued to provide some of the country’s best groms with the opportunity to showcase their surfing.

Before competition started organisers observed a one-minute silence out of respect to the friends and family of Jamie Civil who had tragically passed away the previous day while surfing huge Aramoana.

Today it was the Under 14s turn, with the boys up first, standouts in the first few rounds included, Alexis Owen, Sam Frazerhurst, and Remy Sale for the boys. Poppy Entwisle set the pace for the girls posting the highest heat score of the day in the opening round, Amelie Clarke and Tessa Gabbott were hot on her heels and surfing very well.

Unfortunately, the easterly winds got up for the semi-finals. Conditions were still very rippable and the swell continued to pulse much more than expected. Sonny Lyons edged Sam Frazerhurst in a very close first semi-final, both surfers progressing ahead of Jack Higgins, who was unable to find a backup wave. In somewhat of an upset Jesse Frazerhurst and Remy Sale just managed to edge out national champ Alexis Owen to advance.

The Under 14 final was very closely contested with all the boys ripping, many waves were traded into the pier. In the end Jesse took out a very close final narrowly defeating Remy and Sam with a wave starved Sonny just behind in fourth.

Tessa Gabbott got off to a great start in the girls’ Under 14 final, but Poppy and Amelie both responded with good scores. Amelie found another quick keeper, but Poppy found the wave of the heat to take out the final with Amelie second, Tessa third and Tessa Langman in fourth.

The Under 16 girls’ final was next. After a slow first half the heat came to life. Misha Peyroux posted the best early score, with Rewa Morrison close behind. Poppy caught a left to post her first meaningful score, but Misha countered with a great righthander to take the lead. In the last few minutes Poppy took off on a right with a two turn combination just providing the score required to take the lead.

The Under 16 boys was very close with conditions deteriorating. Tao set the pace early finding a good long left. Rakiatea Tau responded with a good righthander into the pier. Beau Woods also got going early surfing well. Tao got a solid back up wave to finish ahead of Rakiatea and a fast finishing Jack Tyro. Beau had to settle for fourth.

The next stop on the SISA South Island Grom Series is Kaikoura April 2-3, 2022.