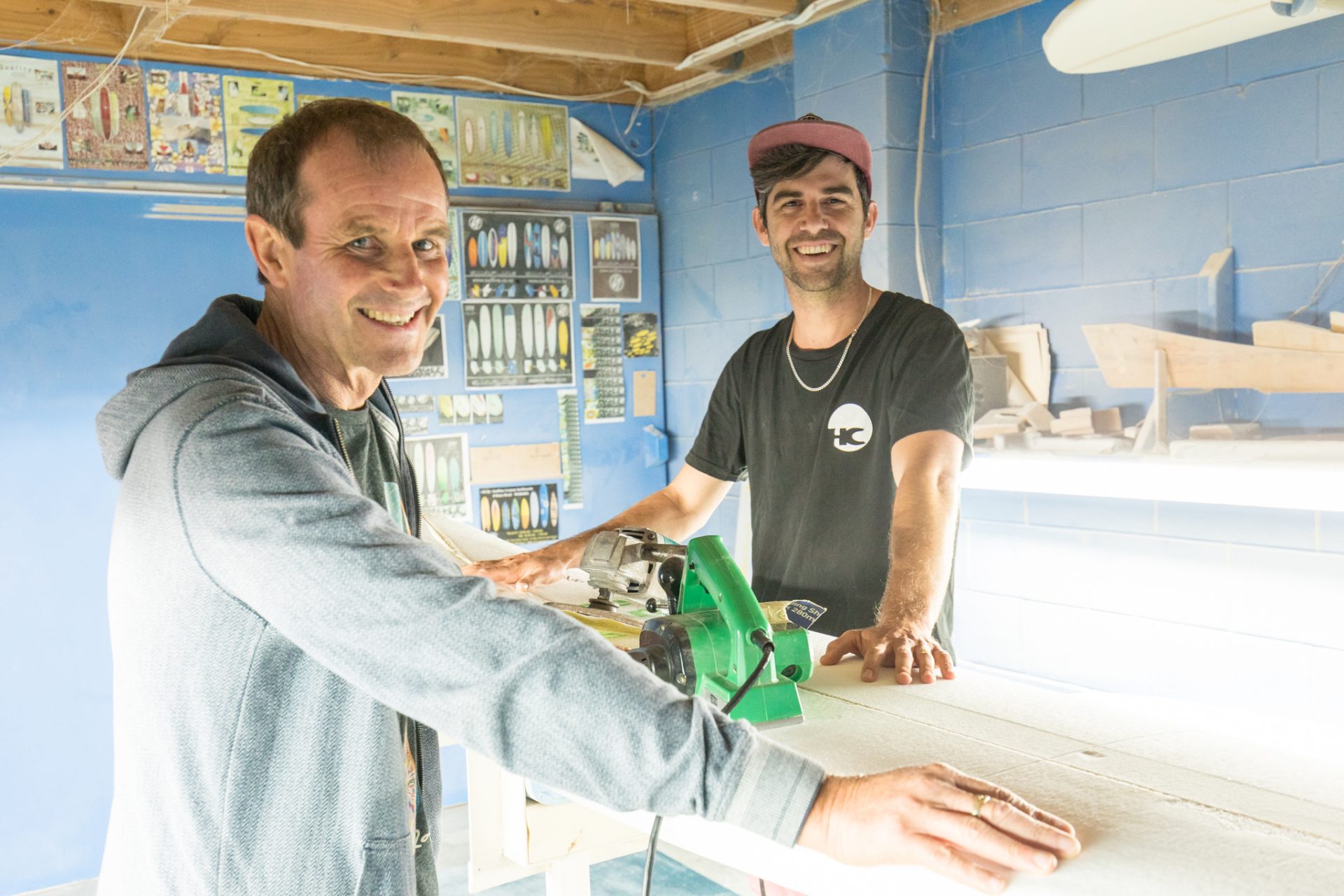 HC Surfboards shaper Hayden Chamberlain has moved his operation north to Ruakaka and into Roger Hall’s Surfline surfboard factory. It’s a mutual relationship that should see both brands benefit. But surf photojournalist Craig Levers thinks he just may be the one missing out.

A couple of months ago West Auckland shaper Hayden Chamberlain asked me what I thought about him moving up to Ruakaka. My first reaction was selfish. You can’t do that! Where am I going to get boards from? We are, well, were neighbours in the same Piha Road, which has a large amount of surfing families dotted along it.

I was there when Hayden’s parents dropped him off at the Fresh Squeezed Factory, Shadee Lane, Piha (and, yes, that’s a real name) to start his shaping apprenticeship when he was 16. We’ve been mates ever since. I’ve interviewed him and stitched him up with terrible portraits since the beginning. He’s part of the Piha fabric and his HC Surfboards brand is well-regarded. 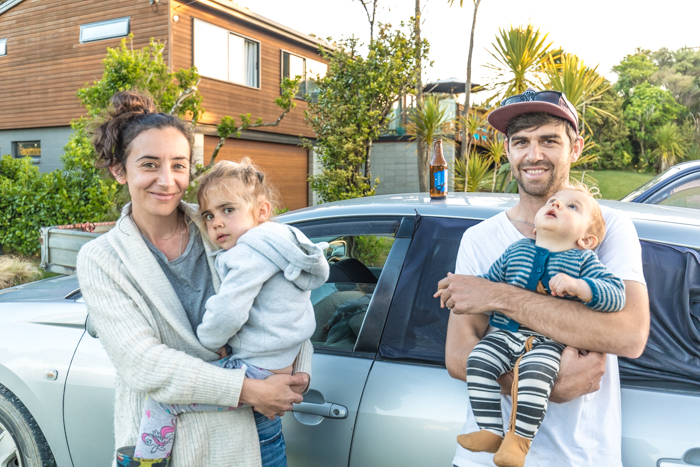 Soph, Hayden and the kids during the big pack … Photo: CPL

Declarations become reasoning: why, why would you leave us?

“Family, bro. Both Soph’s and my olds are still in Dargaville and we want the kids to be nearer to their grandparents.”

We talked it out. The concern of leaving his client base in West Auckland for the more sparsely populated fields of Northland. Of leaving swell rich Westside to the swell challenged East. I appreciated that Hayden valued my opinion. But, in my books, whanau always trumps the pros and cons. I knew he was going even if he and Soph thought they were still on the fence at that stage.

“Well, it’s a win, win situation I think,” offers Roger unapologetically. “Hayden joins us here at Surfline and that brings us back up to four, which seems to be the best working model for us. Over the last few years it has been difficult to get skilled workers. So Hayden’s coming in with his vast set of skills to help build the boards that I do. And he’s already pushed ahead and trained up Bryce Barton from Piha to do the glassing.”

Hayden is taking the whole HC Surfboards operation north with him.

I ask Hayden if he’s worried that the HC Surfboards brand could just get assimilated into the Surfline operation.

“No, I don’t think that will happen,” offers Hayden. “Not at all, if that was a worry I would not have done it to be honest. I’ve spent a lot of years building up my brand and I don’t want to get it just pushed to the wayside.”

Roger is quick to step in to add his voice.

“That’s certainly not what I meant either,” he explains. “I am excited about having Hayden in the factory helping with my boards. But in reality that’s a by-product of him being here. As far as the general public are concerned there will be two distinct brands coming out of this factory.”

“With Hayden being younger and me being, ummm, err, older, He’ll be looking to grow his business while I’m wanting to concentrate more on my shaping and spending more time in the shaping bay. Having Hayden here building the boards allows me to do that.”

With two shapers coming together you have to wonder if egos will come into play – will there be fights over shaping bay time?

“I’m looking forward to it – seeing how Hayden does it,” smiles Roger. “I’m sure he’ll be interested in seeing how I approach it. And vice versa – I don’t think there are any egos involved. I think we’re both going to have a good time doing what we are both passionate about.”

“I’m really keen to learn new tricks, because Roger is a wealth of knowledge. I’m a bit of a sponge and I’m always keen to learn some new stuff.”

I’m sure he’ll be interested in seeing how I approach it. And vice versa – I don’t think there are any egos involved. I think we’re both going to have a good time doing what we are both passionate about.

“We’ve both evolved quite separately to each other,” offers Roger. “The types of boards I do and the customers I do them for … and Hayden’s doing some quite different stuff. And I don’t really go to the places Hayden goes.”

“Yeah, we’ve got two totally different markets, which I think is a healthy thing,” adds Hayden.

Hayden admitted his biggest concern was leaving his Auckland client base.

“That was a huge concern,” he admits. “But just over the past few weeks, as people have found out, it has become clear they are not that fazed about me leaving. That has been encouraging. The performance market is a big market and there are a lot of players in that. I’m actually quite happy to be out of that big frying pan of Auckland and can distance myself from that competitiveness. I think the loyal ones will follow me and for those that don’t, well, I’ll pick up new ones.”

The performance market is a big market and there are a lot of players in that. I’m actually quite happy to be out of that big frying pan of Auckland and can distance myself from that competitiveness. I think the loyal ones will follow me and for those that don’t, well, I’ll pick up new ones.

Roger is quick to point out that geographically Hayden isn’t moving that far.

Roger and his Surfline brand has always had a very national presence to it. He’s always had customers stretching the length of the country from the Far North to strongholds in Otago and Canterbury.

“Interestingly, when I get out and about, it doesn’t seem to matter where I go, there will almost certainly be an HC board there,” smiles Roger. “So your boards are far and wide as well. So that will continue.”

“I think it will help me concentrate on being better at marketing,” considers Hayden. “Rather than just worrying about that little nook I had out in West Auckland.”

“The isolation actually works for you if you use it,” adds Roger. “Like you go, ‘okay, I need to let people see what I’m doing’, so you have to become more active in that.”

It doesn’t take long for the rumour mill to crank into gear and whispers of the HC and Surfline connection soon started to flood in.

“I think it’s fair to assume that there ended up being a bit of disinformation and confusion about what we are doing,” explains Roger. “But really what we are doing is carrying on as we were, we are just doing it under one roof. Hayden’s not changing anything he’s doing except for where he’s doing it. And I’m not changing a whole lot apart from the fact that Hayden’s now here bolstering the numbers back to that fourth man needed to work the factory.”

Roger said he had heard rumours that Hayden was taking over the factory and that he was retiring.

“That’s not what is happening.”

Hayden sums it up well: “The thing is I’m only 90 minutes up the road or a phone call away.”

I’ve been counseled by the shapers and feel better for it. I order my new summer board and by doing so get bragging rights on being Hayden’s first order under the new roof. Everything is going to be okay. But as I leave the factory in Ruakaka there is the realisation that while I haven’t lost my shaper, I have still lost my neighbours and the T Double A Surf Team is a strong member down. Damn you, Roger and your rational reasoning mind!

This Is Te Kehukehu: A Short Film By...