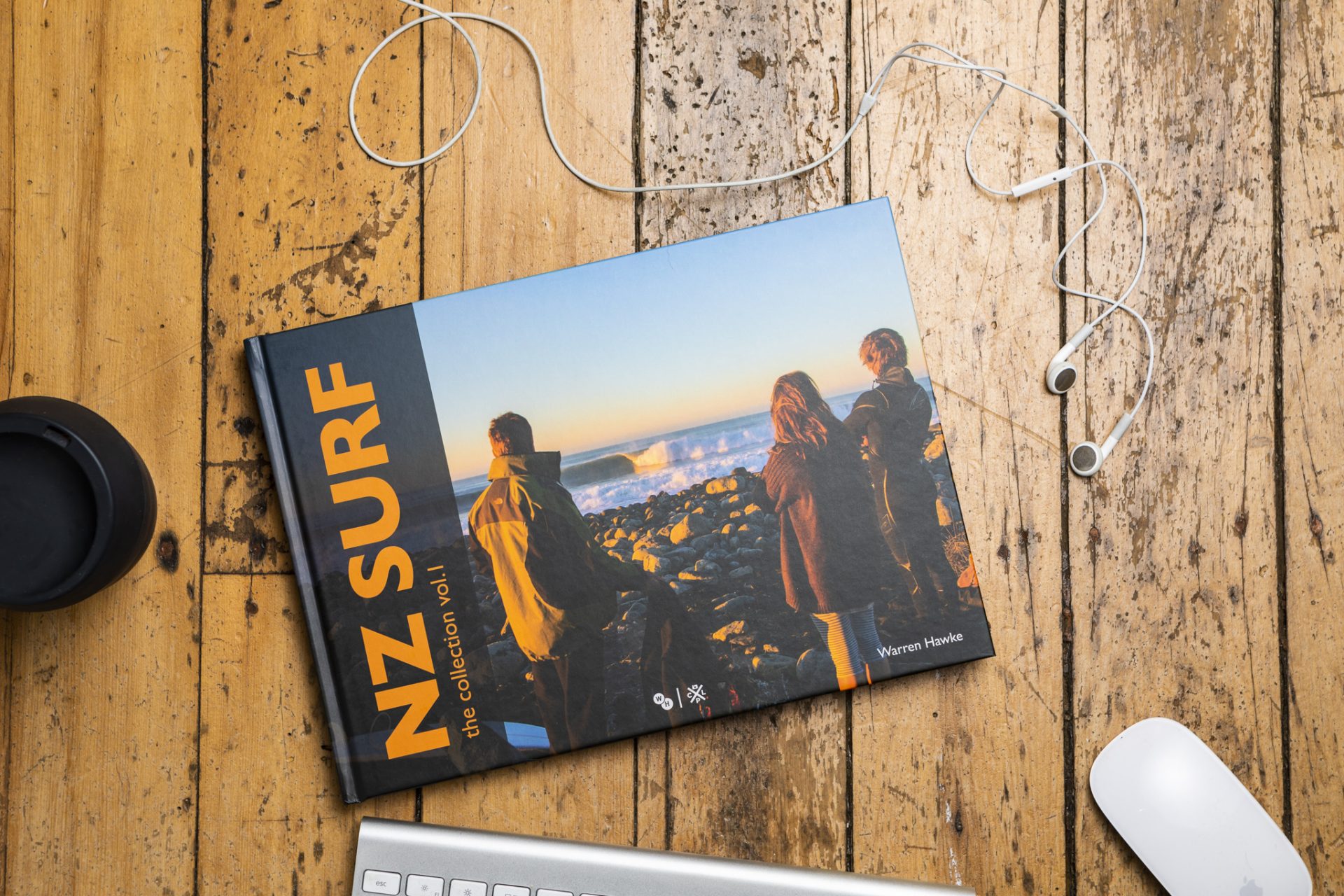 From discussions with artistic souls, cross-stepping wave sliders, neck-tattooed lip-launchers and salty old sea dogs there’s something for everyone in NZ Surf: The Collection Vol.1. Drawing from a range of historical and recent material, and from a variety of contributors, this volume directed by Warren Hawke, is an open-hearted sweep through the richly diverse scene that is surfing in New Zealand.

For the “frothers” there’s plenty to get lit up about, too. We’re given candid access to West Coaster Jai Earnshaw’s turbulent trajectory from the ranks of sponsored wunderkind to Outback Mining in Australia. Here the writing transcends the sanitised sponsor pleasing “brochure” spiels that, at times, hamper surfer profiles.

Warren Hawke lays it out bare: “It’s just that somewhere between the devil and the deep blue sea, the twin weights of temptation and expectation have seen him fail to make the most of his amazing talents.”

It’s just that somewhere between the devil and the deep blue sea, the twin weights of temptation and expectation have seen him fail to make the most of his amazing talents.

Such honesty, elevates these stories and follows through with Warren’s promise to provide an absence of “corporate bullshit”. Who wants to hear the same old riffs about only surfers “knowing the feeling” (cringe, barf, throw the book against the wall)?

The boys get the elbow in places and we get a soulful shot of Nina Young at the Single Fin Mingle and barrel-hound Ella Williams beaming from inside a Piha pit. It’s great to see that Warren clearly references the rise of women ripping throughout New Zealand.

It’s a publication that wouldn’t have been possible a few decades ago as surfing has evolved from, at times, a stultifying tunnel vision. In the past there was a narrow definition on what “real” surfing was and who the “real” surfers were. Roger Hall in a story titled, “Humble Pie” feels vindicated. He was a man criticised for imagining a more diverse culture. He states, “Human nature is that we all tend to use pigeon holes … but over the years it has really opened up. It’s a wonderful time”.

Hall’s attitude seems to echo throughout the collection. Organised around eight chapters or groupings with names like, “The Vault” and “The Tribe” we’re given a range of vantage points from which to view an activity that defies categorisation. This is a commendable approach and speaks volumes for the minds involved.

It feels like the work of those who know what it feels like to wake up with sand in their sleeping bags, frozen wetsuits on the line and smoke in their hair. Respect and space is given to those who’ve remained committed to the sport and committed to New Zealand’s wild and woolly fringes.

Surfing has ruined the life I was destined to have and I hold Logan Murray and Warren Hawke partly responsible. Gentlemen, from the bottom of my heart – thank-you.

In “Keepers of the Forgotten Hours” we connect with the hearty idealists refusing to allow bosses, mortgages and the daily grind to separate them from their surfing lives. Bryce Wilson’s words and images centre on muscling through the sleepy dawn, waking in “the void between night and day, hours that are forgotten to most people”. These particular pages are awash with golden-tinged wave faces and misty green pastures. Wilson concludes, despite the water that feels a bit dark, “it all becomes trivial as these people are deeply in-tune individuals”.

Finally, Page 103 is my reminder of why I don’t move to the Sunshine Coast and grow a pot-belly. It’s a shot that sent me blundering into the Catlins surf in the early ’90s to freeze my bits off with a single-finned Bob Davies and a shorty wetsuit. Logan Murray’s world famous “Wetsuits on the tree” encapsulates the unique flavour that is surfing in New Zealand. It’s the colour. That milky, cyan-green wave face with a faint hiss of an offshore breeze, raggedy gorse in the foreground. Phew … truly magical New Zealand surf.

To state the obvious, but nevertheless it must be said, that without the commitment to document such beauty we wouldn’t have these amazing shots. Those artistic souls that pay this much attention must be celebrated.

Surfing has ruined the life I was destined to have and I hold Logan Murray and Warren Hawke partly responsible. Gentlemen, from the bottom of my heart – thank-you. 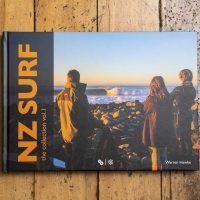 Price: $60
Book Title : NZ Surf: The Collection Vol. 1
Book Author : Warren Hawke
Book Format : Hardcover
Date published : October 25, 2017
ISBN : 9780473405076
Number Of Pages : 192
Book Description : NZ Surf: The Collection is a coffee table style book featuring over 500 photos but with a backbone of well-written stories. It is a surfing book that any Kiwi who has ever set foot on fibreglass will identify with.

A beautiful and untainted collection of New Zealand surf culture – there’s something for everyone in NZ Surf: The Collection Vol.1. This volume, directed by Warren Hawke, draws on a range of historical and recent material, and from a variety of contributors, to paint an open-hearted portrait of our culture. Published by PhotoCPL, this edition has sold through, and the small stocks left on the shelves at selected surf shops are your last chance to own this tome.