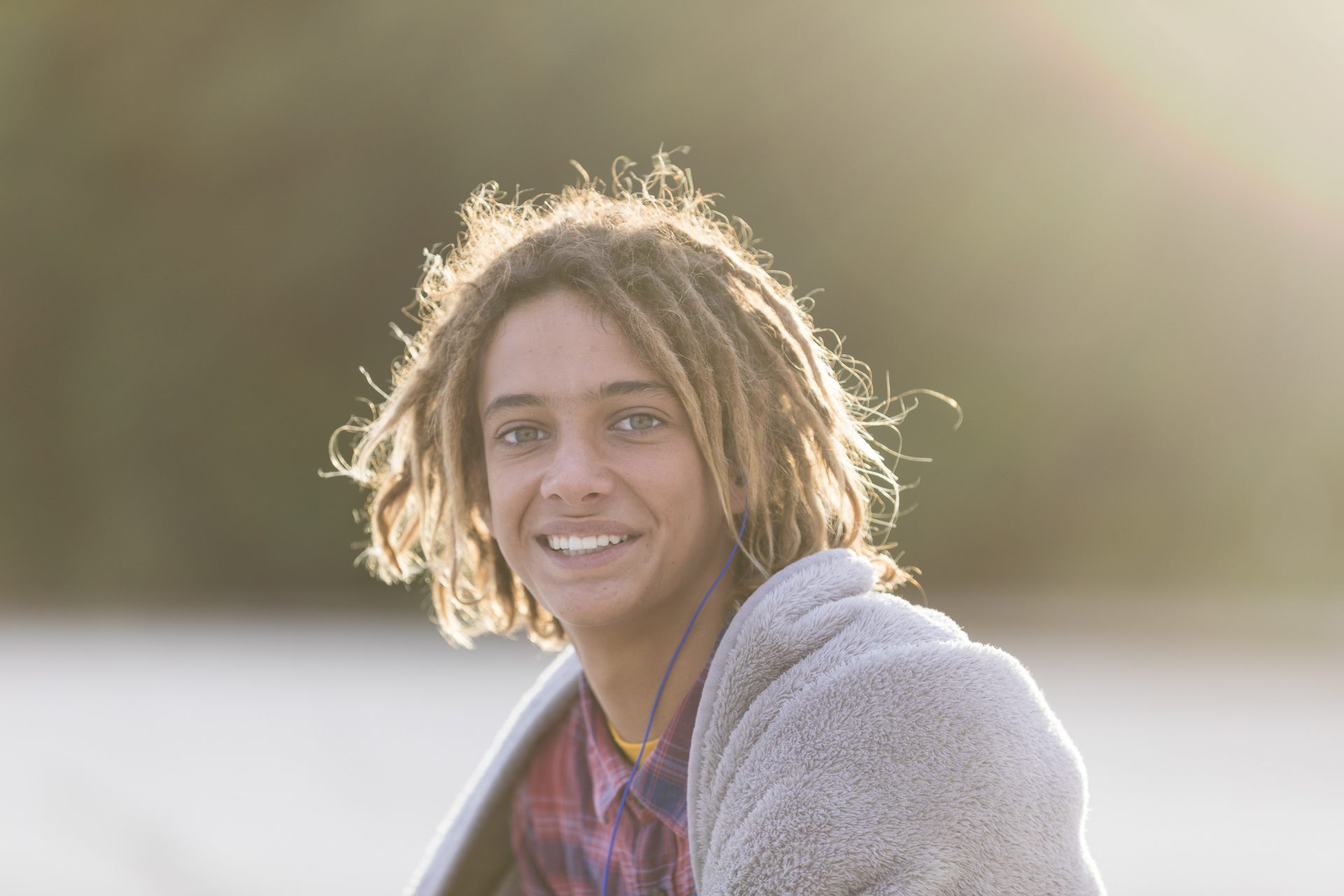 There is no question that the Gold Coast of Australia has become the hotbed of surf talent in the Southern Hemisphere. It has such a concentration of talent that when one of its fabled sandy points break, no waves go unridden and the menu is barrels, airs and fully buried rails. The old boys rip, the kids are fearless, there are girls everywhere surfing like they’re on the Championship Tour (some are) and more and more Kiwis are realising that the Goldie is an accelerated pathway to a surfing career.

We spent a week with Kaya Horne. He spends his time between Mount Maunganui, where his Mum lives, and the Gold Coast, where his Dad is based. Mostly he’s on the Gold Coast and at a school that starts most days with a sunrise surf session. His coach will be there and a collection of the best surfers around his age all trying to one-up each other. Kaya is in his element.

“I’ve been living here coming up eight years,” he shares. “It is pretty good and usually has a few more waves than the Bay.”

Kaya joined the Burleigh Boardriders as soon as he moved across the Tasman.

“They’re super welcoming and have quite a few New Zealand surfers under them now,” he explains. “They support me really well.”

“The boardriders is a big thing over here – it’s a real team environment and everyone tries to help each other out. You have a crew to push you and they’re just really focused on the younger surfers – they set up training and run camps for us. No matter how old or how young you are, they’re just a very welcoming club.”

He said even though it was an Australian boardriders club, they always helped the Kiwis and supported him in all the comps.

“We had an Anzac comp on Anzac Day,” he smiles. “We have so many New Zealanders in the club, so it was Australia vs New Zealand and out of the seven years doing it, this was the first time we won. We got it! Everyone was pretty stoked and the adults all had a good time at the pub afterward. It was cool to see the older guys getting into it. Ian Byrne was the captain of our team. He’s always doing stuff around the club, and he’s a really cool dude, but he never throws himself into a situation like this, so he was elected and brought it home for New Zealand.”

Kaya said the concentration of talent on the 42km span of sand and headlands that stretches from Straddie to D Bah was a direct correlation to the amount of people living there, but said it was another Kiwi, Kehu Butler, who kept him on his toes.

“I’ve been cruising and surfing with Kehu whenever he is over and that has been really helpful for me,” admits Kaya. “He really pushes me. We’ve been surfing against each other since we were four when we started – he’s my older cousin so that pushes me a bit more.”

I ask him if Kehu pushes him into waves outside his comfort zone? His response is emphatic.

“No, there’s nothing that I don’t want to go on out there,” he defends. “If he’ll go then I know I should go as well – that factor of having him as my older cousin leading the way fuels my desire to get there also.”

Kaya said he learnt a lot from Kehu and not just in the surf.

“Watching him train and training with him and to then see him do well in the comps as a result, that motivates me,” he shares. “A lot of his training is not in the surf. He trains fitness and conditioning three or four times a week and those sessions are pretty intense. And then he surfs every day as well.”

Kaya also employs a coach to help guide his progress.

“Clayton has been a massive help – he coaches my school now as well so I see him every Monday and Tuesday morning and then if I need something else he is always there to help out.”

Watching Kehu train and training with him and to then see him do well in the comps as a result, that motivates me. A lot of his training is not in the surf. He trains fitness and conditioning three or four times a week and those sessions are pretty intense.

Also in Kaya’s corner is his dad, Rhys, who was a top-ranked rugby player.

“He did pretty good in rugby union – he played in France and Ireland and he is a big driving force in my surfing career and life,” explains Kaya. “He always helps out and can pinpoint things I need to work on or improve upon.”

For 2018 Kaya has mostly withdrawn from competitions to build his base and tackle issues that most 17-year-olds face: massive growth spurts.

“I’m focusing on the training and doing less comps to get back into the competitive mindset,” he explains. “I’m just working to improve different aspects of my surfing to get to where I need to be to be competitive on the Pro Juniors next year.”

“Growing was pretty challenging,” he admits. “My boards went from being 5’3” to being 5’8” within a matter of three months. It’s a big change in a short amount of time, which is hard, but everyone has to go through that. I’ve just had to figure things out myself, relearn a few things and find a way to get through it.”

“Next year is my last year in Juniors so I will be focusing on the Pro Juniors and working towards a couple of the QS events to get a ranking,” he offers. “I just have to keep training and building towards that.”

I ask Kaya if he thinks other aspiring Kiwi surf athletes should be considering a second base on the Gold Coast.

“I think it depends on where you live,” he shares. “You can get some pretty pumping waves in New Zealand, but the Gold Coast is good in terms of the level of surfing over here. You get pushed pretty hard – there are a lot of very good surfers here. It’s easy to find people who will push you … and it’s not as cold.”

“I’ve been surfing the beachies a lot lately, but my favourite wave is Burleigh Point and Straddie when it is on, which is a lot … and it’s always a bit bigger than everywhere else – it’s kind of like a Dbah of the north end of Gold Coast.”

“I quite like Sharkies,” he adds, “which is deep on Burleigh Point and when that is breaking it is very slabby. When Straddie is bigger the lips are about as thick as they are tall – it can get very heavy also.”

My boards went from being 5’3” to being 5’8” within a matter of three months. It’s a big change in a short amount of time, which is hard, but everyone has to go through that.

Alongside the Burleigh Boardriders, Kaya’s laidback charm, charisma and raw talent also attracted sponsors. He has been with Billabong since he arrived and is also backed by Liive and Far King, while Lowen88 provides his boards and 3D Fins his fins.

“Lowen has always been there for me and has always helped out with my boards and especially with my growth spurt, trying to figure out the litreage, length and width to keep pace with me,” he shakes his head and stretches his long arms.   “My sponsors give me a lot of opportunities that I wouldn’t have had without them.”

One sponsor that Kaya supports is one very close to his heart: Livin.

“Livin is something that I personally like what they are trying to promote: awareness of depression and suicide,” he explains. “I support them fully just with everyday life and things that have happened within my family as well. I know the effects of what that can have on the person and also the family members as well.”

We zig and zag around the Gold Coast and shoot up into Byron Bay in NSW in search of waves, but end up back on the Gold Coast. Kaya is home it seems and this isn’t a bad place to call home. 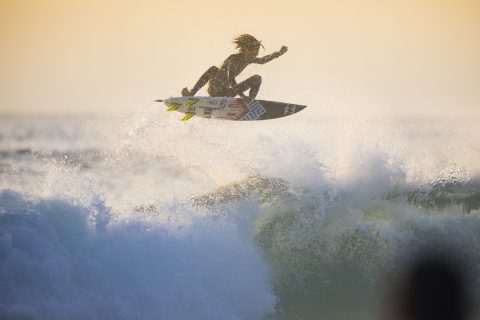 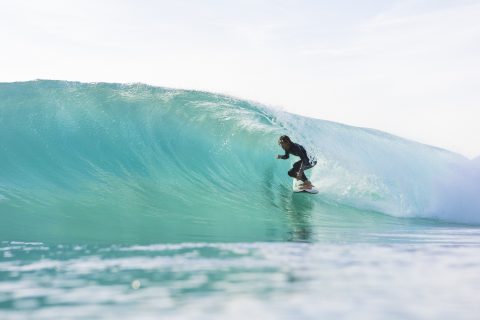 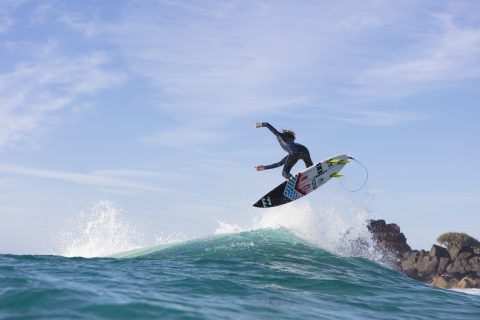 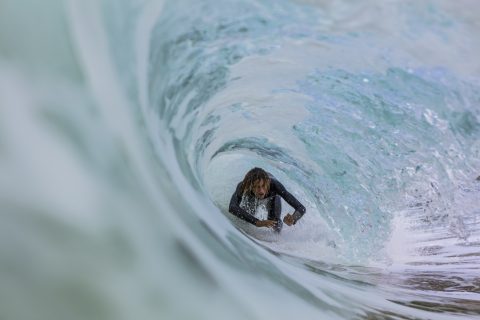 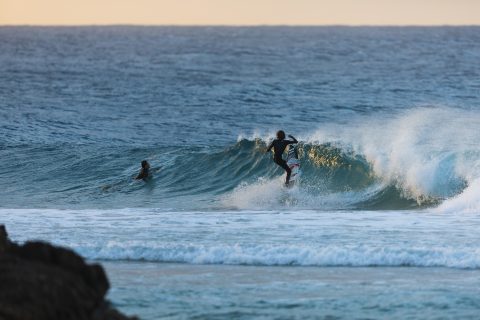 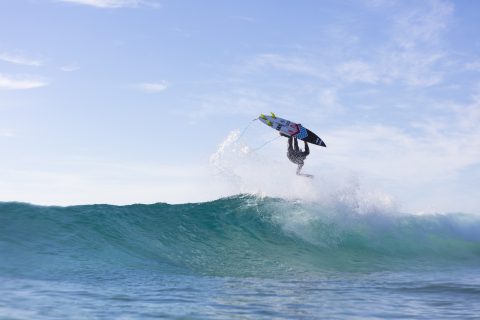