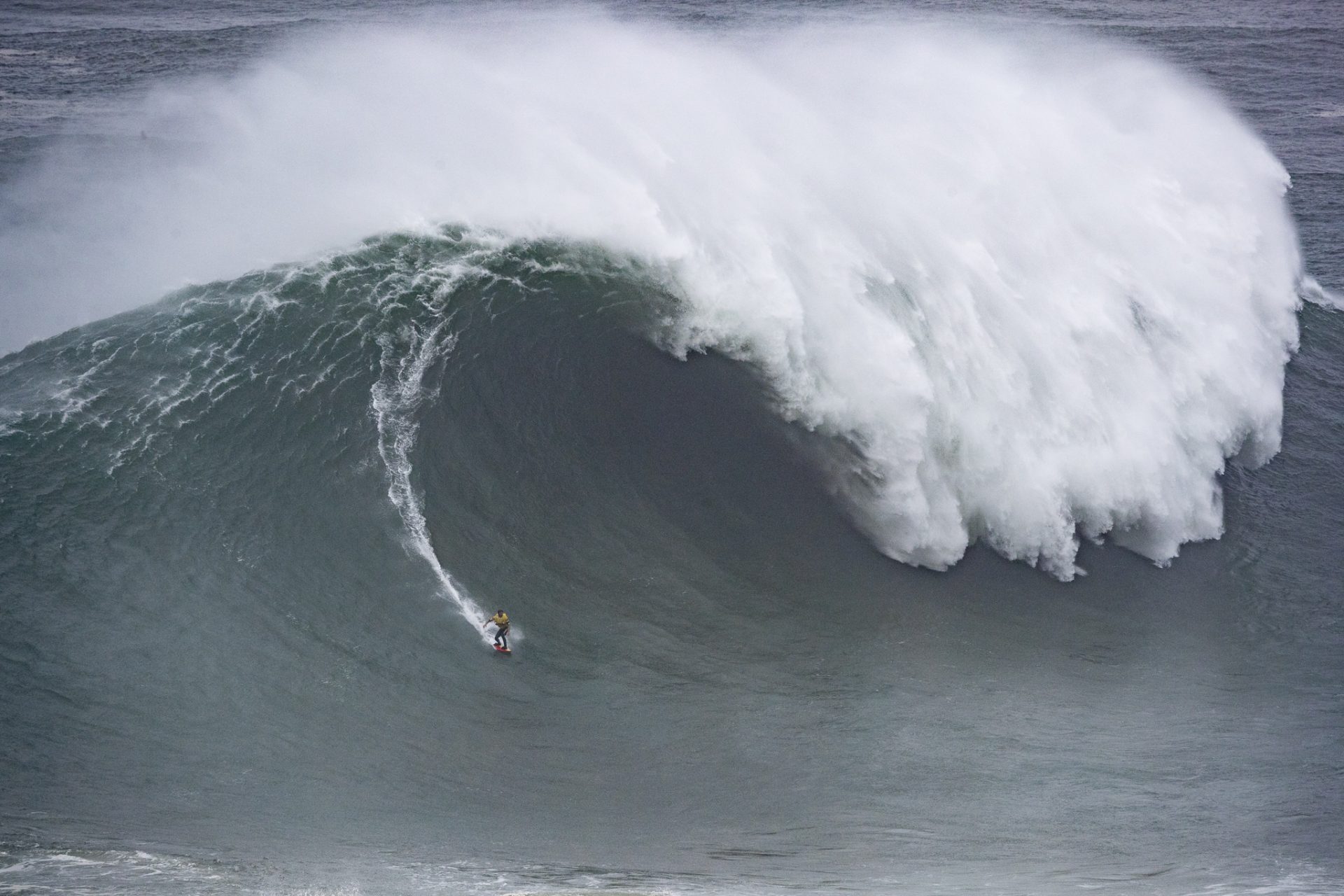 Hawaiian Kai Lenny has continued his incredible run of form at the Nazaré Tow Surfing Challenge, which ran today in massive waves at Praia do Norte, in Nazaré, Portugal. He was joined on the winner’s dais by women’s best wave winner Justine Dupont.

“This event has almost been a lifetime in the making,” said Bill Sharp, Big Wave Tour General Manager. “It’s just fantastic to experience it with a completely different format – essentially a day-long expression session without worrying about advancing or giving a score before a certain amount of time. Everything has come together and today was one of the best days in big wave surfing’s history.”

Competition got underway at 8:30am local time with uncharacteristic very light offshore winds and huge surf breaking below the world-famous cliffs of the Praia do Norte lighthouse. Competitors got in rhythm right away and started to ride mountains of water in front of huge crowds lining up the cliffs. The level of performance kept rising throughout the day as surfers and ski drivers got accustomed to the conditions of today’s swell.

Standout rides, dramatic wipeouts and incredible rescue efforts were aplenty throughout the first four heats, which eventually prompted organizers to extend the duration of the competition. Surfers were given a third opportunity to spend an hour in the lineup in the search for the biggest and most treacherous rides of the Nazaré Tow Surfing Challenge presented by Jogos Santa Casa.

French powerhouse Justine Dupont, of France, who now resides part-time in Portugal has been a standout in the Nazaré lineup for a few seasons now and proved once again today her worth among the best surfers in the world. The 2019 Women’s XXL Biggest Wave Award recipient was towed into a massive, glassy left and negotiated the speed and line perfectly to exit on the wave’s shoulder and get picked up to safety.

“I was so lucky I had a really nice wave at the beginning of the heat so then we felt pretty comfortable out there,” Dupont said. “I’m really happy, Fred and I had a good rhythm and Clement was there to pick me up after all the waves. All the work that we’ve done this past year has really paid off. There were some really big waves, maybe not giant, but altogether the conditions were perfect for competition.”

Hawaiian big-wave phenom Kai Lenny added yet another impressive line to his resume with today’s Men’s Wave of the Day award at Nazaré. A true innovator, both with his equipment and his choice of lines riding the massive waves of Nazaré, Lenny got the crowds fired up with spinning airs off the peak, incredible hang time and crazy carves to claim the day’s coveted title.

“I wouldn’t have been able to ride this wave without Lucas so it’s as much his award as it is mine,” Lenny said afterward. “That’s what is cool about tow-in surfing, I’ve spent the last couple of years competing against him in paddling events and it was great to finally get to team up and have the camaraderie to do it. He whipped me into that right just as we were riding back out – that wave just looked like it was going to wedge and it turned out way bigger than we thought it would be.”

Team Young Guns, comprised of Kai Lenny and Lucas Chianca, of Brazil, won the team distinction for their collaborative efforts towing into some of the biggest waves of the day and drawing effortless, unique lines in the massive walls of Nazaré. Both surfers looked more comfortable in the 40+ft faces than most surfers in head-high surf, giving all the fans an unrealistic feeling of ease while their rides were simply extraordinary.

“We haven’t had that much training together – only a couple of sessions,” Chianca admitted. “But when I see Kai perform I think it just matches perfectly with the way I like to ride as well. We drive for each other like we really want and it feels really comfortable.”

Surfers put their lives on the line all day as they rode massive surf in the six, hour-long heats in the Portuguese lineup. The priority for all involved was of course the security of the athletes and a very extensive safety and medical plan was put in place to face all kinds of situations.

“Those 19 surfers involved are 19 of the best water safety rescue people in the world,” Bill Sharp described. “So for the athlete riding a wave, your driver is your first line of defense. Each team also has their own back-up rescue operator, then we have a third layer which is a WSL crew in case someone is missed by the first two. Finally, we have the medical response on the beach with doctors and on boats.”

“Every wave has its own set of challenges,” Scott Eggers, Water Safety Director added. “There is so much chaos out there that it’s very unpredictable. This wave just happens to get big, very, very big.”

During the award ceremony tonight, surfers got together and voted in favor of the water safety team to receive the Jogos Santa Casa Commitment Award, for the incredible work done by all the people involved in keeping athletes safe.

If any swell brings dozens or hundreds of people out on the cliffs of Nazare, this particular one and the fact that 19 of the best big wave athletes on the planet were on the case, brought the crowds out in their thousands. An exciting day of surfing unfolded as crowds clapped, whistled and held their breath as surfers took on the unruly conditions.

“Nazare has gone from a sleepy fishing village that was a vacation destination for a few in summer to now one of the most famous big-wave surfing spots on the planet,” Sharp added. “People come here by the hundreds of thousands every year to check out the fort and the amazing waves of Praia do Norte. It’s amazing to think that waves have been breaking here since the beginning of time, but it wasn’t until a few years ago that surfers were able to get out there and surf them. And now the amount of people that come to watch them both here in Nazare and online is unprecedented.”

Gerry Lopez: The Hippy In The Eye Of...