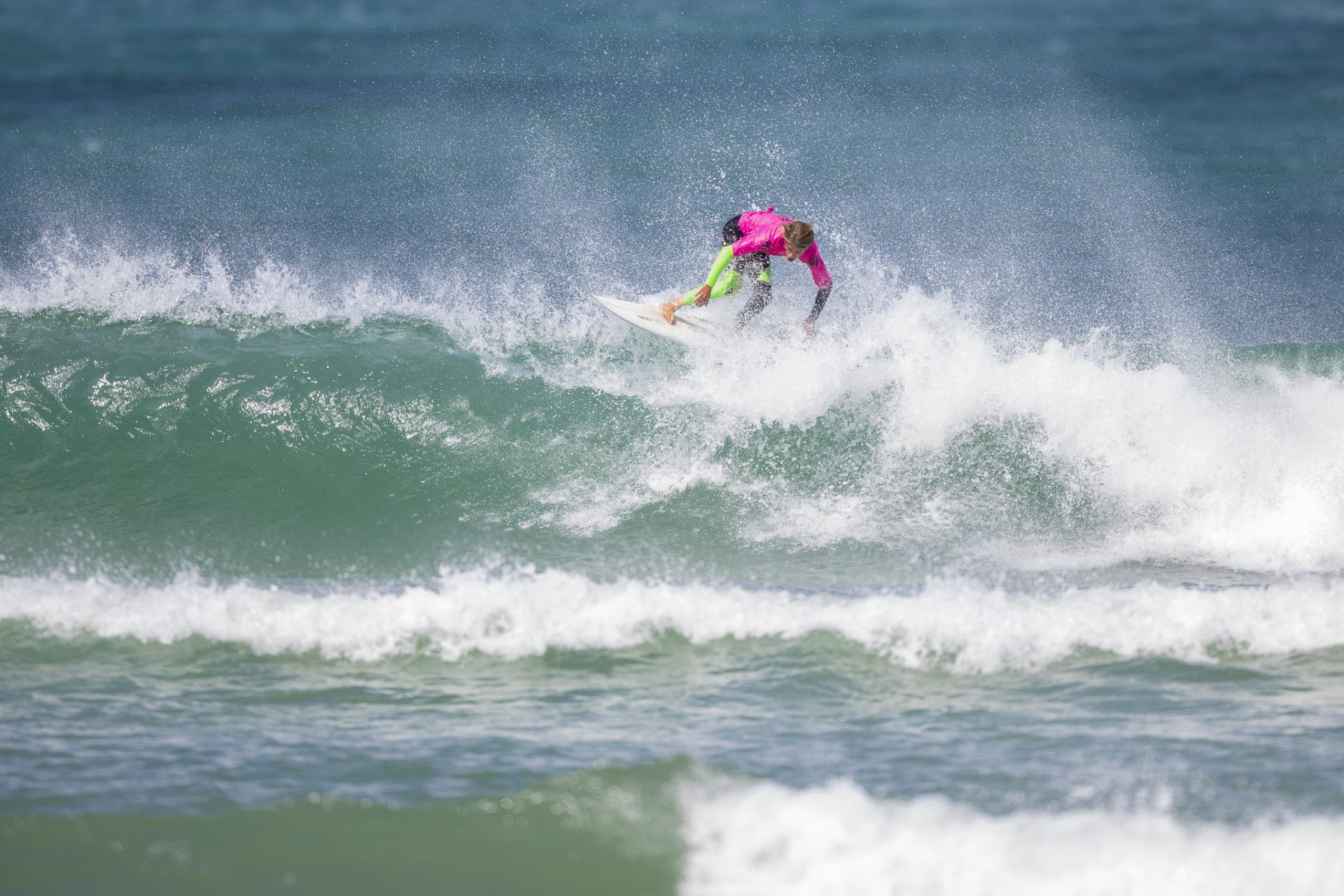 Luke Rogers and Ava Henderson rise to the top of a hungry pool of grommets at Round 3 of the South Island Grom Series held in fun waves at Porpoise Bay in the Catlins.

Originally scheduled be held at Colac Bay, which was super fun for most of the day before, comp day revealed completely different weather conditions. The swell had dropped and the wind was howling side shore and made for poor contest conditions.

The call was made to do the 90-minute drive through to Porpoise Bay in the Catlins. It was a bit of a gamble but we hit the jackpot and arrived to 2-3ft A-frame peaks with offshore winds.

The contest machine kicked into action and it was decided to run two arenas and capitalise on the high tide conditions and finish the event in one day.

Surfers to impress in the early rounds included the Kaikoura trio of Reuben Lyons, Tyler Perry and Sonny Lyons. Ava Henderson carried on where she left off last weekend after winning the Billabong Grom Comp in Whangamata and looked like the one to beat in the U16 and U18 Girls. Another girl to stand out in the early rounds was Invercargill surfer Katie Oliver, competing in her first South Island event.

A large contingent from the South Coast Boardriders had made the journey south and it was siblings Jaya and Nixon Reardon along with the Owen brothers, Alexis and Jake, who caught the eye.

In the U12 Girls’ final it was Southland Boardriders Katie Oliver who got out on some clean face and got some nice rides. Following in second was Tessa Gabbott, with Rewa Morrison and Pippa Humm finishing 3rd and 4th.

The U12 Boys turned into a battle between Sonny Lyons and Alexis Owen. With both surfers already winning one event each in the series the contest heated up, with both trying to get the win and the 1000 points. In the end, it was Alexis who got the nod over Sonny. Not far behind in third was Ben Sinclair and in 4th was Keo Morrison.

Katie Oliver once again showed her class in the U14 Girls’ final, picking off two righthanders in the early minutes of the heat that kept her in the lead until the end. Amelie Wink edged ahead of her Point Surf Team (PST) team mate Holly Campbell to take 2nd and Taya Morrison finished 4th.

The U14 Boys’ final was once again very tight with only a one-point spread between 1st and 3rd. Waikuku surfer Jack McKenzie left it until his last two waves to snatch the lead from Tyler Perry. Also very close was Tom Robertson coming in 3rd and Jake Owens 4th.

Ava Henderson didn’t have it all her own way in the U16 Girls, with the two South Coast girls, Anika Ayson and Jaya Reardon, pushing her all the way. In the end placings finished with Ava, Anika, Jaya and Holly.

The U16 Boys’ final was another great battle with Luke Rogers laying down some nice lines and Reuben Lyons throwing everything into his turns. Lyons took an early lead, but it was Rogers who fought back and claimed the win over Lyons. Nixon Reardon finished 3rd and Tyler Perry 4th.

The U18 Girls’ final had Ava Henderson scoring a 6 and a 7 on her first two waves and leaving the other girls playing catch up. Jaya Reardon finished second ahead of Anika Ayson and Sophie Oliver.

Jack Rosewarne made the long journey from the Waikato to Southland to have a crack at the U18 Boys, but couldn’t stop the rampant Luke Rogers in the final. Luke was surfing with speed, power and flow all day and took out his second win at the event. Jack took 2nd with Koby Cameron 3rd and Reuben Lyons 4th.

Next stop on the South Island Grom Tour is the Duke Festival of Surfing in Christchurch 15th-17th March. Entries are now open at www.surfingnz.co.nz

The Reef: Riding A Once In A Blue Moon Swell