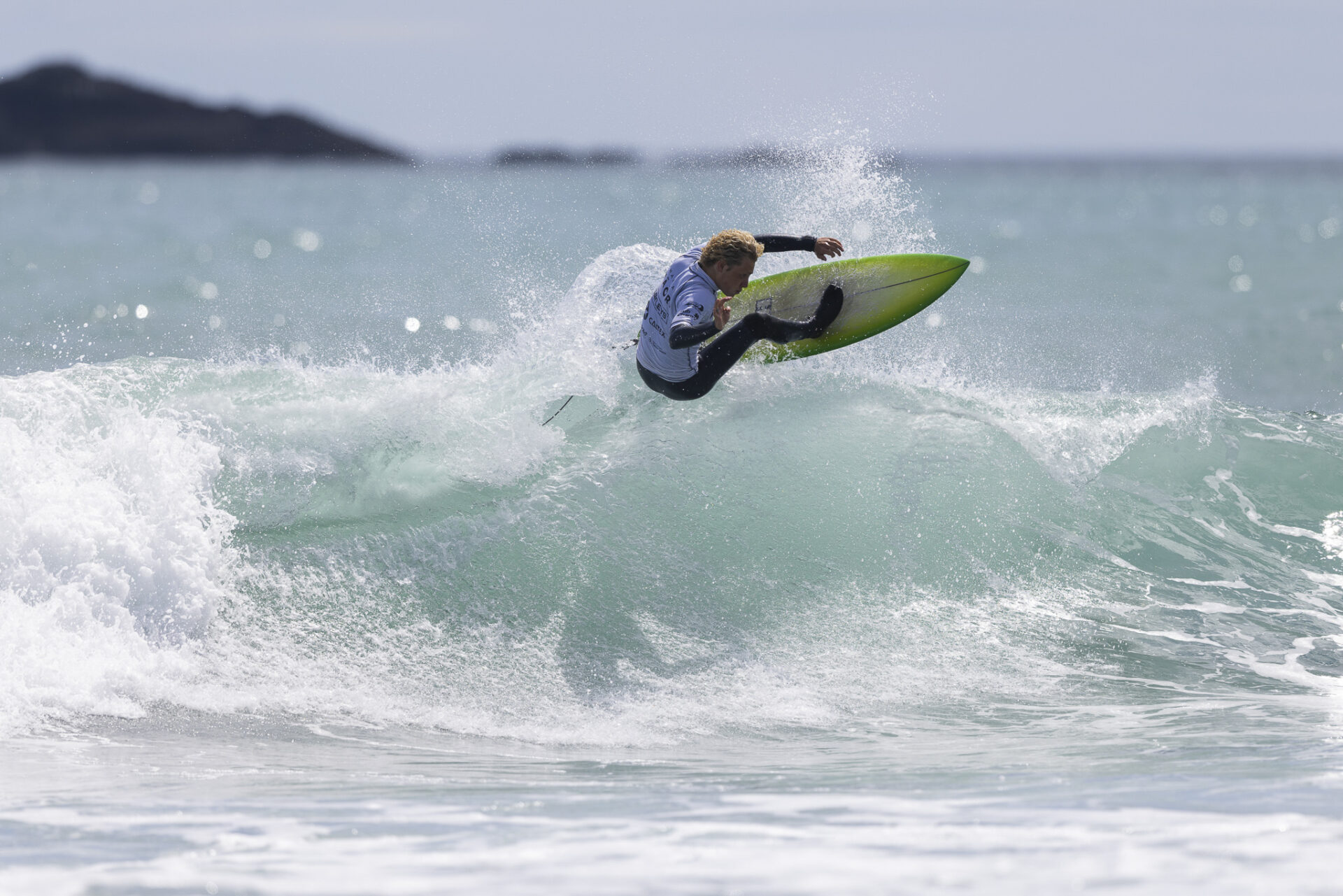 Piha’s Liv Haysom broke through to win the Under 18 Girls Division at the 2022 New Zealand Scholastics Surfing Championships held in Taranaki this week with Kaikoura’s Tyler Perry making a late charge to clinch victory in the Under 18 Boys division.

The event has been running on the Taranaki coast since Monday with the first two days held in appalling, but contestable, conditions before the event moved to the iconic Stent Road. The new location featured consistent 3-4 foot swell that produced two days of incredible surfing for the 110 surfers (and their families) in attendance.

The final day of the event was held in clean waves of up to 1.0m at Back Beach, south of New Plymouth. Offshore winds prevailed all morning, with an incoming tide making the action close to the vociferous cheering teams assembled beachside.

Team captain for Auckland, Liv Haysom, won the Under 18 Girls Division in her final year in the age category.

“Oh my gosh, I am feeling ecstatic, the win in the Under 18s is awesome,” she smiled. “This is my last ever junior event, and this is the way I wanted to finish my junior career.”

“To win with the Auckland Team, we are just over the moon, we are so stoked,” Haysom added. “I don’t think we would have won it if just one surfer in our team placed lower than they did, so everyone put 100% toward this win. The team spirit was so high – there was so much support from all our team and team supporters.”

An indication of the tight race was the points totals of 8090 vs 8008 between Auckland and Canterbury.

The Auckland Junior Surfing Team claimed its maiden National Scholastic Surfing Championship. Until now, the surf-proud region has not been able to put its name on the trophy since the event’s inception in 1989.

The team won the title by the smallest of margins, staking claim to three of the eight individual titles on offer, to outpoint defending champions Canterbury in second place and Bay of Plenty in third.   Auckland won titles in the Under 18 and 16 Girls Divisions and Under 18 Boys Longboard.

Individual titles were shared around the regions with Canterbury winning two and Otago, Coromandel and Gisborne all picking up one a piece.

“I’m stoked to take the win – this is my first big national win,” Perry shared afterward. “The team went well this week, we almost went back-to-back but not quite.”

Despite a slow start in the final, Perry stormed into the lead and eventual win with some power surfing in the small beach break conditions.

“I was thinking the judges wanted to see a big turn,” he reveals. “I knew if I could get two turns, that would be a high score, so I just held priority and waited for a big one because I thought I am not going to win a final on shit waves.”

Third placed Bay of Plenty went into the final day with six of 12 surfers alive but they ultimately missed the titles required to lift the shield this year.

Team captain Anna Brock (Mnt) placed third in the final of the Under 18 Girls Division and remained upbeat about the team’s performance over the week and their ability to remain title contenders, year in, year out.

“To get into the final myself and then my teammates getting into the final and doing well too made me want to win that last heat but it wasn’t to be,” admitted Brock.   “Every year it has been close for us as a team and last year we would have had a good chance too. Two years ago, we were one place away from the shield again.”

“Bay of Plenty is right there, hopefully they get the title next year and I will be cheering them on from the side lines,” added Brock, who graduates from secondary school for 2023.

“We have been training hard for a term and a half for this event, so we are gutted we didn’t get the result we wanted,” Brock explains. “It would have been the tenth title and record breaking, but third is epic. The other teams did awesome and it is good to see Auckland take their first title – they deserved it with all the individual titles they won today.”

Coromandel’s title went to India Kennings (WGM) who won her first ever national event in the Under 14 Girls Division. Coromandel jumped up the overall rankings to fourth place thanks to five finals’ berths.

Gisborne’s title went to Jay Emere-Ryan in the Under 18 Girls Longboard Division.

Otago’s title went to Alexis Owen who put on a dominant display in the Under 14 Boys Division.

The National Scholastic Surfing Championships has been held since 1989. Its inception is credited to the late Bob and Mary Davies. The event, which has unearthed two generations of top Kiwi talent over the years, took place along the Taranaki coastline from 10-14 October, 2022.

The event comprises eight age group divisions for males and females across both shortboard and longboard disciplines. Twelve regional teams from throughout the country contest the event with 11 teams in attendance in 2022 vying for both individual titles as well as the overall team title.

Canterbury was the defending champion at the event having won the event in home waters in 2020.

More than 110 surfers participated at the event in 2022 after having qualified to represent their 12-person teams via a series of regional events held during winter months.   The 2022 National Scholastic Surfing Championships is sanctioned by Surfing New Zealand, Secondary School Sport NZ. The event is made possible with the support of Pub Charity. The event is supported by the New Zealand Sports Collective, Whakaata Maori, Caltex, Bayleys, Apollo Projects, Pure Athletic and NZ Carbon Farming.