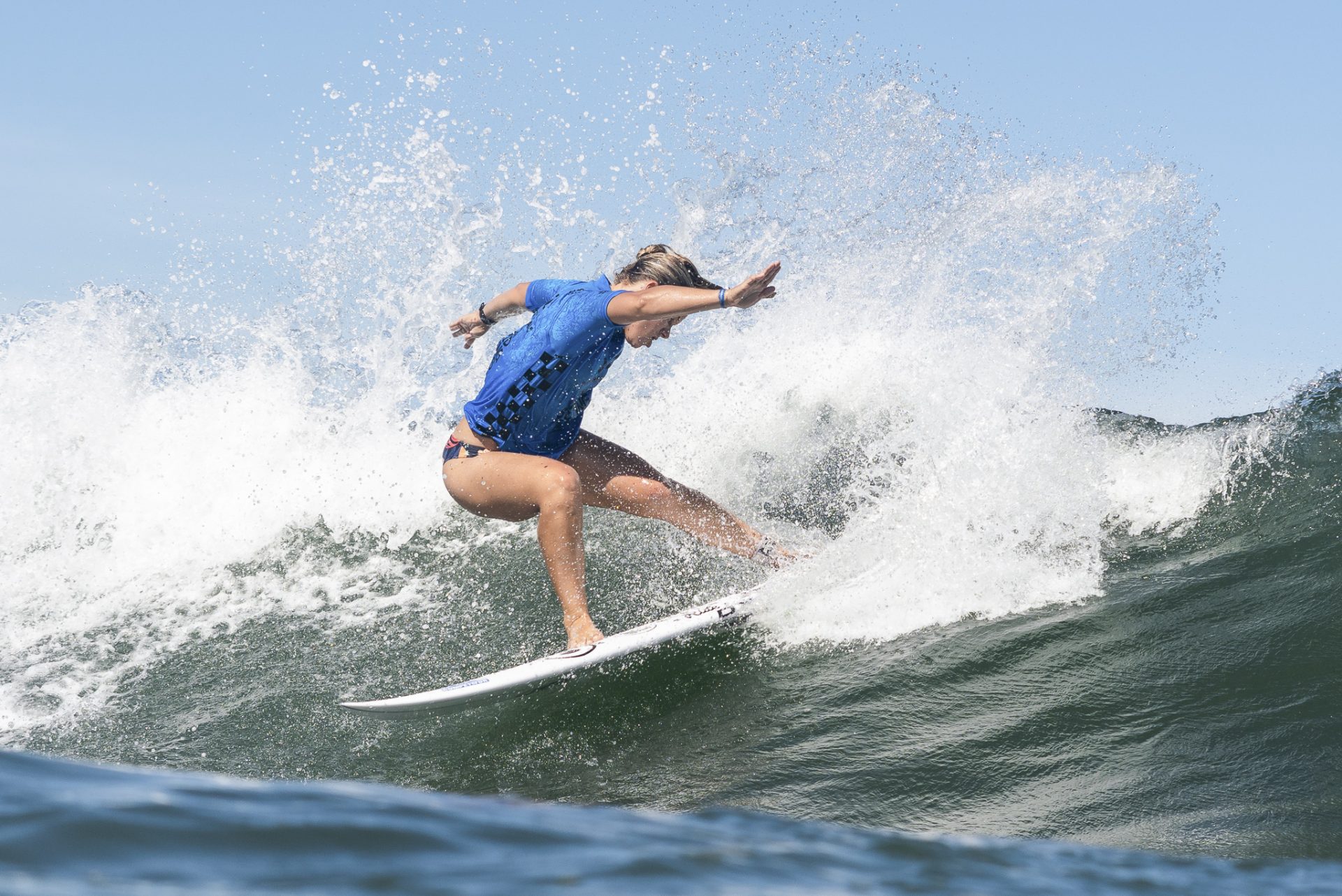 Paige Hareb closes in on Olympic qualification at the 2019 ISA World Surfing Games held at Miyazaki, Japan. By the end of Day 3 today (Monday 9th September), the women’s Oceania Olympic qualifier could be determined.

While a gold medal is the main aim of the World Surfing Games, the race within the race is qualification for the Tokyo 2020 Olympics and three New Zealand women are well within reach.

The Oceania surfer that finishes the highest ranked, and inside the top 30 surfers at this event, will qualify for the Tokyo 2020 Olympics.

For Paige Hareb, of Taranaki, the top 30 bracket is just one heat progression away. For Ella Williams, of Whangamata, and Raiha Ensor, of Mount Maunganui, the top 30 is two heats away. This comes after a successful day for all three surfers on day two (Sunday 8th September).

The swell built throughout the day at Miyazaki, Japan, finishing in 1.0m to 1.5m waves with light onshore winds as the anticipated typhoon swell began to show.

Hareb took down one of the event’s biggest medal threats in her second round match-up eliminating current WSL world number one Carissa Moore, of USA, to the repechage rounds before herself dropping down to the repechage after Round 3.

“It’s always a nice feeling beating a world champ, but then I lost the next heat … so that’s surfing,” reflected Hareb. “Anyone can win or lose, so I’ll just keep trying my hardest and hopefully the ocean will cooperate with me for the rest of the event.”

“It’s always a nice feeling beating a world champ, but then I lost the next heat … so that’s surfing. Anyone can win or lose, so I’ll just keep trying my hardest and hopefully the ocean will cooperate with me for the rest of the event.”

As a massive day three looms, where Hareb could surf up to four times if she gets on a roll, the oppressive heat of the Japanese summer is front of mind.

“Three heats is pretty hectic, mainly because it’s so hot here so you’re more worried about staying out of the sun and trying not to get dehydrated. Luckily the surf was small so physically I didn’t feel tired at all,” Hareb said.

Only one of Hareb’s opponents has been confirmed in USA’s Courtney Conlogue. She will have to wait for the other repechage rounds to be completed, including teammates Ella Williams and Raiha Ensor, before knowing her next opponents.

Ella Williams rounded out the day with a second place finish to Puerto Rico’s Tia Blanco to keep all three Kiwi surfers in the event. Having arrived to the event only the day before competition, Williams is happy to have contested three heats and is starting to get a feel for the wave.

“All of us got here the night before the event and we went straight into the first day of competition, so it’s been very full on and mentally and physically challenging,” admitted Williams. “We are holding up great and progressing through and the Kiwi support for each other is lifting us all up and bringing us together to make an even stronger team.”

“For me every heat is another chance to get my feet in the wax and I think our team will love the bigger swell forecasted. We all thrive off it and are pretty excited to see it build.”

Raiha Ensor also contested her two repechage rounds on day two finishing with a strong win (12.43 points) in her final heat where she advanced alongside South Africa’s Sarah Baum.

Ensor will face off against surfers from Canada, Mexico and Chile in her first heat on day three.

The Men’s Division will commence on Tuesday 10th September.