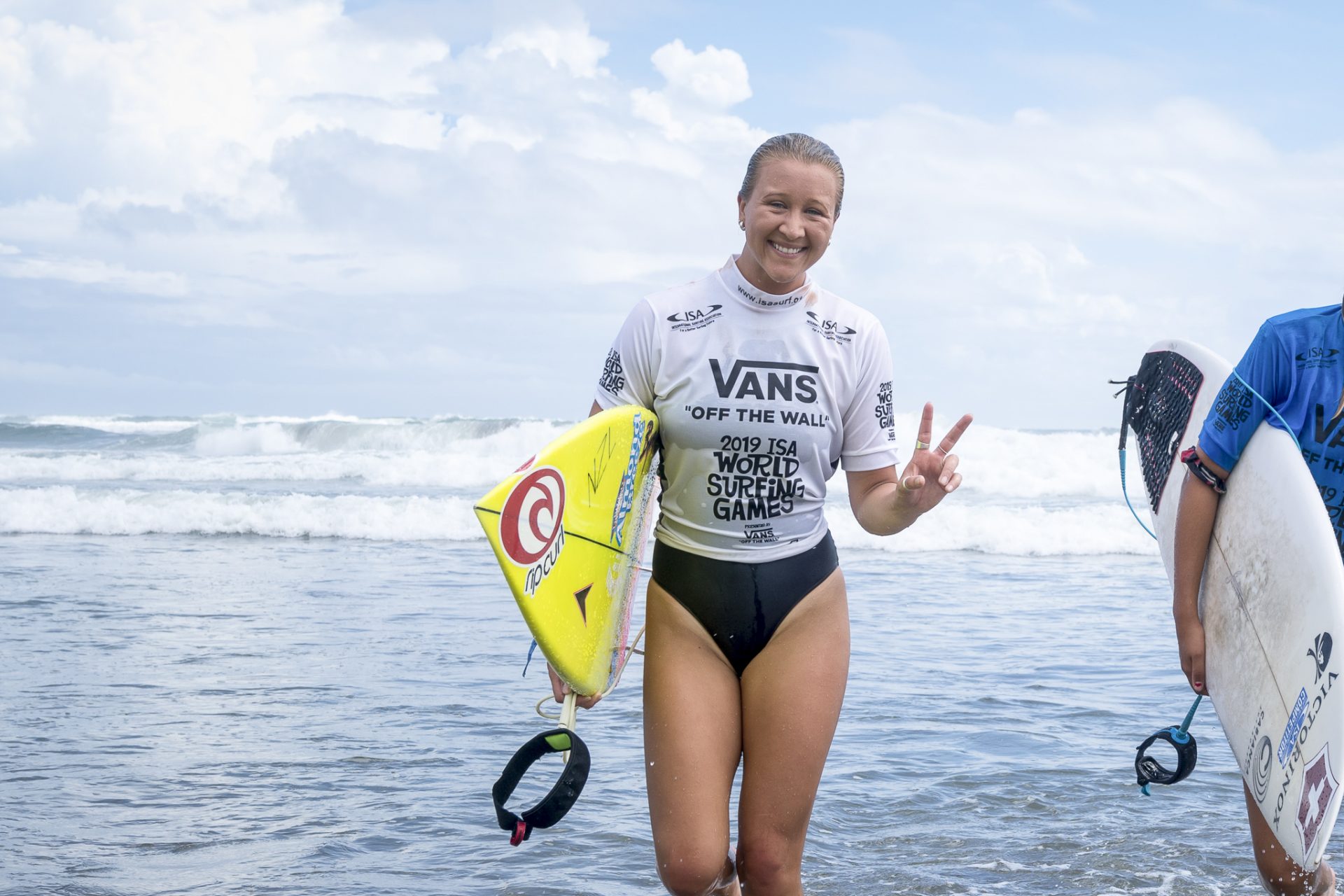 Kiwi surfer Ella Williams has provisionally qualified for the Tokyo 2020 Olympics securing the Oceania slot after placing the highest of the Oceania surfers at the ISA World Surfing Games presented by Vans yesterday.

Williams will be part of an exclusive group of twenty female surfers from around the world who will attend the first-ever Olympic surfing event in July next year.

“It has definitely been a big high of emotions especially when I found out that I had claimed a spot in the 2020 Olympics,” Williams admits. “It’s always been a dream of mine to be there – now it’s becoming a reality. I feel so proud to be a Kiwi and to represent New Zealand on the world stage.”

Williams started the day with crucial performances required in the repechage rounds to push her Olympic cause.

“I knew I had to make the two heats at least to have a fighting chance. But I just tried to put that out of my mind and get through heats and knew the rest would follow,” she admitted, discussing the scenario hanging over her head all day.

Williams convincingly advanced through two heats with wins to get into the all-important Round 5 and the top thirty surfers in the event. In a rollercoaster ride of a day, her journey ended there after getting caught inside the break with solid 1.5m – 2.0m typhoon waves hammering the coastline. She finished fourth in the heat and 29th equal overall.

The International Surfing Association took several hours after William’s result to confirm she had provisionally qualified with detail in the qualification process being analysed. The provisional nature of the qualification is due to the multiple routes a surfer can qualify for the Olympics. Paige Hareb has three remaining events on the 2019 World Tour to push her cause for qualification. The 2020 World Surfing Games is the final opportunity for athletes to qualify. Female athletes can do so by finishing in the top six surfers that have not already qualified via the World Tour or 2019 World Surfing Games. The 2020 World Surfing Games takes precedence over the 2019 edition meaning two good performances by Kiwi surfers could bump Williams out of her Oceania slot.

Williams started the day alongside her two Kiwi teammates in Paige Hareb, of Taranaki, and Raiha Ensor, of Mount Maunganui. Ensor advanced through her first heat of the day but came up short in her second performance finishing third in her heat to Sarah Baum, of South Africa, and Ornella Pellizzari, of Argentina. Ensor finished with a 7.60 point heat total and only required a small 4.83 point ride to advance. Ensor finished 33rd overall at the event.

Paige Hareb also contested Repechage Round 4 and was vying for Olympic qualification by advancing out of the round. Hareb came up against fellow World Tour surfers and USA teammates Courtney Conlogue and Carissa Moore who she had defeated in the qualifying rounds. However, this time it would not go Hareb’s way in a close battle. In the dying stages of the heat, Hareb surfed to a 4.07 point ride, just short of the 5.01 required to advance, leaving her in third place with less than two minutes remaining on the clock. Hareb finished 33rd equal with Ensor.

The New Zealand Women’s results see New Zealand sitting in the eleventh position in a tight bunch of nations. USA and Australia lead the 55 nations competing with all their surfers alive in the event. The final of the Women’s Division will be completed today with the Men’s event commencing after the finals.

Ricardo Christie, Billy Stairmand and Kehu Butler will start their campaign for gold and also another chance to represent New Zealand at the Olympics by emulating the performance of their teammate.

Piha Pro Is Back As WSL Releases New...