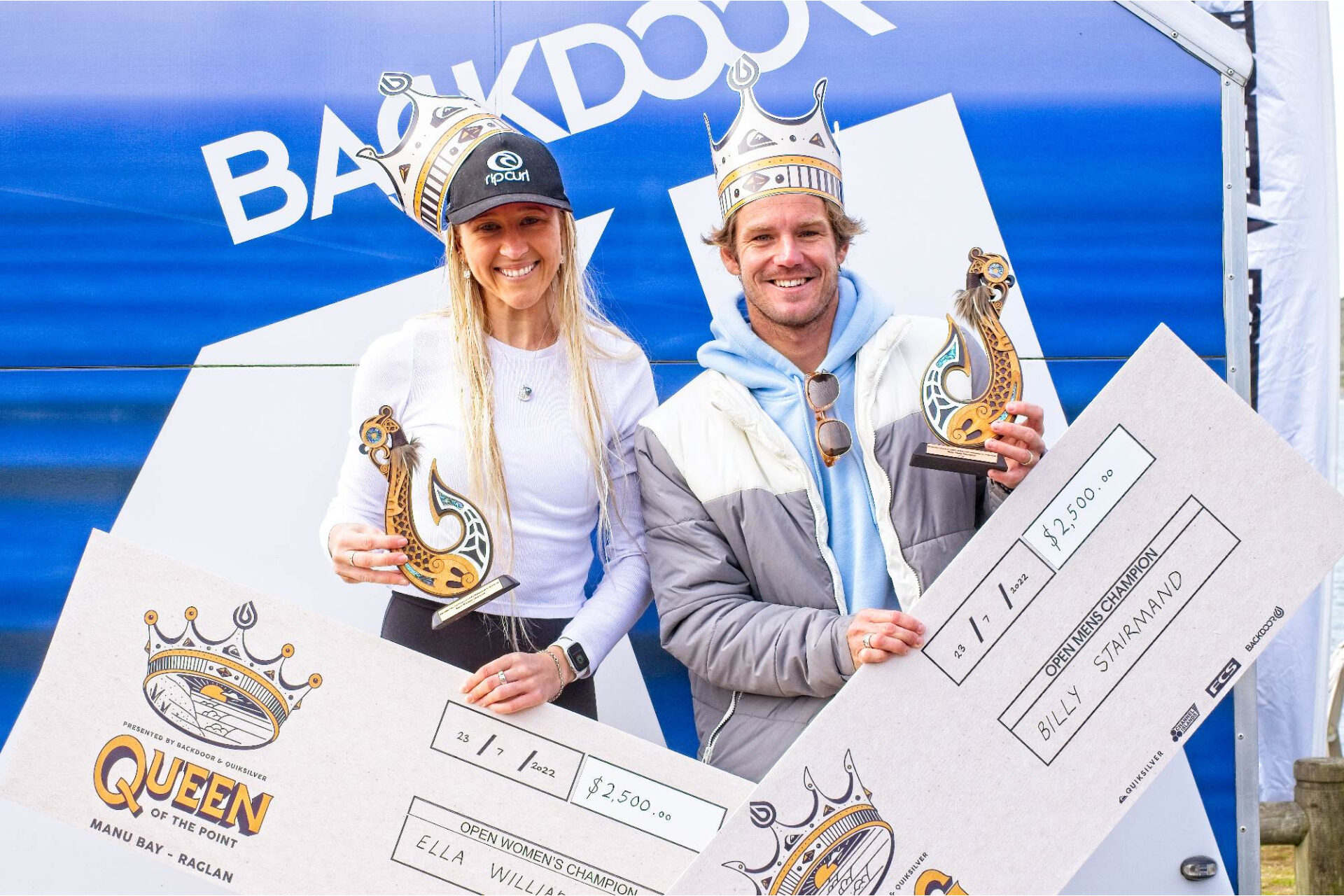 Billy Stairmand defends his title and Ella Williams returns   to competition as the duo are crowned champions at the Backdoor King and Queen of the Point.

Stairmand snatched a come-from-behind victory in the Men’s Division while Williams took the win in a tough two-way tussle in the Open Women’s Final.

With the swell expected to decrease further with a strengthening easterly wind, it was decided to push through to the finals of each premier division on Day 2 of the event leaving the junior divisions for the final day of the event.

Stairmand’s win came at the expense of three fellow Raglan surfers and none more so than Caleb Cutmore who led until the final minute of the final.   On his final wave, Stairmand posted a 6.47 to edge past Cutmore’s 14.00 with a 14.30 and the win.

“I think as competitive surfers, that is the type of the win you dream of, knowing you can get the win and surfing a clutch wave to just get the score,” said Stairmand of the outcome.   “Caleb has been training and surfing so well and Kora is the up and comer from Raglan and of course Luke rips, but yeah, I am stoked to take the win.”

Stairmand is hoping to take this momentum into the US Open of Surfing which starts on Sunday week.

“I have been doing well in the regional events, but unfortunately not so much in the Challengers, so it is time to put my best foot forward and hopefully get a result at Huntington Beach then head to Europe for the back half of the year. Huntington is a wave I like to compete at, and I did fairly well there last year so I am looking forward to next week,” added Stairmand.

Cutmore came so close in the final, surfing with superior speed on his forehand and posting the only excellent ride of the final, an 8.0-point ride. However, that was not enough to stop Stairmand. The form surfer from Day 1, Luke Cederman finished the final in third place ahead of the youngest competitor, 18-year-old Kora Cooper in fourth.

Earlier in the day, Stairmand and Cutmore defeated Jay Quinn (Gis) in the first semifinal while Cederman and Cooper defeated Jarred Hancox (Tara) in the second.

Ella Williams came back from a 12-month break from the competition arena to find her best form in the final, surfing to a 15.76-point heat win defeating local surfer Brie Bennett (14.40) in the final.

“I am so happy,” Williams said. “It is great to be back and competing in good waves and to come away with the win for the weekend is amazing. I am so stoked.”

Williams has not put on the coloured jersey since the Tokyo Olympics.

“The last twelve months away from competing has been good, I have had plenty of family time and I have been free surfing a lot and being at home more often than not, putting away the suitcase, it has been refreshing.”

Bennett pushed Williams all the way in the final with Estella Hungerford (Chch) finishing in third and Natasha Gouldsbury (Tara) in fourth.

“A good finals challenge is what makes comps fun,” added Williams. “It is what makes it good for the spectators too, having a close match up. All the finalists were surfing great all weekend and Brie was especially pushing me in that final, she knows the wave well and I am happy to get the win today. Next time she will be knocking on the door again I am sure.”

Whitianga surfer Jay Piper–Healion showed the most poise on the retro boards to walk away with his height in Workshop Beer. Jay was pushed to the final wave of the 30 minutes by wildcard Simon Fritchley and the lone female of the eight, Elin Tawharu.

A change in venue was required for the final day of the event with Ruapuke Beach proving fruitful. A clean 1.0m swell and offshore winds prevailed all day producing groomed waves that held throughout the tides.

The Under 20 Girls Division was flipped in the final five minutes with seasoned campaigner Natasha Gouldsbury eventually claiming the win over double-finalist Chloe Groube (Pau) 13.25 to 13.1 points.

It was Groube who got off to a flyer with some big forehand power hacks for a 6.83 before backing it up with a 4.67. Gouldsbury took the lead with a heat-high 7.4 late in the battle. Groube fought back with a last-ditch effort, but requiring a 6.41, came up short with a 6.27, giving Gouldsbury the win.

“In my head I was going ‘I don’t want to get beaten by a 14-year-old,’” laughed Gouldsbury. “Chloe got that good one at the start and I knew she could have gotten more higher scores too, so I needed to get a couple of good waves. That last wave, I thought Chloe was going to get because she had priority but I got it and thought ‘go big or go home’,” said Gouldsbury. “So yeah, pretty stoked to get the win finally after some average results of late.”

Raglan surfers Alani Morse and Brie Bennett finished in third and fourth respectively in the Under 20 Girls Division final.

Gouldsbury’s New Zealand teammate Kora Cooper (Rag) won the Under 20 Boys Division to round out the day in a close final against his three opponents. Cooper finished fourth in the Open Men’s Division on Saturday and backed that form up with a win today. He posted an 11.43-point heat total in the final after taking an early lead and holding on to the end.

Cooper’s biggest challenge came from the in-form Jack Hinton who finished with a 10.1 point heat total, however Hinton couldn’t find the right waves that had seen him smash his way to the final.

New Zealand representative Jack Tyro (Chch) clinched the Under 16 Boys Division with the day’s highest total of 15.23 points. Tyro started the final strongly locking in a 7.23-point ride and added an exclamation mark on his performance with his last wave of 8.0 points out of a possible 10. The final could have gone a number of ways until Tyro’s last wave and it was Tao Mouldey (Mnt) that finished in second place on 11.96 points. Piha’s Will Hardie finished in third place ahead of Tava Santorik (Mnt) in fourth.

Maya Mateja (Rag) ran away with the Under 16 Girls Division despite being away from her favoured Manu Bay. Mateja posted a 10.83-point total in the final punctuated with a clean two-turn combo at the end of the final that netted a 6.0 ride. Up until the final wave, it was a close tussle with all finalists. Chloe Groube (Pau) fought her way into second place on 7.17, narrowly edging Pia Rogers (WGM) in third and Lani Frazerhurst (Rag) in fourth.

The Backdoor King and Queen of the Point is a SNZ3000 event with $15,000 in prize money – the richest event of the year and with maximum national ranking points on offer. The event is made possible thanks to the generous support from Backdoor Surf Shop, Quiksilver, Channel Island Surfboards and Sticky Johnson. The event is hosted by Raglan’s Point Boardriders.

*Results for the Under 20 and Under 16 Divisions not available when we went live.