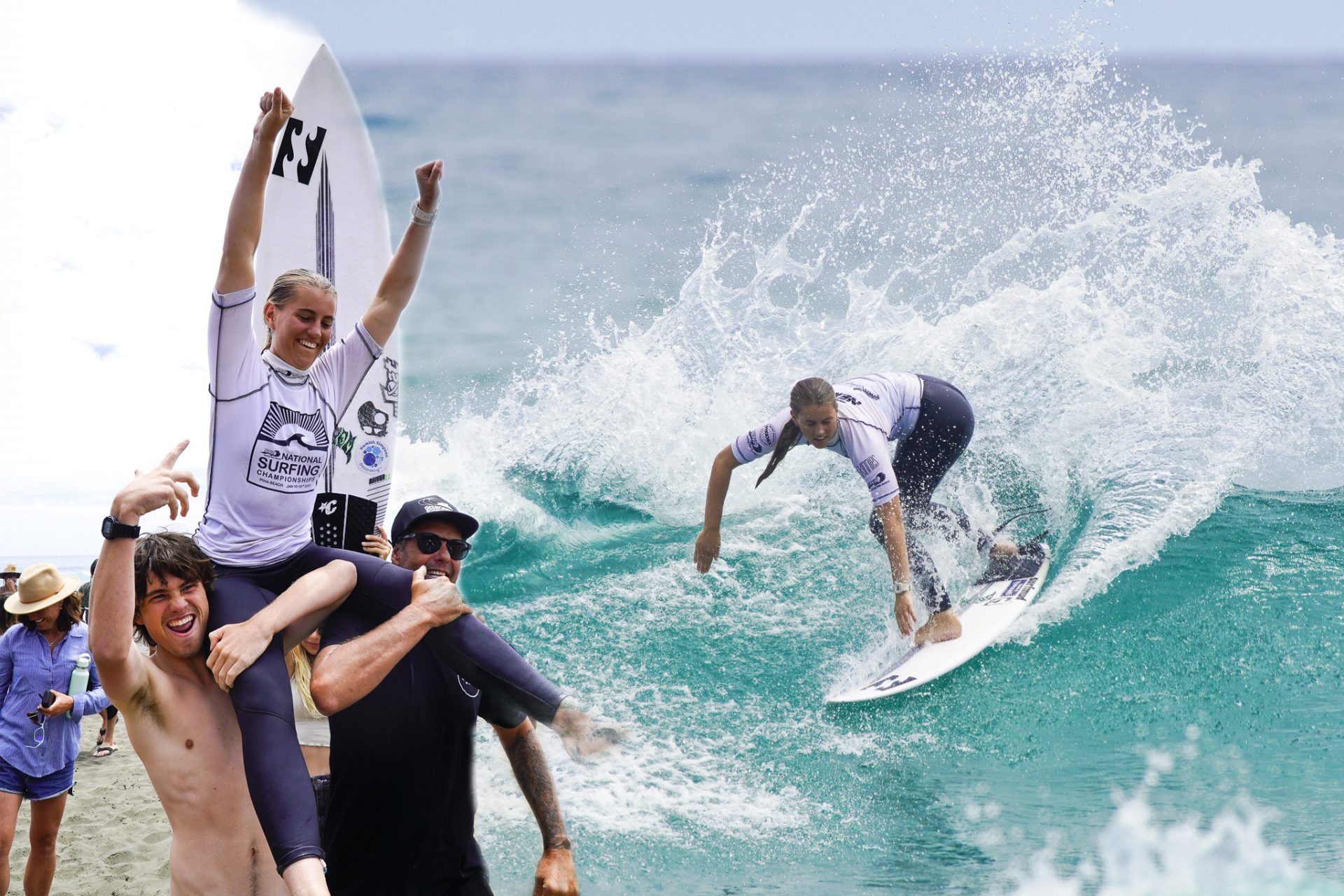 Saffi Vette brings the crowd to tears with her win at the 2021 National Surfing Championships, while Billy Stairmand breaks his own record with an eighth national men’s title at Piha.

Finals day at Piha for the 2021 National Surfing Championships presented by The Trusts Community Foundation included an emotional win for Saffi Vette in the Open Women’s and her brother Finn in the Under 18s, just months after their father, Andy, passed away.

“Dad sent me a few waves today and the whole week for both me and Finn actually,” the 19-year-old revealed tearfully after her win.

Vette, of Gisborne, claimed an emotional national title that brought much of the surfing community present to tears as she exited the water.

Vette faced off against the most talent-laden field of finalists ever. The final featured World Tour surfer, Paige Hareb, former World Junior Champion, Ella Williams, and the defending national champion, Ava Henderson. Vette was quick to attribute the win to her father who passed away.

“I couldn’t be more proud to represent him and our family in the water so a big shout out to him,” she offered through tears after the final.

“Dad sent me a few waves today and the whole week, for both me and Finn actually. I couldn’t be more proud to represent him and our family in the water.”

Vette’s younger brother Finn was victorious in the Under 18 Boys Division and together the two surfers were jointly awarded the Byers Trophy for Overall Performance of the Event. Capping it off, the two led their Gisborne Boardrider Club to the overall title.

“Winning with my brother is unreal,” smiled Vette. “I gave him a massive hug when I saw him after his final and he told me to go hard and fricken dominate. That’s what I did and it ended up working.”

Vette kicked off her final with a 7.75 point ride and then toward the end of the heat, backed it up with an 8.15 point ride for the lead. Whangamata surfer Williams came back late in the heat with an excellent 8.15 score of her own for several big backhand snaps, but she fell short of the 8.49 point ride required for the win, handing Vette the title.

“I am so stoked, so unbelievably stoked,” added Vette. “It could not have gone any better for me, I opened up with a good score and ended with a good score. It was pretty nerve racking toward the end there, but I took it out, so I am absolutely over the moon. I stuck to my guns out there and it worked out for me this time.  Sometimes it does not, but it feels so much sweeter when it does.”

“Winning with my brother is unreal. I gave him a massive hug when I saw him after his final and he told me to go hard and fricken dominate. That’s what I did and it ended up working.”

Two-time champion Williams had to settle for runner up scoring 15.6 to Vette’s 15.9. Hareb (Tara) was left in third place unable to connect with the better waves in the final and leaving her search for a national title for another year. Defending champion Ava Henderson (Chch), who had been a form surfer throughout the event, surfed her fourth heat of the day in the final and sat patiently for the good waves that never arrived, leaving her in fourth place overall.

Vette was joined on the winners’ dais by Raglan’s Billy Stairmand who broke his own record to claim an eighth title in the Men’s Division.

The Men’s final presented another supreme showdown with Kehu Butler and Billy Stairmand wrestling for the top spot in the small waves. The judges decision came moments after the buzzer, giving Billy the nod and his record-breaking eighth National Open title.

Stairmand was pushed to the limit by New Zealand teammate Kehu Butler, of Mount Maunganui, before clinching the final with a 16.15-point heat total over Butler’s 15.25 out of a possible 20.

“I think the whole contest was tough, it was a good draw and I had stacked heats the whole week,” commented Stairmand.

“In the final me and Kehu were battling it out,” explains Stairmand. “Taylor had a few as well and could have easily got the score required. Jayden, the grom, had been surfing well all week, too. But I lucked into a good wave at the end, finished on my feet and got the score. So, I am stoked.”

“I thought I would go left a lot more in the final, but I got all my scores on the right so I guess you have to adapt to the conditions out there and take what comes. I had a good board and I have won here before so I felt confident it would be a good week,” said Stairmand of his performance.

It is Stairmand’s eighth title with the record starting back in 2010 with only three other surfers having won titles since.

“It’s pretty baffling to get eight. I will keep going until I can’t win,” he smiles. “I love a year that starts well and after last year being injured and then being stuck at home, it is good to start this year with a bang again. I love the National Championships.”

Butler finished in second after trading the lead with Stairmand on four occasions courtesy of two air reverses that he nailed on his forehand.

Butler finished with a 15.25 point heat total, 0.25 ahead of Taylor Hutchison (Rag) with the youngest surfer in the final, 16-year-old Jayden Willoughby (Rag) finishing in fourth place.

“It’s pretty baffling to get eight. I will keep going until I can’t win.”

Finn Vette surfed his Under 18 Boys Division final to perfection only surfing three waves with his top two totalling 15.1 for the win. Raglan’s Kora Cooper fought back toward the end of the final with a 7.35-point ride, but it left him needing a 7.76 point ride which was a big ask while Tom Robinson (Whngrei) finished in third and double finalists Jayden Willoughby finished in fourth.

In the Under 16 Boys Division it was Tao Mouldey that made it two titles for the week after claiming the Under 14 Boys Division on Friday. Navryn Malone (Rag) finished in second ahead of Jack McKenzie (Chch) in third and Rakiatia Tau (Chch) in fourth.

Mouldey won the Skinnies Grom Squad Award for top performer under the age of 16 at the event and as a result won the $1000 voucher to go toward a new surfboard.

Daniel Procter (Gis) completed the perfect comeback to competition in the Men’s Longboard winning today’s final with a 13.85 point heat total. Procter opened the heat with a 6.75 point ride and backed that up with a 7.1 point ride for the win. Thomas Kibblewhite (Auck) finished in second place in the final after surfing up the beach further from his opponents. Nat Fitt finished in third place ahead of Zen Wallis (Piha) in fourth.

The National Surfing Championships mark the first of several domestic events this season, which will conclude with a finale for the top 16 males and 8 females across the Open Men and Women’s Divisions.

2021 marks the thirteenth time the National Championships have been held at Piha. The consistent waves of Auckland’s West Coast make the venue a good location for the seven-day event, which is the longest running surfing event in New Zealand. It has a 57-year history and encompasses 29 divisions spread across all disciplines and age groups making for a largely inclusive event, filled with high-level surfing as well as good times in and out of the water. More than 320 entries were received for the event.