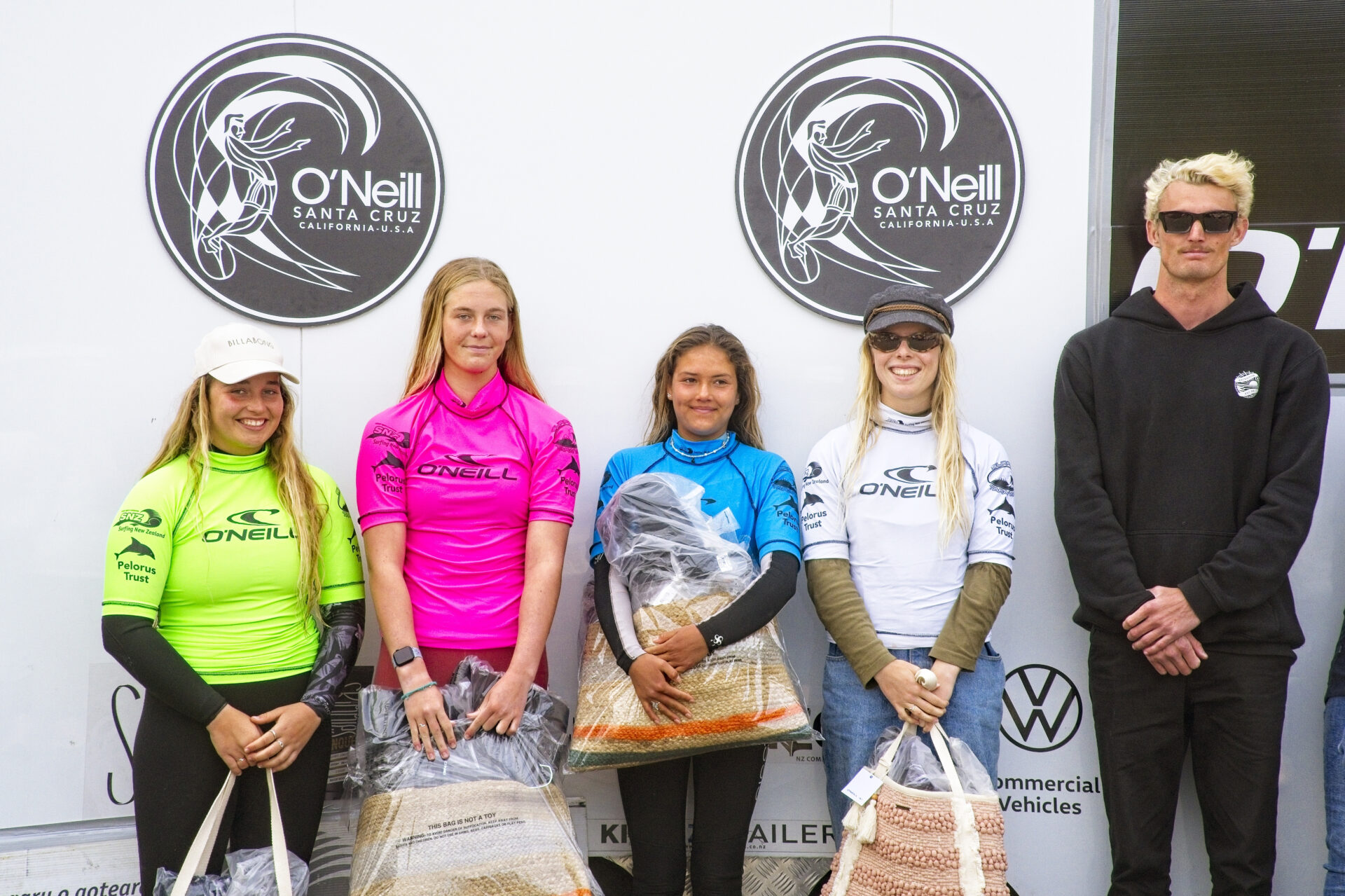 Unfortunately the surf decreased overnight and Sunday dawned at 0.5m with clean conditions, but the northerly soon greeted participants making the small waves barely contestable as the swell decreased further throughout the afternoon.

Mouldey surfed up a division today after already securing the overall NZ Grom Series prior to the weekend.

His win today pushed him up to second overall in the Under 18 Boys Division as well.

“It was sick to surf up a division today. I don’t get as many nerves or anything – it is more kinda fun for me,” said Mouldey, who made quick work of the final. Mouldey surfed a new bank as the tide allowed and he was rewarded with an early lead that he never relinquished.

“I saw the heat before mine and it was really scrappy between the four surfers and I felt like I saw a few lefts right out front and thought I would give it a go. At worst I would come fourth and it wasn’t a big deal,” said Mouldey of his decision to surf over 100m north of his opponents.

Mouldey finished ahead of runner-up Jack Tyro (Chch) in the final with Kalani Louis (Tara) finishing in third and Noah Camburn (Whaka) in fourth.

Natasha Gouldsbury had a different road to her victory finding herself behind early on before rallying for the win.

“When Maya got those two scores I was like ‘oh no’”, said Gouldsbury.   “I didn’t know how many waves there were going to be in that final. Then I got that little runner and got a couple of turns and it turned out good for the win.”

A New Zealand representative Gouldsbury had five wins this year for a maximum points total on the rankings. Today she finished ahead of Maya Mateja (Rag) in second, Liv Haysom (Piha) in third and Anna Brock (Mnt) in fourth.

Tava Santorik (Mnt) finished his season off with a win in the Under 16 Boys Division, his second victory in three events. The tall young surfer used his leverage to sneak in the best closeout turns of the finalists. His win elevated him to third overall this year behind Tao Mouldey (Mnt) and Jack Tyro (Chch).

New Zealand teammates Pia Rogers (WGM) and Leia Millar went head-to-head in the Under 16 Girls Division final with Rogers getting the nod this time 6.40 to 6.04.

It was a good way to bookend the season for Rogers and her second win of the year after winning the opening competition being the National Championships held at Westport in January.

Rogers’ win was not enough to hold off Millar for the overall NZ Grom Series title, a mere 10 points separating the two surfers. Talia De Silva (Whngrei) placed third in the final ahead of first-time finalist Ayla Gee (Rag).

Sev Tolhurst (Piha) claimed his first ever win in the Under 14 Boys Division. Tolhurst has toiled away as a young grom for four years and today it all came together as he went head-to-head with Jesse Frazerhurst (Auck). Tolhurst eventually got the nod scoring 11.0 to Frazerhurst’s 9.17. Overall series winner Sonny Lyons (Kaik) finished third in the final with Kentaro Mitchell (Ahipara) in fourth.

Lola Groube (Pau) claimed the Under 14 Girls Division with a 13.33 point heat total to defeat Poppy Entwisle (Chch). By way of her second placing, Entwisle managed to retain the overall series win by the narrowest of margins. India Kennings (WGM) placed third in the final ahead of Lani Frazerhurst (Rag) in fourth.

Surfers from Ahipara to Dunedin took part on the weekend including Under 14, Under 16 and Under 18 divisions with action taking place from 8am – 5pm daily.

The O’Neill Taranaki Grom Comp is part of the wider New Zealand Grom Series which includes the Billabong Grom Series, the South Island Connect Group Grom Series and a number of other individual junior events. It is the final event for the 2022 season.

This year’s event would not be possible without the support of O’Neill, Pelorus Trust, New Plymouth Surfriders and Surfing Taranaki.