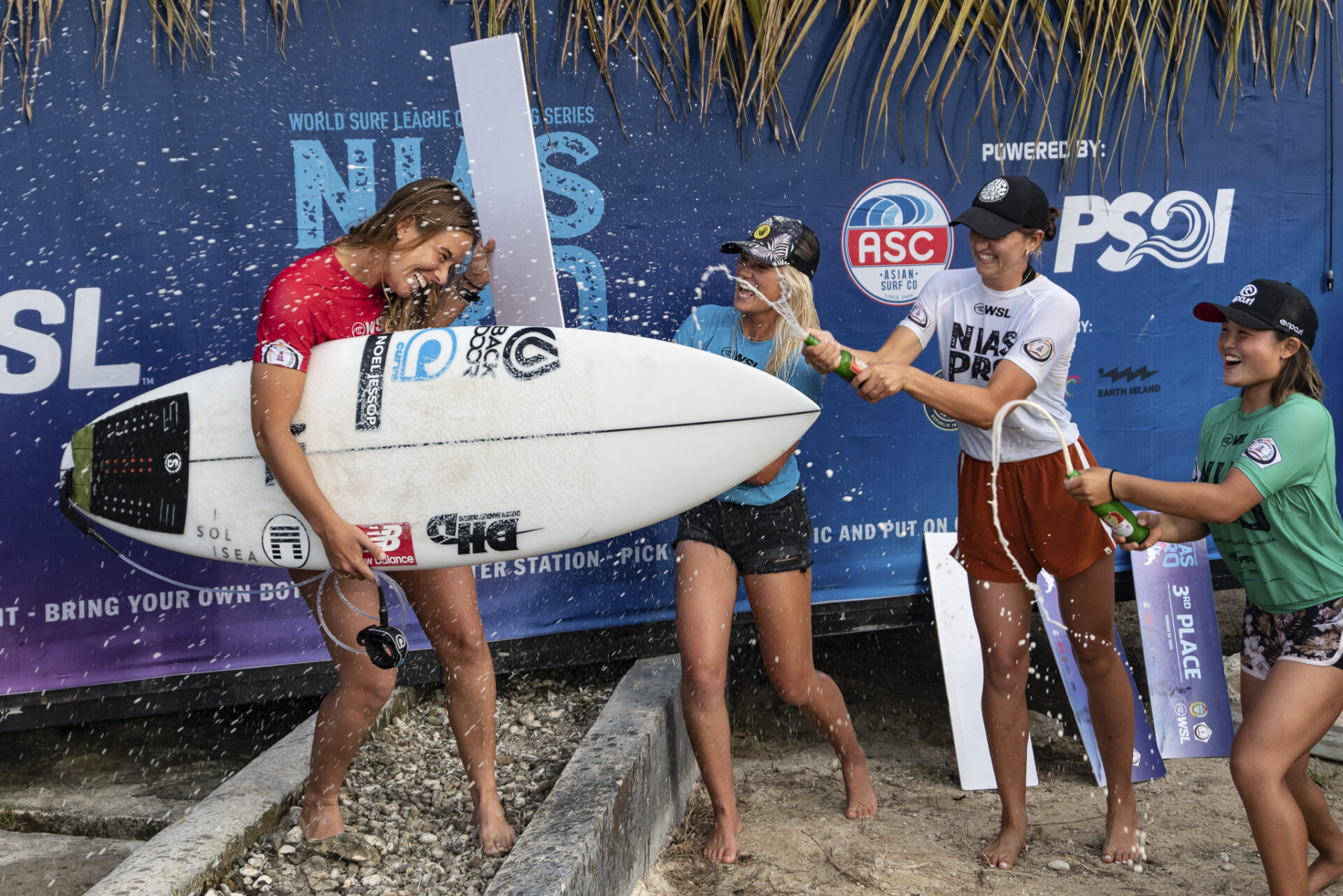 Paige Hareb wins the 2022 Nias Pro in near-perfect surf at Lagundri Bay, Nias, Indonesia. Here’s how she did it …

Paige has been competing on the World Surf League Championship Tour and Qualifying Series since 2008, yet her performance at The Nias Pro this past week has been her best ever. It culminated with a finals day performance that saw her contest three heats as she whittled the field down in pumping wave conditions.

“I like to think positive going into it, but there were so many good surfers here and the waves have been insane all week so anything could have happened,” Paige admitted afterward. “I’m really happy for the way it’s worked out. Hopefully all the kids back home see that Kiwis can win international events and it gives them a bit of inspiration. And hopefully Billy and I keep flying the flag high for the rest of the year.”

That Quarterfinal: Paige vs Kailani

But it wasn’t all going her way. In her quarterfinal, against local Indonesian surfer Kailani Johnson, Paige found herself sitting with a 1.77 and starved of waves as Kailani ratcheted up a 14.87 heat total with less than 10 minutes to play.

“Just thinking about that quarterfinal makes me nervous,” Paige laughs. “I was trying to stay calm and knew I had a hard task ahead, but also knew I could do it if the waves came. I think I looked at my watch with eight minutes to go and in my head I was like, ‘it’s now or never’. A wave popped up and I had to go no matter what just to get my first proper score of the heat.”

Paige attacked the lip hard twice to post an 8.50, but more importantly she kicked out right before Kailani who had taken the wave before her and so Paige was able to regain priority. It was a pivotal moment that speaks volumes for the experience of the 32-year-old.

“That gave me about three minutes to sit and hope another set would come,” Paige recalls. “Thankfully it did. It was the first big wave of the set and I knew I didn’t have time to pick and choose. I had to take it and knew I had to make it as well.”

“If I was ahead I probably would have tried to pull in and get barreled, but I knew I would get a score with two turns – I just didn’t realise I was so late on the turns – I could literally see the lip and barrel as I was coming down from the turns,” she laughs. “I just hung on I was so desperate to get the score.”

Paige’s third wave of the heat looked likely to go into the 9s with two insane under the lip turns on some of the most critical sections we’d seen all contest. The judges rustled up an 8.37 and Paige was on her way.

The Semi: Paige vs Kobie Enright

Her next foe was Aussie Kobie Enright and the two locked horns early with a couple of throwaway waves before nudging into the sevens.

“Kobie is a great surfer and I knew I would definitely need two good scores against her,” Paige explains.

But her heat prep was marred as the Indonesian heat and the fast-fire heats started to take their toll.

“The semi seems a bit of a blur, I actually felt a bit sick before that heat so really just went through the motions,” admits Paige.

Even in the dying moments of the semi with two of then highest scores locked in and a heat total of 15.03, Paige said she couldn’t relax.

“It’s very nerve wracking knowing someone could get barreled and get an 8-point ride at any minute,” she smiles.

Luckily for Paige that didn’t play out and she was into the final.

The final was a battle of youth vs experience, as USA’s Ella McCaffray took on the vastly more experienced Paige. Noting the judge’s fervour for barrel rides, both surfers tried to snag an early 9-point tube. Both fell and copped a solid Nias beating.

Ella was first to put a score on the board with a combination of turns to set the early lead. The regular vs goofy battle was on. As soon as Paige found a clean wall to exploit, she secured the better score of the exchange to get back into first position.

The American soon answered with a little cover-up to carve combo, but never got quite deep enough in the barrel to rival Paige’s highest score of 7.50. Paige then quickly backed it up with a 6.20 to put Ella under pressure halfway through the final.

“That was my plan: to take control and put the pressure on her early rather than doing what I did in my quarterfinal heat,” Paige laughs. “I actually started off badly, but she did too so it didn’t matter. I knew I just had to keep doing what I was doing to get even a couple of average scores on the board to be within reach. I knew she would be trying to get barreled, which was a bit scary because she got big scores for them in her other heats. I really wanted to get barreled, too, but they are so risky. I wanted to just get solid scores first.”

Paige put the final nail in her opponent’s coffin with two massive backhand turns and a near-perfect 9-point ride in the dying moments of the heat to secure the win.

“The last few minutes I had a feeling I was going to win, but I know anything can happen and it ain’t over until the fat lady sings,” Paige smiles. “So that last 9 – in my head I just wanted to try and go big, whether I fall and win, or lose. Luckily, I made it and it paid off.”

Paige’s stellar run through the Nias Pro, which saw her posting excellent numbers in all of her heats and dispatching some of the strongest surfers in the field, speaks volumes for her commitment to the sport. Certainly she has Olympic ambitions and perhaps that is how she is able to tap into a whole new level of performance, and, more importantly, bring it heat-after-heat.

“I’m liking my boards more and more and feeling more connected to them,” Paige offers. “Equipment helps a lot, which then rolls over to confidence. I had both of those this week as well as the drive. Now winning adds fuel to the fire for that drive, too!”

The 5000 points she earns in Nias puts her in the lead of the Australia/Oceania Women’s QS rankings, which go towards next years Challenger Series (CS). Paige has already qualified for the 2022 CS.

Paige’s win comes on the heels of Billy Stairmand making the final in the previous QS event in Indonesia: The Krui Pro, where he finished second. Combined with Daniel Farr’s solid performance at Nias (including supporting Paige’s campaign), Elliot Paerata-Reid showing outstanding form at his adopted home break and Saffi Vette rising in the ranks, Kiwi surfing is in good shape.

“Coming to Krui and Nias, I actually thought I would have a better chance and more fun at Krui with it being on my forehand,” Paige considers. “Even though Krui looked nice, it was actually quite a bumpy, tricky wave to surf. Nias, with the big wall, felt like Stent Road for me at home, so yeah, I just clicked with the wave better and got on a roll.”

“I’m so proud to be a Kiwi,” Paige offers. “It’s so awesome to be representing the flag internationally. And thanks to everyone for all your kind messages and support – it has been amazing and means a lot to all of us.”