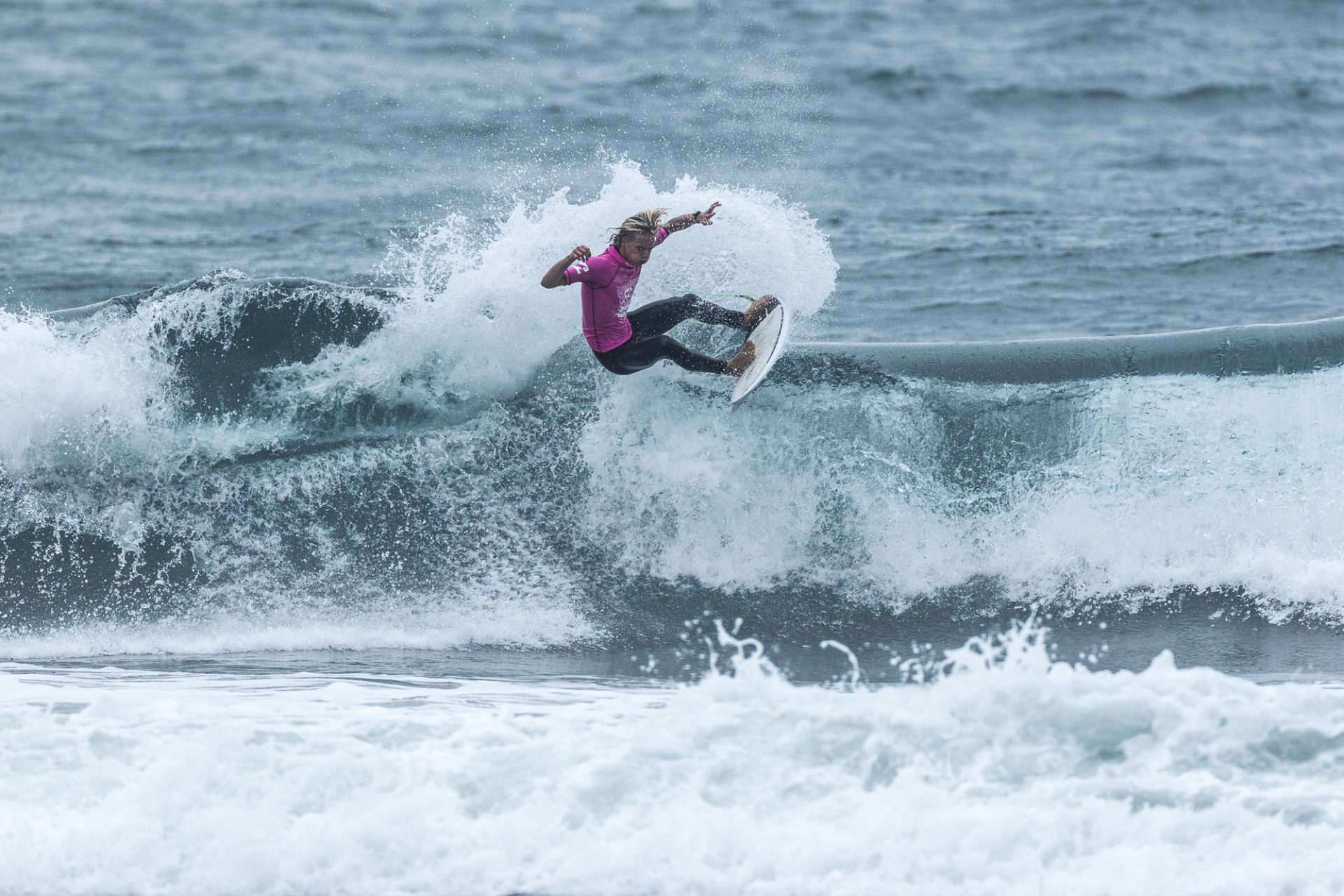 Six champions were crowned at the third and final event of the Billabong Grom Series presented by Oceanbridge event completed at Piha Beach, Auckland over the weekend with Caleb Cutmore, of Raglan, and Gabrielle Paul, of Piha, securing the premier Under 18 titles.

Titles went to Piha, Raglan, Christchurch and Mount Maunganui after a summer of surfing that also saw events held at Mount Maunganui and Whangamata. But it was Piha where the final scores were settled.

With adverse weather marching up the West Coast and set to slam into Piha on Sunday, the event was completed in one big day of surfing with Saturday producing solid 1.0m waves ruffled by light cross-onshore winds all day at the south end of Piha.

Cutmore finished off the series in style, with an event win, backing up his win at the first event and a fourth-place finish at the second. By the time the finals rolled around early evening, the tide had dropped and the Piha Bar was breaking providing the Raglan surfer with all too familiar lefthanders running down the beach which suited the goofy footer.

Cutmore finished with a 14.27 point heat total edging out Jack Lee, of Whakatane, who pushed him for the win posting 14.07 points out of a possible 20.

“I was mostly just wanting to surf at a high level throughout the comp whether I won or lost,” admits Cutmore after wrapping the series up at Piha. “To take the win was definitely a bonus.”

Finishing in fourth at Round 2 of the 3-round series must have certainly added to the pressure for Cutmore, but he shrugged it off.

“I wasn’t feeling too much pressure, I was just excited to surf Piha Bar. It is one of my favourite waves and I knew that if I surfed it well then the results would back that up.”

The Piha Bar also suited Raglan duo Kora Cooper, who won the Under 16 Boys Division, and his mate Jayden Willoughby who placed second in a high-scoring final. Willoughby’s runner up finish was enough for him to win the overall series.

Cooper was the form surfer of the weekend and peaked in the final dropping eight-point rides at will and comboing his fellow finalists within the first eight minutes. He eventually finished with a 16.8 point heat total in the final, enough to drag him up the series rankings, but just shy of the title.

Local Piha surfer Gabrielle Paul finished runner up to Raglan’s Kai Woolf in the Under 18 Girls Division, Woolf taking her second straight win of the series. However, Woolf’s absence at the first event meant that Paul claimed the overall title with her three finals berths in the series. Georgia Wederell, of Mount Maunganui, finished second overall with Woolf finishing third.

Ava Henderson, of Christchurch, and Anna Brock, of Mount Maunganui, were the most dominant surfers of the series with two wins apiece backed up by runner-up finishes in their respective Under 16 and Under 14 Divisions. The two girls claimed the overall titles with strong wins at Piha.

Young Piha surfer Bill Byers rounded out the winners for the final event of the series and with several upsets throughout the weekend, Byers jumped from fourth to first overall, leapfrogging second placed Navryn Malone (Rag) who dropped back to second.

We Rank The 10 Best Surfers In New Zealand Right Now