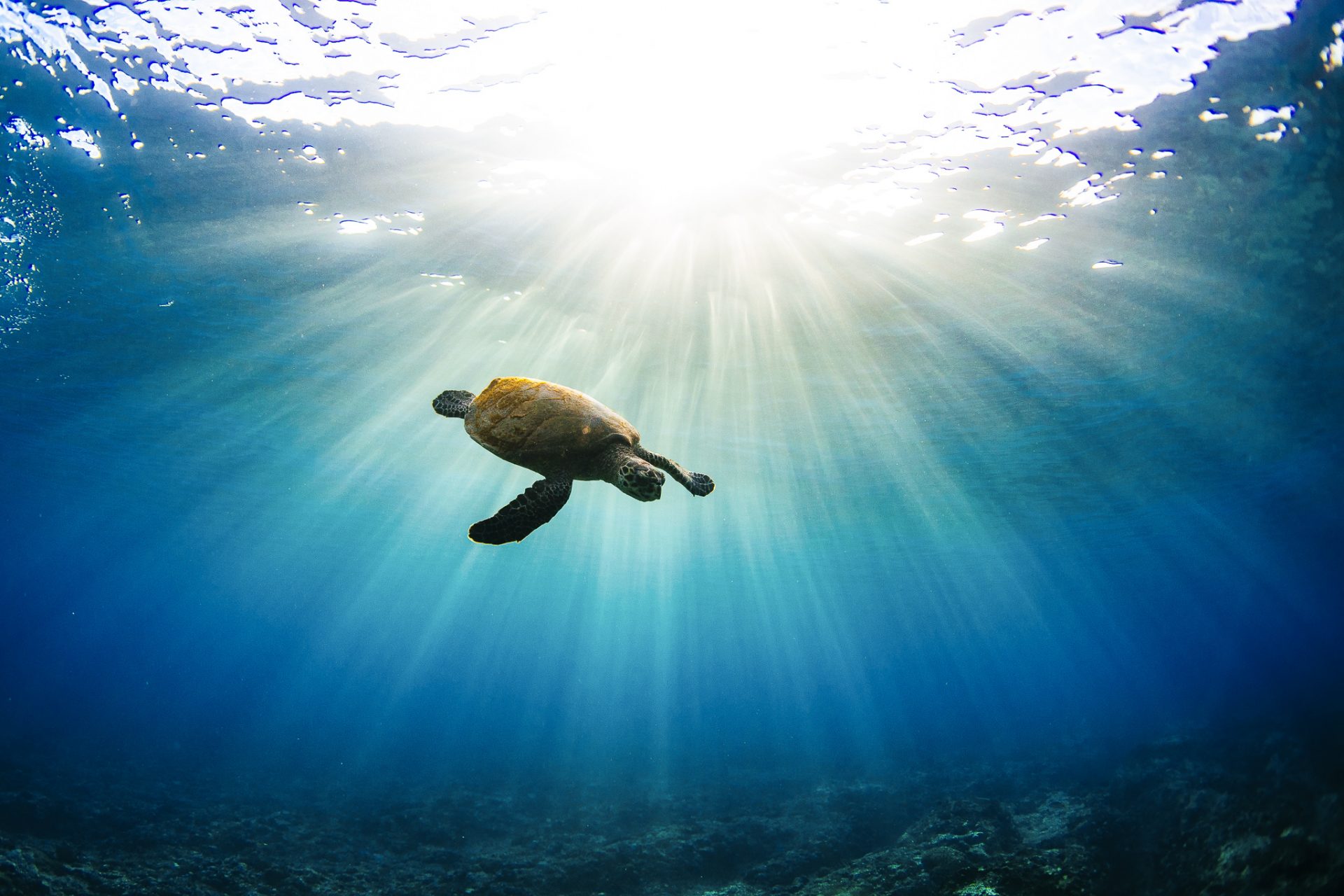 In an unprecedented move for a global professional sports body, World Surf League has today committed to becoming carbon neutral and eliminating single-use plastics by the end of 2019. This announcement adds further weight to the WSL’s existing ocean conservation efforts.

Those efforts include WSL Pure, its non-profit arm, which stands for Protecting Understanding and Respecting the Environment.

But let’s take a helicopter view for a moment: Surfing is not a sport and recreation with a great environmental track record. Our manufacturing and product miles are through the roof, packaging is exorbitant and often excessive and every single one of us drives thousands of kilometres each year chasing the promise of a perfect peak.

The climate crisis is well upon us, but the industry and surfers can’t just snap their fingers and change in an instant. The focus should no longer be on “where” we are mistreating the environment so badly, but “how” we are going to implement improvements. This announcement by the WSL, joins a chorus of other companies beginning to lead that shift in mindset. Look at Patagonia and their experimentation with sustainable wetsuit materials. Or even Quiksilver’s Repreve programme that turns 11 million recycled plastic bottles each year into fabric for its boardshorts. And every single pair of Billabong boardshorts available in Australia and New Zealand today is made from recycled materials.

Then you have a company like Rip Curl, which scored well in the 2019 Ethical Fashion Guide, published by Baptist World Aid and released in April this year. While 2019 was the first time the environment had appeared in the report, it didn’t factor into the overall score. Regardless, a deeper dive into the data reveals that Rip Curl landed B-pluses across the environment pillars. Patagonia scored A, Icebreaker topped out with A+ and Huffer was given special mention for its Take-Back Programme. It’s a policy that collects pre-owned down and puffer jackets and redistributes them to those in need, offering a $50 voucher towards a new Huffer Down Jacket as a bonus. Sure these companies still have work to do, but they’re heading in the right direction and that is worth celebrating … and getting behind. And WSL should be commended for throwing their hat over the fence.

The WSL sustainability commitments announced today are designed to inspire, educate and empower ocean lovers while addressing critical environmental issues. They apply to all WSL Championship Tour and Big Wave Tour events. We hope one day they will also stretch their tentacles into the realm of the WQS events.

“The WSL is incredibly proud to break new ground in sports in the urgent battle against climate change and ocean pollution,” adds WSL CEO Sophie Goldschmidt. “We believe it’s our responsibility to be ‘all in’ with our efforts to protect the ocean and beaches amid the devastating climate crisis we all face. We invite everyone who cares about the ocean to join us.”

The WSL is also launching a global marketing campaign and inviting members of the ocean community to make the Pure pledge to “Stop Trashing Waves” and join a worldwide paddle out on June 15 in honour of International Surfing Day, founded by the Surfrider Foundation.

“We believe it’s our responsibility to be ‘all in’ with our efforts to protect the ocean and beaches amid the devastating climate crisis we all face. We invite everyone who cares about the ocean to join us.”

Other leaders in the sport and the environment were quick to applaud WSL on its commitment.

“So stoked that the WSL is setting this amazing example. I hope all other professional sports follow their lead – and soon!” offers Dr. Ayana Johnson, marine biologist and founder of Ocean Collectiv and Urban Ocean Lab. “Where governments fail to lead, business can and should step all the way up to address our intertwined climate and biodiversity crises.”

The Science That Spurred The WSL To Action

Because of increased global temperatures, the ocean has absorbed more than 90 percent of the excess heat in the atmosphere, which causes more frequent and intense storms and dangerously rising sea levels.

Approximately 30 percent of the carbon in the atmosphere is absorbed by the ocean, causing acidification that harms coral reefs and other marine life.

Plastics break down into small microparticles that are ingested by marine life, ultimately entering the food we eat and water we drink.

How The WSL Will Achieve Its Goal

Goal 1:
Becoming carbon neutral globally by the end of 2019, including at WSL Championship Tour and Big Wave Tour events.

• The WSL is offsetting its carbon footprint by investing in and supporting projects such as REDD+ (reduce emissions from deforestation and forest degradation) and VCS (Verified Carbon Standard) certified carbon offset projects that have a focus on restoring and protecting natural ecosystems and renewable energy ecosystems and are based in each of the WSL’s regions. For example:

▪ In Asia Pacific: The Katingan Mentaya project in Borneo is a REDD+ peat swamp forest that fights deforestation from mining and palm oil plantations. VCS and Triple Gold Certified project recognized for its positive social impacts (34 communities; 45k people) and biodiversity (5 Critically Endangered, 8 Endangered, and 31 Vulnerable species).
▪ In South America: The Santa Vitoria do Palmar and Chui wind farm in Brazil (a United Nations Clean Development Mechanism Certified Emission Reduction project) which powers 400,000 homes, and the ceramic factories of Argibem, São Sebastião, and Vulcão which run on renewable biomass instead of native timber from endangered and unique Brazilian ecosystems, and also has positive social impacts in the community schools.
▪ In Africa: The Maasai Wilderness Conservation Trust located in Kenya, which supports the Chyulu Hills REDD+ project to promote climate change mitigation and adaptation, restores biodiversity and creates alternative livelihoods.
▪ In North America: Almost 24,000 acres of Redwood forest protected from traditional logging to store carbon and safeguard endangered wildlife (Coho Salmon and Northern Spotted Owl) in the coastal watersheds of the Garcia River Forests in Mendocino County.

• The WSL will also reduce its carbon footprint by regionalising its operation, limiting non-essential travel and implementing policies to reduce carbon emissions at its offices.
• The WSL carbon-offset program is calculated and curated in partnership with STOKE (Sustainable Tourism & Outdoors Kit for Evaluation), a certification organization with standards built specifically for surf and mountain tourism operators, destinations, and affiliated events.

• The WSL is specifically targeting items related to food-service like bottled beverages, cutlery, and cups, as these single-serve items are often not recyclable.
• The WSL already provides clean drinking water stations for fans to refill their bottles and choose compostable materials where possible for food service.

Goal 3:
Leaving each WSL Championship Tour and Big Wave Tour stop better than it was found.

• The WSL is reducing its event footprint and developing a financial grant program to commit money to local projects and non-profits that are working to safeguard our coasts and protect these habitats.

“I think it’s a great stance and an important message to send to people around the world. The ocean is vital to everyone, for food, for oxygen and especially to us surfers. I think everyone should make it their priority to care about this issue and make changes in their lives to help.”

In a world that is increasingly subjected to poor leadership, it’s nice to think that at least in the surf industry we’re still grounded enough to make great leadership decisions. Take a bow WSL … and to all those who play a part, no matter how small, on this journey back to balance.

10 Moments From The South Island Champs